but the sea kept turning blank pages looking for history. ON THE STATE OF REFUGEENESS. at SAVVY Contemporary

in News Articles 2013
Share on facebook
Share on twitter
Share on email
Share on whatsapp
A project by “To Whom It May Concern”* & Anna Jäger.
You are cordially invited to join SAVVY Contemporary this Friday, 22nd Aug. and Saturday, 23rd Aug. (10am – 7pm) at SAVVY Contemporary to deliberate on the “State of Refugeness” in our present times. Together with ‘refugees’, activists, philosophers, psychologists, artists, architects, lawyers and even the police we will try to scrutinze issues of humanitarianism, politics of space, crafting, law/lawlessness, D-/Remonstration and love! We are in the age of refugeeness and we need to understand what that concept, space and time could be… 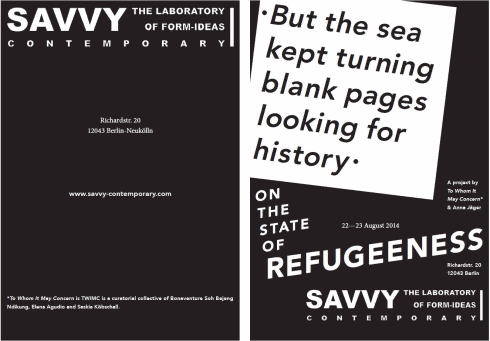