in News Articles 2013
Share on facebook
Share on twitter
Share on email
Share on whatsapp
At a glance, Seán Slemon’s new works at Mariane Ibrahim Gallery might seem a bit disconnected from each other: a trio of aquatints, a slanted ray of polished steel panels and two tree remnants covered in gold foil. One of the trees is suspended near the gallery entrance, more or less parallel to the floor, and makes such a grand impression that the rest might seem like afterthoughts. There is, however, a unifying logic to it, one that is enriched by the ambiguity of the content and optical tricks that Slemon plays in each individual work. 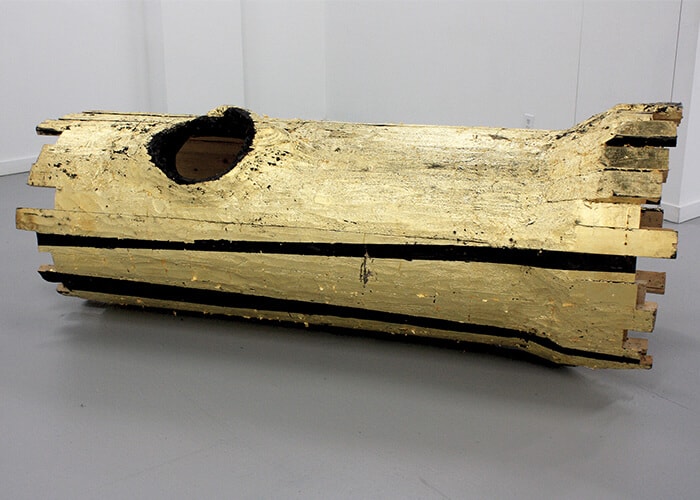 Seán Slemon, Pine Tree, 2011. Pine 2x4s, gold leaf, ribbon, 91.4 x 228.6 x 91.4 cm. All images courtesy of Mariane Ibrahim Gallery, Seattle.
On closer examination, what appears to be a large and hollow trunk, titled Pine Tree, sitting on the floor, is actually a recreation made with two-by-four planks, joined and carved to produce an uneven, knotted surface. Most of it is covered with gold foil, but large strips appear to be charred. These strips are coloured with black ink that you can see has spattered the inside of the ‘tree’ wherein all the illusions break down. The suspended tree, titled In the Black / In the Red: a balancing act of value, appears to be held aloft by dozens of black and red ribbons securing its branches to the gallery walls. The physical impossibility of this might register unconsciously, even if one doesn’t immediately react to it, and the effect is uncanny. Two subtle cables attached to the ceiling actually do all the work, allowing the tree to seem strangely weightless with its flaky skin of gold.

Seán Slemon, In The Black/In The Red: A Balancing Act of Value, 2016. Indigenous local dead pine tree, gold leaf, red and black satin ribbon. Site-specific installation, 457 x 182 x 182cm.
Those familiar with Slemon’s work will recognise these techniques. He has done similar installations before and some of these trees have ended up sawed into discs and placed in boxes; from dead, mundane objects to a rarified vision and back to a more mundane form, still gilded, bearing the evidence of this ritualised transformation. This ritualisation is now part of one’s understanding of the work – Slemon is not trading in mere novelty or commenting on commodities. By repetition, he points to the human tendency to decorate and venerate, how the former may lead to the latter, and how what is precious becomes holy. There are obvious connections to the gilding of religious icons and relics, but in the white space of the gallery crossed with red and black ribbons (all alchemical colours), the conversion of hyle into gold can imply other, more esoteric concepts as well.
The layers don’t end there. In the context of an art world where added preciousness through materials rather than content (or genuine style) are common tricks used to beguile viewers, one would be rightfully wary of Slemon using this trick, if one stopped there. His other, less ostentatious works clarify this larger philosophy and unity: the play between the tangible and intangible, especially light made material. The austere aquatints capture changing patches of light on a watery surface, recalling works by other artists who marvel at light in flux, especially Uta Barth. However, the deliberate mark making and soft monochrome of the aquatint technique produces a different effect entirely, one that gives the light a physicality on the paper as negative space. As a triptych, the expanding breadth of the light seen when the images are read left to right may imply the passage of time, albeit an unclear one. Perhaps the light will only continue to grow and expand, not simply fall off the edge with the passing of the sun. As with the other works, there is room for ambiguity when we limit our assumptions.
The slant of reflective metal panels on one wall, simply titled Light, mimics the shape of light passing through the panes of a long window. It pales in comparison to past work that has better captured the effect of light slanting through windows with polished and weatherproof steel. Those have been large public works, however, impossible to show in this gallery. Even though it is the least impressive offering in ‘Captured,’ it again reflects Slemon’s core attempt to capture the luminous, fleeting and immaterial in a solid form in a more immediate and accessible way. 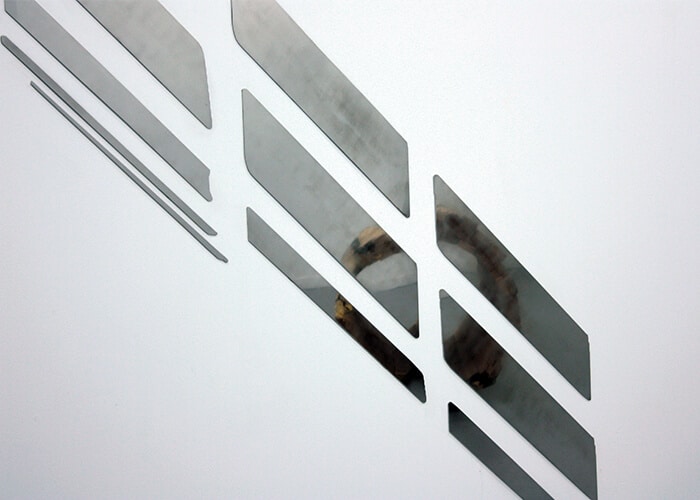 Seán Slemon, detail of Light, 2016. Wall mounted laser cut stainless steel, 307 x 254 cm.
With just a few pieces and a modest range of media, Slemon makes a space for meditation on fundamental forces and ideas: light, ritual, the sacred, transformation. Despite how flashy the gilt trees may appear, the gestures remain relatively simple and serve as a critique of the crass commodification of resources, not a cynical ploy for attention. But it would be a mistake to limit one’s reading to a merely social or political commentary. Slemon’s real dialogue is with pure phenomena, between the absolute and the ambiguous, and it’s a delight to be party to it.
T.s. Flock is the visual arts critic for Seattle Weekly and Vanguard Seattle. His work appears in regional and international publications, with a focus on visual and performing arts.
Seán Slemon’s ‘Captured’ was on at Mariane Ibrahim Gallery, Seattle, from 7 April – 8 May 2016