in News Articles 2013
Share on facebook
Share on twitter
Share on email
Share on whatsapp
“The terms ‘Africa’ and ‘African diaspora’ appear to sit neatly side by side, certainly when it comes to genre categorisations in contemporary art. Whole institutions are devoted to the very subject, such as MoCADA (Museum of Contemporary African Diasporan Art, New York). In the USA, it is the institutions devoted to African American art that have taken the lead in engaging with African contemporary art. This makes sense on many easily apprehended levels: shared (racial) history, similar histories of oppression and the struggle against it. While the relationship is very real and important, it defies the ideas of category merge, in which all segments are presented as part of a catchall,” writes Valerie Kabov in this positioning piece for the latest installment of ART AFRICA, ‘The North American Issue’.

Brandon Coley Cox, M-B (G)riot or If Ya’ll Really Knew, 2014. Handmade paper, string, glitter, acrylic, mica flakes, brown glittery mesh fabric, flashe, acrylic dispersions and powdered tires on gold-coated black linen, 134.6 x 139.7cm. Image courtesy of the artist.
Given the pressing and important challenges that contemporary art sectors face on the continent, what is more valuable is a robust conversation recognising the richness and diversity, not just between Africa and the diaspora but also within Africa and within the diaspora. Unity founded on the terms dictated by concerns more to do with the art market and channels of money in the art scene is not a strength. Moreover, allowing others to set the terms and the parameters of the conversation defeats the goals of a genuine, flowering contemporary art scene on the continent, one that is guided by self-determination and focused economic and cultural sustainability.
There are possibly as many (and as varied) African diasporas as there are countries and cultures in Africa. However, it is possible to speak about two very broad categories. The first being the historical diaspora, with a centuries-old throwback to experienced existing exclusively in the diaspora. Culture and identities were (and are) forged through this shared experience, which includes a merging with and contribution to the building of identities in countries of the New World such as the USA, Brazil, the Caribbean and so on. Culture, history and identity play crucial roles in forging worldviews and – more importantly – in shaping contemporary art practices. In this context, category merge clouds the importance of different concerns that both African and African-American artists deal with – especially in the wake of important issues such as the race discourse in the USA – while many African art scenes struggle to lobby their governments to support the arts through establishing international-quality art education, collecting institutions and industry infrastructure. 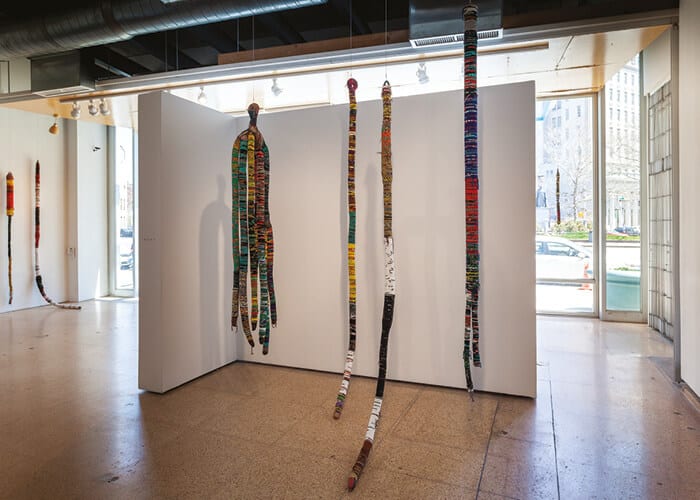 Leonardo Benzant, installation view of ‘Paraphernalia Of The Urban Shaman,’ at Aljira, a Center for Contemporary Art (Newark, NJ), 2012-2016. Image courtesy of the artist.
Even a tiny survey of African-American art practitioners reveals that there is no uniform or necessary connection between historical African diasporan art practice and African contemporary art. For curators like Dexter Wimberly (find interview here) engagement with African artists is not based on “ethnic background [but on his interest in] …economics.” He sees that unifying all “black art” under one umbrella is a “categorical generalisation” and a highly problematic one, given the significant differences. For an artist like Leonardo Benzant, whose work is rooted in engaging with and recapturing spirituality and traditions of his forefathers who came to the Caribbean as slaves, Africa is a uniquely rich and historical place that provides an enormous wealth of inspiration, without the need to directly engage with Africa today. For an artist like Brendon Coley Cox, contemporary African art opens up opportunities for learning and inspiration. His view is that African contemporary artists have more freedom of expression, having not been subsumed bythe market infrastructure in which he operates as an American. As he said in a recent interview, “Artists who respond to/ give nods to certain conditions (European structures) may be presented more in the mainstream.” Cox also comments on the strength of cultural identity and spirituality of artists like El Anatsui, characteristics that are not contingent on issues of identity politics. These important and enriching conversation points will be lost if we don’t value and validate the diverse natures of the two art scenes.
The second broad category is the contemporary African diaspora that has emerged post-colonially and includes the large number of artists currently residing in Europe and North America. Intellectually, however, this diaspora – especially in the first generations – has its own unique emotional and traumatic signifiers, which immediately differentiate the work of diasporan artists from those who remain at home. They go from being part of a majority culture to being part of a minority (with all that entails), from feeling at ease within their society and context to struggling to learn, from responding to their environment to being at one with it, to looking at their past through the lens of the present and looking at their new society as an outsider. 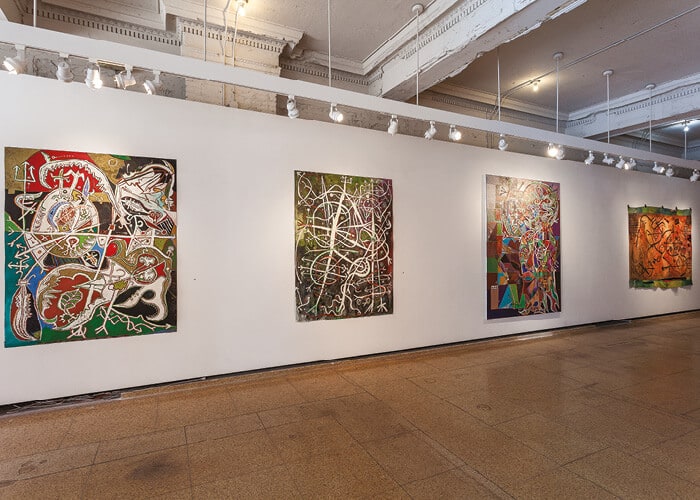 Leonardo Benzant, installation view of ‘Paraphernalia Of The Urban Shaman,’ at Aljira, a Center for Contemporary Art (Newark, NJ), 2012-2016. Image courtesy of the artist.
In an article titled ‘African Horizons: Why the Armory Show is focusing on Africa,’ The Economist noted that “Only eight of the fourteen artists (sic: galleries) featured in the special exhibition at the Armory, ‘African Perspectives’ are from galleries in Africa. The rest are based in Paris, London, Berlin and Seattle. To Julia Grosse and Yvette Mutumba, the curators of ‘African Perspectives,’ this was a more accurate way of reflecting the world that many contemporary African artists now inhabit. How to classify someone who is born in Lagos, splits their time between there and Brussels, and does residencies in Hong Kong and New York? Everyone lives more globally now; artists are no exception.”
It should be further noted that three out of the ‘African’ eight were from Cape Town. This is absolutely not the paradigm, which represents the vast majority of artists on the continent. Most do not have independent means to travel and their African passports alone make independent travel difficult, if not impossible, as most visa applications require an invitation to specific projects and some form of sponsorship or endorsement. This paradigm, however, does describe the minority of artists with dual citizenship, independent means and international gallery representation – at least for those who are interested in and able to play along with foreign funding.
In particular, this immediately privileges diasporan artists and artists with the means and opportunity to travel and become diasporic. It also suggests to the new generation of African artists that leaving is the best way to advance your career. Currently thousands of artists living on the continent and choosing to remain on the continent are disadvantaged, if they want to pursue practices not attuned to funding concerns, or don’t have the means or the skills for writing grant applications, or ease of access to the internet – none of which hampers someone living in the diaspora. 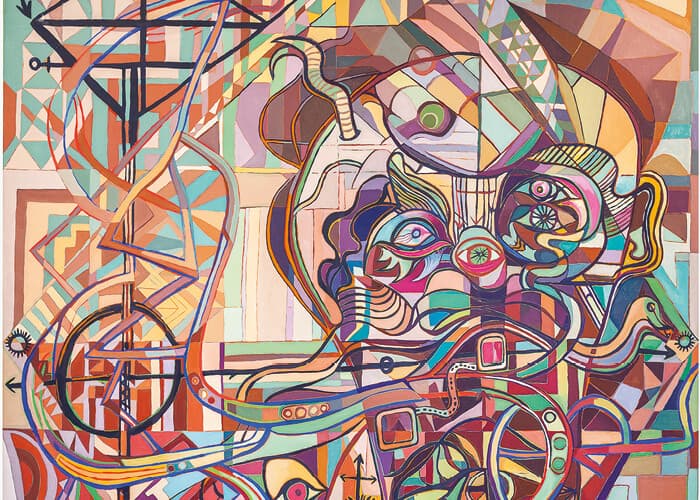 Leonardo Benzant, detail of Subterrestrial African Magik, 2016. Oil on canvas, 190.5 x 243.84 cm. Photograph: Chuka Chukuma. Image courtesy of the artist.
In her interview with Studio International, Eva Langret – exhibition manager for Tiwani Contemporary, one of the major Africa-focused galleries in London – made an important point “I think the solution is self-determination in curatorial practices: as more and more exhibitions are produced in Africa, by African curators, the need for the rest of the world to ‘get it right’ will become redundant. But until we get there, there is still work to do.” Ironically she immediately confirmed just how much work there is to be done when, further in the interview, she listed the new generation of African curators who are making the change, all of them resident in the diaspora.
While we celebrate the successes of all Africans everywhere, it is also important to keep sight of the issues that are the major priorities in building up art sectors on the continent, the mandate for achieving which belongs first and foremost to practitioners who live and work there. The push to blend into the international market and art scene creates a blur, in which the available platforms and opportunities serve to amplify diasporan concerns and cultural imperatives over and above those of the entire continent. Once we redress the imbalance, we will have a conversation among peers and a synergy in partnership, which is empowering to all.
Valerie Kabov is an art historian with a focus on cultural policy and cultural economics. Her research, writing and educational practice ranges from interculturality and globalisation, emerging art sectors and sustainability as well as art market analysis. She is the Co-Founder and Director of Education and International Projects at First Floor Gallery Harare, Zimbabwe’s first independent, international, contemporary emerging artist led gallery and educational space.
This article was first published in the June 2016 edition of ART AFRICA vol.01, issue.04, ‘The North American Issue’.