Centre for the Less Good Idea

An interdisciplinary incubator space for the arts

“A safe space for uncertainty, doubt, stupidity and, at times, failure.” 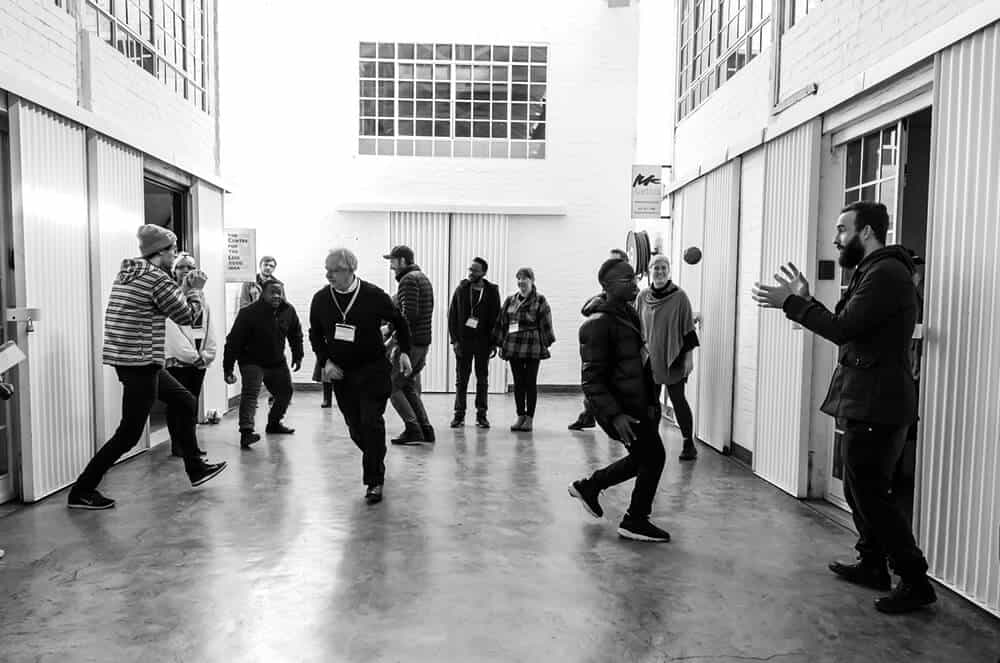 Season Two Play, 2017. Image courtesy of the Centre for the Less Good Idea.

Premised everywhere and nowhere, but homed in Johannesburg’s Maboneng precinct is the Centre for the Less Good Idea. A mini-festival with no mandate regarding content or quality, it features dance, visual art, theatre and everything in between. Curated by professionals who are its gatekeepers, it’s born of a perceived need on the part of William Kentridge to give back to the arts community and is rich with the headiness of experimentation. And as the three curators for the Centre’s forthcoming second season in October demonstrate, the liberating energy is contagious.

Digital artist Tegan Bristow says being an invited curator for the Centre is keeping her on her toes. She‘s talking not only of the skills and history she offers the Centre, but also of her forays into choreography and poetry. She’s on board alongside choreographer/performer/director/voice coach Nhlanhla Mahlangu (38) and has invited youth guru Jamal Nxedlana.

Durban-born Nxedlana (32) studied fashion design at Durban University of Technology, before he moved to London to develop as a stylist. It was a short leap for him into several disciplines, from photography to writing. Curatorial energies are central to much of what he does, and balancing an artists’ collective called Curse with a youth-focused platform called The Bubblegum Club, as well as having a fashion label called Miss Shape on the back burner, keeps him relevant curatorially.

“Clothing led me to performance and visual art,” he says. He gravitated to Johannesburg after his London visa expired. “London’s a cut throat city, super difficult to survive. I came back at the beginning of 2010 with that kind of energy and with an urge to position myself in the art world.”

To this end, he went on a voracious spree of art events: “It was about taking in everything I could.”

And then suddenly, he was there. “Because the scene is small, visibility comes quickly.” But he knows that in the art world, there are many producers but few platforms. His forays into technology were key and enabled Bristow to notice him and invite him to co-curate with her and Mahlangu.

Having been a significant creative presence in the first season, Mahlangu is raring to go for the next. Bringing a wide range of skills to the project, including the iscathamiya group Phuphuma Love Minus, with whom he has collaborated since 2008, he’s commissioned Lulu Mlangeni from Vuyani Dance Theatre, Sonia Radebe from Song and Dance Works and independent performer Theresa Phuti-Mojela to collaborate this season. He’s vague about what roles these dancers will perform, but that’s what the Centre is about: anything can happen.

Always a singer, Mahlangu came into his own at the height of apartheid. Born in 1979, he was a teenager “at the time Mandela was released, the time when the IFP and the ANC were fighting, the time where the white police were making sure there is instability, the time when Adriaan Vlok was arming the IFP with R5 rifles to create the so-called Third Force …” he speaks of the horror of the preponderance of death all around him.

Unaddressed trauma and unacknowledged dyslexia were stumbling blocks for him, but it was implicit knowledge that he had ability that gave him the courage to demand a place in Moving Into Dance Mophatong after he was accepted in principle, but rejected because he didn’t have matric. Today, he and his partner, Radebe – who is this year’s Standard Bank Young Artist for Dance – are considered the royal couple of contemporary South African dance.

Born in Limpopo Province, Bristow studied painting at Grahamstown’s Rhodes University in the late 1990s; her turnkey moment was accidental. “I had an early morning African history class. By mistake one day, I went to the wrong venue, and ended up in a computer science 101 class where they were making games. It literally changed my life.” To this day, digital interactivity still gets her pulse racing. Four years after founding and directing the Fak’ugesi African digital innovation festival, and ten years teaching at Wits, she’s not looking back.

The challenge is complicated: “The digital scene in South Africa is undeveloped,” she speaks of the relationships which have developed through the people she’s brought in, including computer programmers from Alt-Reality, Rick Treweek and Gareth Steele who will collaborate with Kentridge and others to create the Invisible Exhibition – a counterpart to the Blind Mass Orchestra – a headline acts at the Centre’s February season.

Another project headlining Bristow’s contribution to the Centre is work made with theatre practitioner Mwenya Kabwe who has written several prompts about South African cities. “One that really stayed with me was a rainy afternoon in Johannesburg with jacaranda blossoms falling.” Bristow will work with Radebe and contemporary composer Cameron Harris in a four-layered interactive soundscape to bring this prompt to life. “It is like a performed poem,” she says.

Is the Centre producing art that will shift the boundaries of art in South Africa? It’s difficult to say at this stage. One could cite Gregory Maqoma’s work Cion, a direct product of season one, but the stability of the platform is yet to be proven.

The Centre’s animateur Bronwyn Lace describes the momentum as something you’re sometimes driving, and sometimes you feel is driving you. She adds “The luxury of following our intuition and recognising the serendipitous cannot be undermined.”

She speaks of the collaborative energies that technological teams Dondoo Studios and Alt-Reality have enabled the use of a virtual tool, Tilt Brush, which has facilitated the core of the Invisible Exhibition.

Drawing from her experience of digital arts festivals she’s visited in Europe and Africa, Lace acknowledges while the digital ideas are fascinating, the final works can be underwhelming, from the outset.

“Will we better this in the Centre? I don’t know. We’ve learnt many lessons in the Centre, including that one formula that resonates and works in a particular instance doesn’t translate to the next. Sometimes the most energy expended is in gently dissembling or in violently shattering the habits artists – on all levels – have. But habits are powerful and safe.

“There’s speculation about the area’s safety,” she adds. “But the city is shifting. Maboneng’s borders are more blurred than ever – there are many developers investing in this side of town.” But the biggest lesson, however, is in simply trusting the universe.

Robyn Sassen is an art critic, writer and blogger.