Changing with the times: Transforming the acquisition policy of the Unisa art collection

The Unisa Art Gallery was established in 1961 in conjunction with the Department of History of Art and Fine Art, and has developed over the years to become a significant space in the South African art industry. Unisa Art Gallery is a university art gallery under one of the oldest universities in South Africa and one of the largest universities in the world. Unisa’s roots date back 145 years when it was initially called the University of the Cape of Good Hope. The gallery is home to a permanent art collection, and it hosts regular exhibitions of relevant contemporary local art 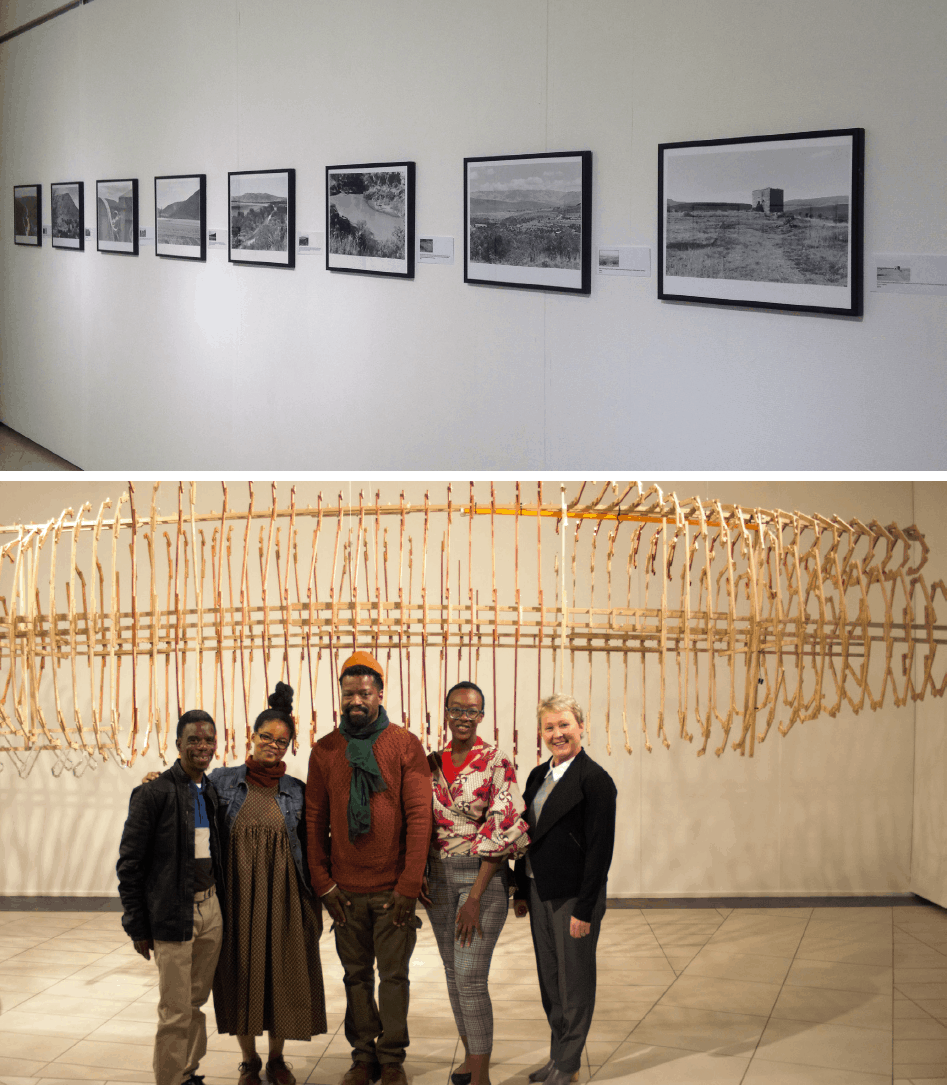 TOP TO BOTTOM: The Unisa curatorial team at the Unisa Art Gallery; (left to right) Jacob Lebeko (Assistant Curator), Witty Nyide (Education Office), Bongani Mkhonza (Curator), Kutlwano Mokgojwa (Curatorial Assistant and Logistics Manager for the Javett Art Centre (University of Pretoria). Kutlwano was invited as a guest speaker to Open the August (Wathint’abafazi Wathinta Imbokodo) Art Exhibition), Prof Bernadette Van Haute (Chair of the Department of Art and Music, also the Chair of the Gallery Committee). Cedric Nunn’s most recent body of work, Unsetteled: 100 years was of resistance by Xhosa against Boer and British, is an example of artist portfolios that have been acquired over the years in the Unisa Art Collection. Nunn’s limited edition portfolio consists of Silverprints, 40 x 50cm each. All images courtesy of the Unisa Art Gallery.

The gallery not only serves as a traditional gallery and exhibition space but it’s also a place of community engagement, learning and research. Art tours and workshops are offered to visitors, staff and students to get the most out of their visit. The gallery mainly hosts student’s exhibitions and a variety of curated exhibitions every year, focusing on the diversity, evident in contemporary art in the country as well as other relevant aspects of the arts. The gallery is also a hub for academic research with its publicly accessible online inventory of catalogues and permanent art collections. Thus, the Unisa Art Gallery is proclaimed as one of the most-unique public collections in South Africa.

The Unisa art Collection features established and emerging South African and African artists working in a different medium of expressions like painting, ceramic, photography, multi-media and sculpture. According to Prof. Stephen Marcus Finn “the academic acquisition of art today is not quite what it was centuries ago or even fifty years back when Unisa started its collection. Today art embraces more than painting and sculpture and has, essentially, become an elastic term that considers various media and techniques.

Historically, the collection was accommodated in the space that used as an old Unisa Library. The collection has since grown to be one of the most significant in South Africa and is privileged to be in possession of a most relevant collection of largely contemporary South African art. 2010 marked a very significant point in the development of the Unisa Permanent Collection when it finally moved into its first state-of-the-art storage facilities in the Kgorong Building, Preller Street, Unisa Main Campus. What was significant about this building was the fact that it was built at the entrance of the Unisa campus in Pretoria. Therefore, this strategic position provided and continues to provide the public with direct access to the Gallery and the collection.

“…the collection is presently aligned to the developmental vision of the University of South Africa with its research and educational roles and the African agenda in the context of both transformation and globalisation.”

Guided by the acquisition committee, under Bongani Mkhonza’s curatorship, the collection re-envisioned its acquisition policy as informed by the new vision of Unisa, “towards the African university shaping futures in the service of humanity” the acquisition policy was reviewed to include the collecting of African art from the wider African continent. The transformation of the acquisition policy like any other critical change was complex and needed a collective involvement of academics and the art community at large. Researchers Bill Jenkins, Michael Hill and Peter Hupe acknowledge that the policy process is complex and that policy decision can be contradictory or have unexpected results. Therefore, the transformation of the Unisa acquisition policy took into consideration those dynamics, especially on how power relations produce dominant discourses and marginalise others.

Prof. Stephan Marcus Finn also notes that it is a somewhat complicated matter to decide on what precisely African art is. Primarily, African art is art by people who live in Africa. We should not concern ourselves with media or themes, techniques or typicality when determining this. If we do, then we would be prescriptive, which would impact negatively on creativity as well as both artistic and academic integrity and independence. To substantiate, Finn, brings afore an example of Marlene Dumas, who was born in South Africa, and has lived in Amsterdam for over thirty-five years. How could any of us not see her as a South African artist? The obverse would be Roger Ballen; born in New York, he has lived in South Africa for close to forty years. We could hardly dismiss him as not being an African artist. It is far better to be inclusive rather than discarding the talented from the Unisa collection: it bespeaks of situational elitism.

Finn’s reflections probe us to think critically about the simplistic notions of concepts that are employed in acquisition policies. For Finn, the question of being African gets even more complex than this. He questions whether an Afro-American who has never been to Africa, an African Artist? I would say not. Is someone in Australia who paints a picture of an African scene an African? Once again, no. If there is difficulty in accepting this, consider the following: a Zimbabwean who draws a picture of the Eiffel Tower is hardly French. 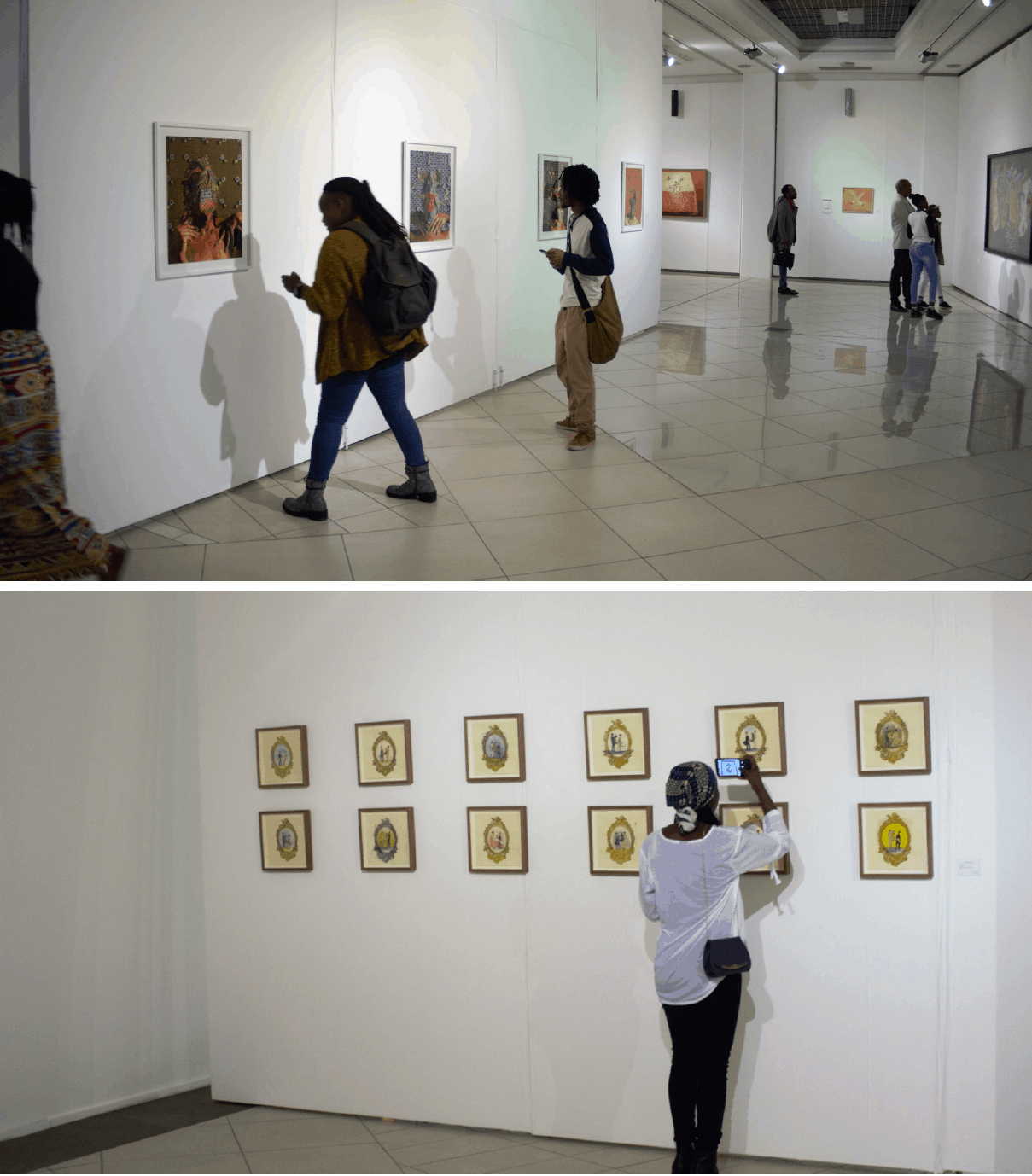 TOP TO BOTTOM: Visitors view the works at the Unisa Art Gallery. Gallery visitor viewing Ann Gollifer’s work, Fairytales I – XII (2017). Set of 12-Each unique. Watercolour and monoprint on paper, 22.5 x 22.5cm (each).

Collecting from the whole continent also necessitated a bigger acquisition budget. Carol Brown points out that, “whilst many galleries/museums in the country have had severe budget cuts for acquisitions, Unisa has been fortunate in being able to purchase significant acquisitions (funded through the University, specifically from the Dean of Schools budget) over the last few years”. Armed with its new vision, the collection continues to enjoy healthy annual acquisition budget support from the Unisa Management. Another expectation from the sponsors of collection acquisitions is the question of investment. Fortunately, this is not the Unisa Management’s foremost objective for supporting the acquisition. Unlike most private collections, Unisa does not necessarily acquire art for monetary profit. It is not a commercial entity. According to Finn, its main function is to educate and the art acquired must always have the possibility of inspiring viewers, students and, of course, their lecturers. To date, the collection has developed significantly and has a register of contemporary African art by artists such as Sammy Baloji, Joel Mpah Dooh, Tuli Mekondjo, Letso Leipego, Kimathi Donkor, and many more.

In summary, the collection is presently aligned to the developmental vision of the University of South Africa with its research and educational roles and the African agenda in the context of both transformation and globalisation. Bongani Mkhonza currently heads the Gallery and Collection as the curator, with assistant curator Jacob Lebeko, Ntombikayise Mbatha as an administrator, and Witty Nyide as an Education Officer. The Art Gallery is part of the Art and Music Department. The Art Gallery Board, chaired by Prof Mpako (School Director, College of Human Sciences), is the main acquisitions and policy-making organ of the art gallery. The Gallery Committee, chaired by Prof Bernadette Van Haute with Bongani Mkhonza as Secretary, oversees gallery matters and recommends artworks to the Gallery Board for acquisitions.