Christiane Lange: The exhibition focuses on the story of two South African women, Rose and Thozama. Could you tell me the story of these two?

Tanya Poole: I teach at the dojo (a place to train in Karate) and these two women came in together to enroll in karate for the first time. Rose is a thirty-eight year-old middle- class white South-African, who is a Doctor of Science at Rhodes University. She wanted the exercise. Thozama, on the other hand, is a twenty-eight year-old local from the Eastern Cape, who is quite religious. She had been through some trauma and had decided to take on karate as a form of self- defense. I saw that they had a friendship but I didn’t know their relationship. I later found out that Rose employs Thozama as her children’s nanny. This is a very typical South African relationship, and yet they came to the dojo together. They became very physical, aggressive and intimate all at the same time. I found this fascinating.

It’s not the first time that karate and the idea of women fighting shows up in your work. What is your personal experience with karate?

In the beginning I was intrigued by the notion of violence, aggression and conflict within oneself. Over time, I realised that itwas just a physical embodiment of cognitive dissonance because every interaction in karate is also an interaction with the self. It was a way for me to start playing those things out. 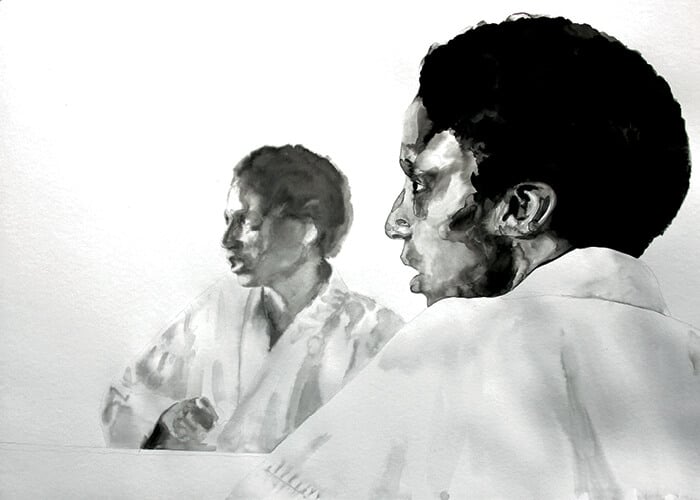 Exactly. In one of the first paintings I did of awomanfighter,theinksuggestedthatshe had a black eye. I realised with shock that it was the only image of a woman with a black eye that I had ever seen that did not infer domestic abuse. This idea of subversion or the unexpected was enough to pique my interest. The act of fighting is both violent and intimate at the same time. In the same way, motherhood is another unexpected place for violence and intimacy. Rose is the mother and Thozama is the mother’s substitute. Although this practice has a very long history in South Africa, I still find it as shocking as I initially did when I came to South Africa at the age of ten.

The limits of colour, gender and social background seem to be less relevant in a place like the dojo. It becomes a South African space where borders and structures are seemingly opened up. Is there a political impact in your work?

I see the dojo as a closed bubble that sits in a larger societal structure. It has its own set of rules and etiquette, which is imported from Okinawa. Even though it has its own strict hierarchy, the dojo is still a subversion of the outside South African post-apartheid society. I felt that if I used that as a lens and shifted it to the outside society, then one would be able to see that its hierarchies are man-made. In terms of political impact,the manufactured quality of a system first needs to be understood before it can shift or change. 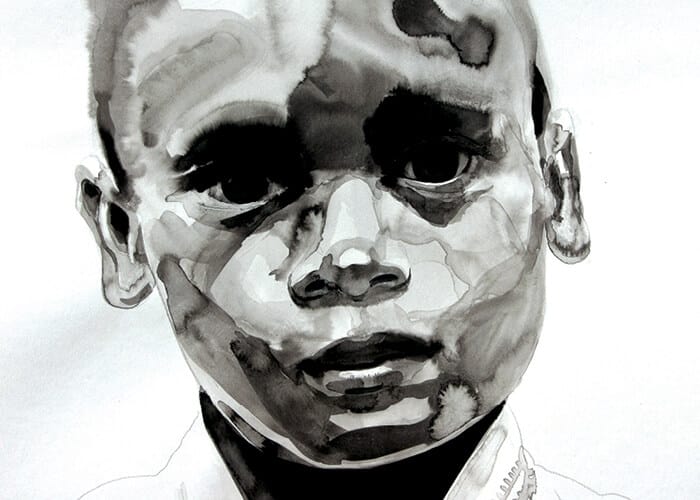 Why did you choose to use ink for this body of work?

Watching Thozama and Rose is quite emotional. One of the things you have tolearninthewholeprocessoftraining towards a black-belt is to control your emotions. A good fighter is someone who is able to control their anger, aggression or fear. However, karate is also full of unexpected moments where you can’t anticipate what is going to happen in a fight. In this way, it’s similar to working with ink as there’s both an element of control as well as a lack of it. Colouristically, the ink restrains the heat of the fight or of emotion.

There’s quite an oppositional binary here; a black woman, a white woman, one slightly younger, one slightly older, and yet they are also two fighters fighting each other.

I want the viewer to initially experience it like this. Yet as one walks through the video installation of Thozama and Rose one can see all the gradients and shifts between those two binaries. On the surface you see the differences between these two women, but the ink establishes a kind of commonality as well. 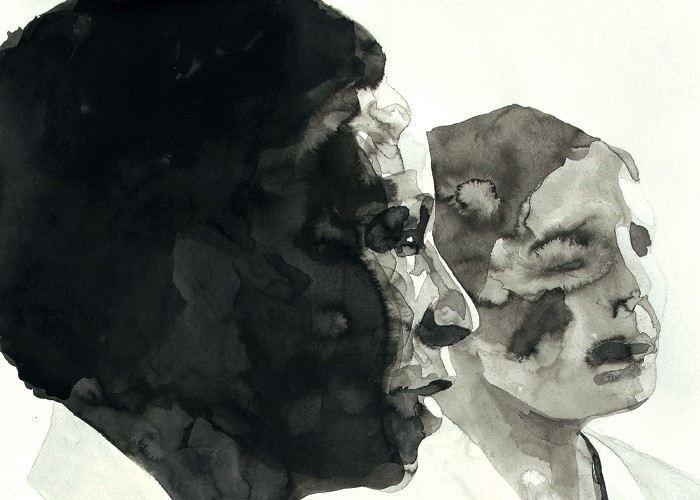 Christiane Lange is an art historian and collector, based in Germany.