‘Cliche vs Cliche’ By Francis Falceto

With the presence of both local and internationally invited experts, the Addis Foto Fest Conference is a platform to discuss the development of photography in Africa and beyond its borders. Participating panelist Francis Falceto is the author of Abyssinie Swing: A Pictoral History of Modern Ethiopian Music and winner of the BBC World Music Award (2008). His collection of photography from Ethiopia’s jazz scene dates back to the 50s, providing a fresh perspective on the often reductionary nature of representation. 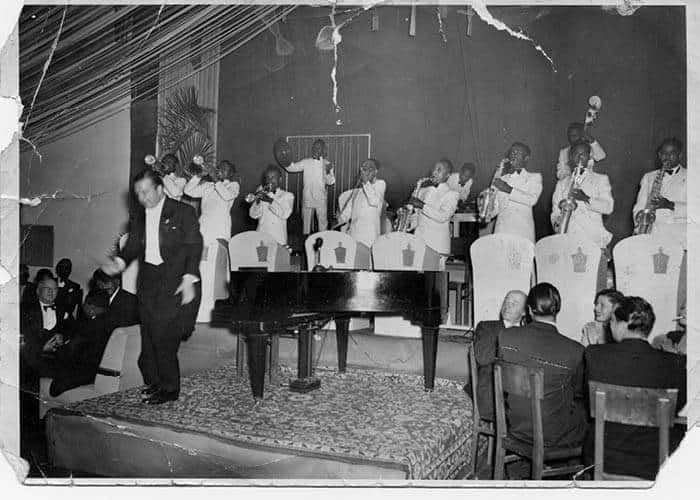 “It’s the viewer who makes the painting”
– Marcel Duchamp
Photos reflect reality.
Photos do not reflect reality.
We know (especially thanks to the horrid television) that images can sometimes speak better than any text. But images require viewers with brains that think and question; what does this image mean? Otherwise images may speak worse than text. Ethiopia can relate to this. Ethiopia knows too much about her extensive misrepresentations through alien views, from the past and present.

Almost all the articles I have published on Ethiopian music since 1985 began with a mandatory introductory paragraph exhorting the reader to abandon the sordid clichés that northern media had etched into so many minds – famine, desert, “they do not know the rain…” Ignorance, prejudice, a simplistic image, television “realities” denying reality, these are all easy clichés that brainwash with rigour.

In 1997 when I began to publish the Éthiopiques CD series I decided to no longer start my introductory texts with these paragraphs I previously thought were obligatory about media calamities. Rather than militant advocacy, it seemed more convincing to me to present an iconography that bears witness to the rich musical scene of “Swinging Addis.” Sober elegance of the Imperial Guard’s Orchestra, implacable distinction of the Haile-Selassie Theatre big band around Nerses Nalbandian, Rock ‘n’ Roll poses of the Police Orchestra’s horn section, or of the Army Band; all these unlikely silhouettes seemed to me strong enough to perplex humanitarian benefactors. Tuxedos, ties, bow ties, impeccably styled coifs, glamour, chic and charm to all floors. You really have to be a serious moron not to ask the right questions and find the correct answers: Obviously, artists as elegant as this cannot live in the middle of the desert. We’re going to have to revise our prejudices. 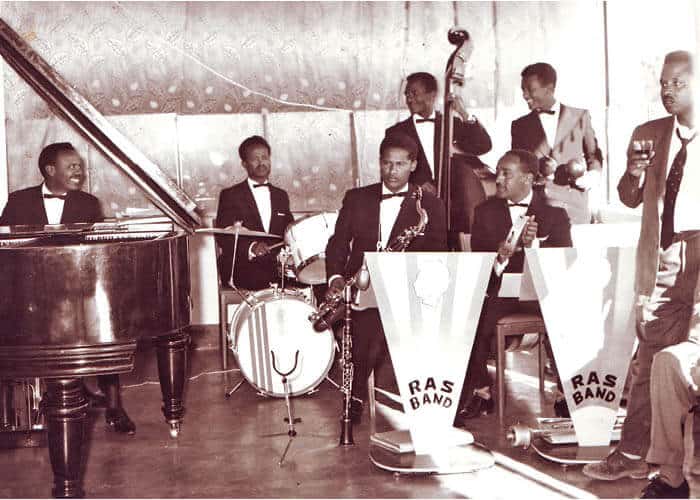 Sometimes pictures can awaken the memory.

In 1995, the first exhibition of ‘Swinging Addis’ at the Alliance Éthio-Française and then at the Ager Feqer Mahber alerted me of this (that pictures can revive memory). Some old musicians recognised themselves in the photos and were extremely moved. They could not hide their amazement; it was as if they were brutally seized by an uncontrollable dizziness, as if they suddenly relived these memories. They recognised themselves, it was really them from twenty or thirty years ago. But the terrible glaciation of Derg had taken place, lasting nearly eighteen years – annihilating memories, violently repudiating any nostalgia of an imperial era now reviled. “We were like that?!” They said, half exclamatory, half interrogative.

Mandatory censorship, suppression of good memories, the amputation of a glorious past, memories to restore. Beyond my methodical interest as a historian in these photos that show a particularly auspicious period of modern Ethiopian music, I found myself suddenly measuring the magnitude of their meaning. These photos represented more than a mere visual testimony. Like a computer fighting a virus, they contributed to the resetting of memories, becoming a means of liberating and rebuilding a past full of drama, violence, and death.

A few years later, when I met the first young diasporas (among them oddly there were many artists) who were beginning to return to their homeland to make their contribution and use what they had learned in exile to help in its development, I was able to gauge how much music could have served as “imaginary nostalgia:” they loved the music that brought back what was considered the taste of the day, the Éthiopiques CD collection dedicated to recordings from the end of the imperial era. It was the music of their parents’ generation, but its indestructible modernity also captivated the next generation. This music had served as a bridge between generations, and had unearthed the words buried for so long by their parents. There is a profound analogy between the evocative power of the photos showing ‘Swinging Addis’ and the soundtrack of that era. The sharing of music could henceforth allow them to say everything or almost everything, and to speak openly. History could now restart, glue together again bits and pieces, and give shape to the hope of a new life.

It is not pure coincidence that my interest in Ethiopian music drove me to frantically collect photographic evidence. There is more than an analogy between sound and image. Given the meager interest observed in Ethiopia up until now, for all that is heritage, preservation, restoration and promotion well understood, particularly in a domain – music – considered minor if not ostracised, it is not surprising that photographic vestiges, like sound recordings, are often found in a pitiful state. But the state in which we sometimes find photos – wrinkled, folded, marked, torn – is still better than nothing. This draws attention to a kind of resilience of photos themselves; a resistance to chemical shipwreck, a triumph over the horrors inflicted by the passage of time. Ditto for old records, as sensitive as photos to the injury of time. The restoration of these and others is an essential step for our memories to find a mirror worthy of their brilliant past.

Francis Falceto, producer of the twenty-one volume music series Éthiopiques, has won the BBC World Music Award in 2008 and the World Music Expo Award for Professional Excellence in 2011. He is also the author of Abyssinie Swing: A Pictoral History of Modern Ethiopian Music. He is an avid fan of Ethiopian jazz and a collector of archival photographs from the 50s, 60s and 70s in Ethiopia.

Text translated from French by Ainslee A. Robson.