Collecting and the Market for African Art 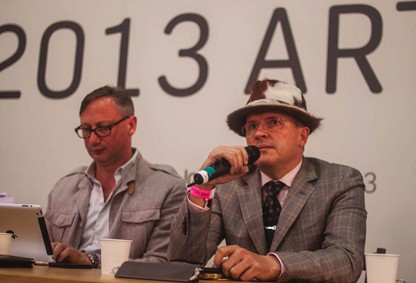 Warren Siebrits at the Art Talks, FNB Joburg Art Fair 2013. Photo by KB Mpofu. Courtesy of Goethe-Institut.
An ‘evolution of consciousness’
Warren Siebrits, a Johannesburg-based collector, dealer and longtime reader of this market, offered thought-provoking and provocative comments on what it means to be a successful collector of (African) art In considering the role of the art viewer/commentator/collector in relation to artworks and their market, he suggested that 50% of creativity is informed by the viewer/commentator who assists in creating an ‘evolution of consciousness’ around an artwork and how
it is perceived – that in effect critical discourse creates a legacy of art. He proposed that collectors be understood as conceptual rather than just practical market entities who have the ability to bring awareness, insight and a vision of greatness to a work of art. Siebrits further argued that there needs to be an evolution of a personal consciousness by the collector in terms of his/her own process of collecting: from Siebrits’s perspective, price should not become a factor in one’s decision to collect. Instead, he suggested, a collector should consciously slow down the process of selecting work in which s/he wishes to invest – to be discerning rather than collecting too easily; to make decisions in the course of time so as to identify works of art that are ‘going to remain great in the future’. He urged collectors to consider acquiring work that, even if haphazard in their thematics, style, and consistency (or lack of it) with the rest of the collection, nevertheless speak specifically to them. In other words, that collecting involves conscious and thoughtful discernment rather than just accumulation, and collectors would thus be well advised to develop a strategy for collecting that goes against the status quo.
Federico Freschi is an art historian and the Executive Dean of the Faculty of Art, Design and Architecture at the University of Johannesburg
Tracy Murinik is Research and Projects Director, and a Research Associate of the Research Centre, Visual Identities in Art and Design (VIAD) in the Faculty of Art, Design and Architecture at the University of Johannesbur