Robert Devereux, When the Heavens Meet the Earth

Robert Devereux spoke to COLLECTOR. on African art now, his private collection ‘Sina Jina’, and the personal side to collecting art. 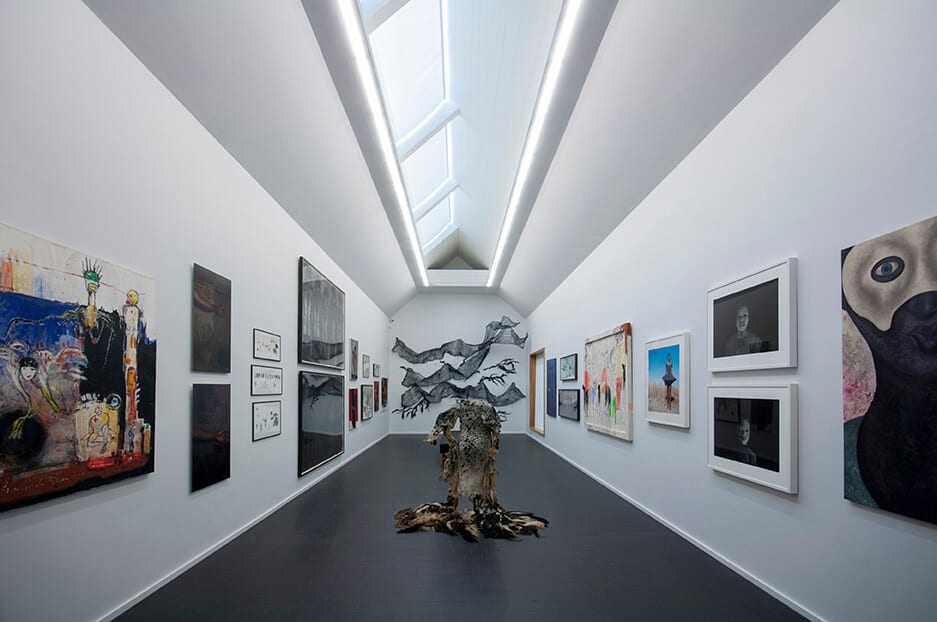 ART AFRICA: In 2010, you sold your collection of four hundred and sixteen post-war British artworks through Sotheby’s, enabling you to establish The African Arts Trust (TAAT). What made you decide to do this?

ROBERT DEVEREUX: I suppose I did this to support young and emerging artists at an early stage in their career, as well as to support – to a certain extent – galleries who support artists.

I came to this conclusion after having spent a lot of time in Africa, meeting the artists and collecting their work, and I realised that the most effective way to support the arts there was to create a fund that would support African-based artists.

The only way I could really afford to set aside enough capital to do this was to sell my English art collection – at the time I was trying to get this art collection down to a manageable size, so this just felt like a very serendipitous way of achieving that. I also liked the congruency in recycling the money from the English collection into an African art collection.

Having been on the board of Frieze, the Tate Africa Acquisitions Committee, and an advisor to the 1:54 Contemporary African Art Fair, you have had your fair amount of exposure to artists from the continent. Does your collection of contemporary African art have a specific focus, and what are some of your favourite works in the collection?

It doesn’t really have any focus, well at least not the way in which I collect. I’ve never been really comfortable with the notion of collecting, or being a collector. However, that being said, the way in which I collect is very personal. It very much depends on where I travel and who I meet, and I would say it has a certain amount of development to it.  So I guess it basically focuses on artists who are connected to the African continent. But beyond that, the collection covers all the mediums, and it’s really governed by what I love and what I like. And also by discovering artists who I think will benefit from the support of a collector buying their work. I mean there’s plenty of work I own that doesn’t come into that category, but that’s probably what I continuously turn to. 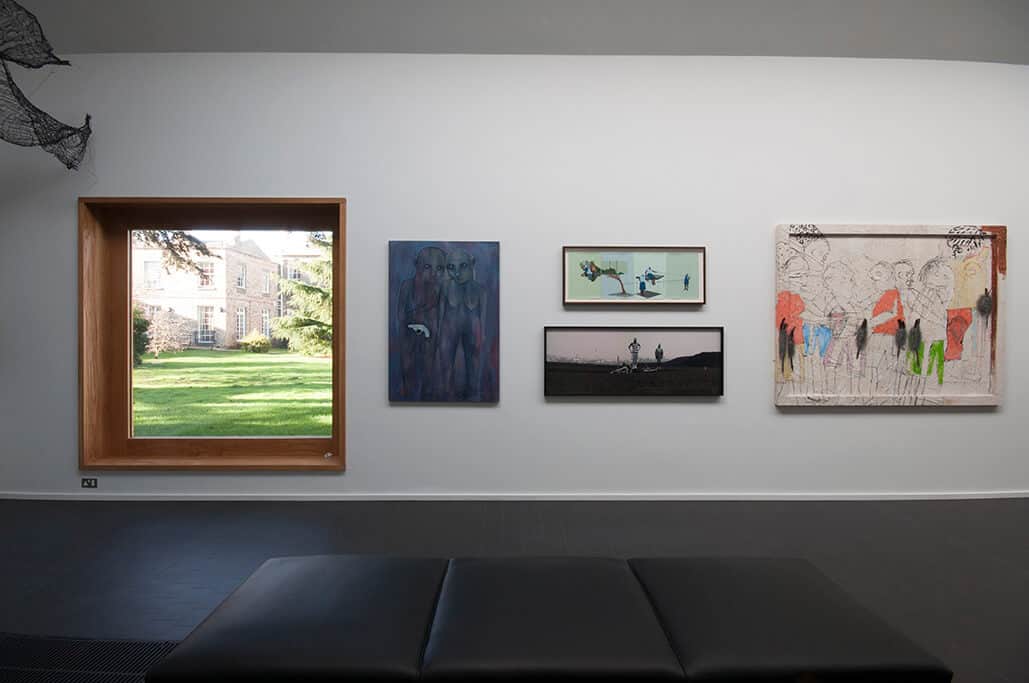 As a collector, you are focused on supporting artists and giving them the confidence to develop their practice, particularly those who are based in Africa. This being said, there has been a growing amount of interest in contemporary art from Africa – what do you think is driving this global fascination?

I think it’s a number of factors. I think it’s been an under-recognised and an underexplored area of the art world. I also think there’s an underlying curiosity with the new and the unknown and I think there are obviously specific things that have aided and abetted that. There have been previous ‘bubbles of interest’ – such as art from China – Africa is sort of the next continent on the list – people looking for interesting, unexplored, new areas of interest.

There is an enormous number of extremely talented artists connected to, working in, or from the African continent. I think some of the specific things that have helped are the publishing on and curation of art from Africa, such as your magazine. I think the creation of the Tate’s African acquisition committee has helped, and I think for so long it has been a process. I think it’s more an incremental increase of interest. It’s not an explosive surge, it’s been a slow and stable process.

Why did you name your collection ‘Sina Jina’, where <Sina Jina> translates into English as ‘no name’?

We shouldn’t necessarily read too much into that. I have a house in Lavu which is called ‘Sina Jina’, and the reason being because, rather curiously, unlike all the other old houses, it never had a name. So, I called it Sina Jina, partly because I liked the humour, anonymity, and neutrality of it.

I like the neutrality of calling the collection ‘Sina Jina’ too. Of having a collection with ‘no name’. I find the whole subject of collecting, and being a collector rather curious and intriguing. But I never set out to create a collection, and this is not a collection in the sense of something that has been put together with great planning.

My collection is rather random and personal.

You have said that your collection highlights emerging artists who challenge Western preconceptions of, and hegemony over, cultural expression and contemporary art. In looking to maintain the support of artists like this, what criteria do you follow when choosing a new work for your collection?

No, no criteria. Again it’s a very personal response to the work. It normally starts with what I would describe as an emotional engagement with the work. If the work doesn’t speak to me or communicate some kind of emotional judge, then I don’t go any further with the work.

Then there is a second stage, I suppose. This is where I get to know the artists, and why and how they go about making art. Understanding what it is that the artist is trying to achieve, and then understanding the context of the environment in which it is made. I’m very interested in the particularity of where work comes from.

Would you say that you have a vision of how this can be directed back into the continent? Because you see a proliferation of contemporary African art, where some of the best artists are pulled into global market places – seeing their work mainly in New York, London – you yourself are based in the UK.

What does it look like to return these collections and draw that scape back into the continent – particularly thinking about particularities in the cultural context?

I don’t think there’s an ideal. I’ve often said that I would love to buy an organisation and museum, or institution – whatever the right word is – in Africa that I could give my collection to one day. There is a part of me that would like to see the work return to Africa, but then again, I also think it is extremely important for the artists that their work is seen everywhere and anywhere, and in the context of cultural roots, where an artist comes from – at the end of the day, they are also a part of an international community. I don’t think they are categorised by being called ‘African Art’. But I try very hard to avoid that whole subject. The whole issue of the labelling of African artists is a tedious one, it’s not even worth discussing – clearly there is no such a thing as African art, there is no such thing as European art, or even English art. All labels of that kind are a shorthand convenience that serve a purpose. But they don’t have any real substance. 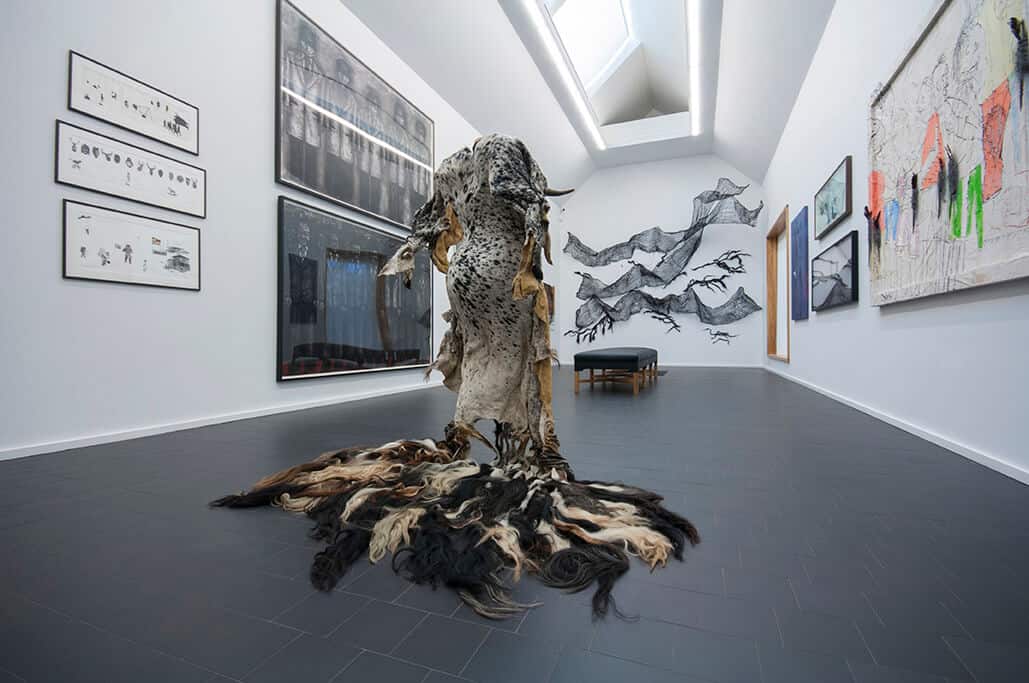 In that regard, what advice would you have for someone who is looking to start their own collection?

There is no ‘proper’ way to collect. It’s a very personal journey, I think. But devote some time to looking at works created in studios, and get to know the artist. Immerse yourself in that world. I think you need to do that to have a focus of some sort – it’s a big world out there. What you choose to focus on is an entirely personal choice, and sometimes quite fortuitous.

The work in my collection is quite largely connected to the political realm – that’s what my personal ‘preference’ is.

When the Heavens Meet the Earth was on exhibition at the Heong Gallery, Cambridge from the 25th February – 21st May, 2017.