in News Articles 2013
Share on facebook
Share on twitter
Share on email
Share on whatsapp
Andrew Lamprecht, the recently appointed Editor of ARTsouthAFRICA’s new sister publication, ComicArtAfrica, sent out a series of questions to a number of comic art practitioners for comment. This is the response of Alistair Brauns (Cape Town-based architect and illustrator). Selected extracts from other respondents are included in pull-quotes throughout the supplement and will be published online and in ARTsouthAFRICA’s digital editions over the next few months. 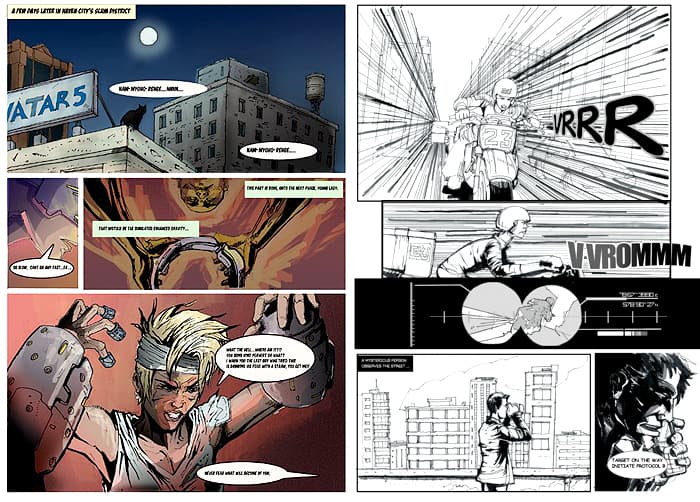 ABOVE: Artwork by Alistair Brauns from Crimson. Courtesy of the artist.

The local scene is highly fragmented, yet growing quite rapidly in the last 5-6 years. There are attempts to create a stronger ‘community ‘ by people like Andy Mason and Moray Rhoda. As such. South African comics is a niche within a niche market, the most popular perception of the medium still held as ‘kiddy fare’ but slowly this is changing by appreciation of the educational and commercial benefits often at the expense of creator independence.

Comics have the ability to communicate through primarily through the power of images which is important in our country with 11 official languages and varied education levels in the population.

The medium has been most developed and refined in the US. This (comic books) is one of the American invented mediums according to Harlan Ellison, (an American writer _Star Trek , Outer Limits), and there is some truth to that. Inspiration can come from anywhere but the mechanics of panels and text are highly developed in the US publication. Plotlines and archetypal characters,  often seen as conventional by the masses, are challenged by European comics, taking a more philosophical approach, which one may argue is more engaging to an adult contemporary audience.

Worldwide the trend in term of an art style seems influenced by the digital tools at the artists disposal, more animation like, consisting of a crisp outlines and computer colours. Local artists seem of a  European/American hybrid.

This may have to do with the influences and visual exposure of the artists who, at this point in time, stem from a similar demographic sector of the nation. The most popular artists of the medium seem to lay the foundation of what to follow.

We need publishers! we need patrons!

Local comic artist would like more of the same opportunities and attention as other ‘high brow’ artists get for exposure.

Currently developing the 3rd book of Crimson, searching for a credible writer as we speak! Also looking at developing a 2nd book title aimed at younger audience which is educational in content at the same time. Also looking at collaborating with local writers.

Thanks for the opportunity to be included and for your interest in South African comics!