Andrew Lamprecht, the recently appointed Editor of ARTsouthAFRICA’s new sister publication, ComicArtAfrica, sent out a series of questions to a number of comic art practitioners for comment. The full response of Anton Pretorius (currently a post-graduate student at Stellenbosch University specializing in Illustration) follows below. Selected extracts from other respondents are included in pull-quotes throughout the supplement and will be published online and in ARTsouthAFRICA’s digital editions over the next few months. 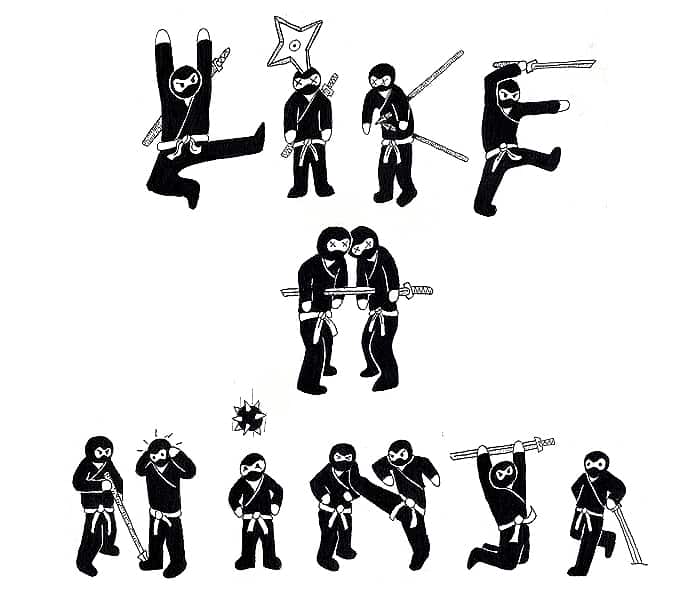 Like a Ninja by Anton Pretorius. Image supplied by the artist.

I think South Africa has come a very long way and the industry has grown tremendously. However we still aren’t quite at the same level as European countries or even the states, this leaves us with the opportunity to create something unique to us.

Comics engage people, they draw them in and keep them there. Comics blend word and image like no other medium can and it’s in that mix where it’s power is held. Therefore comics have a great potential for change, look at Zapiro, through his work people can be shown mistakes and problems  that they would be unaware of otherwise.

I think that we are definitely very influenced by the west, which is not surprising as we are the most western country on the continent.  Much of our own industry is based off of theirs, which means it is very difficult to completely break free from that influence.

I do think that South Africa and it’s artists have a responsibility to our continent and country to try involve as many creatives from African countries as possible, and through this collaboration maybe bring about some upliftment.

I think comics vary so much from person to person that pinning a specific style to them is difficult, I think rather there is definitely a certain attitude or feel that South African artists convey that is completely unique to us.

South Africa is so full of people, from different backgrounds and walks of life. So many collective experiences and nuances, people who have been through much difficulty and heartache, joy and love.  All of these aspects colour that same attitude that I spoke of earlier.

I would definitely have to say there is a hopeful cynicism about South African comic artists, if that makes any sense.

As I said earlier South Africa still has much growth when it comes to comics, our culture is still quite behind when it comes to buying comics and comic related merchandise. For this reason it is still very difficult to make a living off of comics.

I’m proud of the leaps and bounds South Africa and it’s artists are making in the field of comics and I can only hope that it will continue to do so in the future.

Currently I am busy with my post graduate studies in Illustration at the University of Stellenbosch which takes up the majority of my time.

I’ve sent a short 4 panel web comic to a few publications to see what interest I can generate.

I will be also be taking part in the Fumetto – International Comix-Festival competition in January.