in News Articles 2013
Share on facebook
Share on twitter
Share on email
Share on whatsapp
Andrew Lamprecht, the recently appointed Editor of ARTsouthAFRICA’s new sister publication, ComicArtAfrica, sent out a series of questions to a number of comic art practitioners for comment. The full response of Daniel Hugo (the artist responsible for the cover image of the inaugural edition of ComicArtAfrica) follows below. Selected extracts from other respondents are included in pull-quotes throughout the supplement and will be published online and in ARTsouthAFRICA’s digital editions over the next few months. 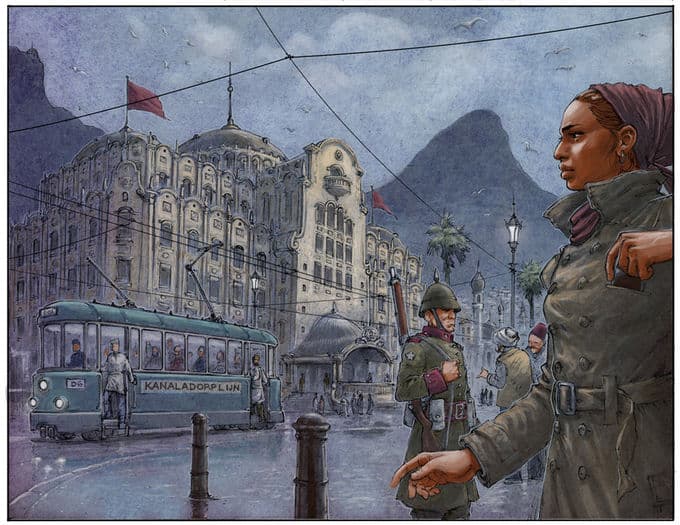 ABOVE: Daniel Hugo, Imaan September, ‘Velocity Graphic Anthology,’ 2012. Courtesy of the artist.
What is the current position of comics and other related media in South Africa and the African continent? Have we arrived or are we still on the journey?

The sad reality is that comics in SA inhabit a fringe position. There seems to be a dismissive attitude from the reading public (apart from a small but loyal following) & the general art establishment. Hence comics are unappreciated & underrated. We have certainly not arrived yet!

One is able to tell very personal stories visually without constraints like budgets or clients; you are only limited by your imagination & the ability to tell a story with pictures & words. In a local context, I suppose it’s a window into others’ stories, lives & ideas across the language divide. It’s the one thing I believe promotes literacy from a young age.

I think the whole world draws their inspiration from the US & Europe, as well as Japan, seeing as they produce the most comics in numbers & genres. In terms of stories, I think, although we are infuenced by these Big Three, there is a tendency to draw inspiration from our own surroundings, angstiness & legends. It would be wonderful if there were more cross-pollination with other creatives from the Continent, which is something that the Velocity Graphic Anthology has promoted.

The positive aspect of there being no formal publishing house in SA, is that everyone is free to experiment & pursue a personal style & genre according to individual tastes & influences. I find this diversity of styles & stories quite cool & it is nogal astonishing, considering the micro scene we have here.

It has been great to see so many new comics be created in the last few years. It is unfortunately only being seen by a relatively small number of people in the big centres like Cape Town, Durban & Joburg. Comic distribution in SA is a BIG problem.

Finally describe what you are currently doing relating to comics, cartooning or sequential narrative. Please list your recent publications or current projects

I recently self-published a stand-alone comic “The Souvenir” & I’m currently considering a few story ideas to expand on that particular world. Going to take a break from comics for the next month or two to focus on other illustration projects.