in News Articles 2013
Share on facebook
Share on twitter
Share on email
Share on whatsapp
Brundyn+ is please to present, commute with intuitive instinct, an exhibition of video works curated by Portia Malatjie. The exhibition showcases works by local and international artists Michelle Monareng; Mocke J Van Veuren and Theresa Collins; Bofa da Cara (Nástio Mosquito and Pere Ortín); Nick Cave, Vaughn Sadie and Sello Pesa; and Gilad Ratman.
commute with intuitive instinct follows Henri Lefebvre’s notions of The Production of Space. Spaces are considered areas that are never neutral, and arguably not natural, but are rather constructed, ideologically and physically, to serve a particular purpose. These spaces, whether within a city, nation, or continent, are laden with issues of power and surveillance. People’s movements are controlled, often restricted and directed to occupy certain paths of the terrain. 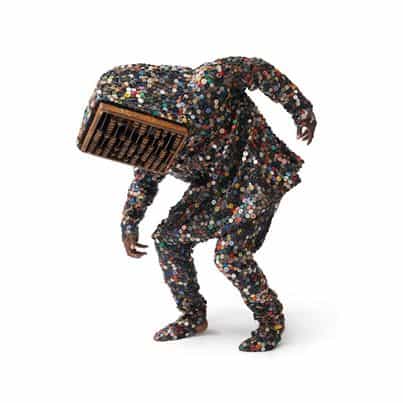 Nick Cave’s Gestalt is a video quite unlike some of his earlier works. In this serene and quiet work, we see a number of performers (adorned in Cave’s famous Soundsuits). The performers are ‘stuck’ in an incredibly clinical white space, as their movements cause tension between the quietness of the space and the often jarring movements of the performers. Their interaction with the space is an enigmatic one and suggestive of constriction and perhaps a hint of lunacy. The performers ability to move in and out of the space suggest that, although they have the means to escape, there is an inherent self control, alluding to the idea of Foucault’s panopticon.

Mocke J Van Veuren’s and Theresa Collins’ Minutes: time/bodies/rhythm/Johannesburg is an attempt by the artists to map and record the rhythms and pulses of certain spaces in the city of Johannesburg.
Sello Pesa and Vaughn Sadie follow suit, producing Inhabitant, which deals with the occupation of people in the Johannesburg inner city.
The apartheid system successfully carried out the control and movement of people of certain demographics. Cases in point are the forced removals of black, Indian, coloured and Chinese people from areas such as Sophiatown and District Six. Parallel to these mega narratives are smaller anecdotes, such as the forced removals in places such as Heidelberg. Michelle Monareng, in Removal to Radium, explores a story that has hardly been told, a story personal to her wherein she narrates the forced migration of her people to Radium in North West province.
This foreign occupation of space is one further investigated and documented by Thenjiwe Nkosi in Le Tchad: True Heart. The artist presents us with a visual, video diary of her travels to Chad in 2008, a time when the country was undergoing unfortunate political turmoil. In the video, we see the artist as she constantly reinvests, reimagines and reconstructs her identity to fit the specific times and spaces she encounters on her journey.
The transnational travel by Nkosi from her then base in New York to Chad is mirrored in My African Mind. Bofa da Cara, a collaboration between Nástio Mosquito and Pere Ortín, explore forced transnational encounters such as the transatlantic slave trade from the 1500s through to the 1800s, among other things. My African Mind and My European Mind: Rebranding Europe speak to the exchanges between the west and Africa. They go back to an issue of representation, arguing that the manner in which Africa has been and continues to be portrayed by the west is problematic and desperately requires reinvention and reconsideration.
Gilad Ratman’s The Days of the Family of the Bell humorously plays with our perceptions of space and gravity. By presenting us with an illusory scene, we begin to question what is often presented to us as truth in the media and the internetA catalogue with tests by Portia Malatjie and Nomusa Makhubu will accompany the exhibition.