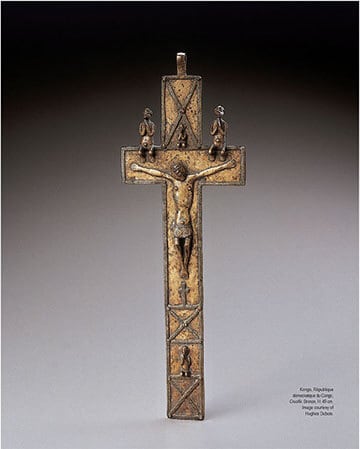 Kongo, République démocratique du Congo, Crucifix. Bronze, H: 49 cm. Image courtesy of Hughes Dubois.
Few objects created in Africa as thoroughly reflect the range of misconceived ideas outsiders have projected on the expressive and spiritual cultures of the continent. Since the beginning of the nineteenth century, the Bakongo groups of central Africa have constructed and enhanced some of their wooden figures with nails. Once seized or traded from today’s northern Angola, western DRC, Cabinda, and Congo, dozens of these figures continue to be displayed in museums of art or anthropology around the world – an unrelenting visual impact born of the intricate of their construction.

Among the best known of these objects today is the large figure that colonial administrator Alexandre Delcommune seized in 1878 from Né-Cuco, one of the rulers governing over the surroundings of Boma, a station at the mouth of the Congo River that served as a centre for Belgian activities. Grounded with two stocky feet and topped with an intense face, the anthropomorphic wooden structure stands over one metre high, disappearing under a dense material covering. Metal blades and nails, themselves surrounded by textiles of all types and designs, cover its chest and arms, while a net ensnare its legs.

The armour-like shell of metal and textile dynamically link the figure to its surrounding – an ambivalent, and visually striking, bi-directionality. What constricts and wounds the figure also forebodingly extends its body into the space around it. A container of expertly accumulated and arranged material aimed at impacting the world around it, the figure from Boma belongs to a category of objects called minkisi (sing. Nkisi), in the Kikongo language. Minkisi are complex combinations of concrete and abstract ingredients that trained practitioners composed to capture and direct invisible forces towards particular goals. They were neither objects of worship, nor figurations of the spirits or gods, but empowered tools of action or protection.

A subcategory of minkisi, nail figures came to European attention at a time marked by the rise of imperial colonialism: a context in which they immediately acquired, among their new viewership of outsiders, misleading, and enduring interpretative frames. Mislabeled as idols by missionaries because of their occasional human or animal-like forms, they were also glossed as fetishes by colonial officers and traders who literally and metaphorically apprehended them as cathartic proof that their onslaught on the region was, in fact, a crusade for civilization and against obscurantism. In their quest for evangelization, some missionaries nonetheless worked assiduously at collecting and recording information about the objects they endeavoured to suppress. Yet, in a worldview ruled by Hegelian ideas of Africa as a place without history, one question did not arise in these and related inquiries − that of the origins of nkisi in general, and of the use of nails in some of them in particular.

What events, what circumstances, one wonders, might have spurred visual and ritual innovations of the kind that would give rise to the production of such visually striking and socially prominent objects as the nail figures? The thousands of pages Europeans and local inhabitants alike wrote about the region since the end of the fourteen hundreds do not mention anything alike these remarkable objects, mounting strong evidence that such figures did not exist or at least did not play a significant, highly visible role before the eighteen hundreds. It is British navy officer James Tuckey who gave us the earliest description of nail figures (1816) in his report on his travels at the mouth of the Congo River. “Each village” he wrote “has a grand kissey […] It is the figure of a man, the body stuck with bits of iron, feathers, old rags, &c. and resembles nothing so much as one of our scarecrows.”

The visual and spiritual environment that surrounded the creation of the nail figures were ones in which Christianity had figured prominently since around 1500. The kingdom of Kongo that ruled and culturally influenced much of west central Africa in the early modern period (16th – 18th century), professed Christianity and developed a distinctive Christian visual culture in which crucifixes and figures of saints played a prominent role. Some scholars have suggested a reading of the nails in minkisi as derived from or connected to Catholic crucifixions and hagiographies, but little that we know so far buttresses this idea. What Kongo Christian crucifixes and the nail figures of the Bakongo have in common, however, is a similar ability their makers demonstrated to use (on their own terms) visibly foreign motifs and materials. A striking feature of the Boma nkisi for instance, is its elaborate combination of local and foreign textiles and metal objects, making it both a locally grounded piece and a showcase of its makers’ and users’ broad, cosmopolitan horizons. The rulers of Boma and its surroundings had, after all, been dealing with foreign traders for decades if not centuries; managing their activities and coveting the imports they wove into every aspect of their political and ceremonial lives. The nail figures reflected this context, even if their visibly foreign dimension remained invisible to European observers whose preconceived ideas about a region they stubbornly approached as the “heart of darkness,” blinded to even such spectacular visual statements.

Much is left to uncover about the origins of nail figures as a visual genre and spiritual tool, and about the nature of their relationship to the artistic, religious, and material environment that preceded the period in which they reigned over west central African societies.

Bringing together nail figures and Kongo Christian art does not sketch a story of origins or derivation, but, taken at the level of process, it reveals how both categories derived from and bore witness to the ability and talent of Kongolese men and women to embrace novelty, manage change, and recast foreign materials into objects and forms of their own.

Cécile Fromont is on the faculty of the Art History department at the University of Chicago. Her writing and teaching focuses on the visual, material, and religious culture of Africa and Latin America, with a special emphasis on the early modern period (ca 1500-1800) and on the Portuguese-speaking Atlantic World. Her first book, The Art of Conversion: Christian Visual Culture in the Kingdom of Kongo was published in 2014 by the University of North Carolina Press for the Omohundro Institute for Early American History.