There is an iconic aerial image of Cape Town – taken from the air above the ocean – with the city’s Natural Wonder, Table Mountain, in the background, the harbour and Waterfront to the left and Lion’s Head to the right. In the middle of the image is the Green Point stadium, built for the 2010 Soccer World Cup. The stretch of beach directly below the stadium is where artist Janko de Beer collects the bull kelp for his contemporary futurist sculptures, Janko de Beer constructs his sculptures by first creating a metal armature, which is then meticulously shrouded in dry bull kelp stems, bulbs and fins. Details and depth are added using non-drying modelling clay. The sculpture is then moulded and cast into limited editions of bronze and resin. His latest solo exhibition, ‘Constructing Imagination,’ will be on show from the 10th – 29th September 2016 at the ODA Gallery in Franschhoek, Cape Town. 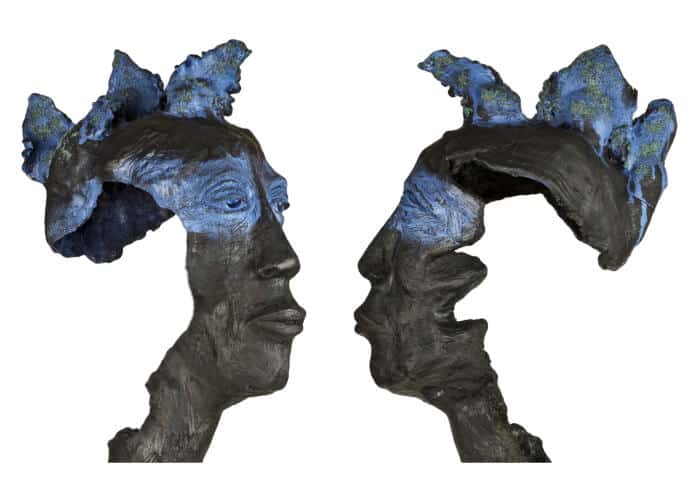 You have a solo show at ODA, Franschhoek, titled ‘Constructing Imagination’ – which opens on the 10th September. Please tell us about the show, where does the title come from?

I recently accepted gallery representation from Patritzia Litty of ODA Gallery. I like the way the space dissolves barriers between design, fine art, and sculpture, erasing the necessity for distinction and simply allowing the joy of experiencing beauty and individuality. The title for my solo exhibition ‘Constructing Imagination’ is an extension of my philosophy that being an artist is nothing more than an attempt to show others what your imagination can conceive and ultimately construct.

What is your background in fine art and specifically sculpture?

I believe that being an artist is, to a large extent, embedded in one’s everyday activities. I grew up in a big family that has always encouraged creativity and appreciates art. For high school, I went to Pro Arte Alphen Park, a well established art school situated in Pretoria, where I was exposed to a variety of art forms. Over the years since, I’ve participated in many group exhibitions and had my first solo show in 2010 at Long Street Gallery (Cape Town), but I’ve only been pursuing art full-time during the past few years. 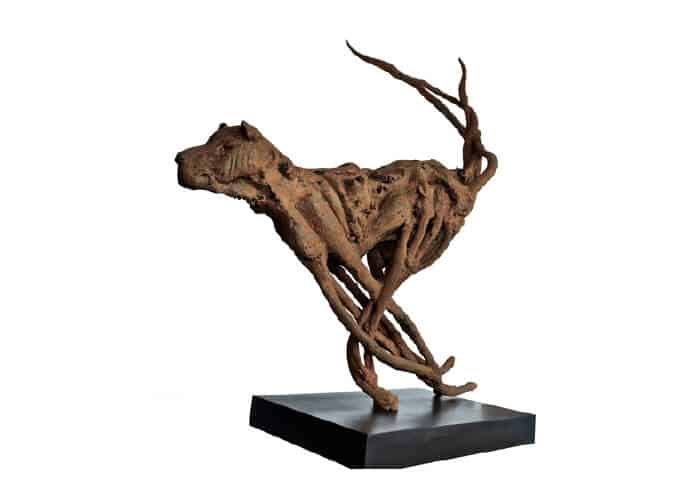 You are a full-time advocate, artist, husband and father. How do these various elements feed into your practice as an artist?

Law has been my career for more than ten years now, but art has been a passion for much longer than that. I have now reached a point in my art career where I balance the two 50/50. I’m very busy! I need to manage my time extremely carefully. After a working day in court I come home, spend some time with my family and then start my working day as a sculptor. I enjoy using both sides of my brain. Law is analytical and requires logic without emotion whereas art is an escape from the demands of daily life. When sculpting, I’m able to clear my thoughts and escape into a space of creative possibility.

Many of your sculptures are made from bull kelp, which you transform into everlasting art pieces cast in resin or bronze. Is there a “man & the sea” connection?

I love the ocean and spend a lot of time outdoors. I often see figures and faces in natural objects. I love using found objects – such as coral, wood, scrap metal, and bones. I combine these with conventional sculpting methods to produce the final works. The natural shapes that occur inspire me and I attempt to be guided by the flow and characteristics of the material I use, rather than strictly working from or towards pre-planned sketches.

Many people view kelp as ‘sea garbage’ – but one man’s garbage is another’s treasure! I find kelp attractive in shape, texture and form, and sometimes after a great storm the beaches look like an alien battlefield strewn with different body parts or muscles ready for me to collect and use. The lines of the stems are furthermore conducive to movement – which is characteristic of futurism in sculpting.

I’ve used bull kelp as the base medium for three sculptural series: one of horses, titled Equus, another titled Umbabat – which depicts the strength and movement of wild cats – and my most recent series, The Elders, which is a collection of faces and masks inspired by the face painting techniques of the Dinka people of South Sudan. I am currently working on a figure based series emphasising the integral relationship between humans and nature. 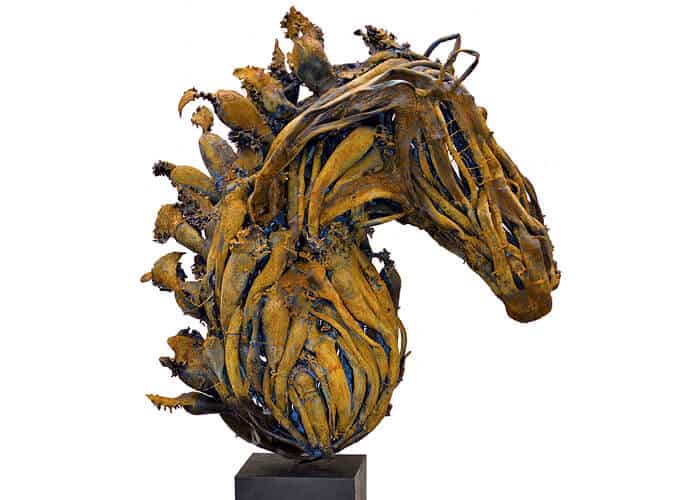 Many art collectors feel that there is a distinct ‘je ne sais quoi’ that attracts them to contemporary art from Africa. What is your take on this trend?

It’s exciting being an artist in South Africa at the moment. South African art is definitely attracting international collectors, many of them with deep pockets. Big names like Irma Stern and William Kentridge are fetching record prices. There has also been a lot of buzz around the Zeitz Museum of Contemporary African Art, opening at the Waterfront later this year. But up-and-coming artists are also doing well. I have a good client base here at home even though a large amount of my work ends up in the hands of international collectors.

I think there are a few factors that contribute to this. Globalisation is definitely one of them, there are expats from SA everywhere. I also think there’s heightened interest in fine art and sculpture from all emerging markets, not just SA.

What I find really exciting, apart from all the foreign investment, is that young South Africans are also spending money on art. Because they can’t generally afford the more established names, they are supporting young, exciting artists. Just look at the turnout one gets at events like First Thursdays and other pop-up exhibitions.

Many 21st century artists feel the heat when it comes to balancing commercial demand with their innate need to simply create. How do you deal with this?

I try not to be governed by preconceived notions of what is popular or critically acclaimed. In the end I believe this could result in a monotonous duplication of the same thing over and over. I have learned that it is better to be guided by the sculpture as it evolves, rather than to force it one way or the other. The end result, I have found, is much more fluid and stimulating. I believe that if I create something that I find beautiful, without over-thinking it too much, other people will also appreciate it.

Any thoughts on what makes “good art”?

Every artist walks the tightrope between critical acclaim and commercial success. Some scoff at critics and do commission after commission and are wealthy as a result. Others go to great lengths to produce fine art, which is unique and interesting but rarely commercially popular. I don’t think either of those paths lead to ‘good’ art, which is rather a balance between the two. Ultimately I love Picasso’s quote: “The purpose of art is washing the dust of daily life off our souls”. If my art accomplishes that for me, then it is bound to do so for others as well.

Janko de Beer’s exhibition ‘Constructing Imagination’ will be on show at the ODA Gallery in Franschoek, Cape Town from the 10th – 29th September 2016.