In February 2016, we welcomed artist Malala Andrialavidrazana to Cape Town for the second iteration of THAT ART FAIR, an initiative of ART AFRICA magazine. As one of our Featured Artists, she exhibited her dreamy cartographical compositions, inspiring viewers to question the mercurial nature of official narratives and categorical documentation, like maps, anthropological and scientific texts, and even currency. Critic and arts journalist, Ashraf Jamal, explores the nuances of Andrialavidrazana‘s vivid work. 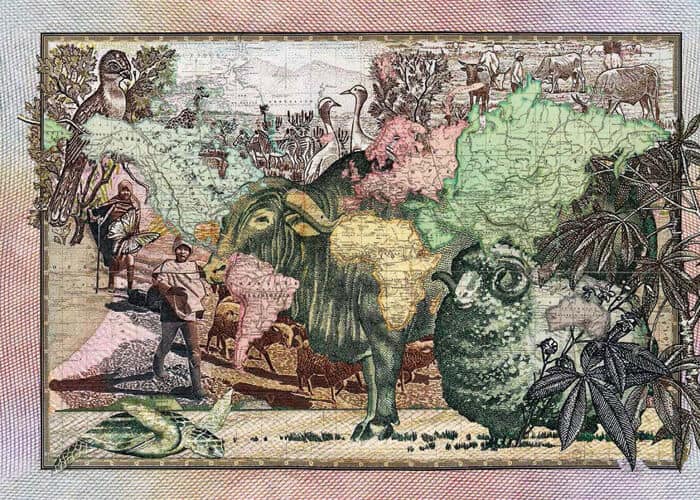 Wilt thou know what wonders strange be in the land that late was found?

Wilt thou learn thy life to lead by divers ways that godly be?
Wilt thou of virtue and of vice understand the very ground?
Wilt thou see this wretched world, how full it is of vanity?

Penned in 1556, Cornelius Grapheus’ invitation stands at the cusp of Europe’s great modern era of exploration. Such was the passion for discovery, the zest for other-worldliness, that (in 1570) it would spawn the creation of Theatrum Orbis Terrarum or Theatre of the Countries of the World, the most popular and widely read publication of the sixteenth century. “Here was the world itself, with its many component parts,” writes Paul Binding, “and it was shown to be a place of extraordinary varieties and a singular whole.”

It is this fascination with inter-connectedness and difference which remains with us today. Ours is a globalised world; a world that still searches for some unifying Esperanto; a ‘theatre,’ still fragmented, despite all the talk of ‘a singular whole.’

The Malagasy-born and Paris-based artist Malala Andrialavidrazana has made this paradox the core of her own cartographic explorations. “Cartography is both art and science as well as a powerful tool to control civilisations,” she sagely remarks. “When looking closely at maps and atlases, they are fascinating because of significant information they can offer within a specific period of time. They are not faithful representations of realities, but they sometimes convey strong ideas which are the keys to understanding historical narratives − this is a determining element in my selections.”

Like Grapheus and the creators of Theatrum Orbis Terrarum, Andrialavidrazana is all too aware of the fact that maps are dreaming tools, as incisive as they are deceptive and as strategic as they are corruptible and fantastical. Maps (even today) remain defining shape-shifters; the projections of ruthless economic, cultural and political pragmatics as well as the sheer lust for discovery. They are the ever-changing descriptors for our understanding of history and our place in the world. 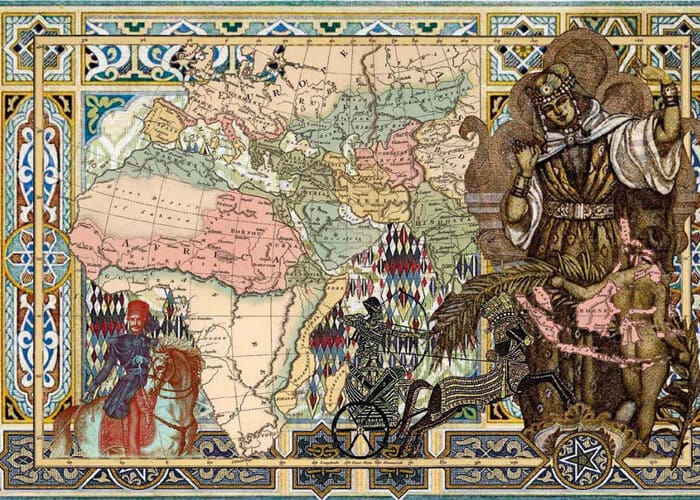 What makes Andrialavidrazana’s appropriation of this fictitious yet all-too-real cartographic form is her ability therein to rethink her mercurial place within it. “I don’t limit my works to specific areas,” she says. Her most recent works focus upon ‘a globalised world,’ however, “there are compositions displaying continents independently.”

The artist’s interest in the ‘counterfeit’ nature of mapping is rich. Not only does she embrace cartography’s mix of fancy and science, she also, in her process of photographing and interfacing these surfaces with those of banknotes, confronts ‘the rules against counterfeit’ built into the scanning of money. Hence the importance of the camera lens, her primary mode of transcription and realignment, for what Andrialavidrazana is doing is adding to and rethinking the points and vectors of location and power in our global imaginary.

If trade routes play an important part in our sense of history, as do migration and the randomness of location, it is because of the significance of navigators and explorers without whom the world could not have taken the physical and ideological shape it has. “They were sources of true and false information in the representation of different territories and they also brought up many preconceptions and stereotypes about different cultures which remain in our collective imagination,” Andrialavidrazana pointedly remarks. “The more they travelled, the more the world was depicted from their point of view.”

Perceptions are never innocent, which is why Andrialavidrazana gives us many perspectives. Thoroughly contemporary, hers is also an age-old diasporic vision. For no matter how avidly we cling to our small certainties of belonging, we are always on the move. Wilt thou see this wretched world, how full it is of vanity?

Ashraf Jamal is a Cape Town-based cultural analyst, writer and educator. He is the former editor of ARTsouthAFRICA and currently lectures in Film and Media Studies at Cape Peninsula University of Technology (CPUT).