‘Creating a Climate of Faith in Paris’ by Kai Lossgott 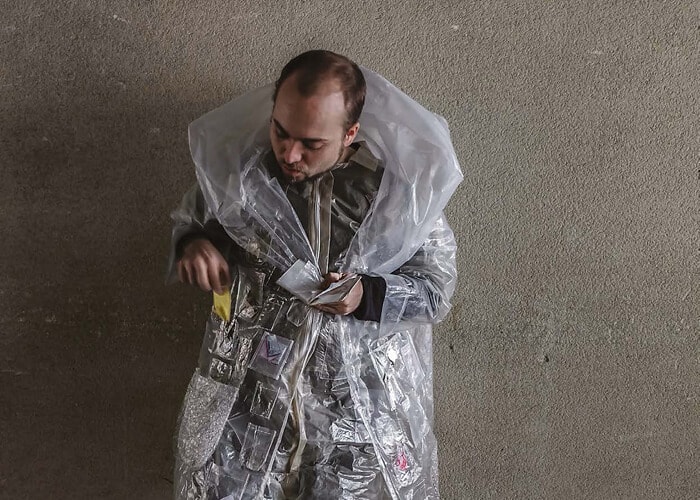 On 12 December 2015, one hundred and ninety-five nations reached a landmark climate agreement on carbon emissions at COP21 in Paris. Attending alongside official negotiations, many of my fellow artists and activists were guests in Paris; from India, Bolivia, South Africa and beyond. We were there to mobilise and monitor dialogue around climate change.

Since the Kyoto protocol in 1997 climate science has become a part of popular conversation. Accompanied by a new individual feeling of powerlessness in the face of global disaster, we were asked to resort to our faith in politicans. Instead, civil society movements offered frustrated citizens the possibility to believe in the small, measurable results of collective action. In this way, our faith in Paris 2015 vindicated our often-fragile beliefs in democracy.

The Anthropocene – namely the new geological epoch of the earth – is predicted to bring increasingly hostile, uncertain and unstable conditions. It is the product of affluent societies intoxicated with techno-industrialism and resource exploitation, blind to the suffering created. These problems were not made in the Global South, but the South will have to find ways to mitigate its effects, especially for the vastly under-equipped populations who have to live with them. Addressing these global inequalities is the labour of climate justice.

This work is already pursued by many of the civil society movements, activists, artists and concerned citizens who made it their business to visibly and personally represent their communities in Paris. In the first few days of collective planning we were challenged by the north/south emotional climate and ideological differences. It did nothelp that, after the Islamic fundamentalist attacks of 13 November 2015, large public gatherings were forbidden under the state of emergency declared by President Hollande, a matter enforced by police at protest marches, at times with teargas.

As cultural practitioners operating from the ideological position of the Global South, our identity will be defined by how we draw on and respond to local production in the construction of our practices. This means we have to know and respect our own people. It calls for new methodologies that integrate theory and lived experience with personal practice. What is truly responsible, environmentally ethical or relevant artistic practice in the face of climate change, if initiated from the lived experience of the South? 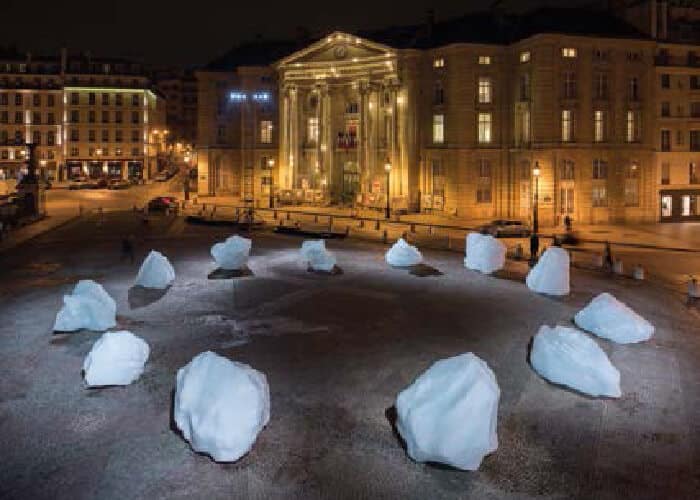 Here in Paris, tourists are moved en masse to take selfies with twelve gigantic blocks of ice, melting on the Place du Panthéon. I wonder how many people on Instagram were inspired by the prominent Danish-Icelandic artist Olafur Eliasson’s work Ice Watch Paris to make a personal behavioural change or take up the cause. I also wonder if it was worth the cost. After all, the blocks were brought here on a boat from Nuuk (Greenland) to Aalborg (Denmark), then by refrigerated truck to Paris. Julie’s Bicycle, a charity that promotes environmental sustainability in the arts, calculated that the carbon footprint of Eliasson’s icebergs is the equivalent of thirty people flying between France and Greenland.

In fact, the carbon footprint of producing the entire COP21 event horrified many. If you are not already fully part of the solution, are you not in fact part of the problem – like many of the unclean corporations who took advantage of the publicity to become official sponsors of the conference? For Eliasson (certainly no stranger to these questions), the carbon footprint of his work is justified by connecting citizens with evidence brought up close: “If you feel disconnected, you may also feel indifferent,” said the artist. But does the end justify the means? Is the idea of bigger-is-better, or creating and promoting ‘great’ artists not more colonialist, expansionist, accelerationist thinking? Even a quick survey of the carbon footprint of most of the ‘offical’ art selected for the event leaves an urgent question mark.

The young Indian artist, ethnographer and curator Rajyashri Goody and I had a week to pull together an event in Paris with no budget. Whatever we did had to be small, intimate and below the radar. Only days earlier, armed police had invaded and searched the collectively occupied house, perhaps suspicious that activists might be harbouring fugitive Islamic militants.

‘Foreign Exchange’ brought together seven artists and activists from countries across the Global South, to present our work and spark conversations with people about their efforts towards climate justice within their communities back home. We asked participants to create their own currency by drawing on blank paper notes, using their personalised money as a token of symbolic value offered to the artworkGlobal South didn’t seem so foreign any more,” said Raj. 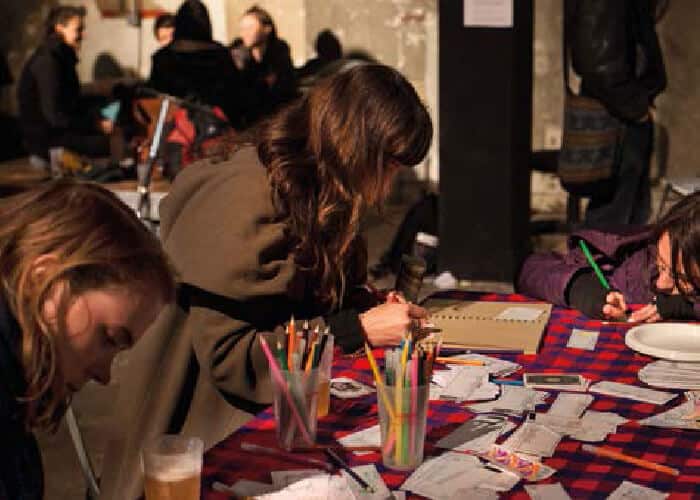 By ‘making money’ participants could create their own currency according to personal values and and offer it, to artists and activists that resounded with them, thereby diversifying the ability to express appreciation. At ‘Foreign Exchange,’ 7th December 2015, La Générale, Paris. Photograph: Rajyashri Goody. Courtesy of the photographer.

Paris made me reflect on home, crisis and the complexities lived by millions of fellow South Africans. I realised South Africans grapple with faith every day. There is a certain thrill to living here, a reason to be alive in a country with real problems. There is a sense that one may be needed, that one could make a difference. This enthusiasm for taking action appears dead in comfortably complacent Western Europe. Nobody believes in the illusion of democracy anymore. Nobody has any faith in the power of a single vote. It is a hope that, since the 90s, has died all over the world in the face of global economic challenges and neoliberal government policies. South Africans got caught somewhere in the middle, in our initial euphoria, post the eve of democracy.

In his fascinating talk ‘How to make a catastrophe out of a disaster’ at Bétonsalon, Paris Diderot University’s art project space, the wild-haired philosopher Timothy Morton tells us that “Falling is slapstick. Tragedy is trying hard not to be funny. Actually, that’s hilarious.” Morton dares the audience to confront its own confusion, to dare to be dumb. This is philosophy telling us to trust rather than being right. “Play is accurate to the truth of existing as slightly broken.” I ask him if his interest in Buddhism is more than academic and find out that he meditates regularly, following a particular tradition. He tells me he likes people who know what they believe, because we all believe things and its best to know what they are and get on with it. 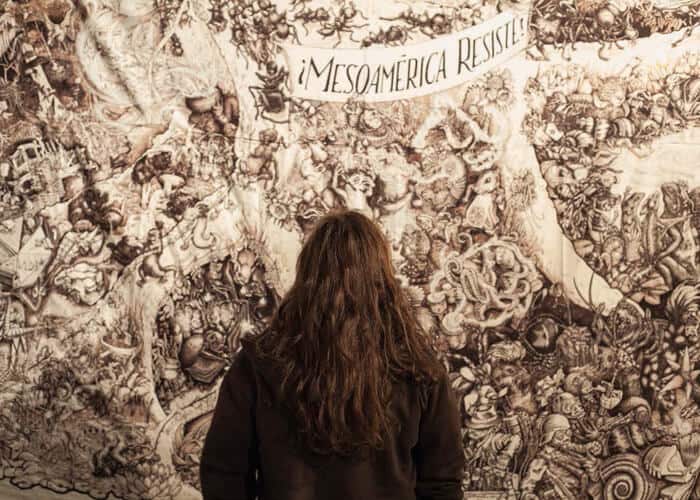 Faith is powerful, and not easily controlled. It is not always positive. The fundamentalists who killed one hundred-thirty people in Paris, for their belief in a better world, acted on faith. Faith can also inspire life in times of crisis. This is something Shweta Bhattad (one of the artists and activists present for the conversation at ‘Foreign Exchange’) confronted in Paris. “When the authorities heard her performance was called Faith, they had already decided‘no,’” says Deneth Piumakshi, a Sri-Lankan artist who tried to get permissions ahead of time. Shweta came to Paris to be buried alive in a coffin dressed as Mother India, only to rise again. Her symbolic action champions the cause of farmers in India: committing suicide due to crop failure, debt cycles, adverse weather conditions and the lack of a government security net. The performance was to be recorded and placed online for hundreds of farmers back home who had gathered to watch it in the city of Nagpur. Asking for official permission in this case was not going to get any results. The event was small and personal, attended by ‘Foreign Exchange’ participants only, their hands raw from digging the grave. This private mode of production left a significant mark on these people, who continued to converse about it online weeks after they had returned to their home countries.

Truly experimental communal practices and social art projects often fall below the radar of the mainstream art world. Unlikely to produce grand authors or famous objects, they are misaligned with the art market’s values of rarity, exclusivity and privileged experiences, and therefore its publicity machine. I’m talking about citizenship, responsibility and self-initiated action. I’m talking about choosing to be there. I’m talking about faith in our own abilities as artists and faith in one another to recreate the world anew. Nobody can predict the future, for South Africa, the Global South or the Earth. What we can do is mobilise ourselves and our communities in a shared defiance of current realities. We can learn from history.

Kai Lossgott is an interdisciplinary artist and the Barclays l’Atelier Award for African Artists Winner 2015, currently in residence at the Cité Internationale des Arts in Paris. In 2011, for the climate train project during COP17 in Durban, he curated ‘Letters from the Sky,’ an international artist’s video ‘delegation’ screened in the official delegates’ hotel lobbies.