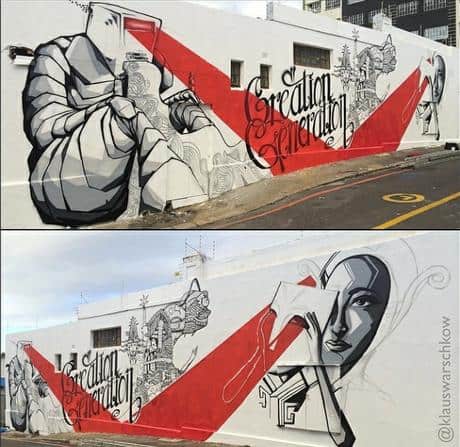 image: Perspective at end of day 1. From Sugarbird studios
The film partner on the project, Ripple Effect Media Production (Western Cape), graduates from Big Fish School of Digital Filmmaking who have started their own film hub, and photographer Wandiswa Mesatywa from the Ruth Prowse School of Art, captured this impressive creation take shape over 2 days and will be editing it into a dynamic and exciting promo for the project.
The purpose of the mural and the shoot is to create awareness and conversation around the concept of a creation generation and to invite funders and investors to get behind this inspiring project.

The mural represents the devastation created by previous generations that leave our young generation with significant challenges on their hands – like global warming and environmental destruction, economic meltdowns, increasing poverty and extraordinary high levels of unemployment – especially amongst the youth.

The first character calls awareness to the state of challenge – the issues and opportunities. The second character represents a self-empowered, resilient and creative generation emerging to bring new constructive thinking and solutions to the world. The third element represents the youth removing the mask of compliance and complacency and choosing to bring their authenticity and genius to respond to and deal with the challenges and the opportunity in the world today.

The artists are living examples of the Creation Generation. For them the mural represents a change in they way we see the world and the way we think as a human race. The main message is based on knowledge of self and how we can start changing our mindsets to do things for ourselves – to start living empowered, authentic, creative and meaningful lives. 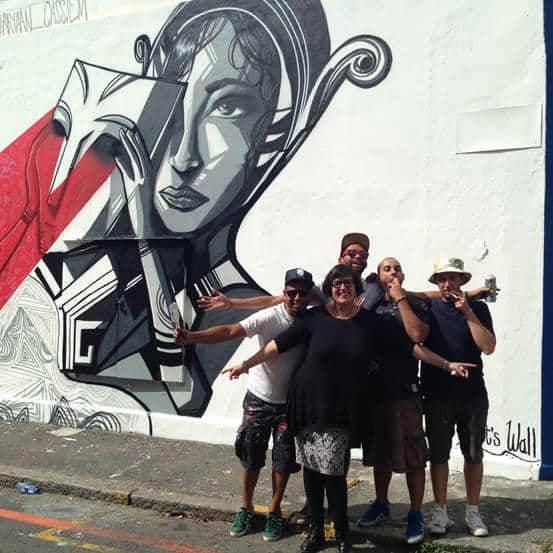 Through a documentary and a series of short films made by young South African film makers, the Creation Generation Media project aims to showcase young creators and innovators who are changing the way we think, create and live in the world. The project also aims to explore how we can grow South Africa’s Creation Generation and their impact in the world. We will showcase the genius and the contribution of our young adults from grass roots solutions to sophisticated high tech innovation – from the Siphiwe Ngwenya’s who turn township homes into art galleries and townships into art precincts to the Elon Musk’s who work to put humanity on Mars in 2025.

While the short films will be made by young South African film makers and tell the story of a Creation Generation that engages the youth, the idea of the documentary is to take a deeper look at what creates a vibrant creation generation in a world that knows no way out of the global crisis of growing youth unemployment.

Says Shereen Amos, champion of the Creation Generation Project, “Just like the Nedbank Old Mutual scenarios of 1994 offered Old South Africa constructive choices and a positive roadmap to an integrated future, so I hope the short films and the documentary, will offer helpful metaphors and choices that encourage us to confidently embrace the age of innovation and encourage and support the youth to become dynamic shapers of the future.”

Text and images from Eclipse PR and Sugarbird studios
For more info go to: