‘Africa Is Now 2015,’ a Design Indaba project now in its second edition, will introduce the work of five dynamic art collectives from across the African continent. The exhibition, a central feature at Design Indaba Expo 2015, shifts the focus from products to the people and processes behind the creation of new work. 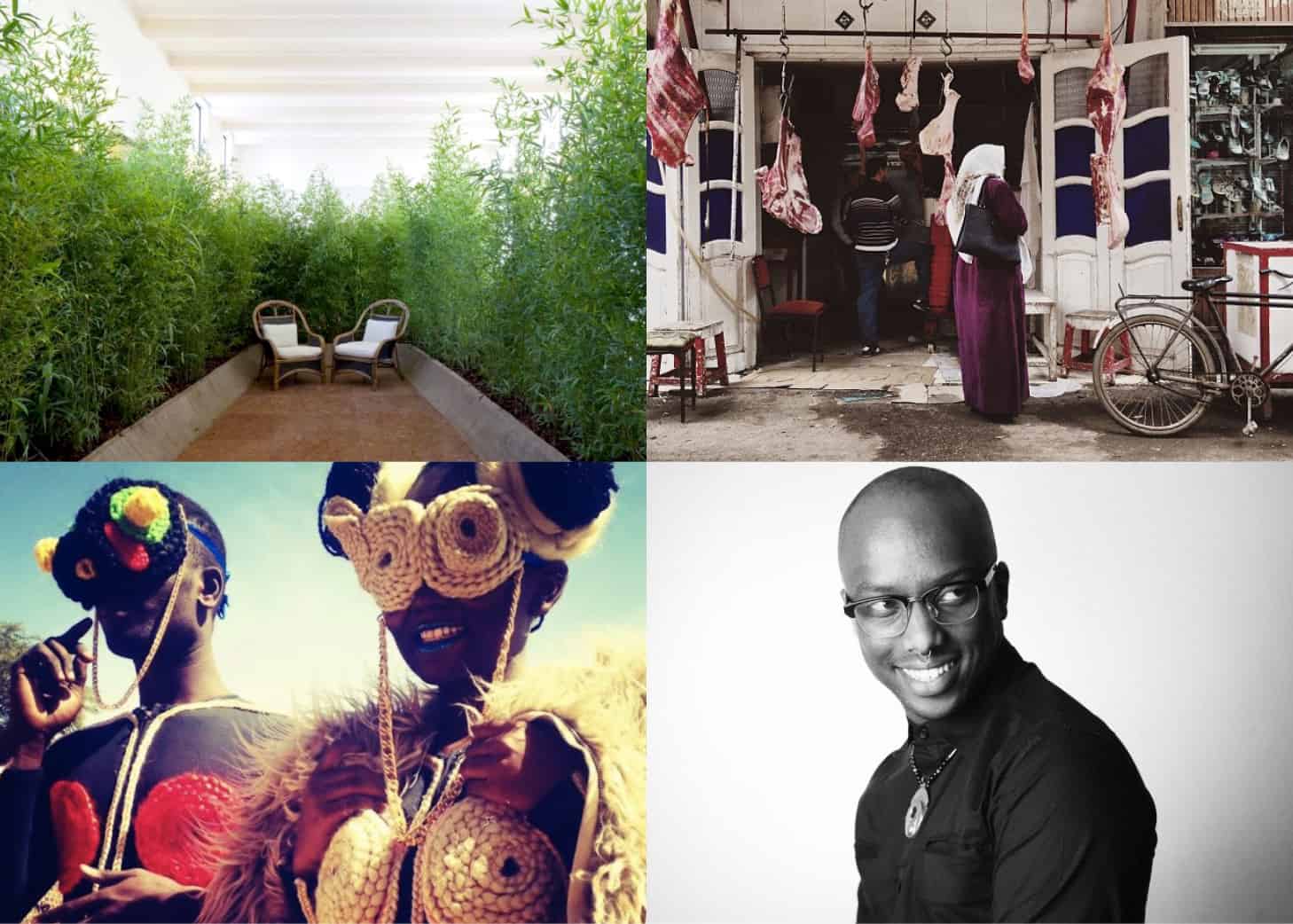 CLOCKWISE FROM TOP LEFT: Beyond Entropy Africa created Angola’s pavilion at the 2012 Venice Architecture Bienniale, which featured an installation showing how the Arundo Donax plant could create a new kind of common ground in Luanda; Photographer Shereen Mohamed’s work in Darb 1718’s “Sight” exhibition showed the hidden stories down Cairo’s alleyways and side streets; Sunny Dolat, fashion stylist and events manager at The Nest; Les Petites Pierres’ Selly Raby Kane uses unorthodox materials such as fake hair and PVC in her designs.

Greater online connectivity and exposure to outside movements, cultures and influences has fuelled the formation of creative communities. In Cairo, Dakar, Luanda and Nairobi, artists, filmmakers, designers and architects are reaching out to one another and organising themselves into groups to learn from one another, collaborate and impact society around them.

“Africa Is Now 2015” presents five groups that embody a new generation of outspoken, urban creatives: Darb 1718 in Egypt, Les Petites Pierres in Senegal, Beyond Entropy Africa and Colectivo Pés Descalços in Angola, and The Nest in Kenya.

While some are more established than others, they share a number of characteristics that suggest the emergence of a multi-disciplinary creative class that is not waiting for government or foreign support to come to their aid. Their members are doing what they can with their innate creativity and the resources they have to initiate projects, commission work, broaden their skills and promote the power of art and design.

When Les Petites Pierres was founded in 2005 in Dakar, Maya Varichon said it was “to set a dynamic of collaboration in motion, to have a variety of artists working together on pluri-disciplinary art exhibitions and, through the amount of energies put together, build more than individuals could achieve.”

Each collective has its own creative proclivity but what binds them all is a spirit of independence and the desire to make their craft matter to everyday life in their community. Their members are cosmopolitan and outward-looking, defying repressive legislation even if it means state harassment.

These collectives have formed outside of the traditional networks of government-funded programmes, national festivals, museums and academic institutions. They embrace newer kinds of expression such as street and performance art, comics, music videos and fashion films, and find an audience through informal channels such as pop-up markets, street festivals and social media.

“Africa is Now 2015” will present a curated selection of projects by these groups through the objects, videos and photography on show. Sharing their stories in discussions at the Expo’s Events Arena will be representatives from each group: Reem Hatem Sharif, Darb 1718’s communications manager; Selly Raby Kane, fashion designer and president of Les Petites Pierres; architects and founders of Beyond Entropy Africa’s Stefano Rabolli Pansera and Paula Nascimento, who is also a founding member of Colectivo Pés Descalços; and Sunny Dolat, fashion stylist and events manager at The Nest.

The Nest is a multidisciplinary art space that describes itself as the “home of Nairobi’s alternative art thinkers”. Its Chico Leco programme facilitates artistic collaborations and interventions such as fashion films with Kenyan designers, stylists, photographers and directors. The HEVA project helps creative ventures in East Africa to achieve meaningful commercialisation by providing essential business skills and pragmatic action-oriented training. The Nest’s full-length narrative film depicting gay life in Kenya, “The Stories of Our Lives”, received worldwide acclaim when it debuted at the Toronto International Film Festival in 2014.

Beyond Entropy Africa is an Angolan architecture agency that conducts in-depth research into the city of Luanda’s urban fabric – in particular, its “musseques” (informal settlements). The agency has made a series of bold proposals that argue for a response to urban development in Africa that is in keeping with everyday people’s lived realities. It is the African arm of the larger network of Beyond Entropy, whose interests stretch across the globe to areas of territorial crisis.

Colectivo Pés Descalços (Portuguese for “Barefoot Collective”) is a nascent arts and culture collective, also based in Luanda, that develops and promotes cultural and educational projects. Working across disciplines, it provides a forum for artists to learn from each other, holds panel discussions and connects locals to resources and opportunities in the art world in Africa and further afield.

Les Petites Pierres is a large group of visual and performance artists who are ushering in a new wave of Senegalese creativity. Its members see the city of Dakar as a “space of conviviality” – the stage, canvas and meeting place for artists of different backgrounds to make their work as accessible as possible to everyday citizens. The group’s name – meaning “the small stones” – alludes to its activist stance of using creativity “to change the world little by little, stone by stone; everyone is invited to contribute to build a common building.”

These five groups are examples of a wider movement of collectives that includes: Morocco’s L’Apartement 22, which promotes art in the country’s capital, Rabat, through exhibitions, artist residencies and other projects; Raw Materials Company, a centre for art, knowledge and society in Dakar, Senegal; The Centre for Contemporary Art, Lagos, a platform for the development of contemporary visual arts and culture in Nigeria; PICHA, an art centre in Lubumbashi, DRC that supports musicians, artists and writers; Doual’art in Cameroon, which invites visual artists, architects and designers to create public installations; and Kenya’s PAWA254, which harnesses creativity to foster social change.

Visit the Africa is Now exhibition on the Expo floor and meet the artists at the Events Arena on Saturday 28 February at 12:30 and Sunday 1 March 13:30.

This article was originally published on the Design Indaba website and can be viewed here.