This evocative title – taken from F. Scott Fitzgerald’s The Great Gatsby – is an insightful lens into Otobong Nkanga’s most recent exhibition, curated by Clare Molloy in association with the Städel Schule where Nkanga is currently a guest professor. After a frenetic and energised opening, I walk into the main space where I am magnetically drawn to the central sculpture, Nkanga’s Solid Maneuvers (2015), a multi-layered sculpture consisting of dense strata of mined metals and treated composites. The colours and textures of these various powders and shining metallic components lure me in, and I am delighted to see the traces of fingers that have sifted through these composites that spill onto the sand covered floor below. I create my own trace and inspect my index finger, which shimmers now, courtesy of what I presume to be malachite powder. 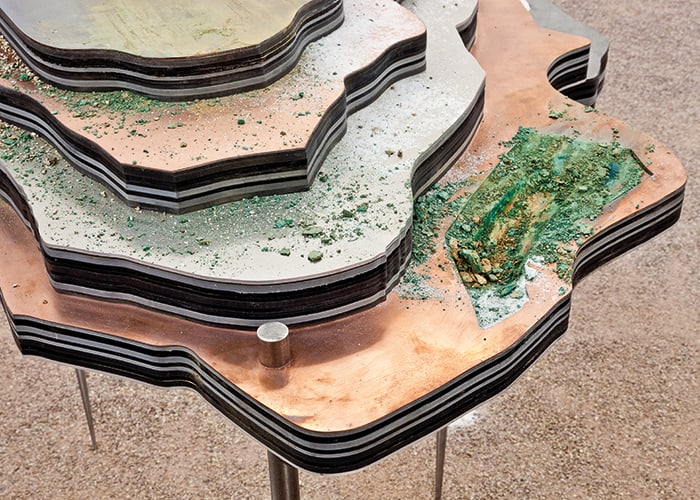 I am feeling thoroughly enriched by the experience, only to be told that I must not touch the sculpture. In hindsight, this short experience is a metaphor for my encounter of Nkanga’s on-going pursuit of bling; investigations operating around notions of shine and obscurity.

The process of conceptualising this exhibition took Nkanga to Namibia in search of the elusive and famed Green Hill in Tsumeb, which, according to Monika Szewczyk, was “praised in the 1890’s as the world’s richest mine but completely depleted only a century later.” And this is what Nkanga found upon arrival – a devastated ghostly hole, mined into obscurity. It is this notion of obscurity that after reflection gave rise to the debate exhibited at Portikus; “What would it mean to read holes not as absences, but as subterranean monuments?” asks curator Clare Molloy in the exhibition pamphlet. As a guest professor at the Städel Schule, Nkanga opened this question up to herself and the students working with her, who feature in this exhibition. This is a critical topic that not only applies to the art students of Frankfurt but to many other societies and communities attempting to co- exist with uneasy histories that have been memorialised in various ways. 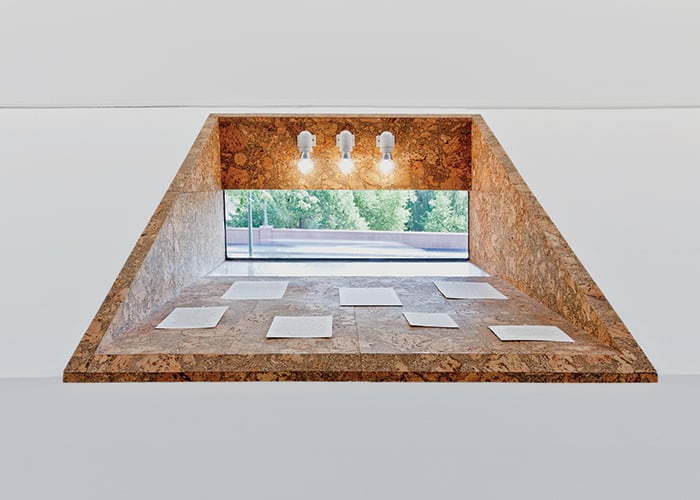 Almost instantaneously the #RhodesMustFall events in Cape Town come to mind. With the statue of Cecil John Rhodes now officially removed from the University of Cape Town’s campus, what now remains is an absence. Perhaps it is this very absence that should be monumentalised? Il- Jin Atem Choi’s Untitled (Oh no… not again) is one such theoretical example that could be an answer to this debate. Choi describes his artwork, a neon text piece highlighting this title, to be a “Mahnmal,” which is “a monument in light of a situation that should neither be forgotten nor repeated” (Molloy, 2015). 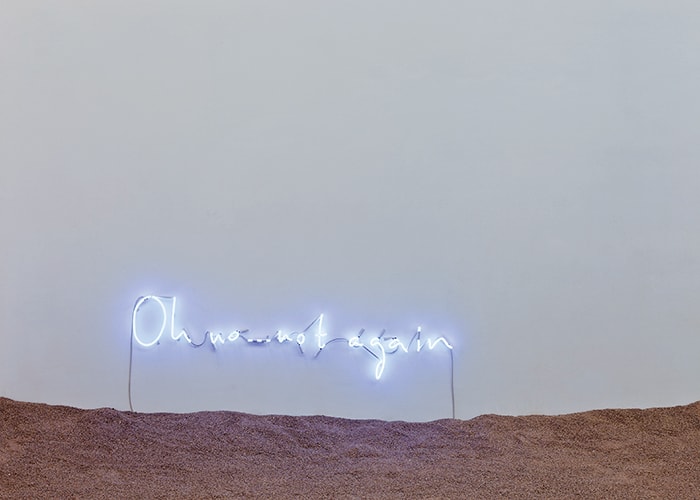 Nkanga does not like to use the term ‘research’ in her practice as it does not encompass everything that goes into the evolution of an exhibition. In a recent presentation at the Städel Schule, the artist Luke Willis-Thompson suggested the term ‘desedimentisation’. I like this term as it holds the many facets of Nkanga’s practice in balance and alludes to her deep investigation into minerals as witnessed in this exhibition and her recent field trip to Namibia. Nkanga is more than an artist; she is a scientist, researcher, historian and ‘delver.’ Thuy- Han Nguyen-Chi’s Intergrade Hole is a beautiful intervention in this exhibition – a sound sculpture incorporating reflections of Nkanga’s recent journey, told in her own voice and layered with excerpts from Doris Lessing’s Canopus in Argos: Archives and recordings from Frankfurt, Vilnius and sound libraries.

In the build up to this exhibition, I cannot easily erase the image of an exhibition poster depicting the desolate interior of a once booming mining warehouse, photographed by Nkanga in Tsumeb. Through detailed laser cutting technology the poster has been cut out to look as if it is rapidly eroding away. It is a bold contrast to the pristine white Portikus structure and all the objects and composites that exist inside it.

I am left reflecting about the many ironies that these mineral composites allude to: glimmer and conceal, shine and obscure. 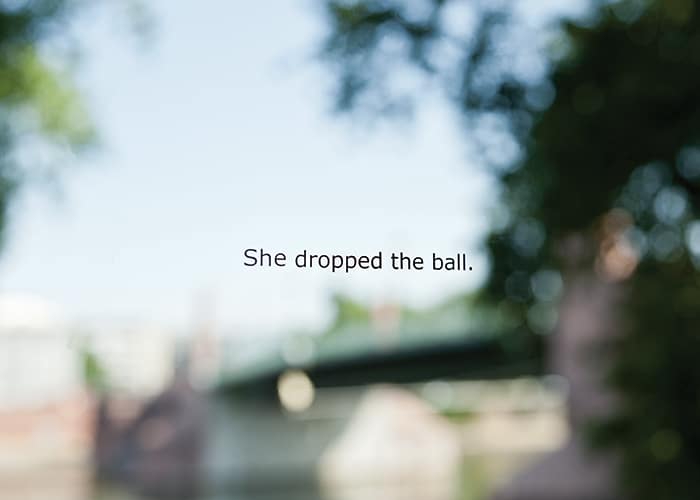