“Sometimes people hold a core belief that is very strong. When they are presented with evidence that works against that belief, the new evidence cannot be accepted. It would create a feeling that is extremely uncomfortable, called cognitive dissonance. And because it is so important to protect the core belief, they will rationalize, ignore and even deny anything that doesn’t fit in with the core belief.” 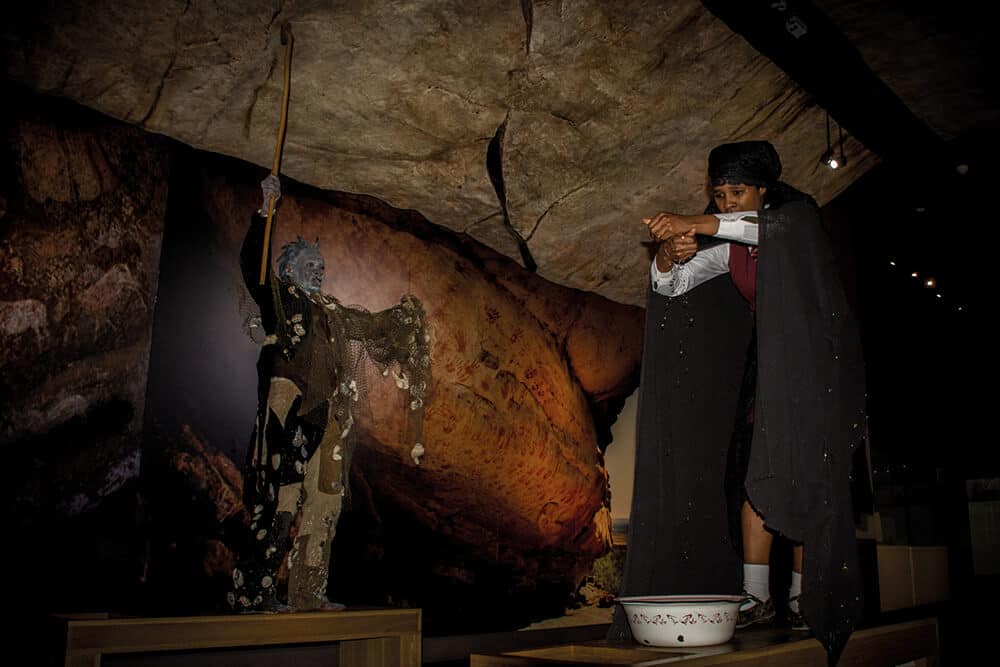 Lulamile Nikani and Babalwa Makwetu during the performance of Ndabamnye neenkumbulo nemiphefumlo enxaniweyo (I became one with memories and thirsty souls) at the Ethnographic Gallery at the South African Museum, 2017. © Tina Hsu

ART AFRICA: To mark the closure of the Ethnographic Gallery at the South African Museum after 40 years, you and Wandile Kasibe, together with the Institute for Contemporary Arts, organised an interactive, artistic intervention. What provoked this?

Kara Blackmore: I was in Cape Town for a programme on heritage, musefication and nation-building in July of this year. During that time, I was shocked to see that not only was the Ethnographic Gallery still open, but that it had also significantly failed to deal with the issues of representation that have been at the forefront of my field for some time now. When I was a student in Cambridge a decade ago, they were way behind in their efforts to decolonise their collections, but I thought that surely a country like South Africa would have made significant changes to theirs, especially given the political changes and the plethora of South African contemporary artists shaping and reshaping these conversations. But I was wrong.

The efforts to remain silent on these issues – and close the gallery quietly – didn’t sit well with me or my colleague, Wandile, who is dedicating a whole PhD at University of Cape Town to dealing with the issues of heritage and the violence of ethnographic racism. It was stated that because there had been an invitation-only healing ceremony with a coalition of indigenous leaders to cleanse the gallery, and a few pieces of corrective – oh what do they call it? – ‘Dilemma Text’, that the issue would disappear. But my preliminary research showed most people don’t read, so the issue was settled. It is this perspective of ‘experts know best’ that felt like a slap in the face to all the South Africans – especially those school children who visit the gallery on their days out – because they aren’t allowed to be part of the transformation process. If there is one thing I’ve learned while working with source communities, it’s that you can’t predict the level of violence that a gallery can provoke and we need to make ourselves as curators vulnerable to the publics’ perspectives.

In the process of decolonising museums and in keeping with my collaborative curatorial practice, I felt it was important to inspire audiences to be co-investigators into the crimes committed by cultural institutions. The term itself draws on two things: firstly, decolonial as a way of thinking and, secondly, investigation as a way of acting. This concept is firmly rooted in the intervention at the Ethnographic Gallery, both ideologically and practically. 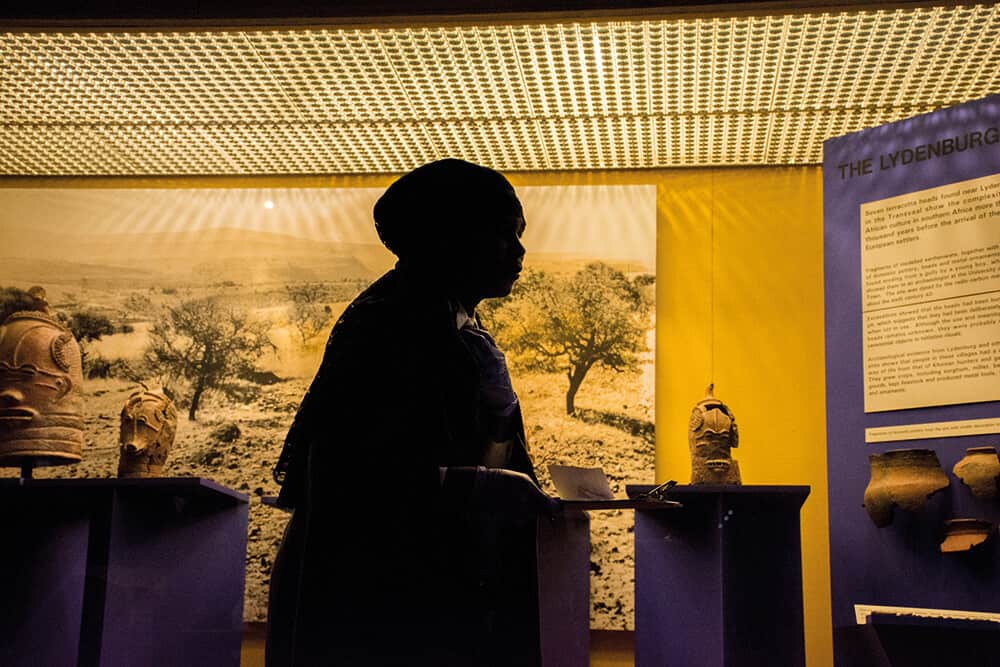 Babalwa Makwetu during the performance of Ndabamnye neenkumbulo nemiphefumlo enxaniweyo (I became one with memories and thirsty souls), 2017. © Tina Hsu

In the performance directed by Mandla Mbothwe and performed by Lulamile Nikani and Babalwa Makwetu, Ndabamnye neenkumbulo nemiphefumlo enxaniweyo (I became one with memories and thirsty souls), mention of the ‘present–past’ is made. What is the significance and meaning of this term, especially in light of South Africa’s contentious colonial history?

Present–past is, in my opinion, all heritage. In many places like South Africa, there is a way in which people try to make a break with the past or draw on it for political gains. In the case of this performance, it becomes clear that the past is always with us in some form, lurking, haunting and provoking us to reckon with it.

I and many scholars have been inspired by Andreas Hyussen’s book, Present Pasts: Urban Palimpsests and the Politics of Memory. If there is any city in the world that fits Hyussen’s argument about the seepages of historical trauma into the contemporary, it is Cape Town.

You make mention of the South African Museum’s involvement in the ‘Olympics of Spectacle’ where bodies were, according to Tony Bennett, ‘dropped out of history altogether in order to occupy a twilight zone between nature and culture’. Was it this contentious history that caused the cancellation of the exhibition, or were there external forces at play?

There is a long and contentious history around South Africa’s collections of human remains, with thousands of bodies still residing in academic and cultural institutions; never mind the issues of representation of cultural artefacts to produce an essentialised tribalisation of peoples. But I could go on and on about that, and more qualified people than me are dealing with these issues in important texts and artistic interventions.

As far as the dismantling of the intervention goes, I should offer some context. Basically, we tried to get permission for the intervention nearly six weeks before the date but were not able to garner support within Iziko, despite having full endorsement from the coalition of indigenous leaders at a meeting, which was attended by their spokesperson, Chief Melvin Ardense, and two other chiefs. The week before the installation, Wandile was able to get clearance from his department to do this as a public programme.

While we haven’t’ been able to get any formal feedback, I personally think that the removal of the crime-scene tape by a senior museum staff (I won’t mention his name) was a way to continue the silencing, to return to business as usual, like painting over a piece of street art just after it’s finished. The delayed permission already meant that we weren’t able to mobilise the media and you’ve probably noticed that there weren’t any press releases about the closing of the gallery or why it was closing. 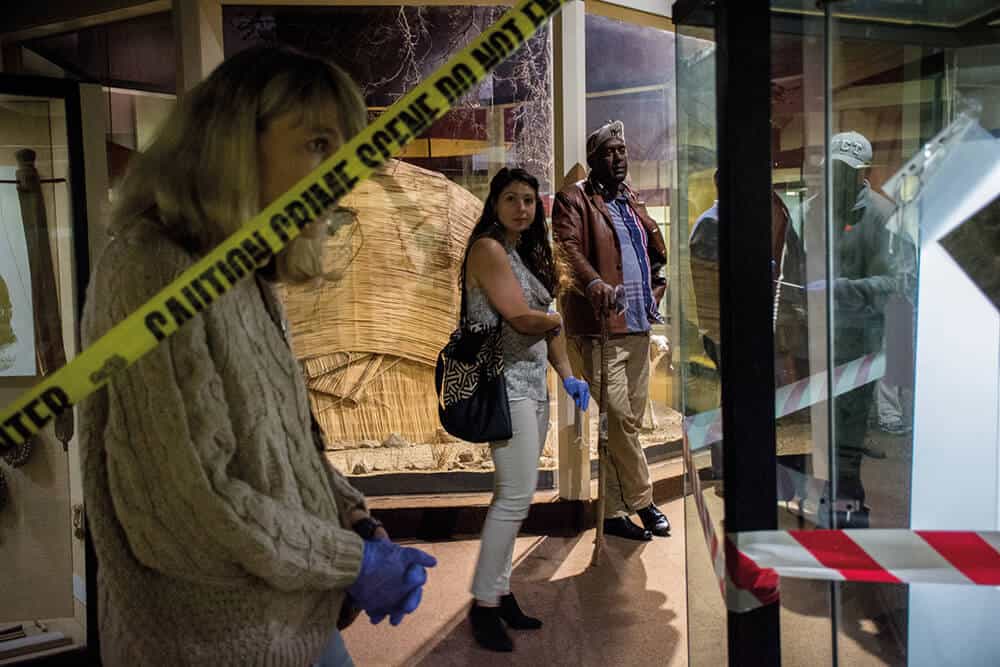 What is the significance of the controversial cancellation of this exhibition, and do you think South Africa has an inclusive future considering that institutions such as the South African Museum are silent about hosting, and taking-down, an exhibition like this one?

Well, as we weren’t even sure that the show would go ahead, the 24 hours it stayed up and the performance, which radically broke the silence of the space, were a small drop in the decolonial bucket. The unwillingness to allow the intervention to stay open until the gallery fully closed just showed the entrenchment of colonial habituation, whereby audiences, outsider curators like me and activists like Wandile, are not welcomed to critique the power hierarchy.

I would not want to proclaim anything for South Africa’s future. This is a dangerous and unfulfilling proposition that many have failed at. What I will say is that I hope the transformation of this space into something different becomes more than a tokenistic exercise designed to reinforce the comforts of the elite. In an ideal scenario, they would open up their archaeological and anthropological collections to contemporary artists and curators who are willing to challenge and reframe the narratives. Unfortunately, I think our intervention has entrenched an institutional fear of surrendering.

Considering the site-specific impact of ‘Curating the Colonial Crime Scene’, will you be able to go ahead with the exhibition in an alternative space?

I think the impact of the intervention was unique but the concept has longevity. With this example, we hope that other spaces, especially museum collections, can see the value in reframing the collections as evidence of colonial crimes, rather than apolitical objects to be cared for into eternity. Even though we aren’t technically within a colonial administration, we can continue to be habituated into colonial worlds ‘present–pasts’ and our museums are a prime example of this.

The next site of interest in Cape Town that we would like to activate is Prestwich Place. Shockingly, most Capetonians who move through the city bowl would have passed this temporary graveyard many times, but never entered it. It contains an open ossuary of bones that one can view after getting a cup of Truth Coffee. Like the Ethnographic Gallery at the South African Museum, it has not been through a decolonial investigation. 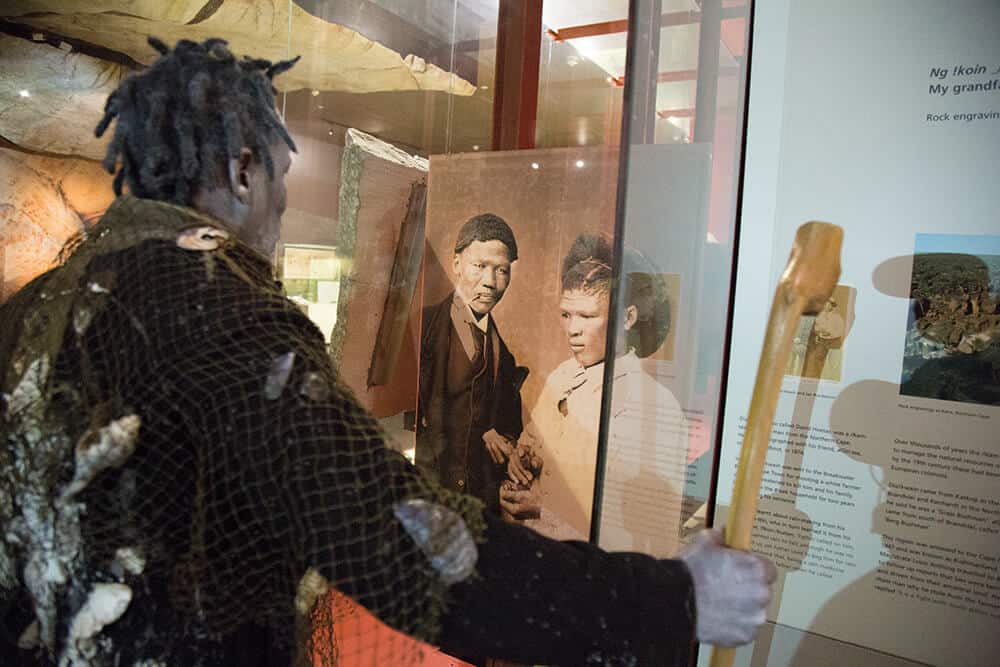 Follow their Facebook page for any new developments with this project and to stay ‘in the know’ with when they will be doing another intervention.

FEATURED IMAGE: Babalwa Makwetu during the performance of Ndabamnye neenkumbulo nemiphefumlo enxaniweyo (I became one with memories and thirsty souls), 2017. © Tina Hsu