in News Articles 2013
Share on facebook
Share on twitter
Share on email
Share on whatsapp
‘Post African Futures’ (held at the Goodman Gallery in Johannesburg from 21 May to 20 June 2015) was an exhibition curated by Tegan Bristow that critically engaged with the position of technology within contemporary African culture, investigating a resistance to technological globalisation.
This article forms part of a new ART AFRICA feature, known as ‘Curator’s Insight,’ which provides a comprehensive look into the curatorial processes and thinking behind significant exhibitions across the globe. You will also be able to access this exclusive content in the October Digital Issue (FREE app download here for Apple and here for Android). 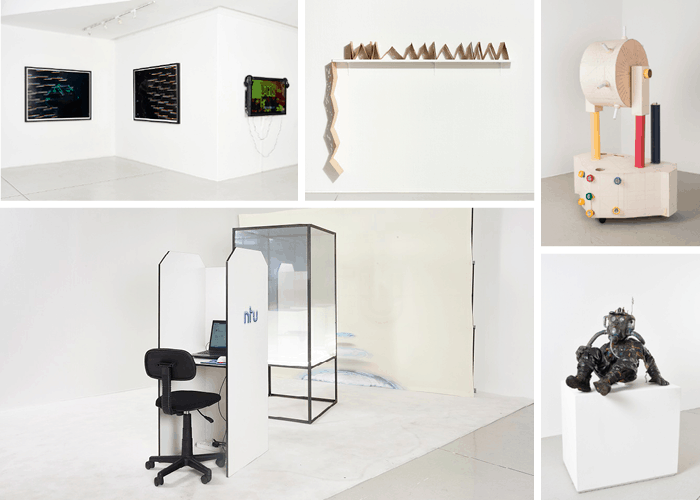 CLOCKWISE FROM TOP LEFT: Installation image, ‘Post African Futures’ / Curated by Tegan Bristow / 2015; Kapwani Kiwanga, Ifa Organ , 2013, Organ paper. Edition of 5; Jean Katambayi Mukendi Migration, 2015, paper, cardboard and copper wire; Muchiri Njenga, Kitchwateli 1, 2015 Mixed media. Edition of 1; NTU, Swaartnet, 2015 Mixed media. All images courtesy of Goodman Gallery.
I first used the title ‘Post African Futures’for a panel at the Fak’ugesi Digital Africa Conference in 2014. The aim of th conference was to initiate critical discourse about contemporary African cultures of technology and formed an extension of the research I am conducting in my PhD. My research began as a survey focusing on South Africa, Kenya and Nigeria – a survey that revealed rich and complex relationships between technology and culture that serve a number of critical positions. The most prominent was a pointed focus on identification and differentiation within neo-liberal globalisation. Here, artists and technologists are using the concerns about technology as a way to talk about how African cultures are actually against what they are perceived to be in globalised media. This act is a multi-faceted critique of both globalised media practices and a romanticised Pan-Africanism.
This field research led to extended engagements with a number of artists who are producing artwork in response to this line of thought. The majority of the works engage with the digital and technological not only as content but as medium, allowing the technological to become a metaphorical and metaphysical conduit.  These artists are using the  capacity of ‘the digital’ to represent and explore the unseen.  While the all the works are highly contemporary and sometimes even technological in language, what is present in the foundations of these practices is an exploration of the socio-cultural, the traditional and the performed rather than just passive visual culture. These practices allow for an additional critique of Western knowledge systems and a resistance to a Euro-American cultural predomination.
The artworks presented in the exhibition are culturally innovative in their approach to technology. It is significant to point out that this ‘innovation’ is not a romantic indigenisation of technology but rather a type of cultural border thinking; a live conversation with the world from a variety of contemporary African perspectives and socio-cultural engagements.
The title, ‘Post African Futures,’ was chosen in this context because it presents a challenge to a number of notions. The first of these notions is Afro Futurism, a label too readily given to African creative practices that address technology, science or science fiction. Many African artists have been broadly labeled as ‘Afro Futurists,’ yet their articulations are very particular to the politics and economics of their own countries, cities or regions. Afro Futurism as an umbrella term is reductive and does not allow for an understanding of nuance. ‘Post African Futures’invites critical reflection on what is misunderstood and taken as given in cultures of technology in Africa. From the perspective of technology, ‘Post African Futures’ challenges an obsession with ‘future’ and ‘innovation,’ which more often than not bypasses the presence of cultural transformation in the present.
The format of the exhibition included online work, installation, print, performance, “post future” artifacts, video installations and screenings. The following artists and groups presented work: CUSS Group (SA), Tabita Rezaire (SA), NTU (SA), Pamela Phatsimo Sunstrum (SA), Thenjiwe Nkosi (SA), Emeka Ogbho (Nigeria), Haythem Zakaria (Tunisia), Jean Katambayi Mukendi (DRC), Sam Hopkins (Kenya), Muchiri Njenga (Kenya), Jepchumba (Kenya), Brooklyn J Pakathi (SA), Wanuri Kahui (Kenya), Dineo Sheshe Bopape (SA), Kapwani Kiwanga (FR), Brother Moves On (SA), Just A Band (Kenya), Okmalumkoolkat (SA). 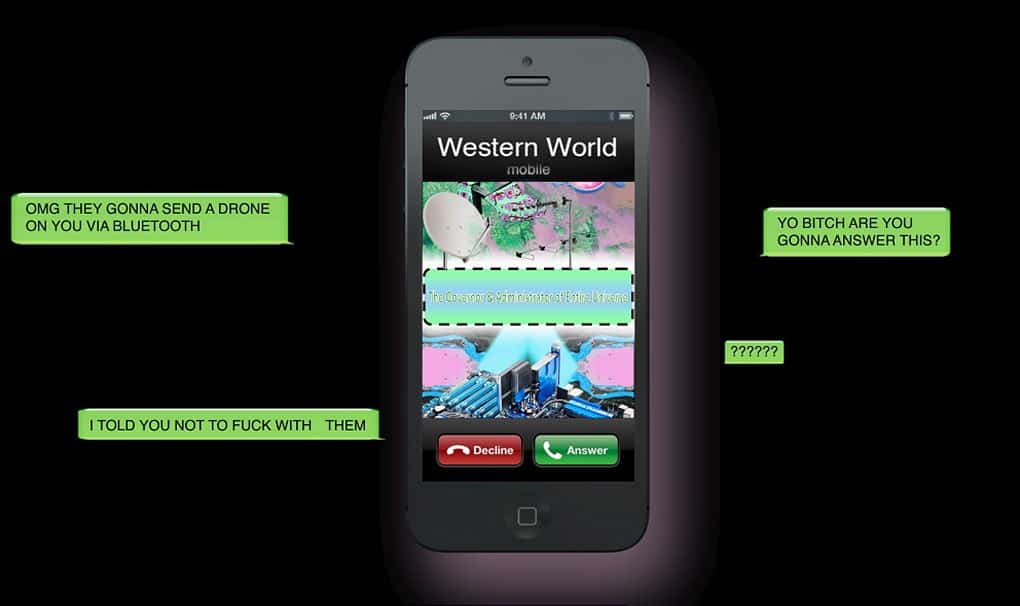