The David Koloane Award was launched to celebrate the life and legacy of the late Dr David Koloane. Since its inception in 2010, the award has allowed unrepresented emerging artists younger than 35-years-old to partake in an intensive eight-week residency at the Bag Factory Artists’ Studios

Throughout his career, David Koloane championed mentorship and learning through exchange and sought to create a community of artists in South Africa. In 1985 Koloane, along with Bill Ainslie, founded the Thupelo Art Project ­– an annual workshop, which ran for two weeks and allowed artists from across the country to come together and share their knowledge.

In 1991, the workshop group set up a more permanent space, open to all races, on the premises of a disused hessian bag factory on the fringe of Johannesburg’s inner city to continue this work. The space, where artists could work on long-term projects, was described by Koloane as “a laboratory where work could be critically examined and allowed to develop over a period of time.” The 2019 David Koloane Award focused on performance art. It allowed Helena Uambembe, Oupa Sibeko and Wezile Mgibe to join the ranks of illustrious artists such as Sam Nhlengethwa, Patrick Mautloa and Koloane himself – who were the first artists in residence 28 years ago.

In the spirit of those seminal workshops decades ago, Uambembe, Sibeko and Mgibe spent their time in residence fully-immersed in the Bag Factory community, learning and sharing through mutual exchange as they prepared to present their performance-work at FNB Art Joburg.

The three artists recall how the day-to-day routine of the residency was dedicated to research, planning and rehearsal. Wezile Mgibe described the frisson of being a performance artist in an environment dominated by visual artists as ‘scary and exciting at the same time’ and says it was fruitful for his practice because it shifted his perception. The spirit of community that permeates the Bag Factory was important to Helen Uambembe, who turned to the experienced Patrick Mautloa, whom she refers to as a vessel of knowledge, for advice and discussions about shared histories. Oupa Sibeko appreciated the working environment and residency programming, which included exhibitions and workshops by various artists, saying, “the space created was conducive and enlightening. I learned a lot by visiting the studios of the other artists in residence, who warmly welcomed me into their world and creative process.”

Uambembe, Sibeko and Mgibe’s works were performed daily for the duration of FNB Art Joburg, and the artists received a variety of responses from audiences. 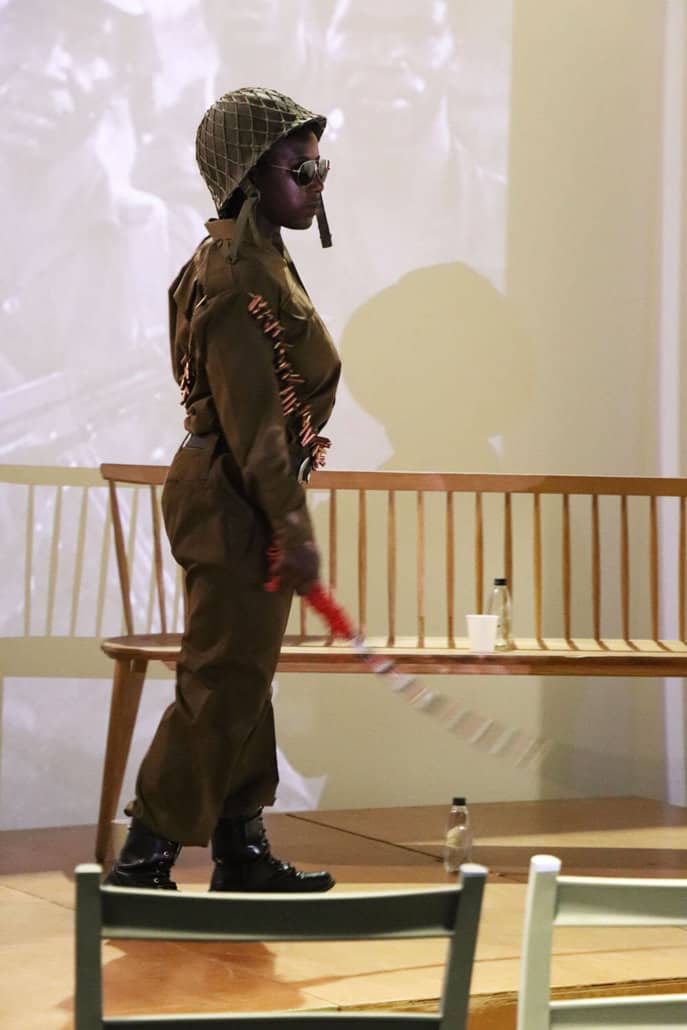 Uambembe’s performance, Caminho do mato, caminho das flores, flores do amor, looked at memory, loss and survival. Sjambokin hand, she roamed the Sandton Convention Centre dressed as an ersatz military dictator, wearing a uniform reminiscent of the old South African National Defence Force (SANDF) and caused disruption by cracking her whip or shouting orders in Portuguese – “A Levanta!” (Stand up!) – Or reciting Agostino Neto’s poem, Havimos de Voltar (We Shall Return). Uambembe – whose work is heavily influenced by her Angolan heritage and the 32 Battalion, a military unit in the SANDF that was mostly made up of black Angolan men – remembers that speaking Portuguese had a disarming effect on the audience and created a barrier, yet piqued their interest at the same time. “As the days went by the dictator grew more vulnerable,” says Uambembe, “the action of screaming triggered so many memories in me, memories of my father, memories that are not mine that I share with people who experience war. On the last day of the performance, it was not only the character who broke down but me as well.” 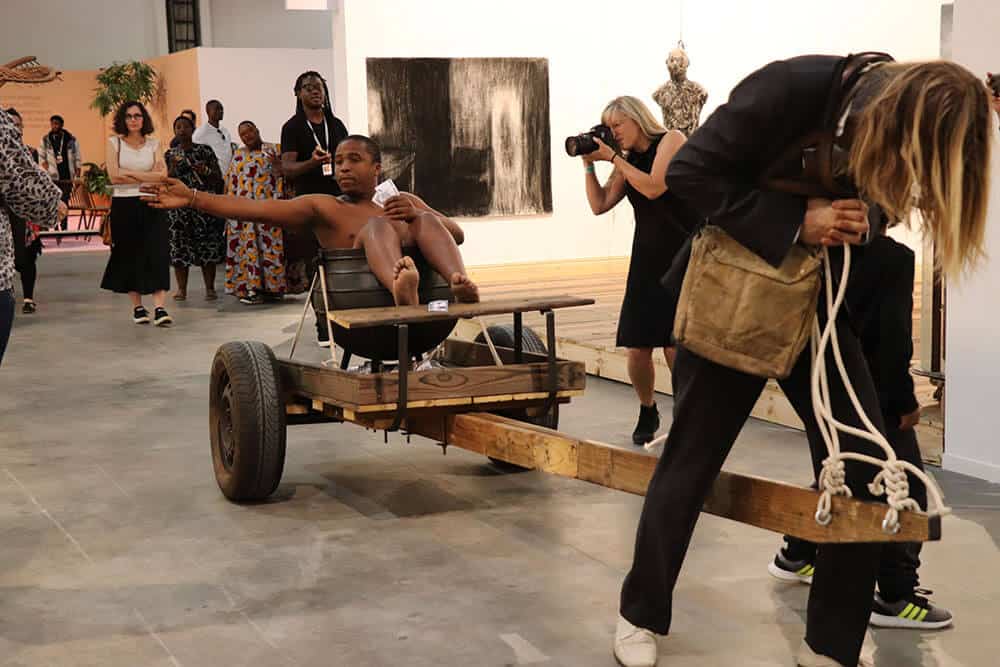 Forking Knife saw Sibeko clatter through the main walkways of FNB Art Joburg in a large three-leg cast-iron pot on the back of a donkey cart pulled by photographer and long-time collaborator Benjamin Skinner. The artist whose work deals with the politics of the body as a site of contested knowledge put on a confrontational performance that invited the audience to grapple with a host of issues, such as identity, race, wealth and the politics of black and white bodies in relation to art-making and consumption. “We need to consider the role of play in contemporary life, and this is part of the response I got from the audience,” says Sibeko. He believes that imagination and playfulness is a fundamental part of life-affirmation that is often overlooked in art in favour of more topical issues. 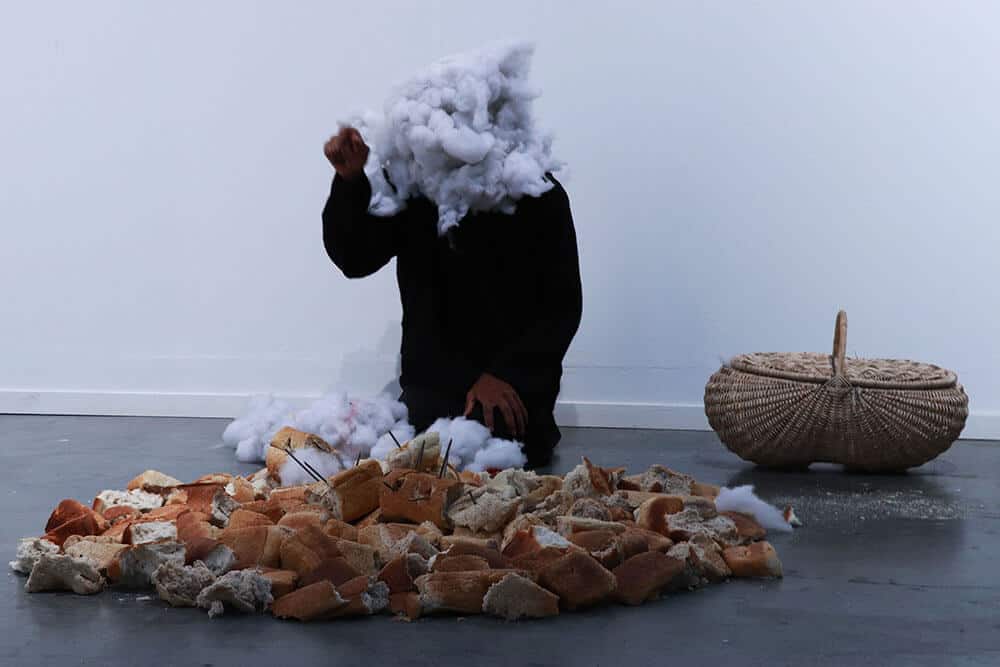 Art(i) depicted the struggles African artists encounter when dealing with the system and the process of creating, developing and performing. It also opened a dialogue on how we can improve art and the value it plays in society. Mgibe describes his performance as, “an experience of personal journey, internal healing and the concept of love,” that people of any demographic can relate to. The artist revealed that according to the feedback he received, most of the audience loved the idea of silent performance anchored by commanding gestures, while others could not understand it. However, curiosity proved to be the main attraction; Mgibe’s face was covered with gauze throughout the performance, which the artist says symbolises the hidden scars we carry. The anonymity allowed the audience to interpret the performance as they saw fit. Mgibe feels that there is a massive disconnect between artists and the public and strives to make his work relatable and welcoming to all, saying, “art is still exclusive, and it is my job to use performance and installation for social change.”

The artists received advice and critical support from Zen Marie, Bettina Malcomess, Lady Skollie, Tracey Rose and Donna Kukama, who were the mentors of the 2019 Award. Uambembe, Sibeko and Mgibe agree that the community that the Bag Factory residency introduced them to was one of the most enriching aspects of the experience. By hosting these young artists and allowing them to interact with their more experienced peers and participate in the larger art network, paired with the exposure provided by FNB Art Joburg, has empowered them. Sibeko described performing at Art Joburg as “a dream come true”, adding, that to ‘play’ on a larger scale he had to heed the advice of the mentors. Uambembe agreed, saying that she saw her performance as an opportunity to stand out and catch the attention of galleries and the broader art community. Wezile Mgibe sums it up best, saying, “It was part of my plan to work with the mentors, but I didn’t have a clear idea of how I would meet them. The residency allowed me to get to know them closely and I am still in communication with the other artists – we always check up on each other – because created a healthy working environment, guided by positive energy.”