Join us in following the daily activities of the Johannesburg Pavilion at the Venice Biennale. This is the daily entry for Day Ten of the 56th Biennale, in which Roelof Petrus van Wyk discusses Thenjiwe Niki Nkosi and Arya Lalloo’s Jetsam, how Africa is ‘so hot right now,’ as well as a photographic installation by Tobias Zielony in the German Pavilion and the increasingly popular work of Sammy Baloji.

Debris on the Beach

It’s been ten days of non-stop Capital Art. And we are wasted on this beautiful sun-washed Sunday. Nice day to get away to the beaches of Lido, an 11 kilometre sandbar, which is also the setting for Thomas Mann’s novel Death in Venice, and the later cinematic interpretation by Visconti. It also has a casino.

Thenjiwe Niki Nkosi and Arya Lalloo together with lensman Chris Wessels, have been shooting Jetsam, a meditation on the broken and bleeding margins, the frayed edges, the dogs scrambling for the crumbs fallen off the edge of the table of the West. This collaborative film and performance project was developed in coupled response to a recent spate of violence against fellow Africans in their home city of Johannesburg, as well as the 41 drowned African migrants floating towards Italy, a week before their own journey to dip their brushes into the honeypot of the Venice Biennale.

‘Jetsam is marine debris that has been thrown overboard to lighten a ship’s load. It is alienated property. It belongs to whoever finds it washed up on shore or floating at sea or sunk to the bottom. The discoverer appropriates it, can sell it, use it or simply make it theirs.’

What is the relationship between culture and currency?

How do we determine cultural value?

What is the value of a ‘black’ artist (at this particular event at least)?

But these questions are quickly disrupted by the real-world #blacklivesmatter disruptions of Joburg, Baltimore and the Mediterranean Sea:

What exactly is a ‘black’ or ‘African’ artist?

Who benefits, mostly financially, from this relationship between African art making and the particular European art apparatus?

Would black artists even matter if there were no ‘African trend’?

Is this curated global extravaganza not just another one-stop-shop for collectors to see everything available all at once, downed and drowned in a few litres of spritz?

And, oh, Africa, is just so hot right now! The cultural wealth of Africa, ready to be plucked, plundered and prized at the best price, even brought to you by the longest list, ever, of artists related to the continent, and the first black director. It’s big news in 2015.

African migratory narratives, if often mythological, are written everywhere. James Stinson’s invented myth, Drexciya, is a black Atlantis on the surface of the Atlantic Ocean, founded by pregnant African women who were thrown overboard slave ships, but whose offspring could breathe underwater. In the painting series of the same title, Ellen Gallagher reconstructs and resurfaces the bones beneath the surface into borderless beings, interdependent and in harmony. 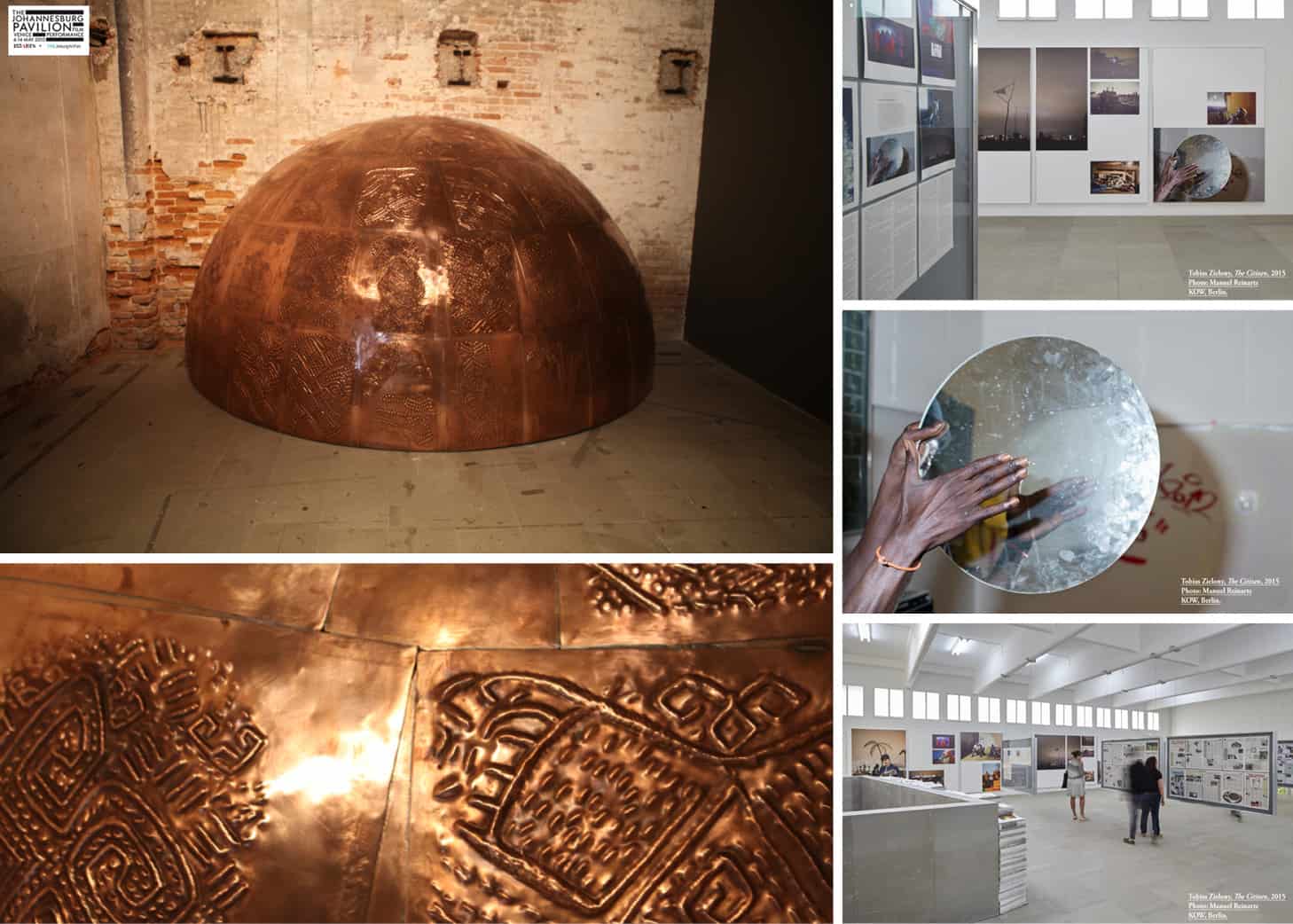 In the German pavilion, which has been turned into a kind of political production facility, called ‘Fabrik,’ Tobias Zielony created a media show on a temporarily constructed piano mobile, where he exhibits photographs he took during time he spent with African refugees in Berlin and Hamburg. These photographs were then published in African newspapers to render visible the conditions of these refugees to African audiences. This strategy, firstly by spreading the art images beyond the gallery spaces, but importantly, circulating the images by retracing the origin-paths of the migrants back to their motherlands – Sudan, Cameroon and Nigeria – comments on the dynamics of capitalism and globalisation, which need continuous motion to profiteer. Of course, white, privileged, male European photographer gazing at, and shooting, black, homeless, refugee, male or female, comes with its very own built-in constructs and dialectical contradictions.

Sammy Baloji, a fast-rising star, features both in the Belgian pavilion and the main show, where he presents work from his archival research, questioning official versions of the Belgian colonial history and exquisite copper bas-relief works of scarification patterns of native groups who resisted forced labour in the copper mines. These works are carto-graphical and anthropological, excavating and narrating Congolese history in a subverted yet, nuanced and complex, way.

Underpinning the strongest work, even though much of it is classically objectified and has a commodity price, is a commitment to the relations and (mis)understandings between markers, makers, places and positions. The Biennale is slowly becoming an Atlas, a collection of sets of overlapping maps, geographic and geo-political of course, often physical and literal, but also poetic, lyrical and imaginative.

And Africa is Present.