Join us in following the daily activities of the Johannesburg Pavilion at the Venice Biennale. In this, the daily entry for Day Four of the 56th Biennale, Roelof Petrus van Wyk discusses drawing – from a chalkboard scrawl by Fabio Mauri and a collection of drawings by Abu Bakarr Mansarry, a former refugee from Sierra Leone, in Okwui Enwezor’s ‘All the World’s Futures’ exhibition, to Senzeni Marasela on her hands and knees on the cobblestones of the Campo San Giacomo dall’Orio, scrawling messages that none of the passersby can understand. 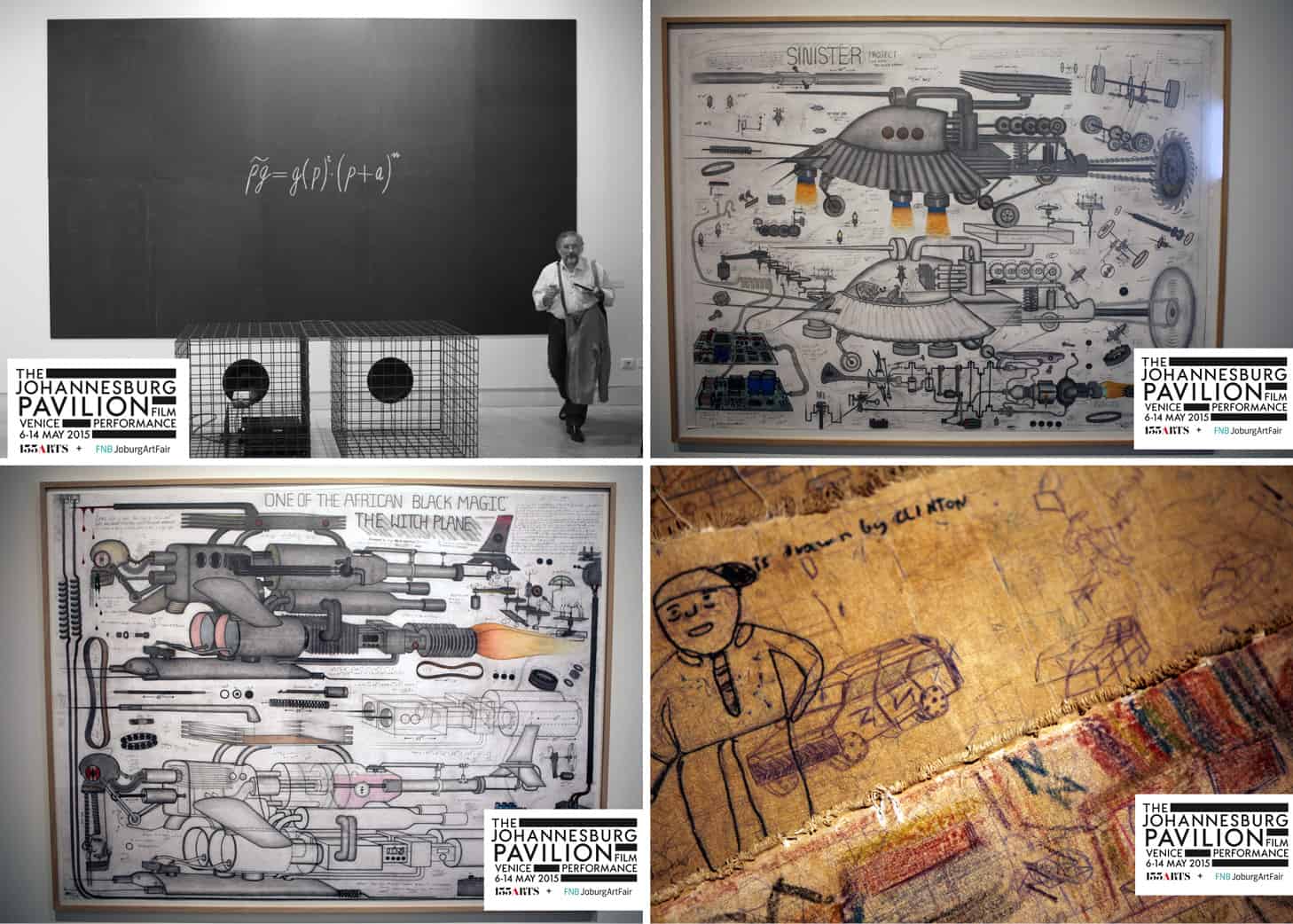 ABOVE: All images courtesy of the Johannesburg Pavilion.

In this exhibition of politics and political persuasions, drawing practice is making its mark alongside the traditional arts of painting and sculpture. Pen and pencil mark-making is already present in the signatures and handwritten numbers on the colophon page of the 1883 edition of Karl Marx’s Das Kapital.

In the Giardini part of Enwezor’s international show, Fabio Mauri writes a simple mathematical equation in chalk on a large wall-mounted blackboard. I numeri malefici (1978) takes us back to the strictures and social structures of the classroom, but is also an attempt by the artist at mapping a territory that is neither governed by accepted aesthetic systems, nor easily monetised and commoditised for the army of collectors considering the drawn equation’s future value.

The Demonstration Drawings of Rirkrit Tiravanija (2015) are a collection of drawings commissioned from Thai artists, translating photojournalistic images of mass uprisings against power and oppression.

Oscar Murillo’s Frequencies (an archive, yet possibilities) (2013- ongoing) continues the strand of drawings made by another person’s hand with canvases temporarily fitted to school children’s desks, registering their inner thoughts through their doodles, scribbles, hearts, stars and even a yin/yang sign. These masses of canvases have been hawk-eyed by an army of young Italian assistants during the Vernissage, since two of the canvases were stolen in a recent New York exhibition. It figures since Murillo is a rising star and the prices of his works have been rocketing. Keep trawling Ebay.

Abu Bakarr Mansarry, a former refugee from Sierra Leone, is showing a collection of drawings made in 1997 – THE MASSAKA (a corruption of ‘Massacre’). These drawings are personal recordings and meditations on the 12-year civil war of his birthplace. Machines and machine guns splutter bullets, blood and fire. Engineered insect constructions crawl through large-scale landscapes of death and demolition, the drawings reflecting less on the industrial-capitalist complex of the 1990s than perhaps on the growing surveillance-security-privacy anxiety present in the personal every day in 2015. 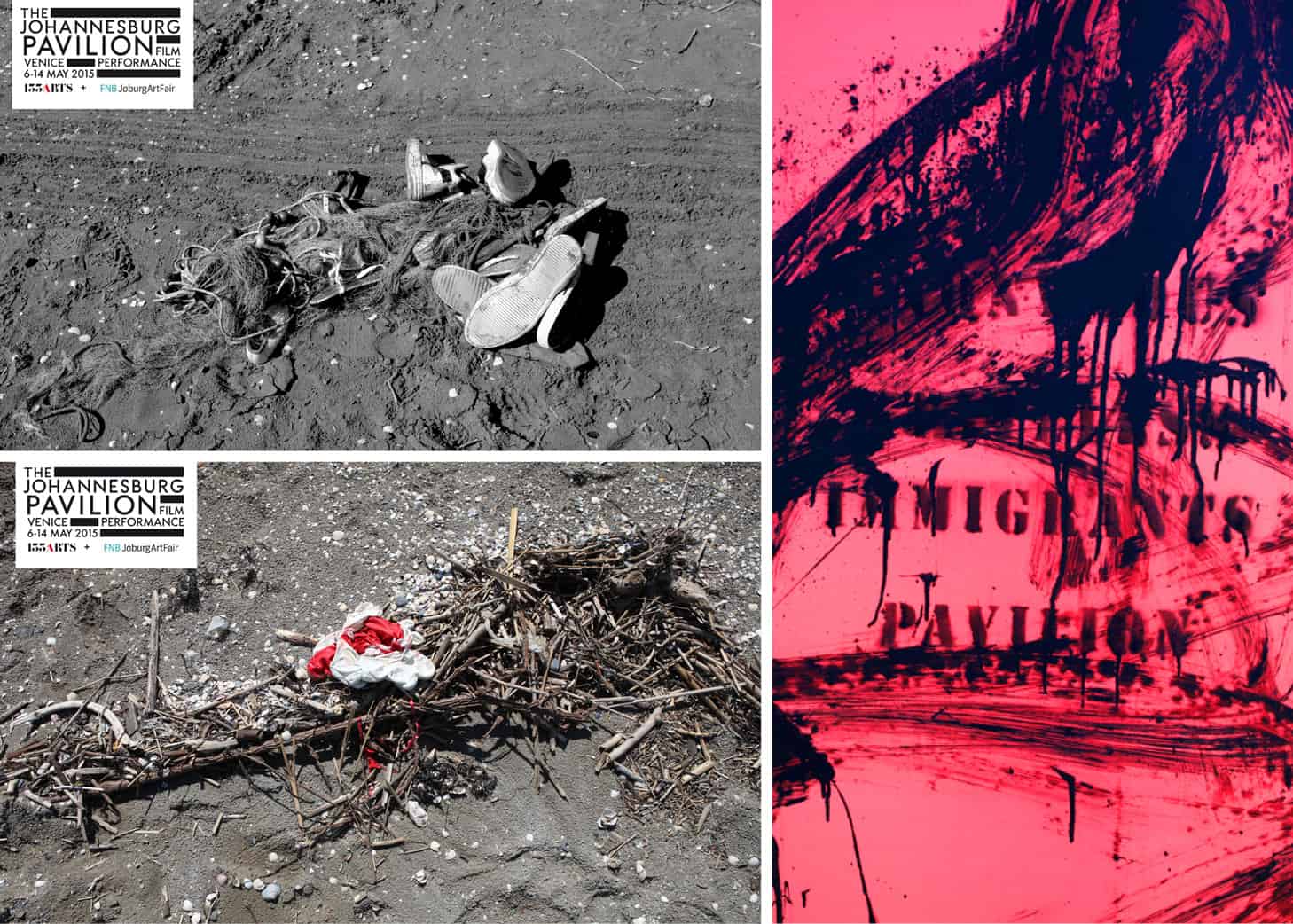 ABOVE: All images courtesy of the Johannesburg Pavilion.

On her knees, dressed in one of the trademark red uniform dresses of the character, Theodora Hlongwane, drawing and marking territory on the flagstones of the public space of the Campo San Giacomo dall’Orio, Senzeni Mthwakazi Marasela navigates and negotiates both curious children and ignorant tourists alike, placing her ‘invisible’ body directly in their path. Someone offered her the address of the local soup kitchen, “Fresh vegetables and dairy for free,” they said. With 60 000 visitors per day, a Stereotype Museum in Venice would have a deep well to fish from.

Between the Mediterranean flotsam and jetsam, creating its own installations and rough stick-drawings on the beach, Thenji Niki Nkosi and Arya Lalloo are making a film meditating on migration. Pulling a fishing net filled with lost shoes from the sea, they leave lines in the sand that lead towards the city, through the Garden of Remembrance in the Giardini, all the way uptown and past the luxury shop front displays containing 5000 Euro crystal-studded Dior pumps.