Join us in following the daily activities of the Johannesburg Pavilion at the Venice Biennale. In this, the daily entry for Day Six of the 56th Biennale, Roelof Petrus van Wyk discusses “the structure of things” – from Napolean Bonaparte laying the foundations (literally) for the Biennale as we know it to “the intertwined game of promotion and profit between the marketer and the potential investor.” 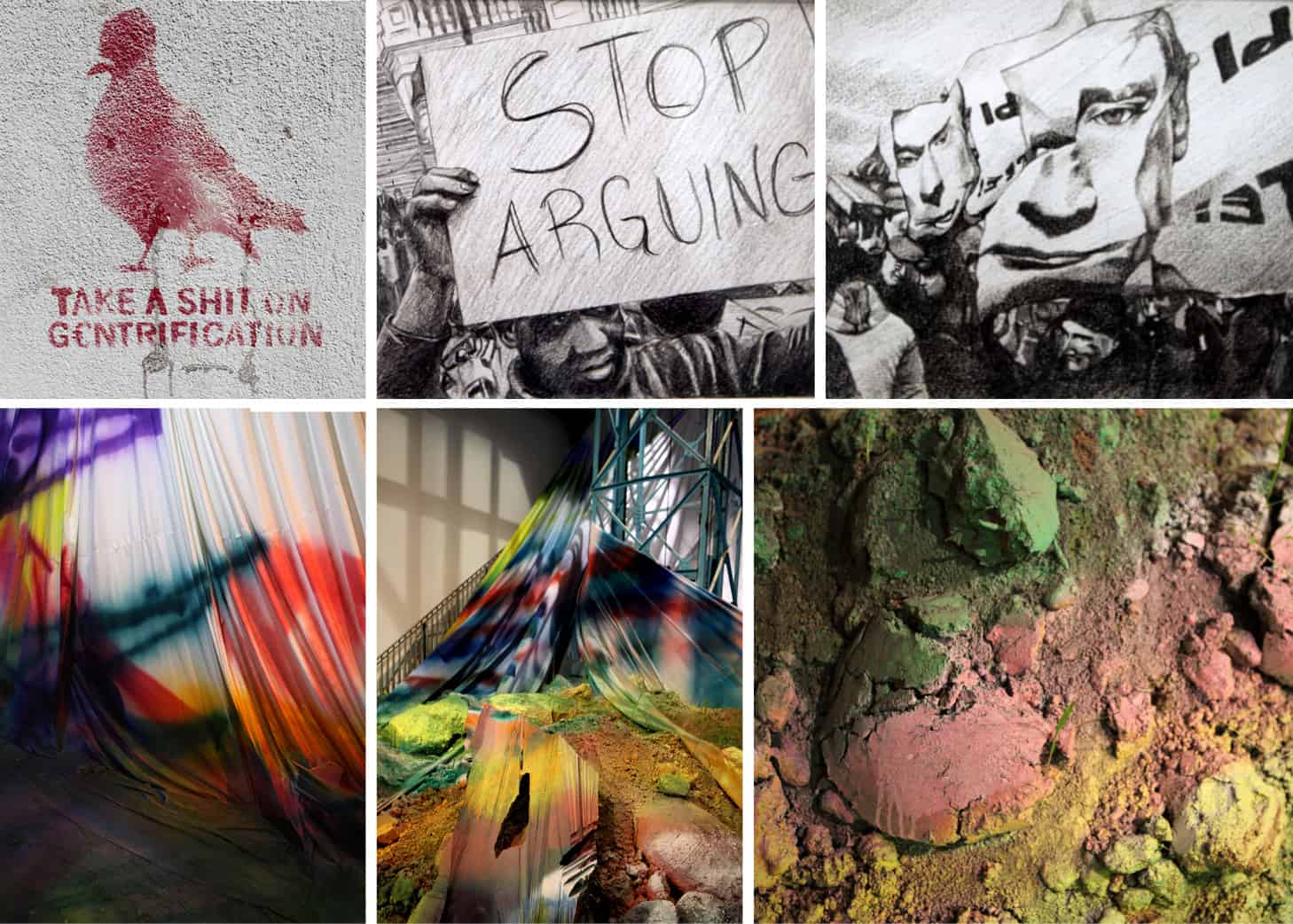 The Structure of Things

Statesman, warmonger and creator of the Napoleonic Code – which forbade privilege by birth andreligious freedom among other liberal reforms – Napoleon Bonaparte was the original director of the hosting urban infrastructure of the Giardini as we know it today, laying down the foundations of the issues underpinning Enwezor’s vision.

“…By expanding the Arsenale, Bonaparte planned to make it into his chief port on the Adriatic Sea. The principle idea was in step with the era of Enlightenment and envisaged increasing the number of public facilities. The city was meant to become not only a functioning organism, but also one that would bear witness to contemporary science and culture of the time. Parks and gardens were necessary features that would represent healthy, green spaces and free lifestyles in touch with nature even if ‘always under the vigilant eye of reason.’” – V. Martini, Muntadas/On Translation: I Giardini, Spanish Pavilion, Actar, Barcelona (2005)

This part of Venice, called Castello, was densely settled and punctuated with convents and some of the oldest churches in the city. Some of these were demolished to make way for Bonaparte’s development, ringing familiar with the contemporary practice of gentrification that profits from the displacement of those who can’t afford to resist or to buy into the calculated promise of a newly acquired abode. The area was “destined for the public” and would reflect in cultural and educational terms, the “modest possibilities of abstract thinking of the working class.”

Nearly a century later, in addressing this ideal, the first ‘International Exhibition of Art’ was inaugurated in a building composed of seventeen pavilions spatially articulated with courtyards arranged around a large central hall. The exhibition was founded to “stimulate a new contemporary art market,” specifically managed through its Sales Office. In this way, Venice was transformed into a modern city with a new international and contemporary art market, which would undoubtedly attract “a new and distinguished type of tourism” (M. M. Lamberti, Le mostre internazionali di Venezia, in I mutamenti del mercato e le ricerche degli artisti, in ‘Storia dell’arte italiana’ (1982)).

Not much is different today even though there hasn’t been a ‘sales office’ since political protests in 1968, with slogans – such as “Biennale of capitalists, we’ll burn your pavilions!” – that would not seem out of place in today’s global citizen’s resistance movements from Cairo to Cape Town to Caracas. Rirkrit Tiravanija’s drawings present some of the little-acknowledged artwork types of the #occupy and similar movements, of this year’s Biennale.

These days, you also won’t find any price lists or wall-mounted price tags next to the meticulously hung artworks, but this cultural and particularly ‘black’ historical moment is an important bolster, especially for young rising ‘startist’s’ careers. The artist’s gallery would punt, praise and rise the artist’s prices accordingly, playing the intertwined game of promotion and profit between the marketer and the potential investor, #likeaboss.

Ploughing your way through the molasses that is the curated International Exhibition in the Arsenale, a feeling of déjà vu transports you momentarily back to Masimiliano Gioni’s 55th Exhibition in 2013, ‘The Encyclopaedic Palace.’ Even a few spooky leftovers from Bice Curiger’s 54th ‘ILLUMInations’ remain in the shadows of the rooms; paint-marks and bolts from those installations are still visible and inscribed on the building’s brick walls and concrete floors, as one remembers Urs Fischer’s melting wax sculpture of a full scale cast of the Rape of the Sabine Women, located in one of the major transitional arches between two of the halls. The closest one gets to this kind of memorable large-scale site-specific work, is the colour-riot-going-berserk of Katarina Grosse, Untitled Trumpet (2015)in its own transitional room. Her wall-to-wall installation is a very physical kind of painting, related closer to the physicality of Pollock (whose Mural (1953) is on show at the Guggenheim in another part of the city) than the works on show of George Baselitz, Chris Ofili or Lorna Simpson, which are all canvas-based dark ruminations in dialogue with the undertow of the ‘All the World’s Futures’ curatorial statement. 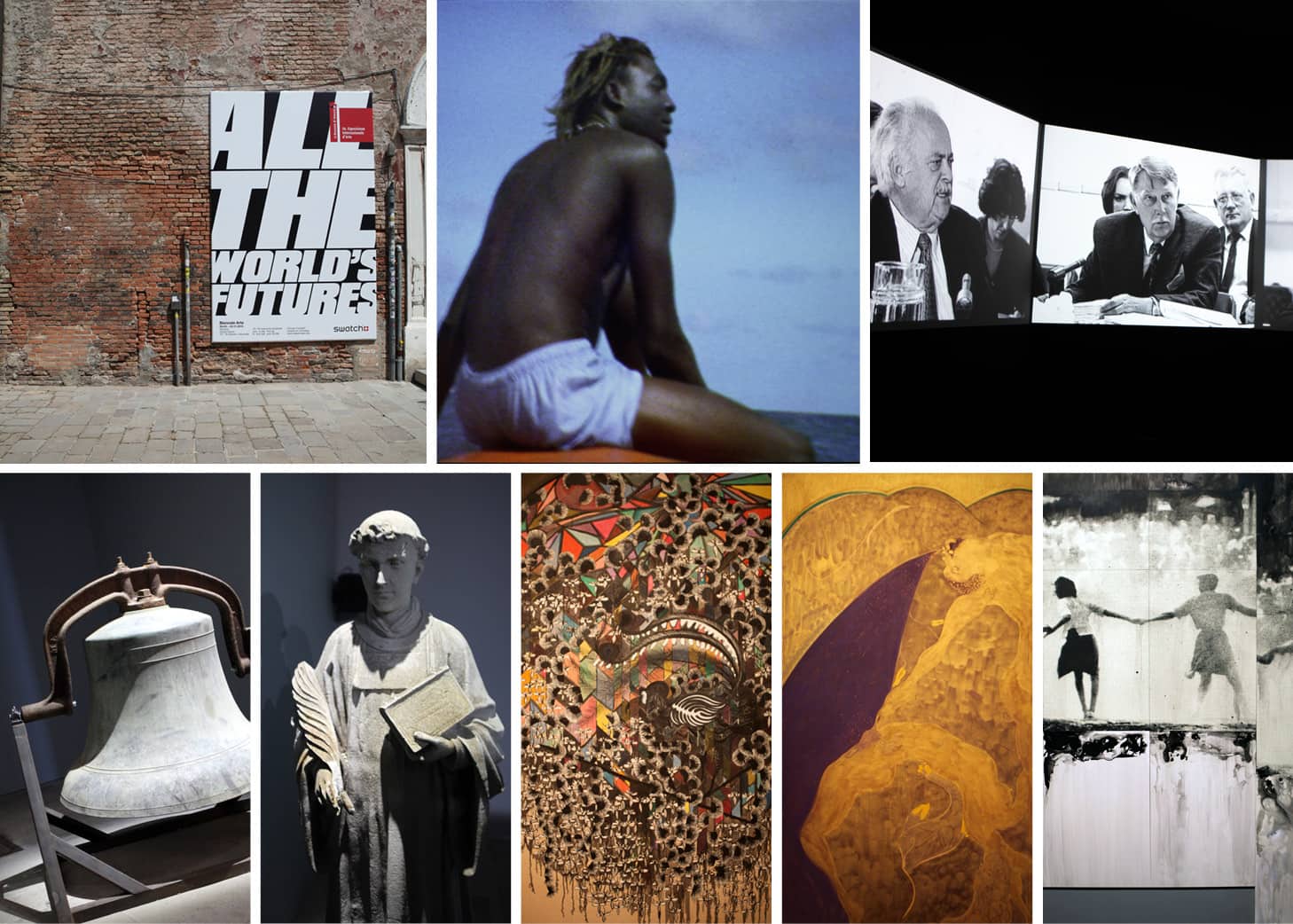 The masses of art tourists slowly flow through the temporary dry-walled video rooms, jostling for a seat to watch Steve McQueen, bridging Hollywood and the art film genre with Ashes (2014-2015). The ghost of 12 Years a Slave hauntingly frames this double screen installation in this historical moment, and allows the viewer to interpret and read between footage of a beautiful young man from Grenada, performing for the lens, that the filmmaker shot in 2002, and the harrowing narrative recounting the same boy’s murder in 2010 after he found a bag of drugs on the beach.

But don’t linger too long – onward and forward, marching off to more stories of inequality, disenfranchisement, displacement of the poor and a healthy dose of war. Please don’t stop suddenly, don’t walk in front of her lens or ask too many questions of the English-third-language assistant lest you prevent the next art expert from displaying his deep knowledge of the particular artist and their practice.

The three-screen film installation of the hearings of the Truth and Reconciliation Commission should have been the only artwork, together with the police footage of the Marikana Massacre, in the South African Pavilion. It raises questions, and challenges the meaning and value of the hearings, specifically for black South Africans today who are more impoverished, more unequal and now also massively indebted by the principles of neo-liberal policies. Apartheid’s infrastructural foundations are intact, reinforced and present in South Africa today.  One could also ask what kind of value the TRC model would have for societies dealing with past injustices like slavery or the holocaust, touching on issues of complicity, guilt, and forgiveness in the confrontation of victim and perpetrator.

Theaster Gates’s practice is located in the intersection between urban planning, religious studies and fine art. His work on display, Gone are the Days of Shelter and Martyr (2014), echoes violent interventions, from Bonaparte’s in Casteletto centuries before to the demolition of the St. Laurence Catholic Church in Chicago’s mostly poor and black South Side area. Gates has installed various artefacts from the church – a bell, the church’s organ and a remnant of the patron saint – surrounding a central large-scale film projection, searching for redemption in the ruins of the building through spiritual song.

We keep walking the same hallowed halls in search of divine inspiration and holy illumination, the handy abbreviated index in hand lest you don’t trust your instincts and have to back up your feelings with some theory to gain insight in the sometimes heavy, other times just heavy-handed, curatorial choices.

If the structure of things stay the same, art can teach us nothing unless we can destabilise those exact power relations that reinforce the unequal delivery of profit under the patronage and pretext of so-called progress.

Napoleon Bonaparte is in the House.