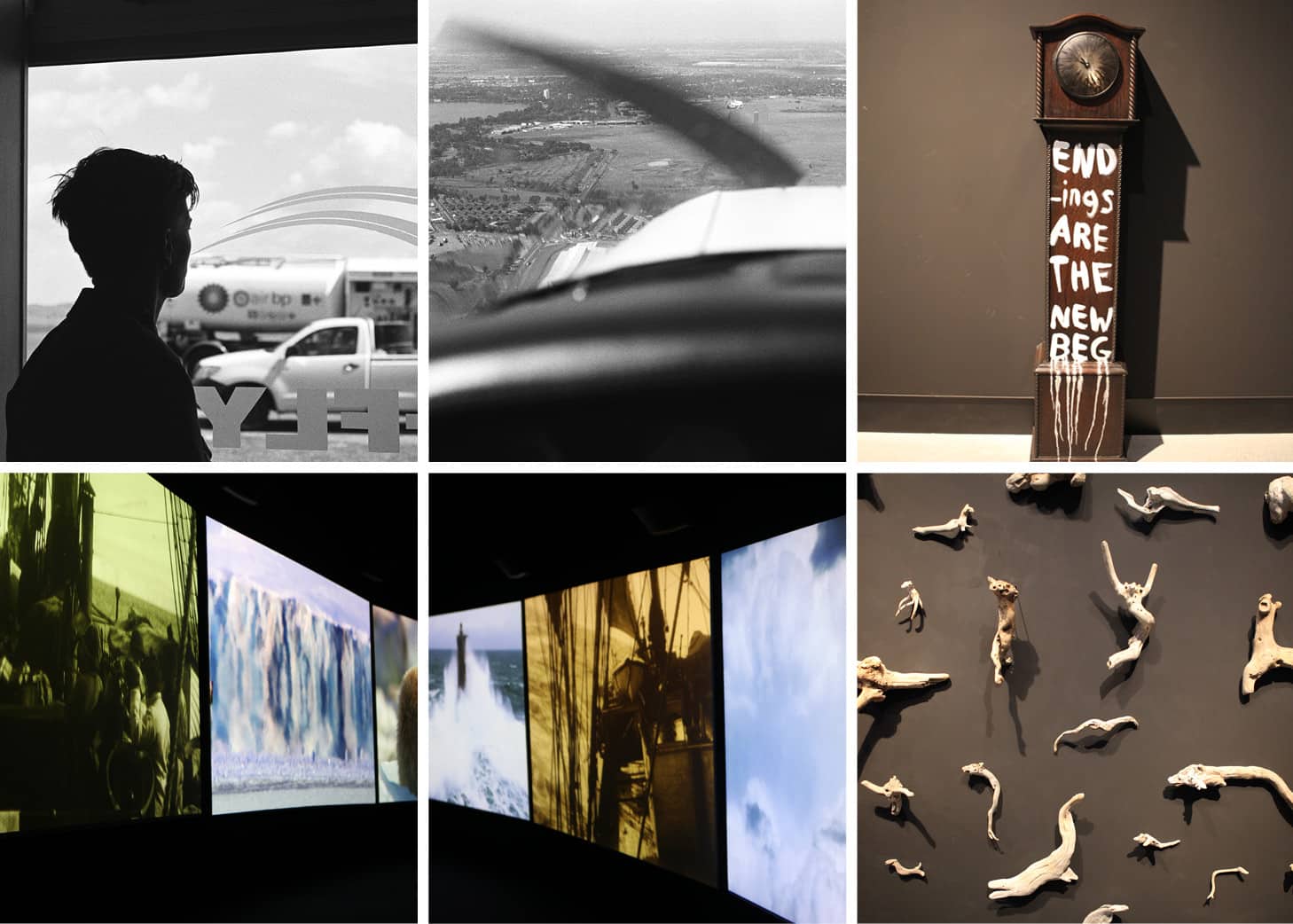 …I dream of a house that is partially flooded. Some of the rooms are almost knee-deep in water. There is a huge fish in one. As the water begins to recede, the fish begins to writhe, struggling for air. I move it with great difficulty from room to room, seeking out any amount of remaining water. The animal is heavy and its movements make my task almost impossible. I awake, remembering the weight of the fish, and the wetness… – from memories of others.

The voice of Bettina Malcomess’ ‘Anne Historical,’ a character who has no memories of her own, narrates the text she types while a local venetian actor responds through affective gestures, and gesticulates on a small makeshift stage. 35mm stills interspersed with text – a photographic sequence from a flight in Johannesburg shortly before coming to Venice – plays out behind the two performers:

An ascent, a landing, an arrival, a departure, a recollection, the description of a scene, the flashback, waiting, scrolling, falling, watching, the reversal.

This is a series of ephemeral performances and installations at different sites working with the first appearances of film as projection in the street, in theatres and in makeshift, mobile ‘cinemas’. This series of ‘moving images’ or ‘appearances’ combines film, voice and gesture to stage different modalities of movement that reflect our imagination of space, time and memory. This piece begins from archival footage of the ‘Great African Air Race’ from the United Kingdom to Johannesburg during the British Empire Exhibition. The race was a failure, with only one plane actually making it to Johannesburg and three fatal accidents en route. The race imagines the African continent as a single territory over which an essentially abstract, colonial movement takes place across a map: from Portsmouth to Cairo to Khartoum to Johannesburg.

Water fills the film installation of John Akomfrah, positioned somewhere between fiction and non-fiction, traditional cinema and the art gallery, DIY punk ethics and sleek production aesthetics, beautifully explored in a three-screen film installation in the Giardini della Biennale. Vertigo Sea is a meditation on whaling, the environment and the engulfing body of water of the world’s oceans. The installation is created from archival and unpublished material in the form of a documentary essay, verging on a David Attenborough-directed National Geographic Special. However, this immersive work transforms the cinema room into an underwater hideout with windows washed over by crashing waves, interspersed with the slaughter of baby polar bears, jellyfish slowly rising up to the surface light where the sublime sun awaits, shortly before a slave driver pushes a tired slave into the sea. Black bodies washed out on the beach punctuate and briefly pause the momentum of the film to remind us of the 41 African migrants who drowned while crossing the sea to Italy a week or two earlier. This is the end of humanity as we know it, in a world in severe crisis, and we feel just fine.

In the Australian pavilion, the clocks are ticking as Fiona Hall “examines environmental degradation, capitalism, politics, among other critical topics, and links them together in a menagerie of 1000 sculptural works that evoke humanity’s deep-seated concern over the state of contemporary life,” in an immersive installation titled Wrong Way Time. Global conflict, global finances and the environment live in some kind of artistic harmony next to each other in this newly built black-Zimbabwean-granite-covered box; guns baked out of bread, banknotes transformed into watercolours, bird nests woven from strips of currency and human-like figures knitted from shredded military uniforms float sadly in the centre of the room. Hall’s wunderkammer or cabinet-of-curiosities-inspired installation also includes a map of the southern Mediterranean, covered in figures representing the same drowned migrants recalled in Akomfrah’s film.

The countdown to the global meltdown continues – un-abating, unabashed and uncontrolled.