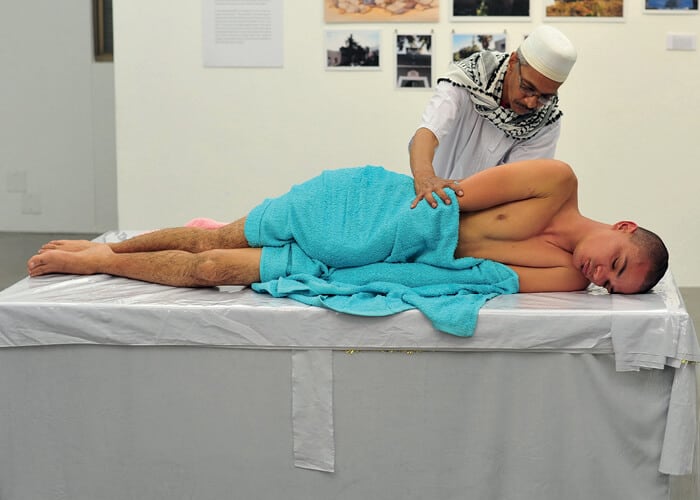 Igshaan Adams, Please Remember II, 2013. Performance by the artist and his father, whereby Adams’ body is washed and wrapped by his father in the traditional Islamic process of preparing the dead for burial Documentation of performance at ‘Three Abdullahs: A Geneaology of Resistance’, curated by Justin Davy at the Centre for African Studies, Cape Town.
After spending some valuable time in Igshaan Adams’ studio, it becomes very apparent the vital role that fabric as a medium plays in his artistic dialogues. Some of Adams’ earliest childhood memories include going to work with his mother on a Saturday. His mother was a machinist − constantly crafting a range of textiles − and this environment started to cultivate Adams’ passion for material and tactile mediums.

Adams’ use of textiles exemplifies the strong feminine influence during his formative years, when the matriarchs in his family had a significant impact on him. It echoes the domestic environment, a prevalent theme in Adams’ oeuvre, as well as raising issues of sexuality and the questioning of stereotypes. Through dialogue with fabric, Adams questions his divergent personal identity, being a coloured, gay, Muslim man who grew up in a traditionally Christian home. Adams’ use of fabric challenges the typical notion that textiles are solely a feminine occupation.

One of Adams’ most powerful interventions was a performance piece, titled Bismillah (Be in the name of God), where Adams’ father prepared his body for burial in Islamic tradition − washing his body and then proceeding to wrap it in a Janazah (funeral) cloth. The ritual enactment of Adams’ burial whilst still alive had strong links to the artist’s relationship with a close aunt. For many years, Adams’ idolised her. Over the years, life had dealt her severe blows and Adams felt almost as if she no longer existed; mourning her even though she was still alive. Despite these notions of mourning, Adams found this experience particularly gratifying and cleansing, the performance also strengthening the relationship with his father; he felt pure and holy afterwards. Adams had previously enacted this performance, then titled 3 Abdullahs, at the Centre for African Studies at the University of Cape Town. In 2014, Adams’ reenacted Bismillah for the second time at the 1820 Settler’s Monument in Grahamstown. This context greatly influenced the performance − deep in the basement of the Monument surrounded by creaking water pipes and heavily textured rubble and stone, the pervasive smell of fecund ground and suffocating cement − playing into the notion of being in a burial ground. 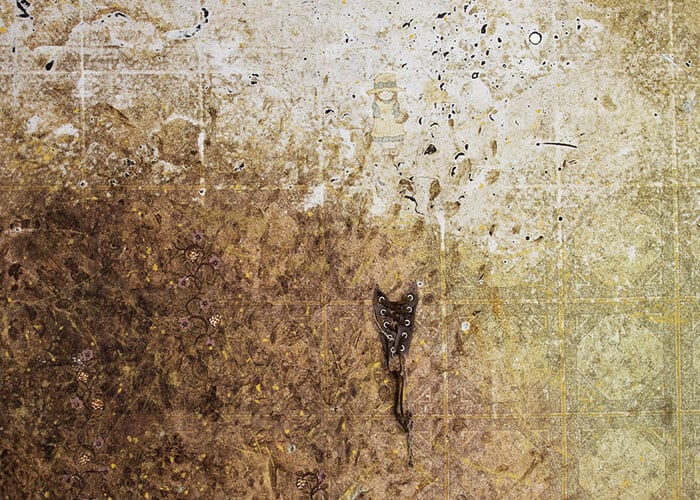 Adams’ inquiries into domesticity, community and identity continued in his ‘Vinyl’ series, shown at the AVA Gallery in 2010. In this instance, he reconstituted vinyl floor tiles from homes in Bonteheuwel, a Cape Town community well-known to the artist. The materiality of this flooring intrigued him, and as he investigated the tiles he realised that they told a unique and very personal story. One of the works, Boeta Joe se voerdeur tapyt (Brother Joe’s front door floor), came from the house of Joe, a Xhosa man who had moved into the neighbourhood. Adams was intrigued by the layers of vinyl that accumulated over the decades as Joe continually patched over previous sections. Each layer was a canvas for a time in this man’s life. By working into this vinyl flooring, adding his own layers of paint and fabric, Adams creates a dialogue with the narrative presented − the tactility and investigation of material making these pieces powerful and resilient.

Hennie se Kamer Tapyt (Hennie’s room floor)tells an even more humane story, of Hennie’s struggle with illness and, even more so, the unyielding love and devotion of Hennie’s wife who cared for him through his sickness. The fragmentation of vinyl flooring symbolises Adams’ own interest in his hybrid identity and, by reworking these surfaces, Adams constructs his own interpretation of the story, a response to the narrative depicted before him.

Currently, Adams is working into a series of material mediums using Herman Rorschach’s ink plates as templates, having been recently introduced to them during a residency in Switzerland. In recent years, the Rorschach ink blots have fallen out of favour, but Adams is intrigued by the history and reasoning behind them. He will engage with them in his own unique way, enabling the medium to unravel his questioning and thought processes. The rest of us will wait with baited breath to see what arises.

Daniel Hewson is a curator, educator, artist and writer based in Cape Town.