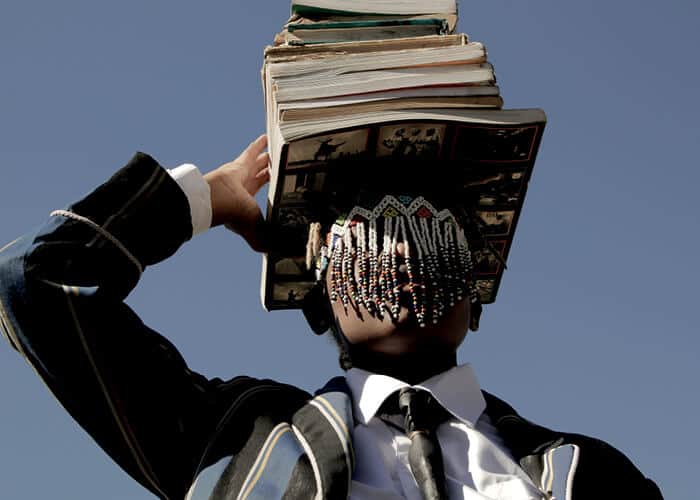 Since Heritage Day 2013, Msezane has been conducting performances on most South African public holidays. Msezane’s performances relate to the historic context of that particular day. Msezane brings dialogue through art out into the public arena, enabling people to literally stumble upon her.

Youth Day 2014 proved to be a vital event in Msezane’s series of performances as it echoed the shift in awareness within the youth of South Africa in the times we live in today. She decided to perform at Walter Sisulu Square in Kliptown, Soweto. Whilst Youth Day is remembered for the Soweto student uprisings in 1976, Walter Sisulu Square is the site where the Freedom Charter came into being, which to this day remains a pillar in our sacred democracy. Through performing on this site, Msezane commemorates the ideals that the Youth of 1976 fought for that are present in the Freedom Charter of 1955. Msezane stands on her plinth wearing her highschool blazer balancing a number of weighty books on her head. Such an image provokes the ongoing and unresolved educational issues affecting South Africa. It also implies the pressure on the youth to learn at a rapid rate and our government’s pressure to educate and equip the next generations.

To date Msezane’s most memorable performance occurred on Women’s Day this year. It was in honour of important women both past and present in the guise of her great grandmother, Gog’ MaShange who was a very present figure in her early childhood years. Gog’ MaShange’s checkered blanket is central to this performance. For Msezane the blanket also alludes to how checkered South African society still is. Msezane performed bare breasted thus reasserting her womanhood and questioning the way women are too often confined into tight boundaries within society. 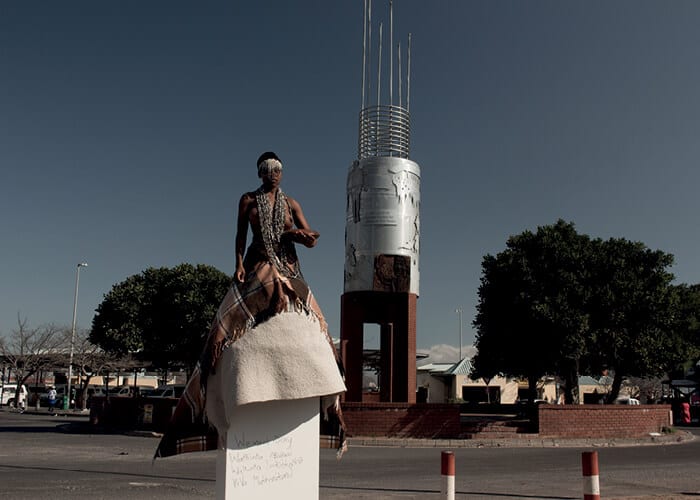 The location of this performance was Freedom Square in Langa near a large taxi rank. This setting has a history of women rising up against apartheid but it also questions violence against woman in taxi ranks as in the case of Noord taxi rank in Johannesburg in 2012. Two teenage girls were judged to be inappropriately dressed and as a result were sexually harassed by approximately 60 men.

It also reminded me of the important role played by South African photographer, Zanele Muholi, whose continued work honours the bodies of women in same sex relationships. Both Msezane and Muholi attempt to “redefine the stereotypes associated with gender and sexuality”[1]. One woman whole heartedly engaged with Msezane by singing and dancing, in effect becoming part of the performance. During Msezane’s performance she exclaimed, “Wathintabafazi Wathintimbokodo” translating as the historic slogan, “You have a struck a woman, you have stuck a rock!” This interaction was very rewarding for Msezane as she could see the impact her performance had on the woman and the audience.

This bright young artist has plans to continue her performances and is definitely working towards a performance to be conducted on Reconciliation Day in December 2014. It is vital for South Africans to realise the brilliant role that Msezane is playing in South African society. She is asking the public to question and reflect on significant days in our history and as a result is activating these public holidays as spaces for sincere consideration.