The Most Beautiful Object in South Africa: Design Indaba Announces the 2015 Nominees

The Most Beautiful Object in South Africa (MBOISA) is an annual competition and exhibition presented at the Design Indaba Expo. A panel of experts – including acclaimed photographer Zanele Muholi and Mike van Graan from the African Arts Institute – were asked to nominate what they deem to be the most beautiful object in the country. 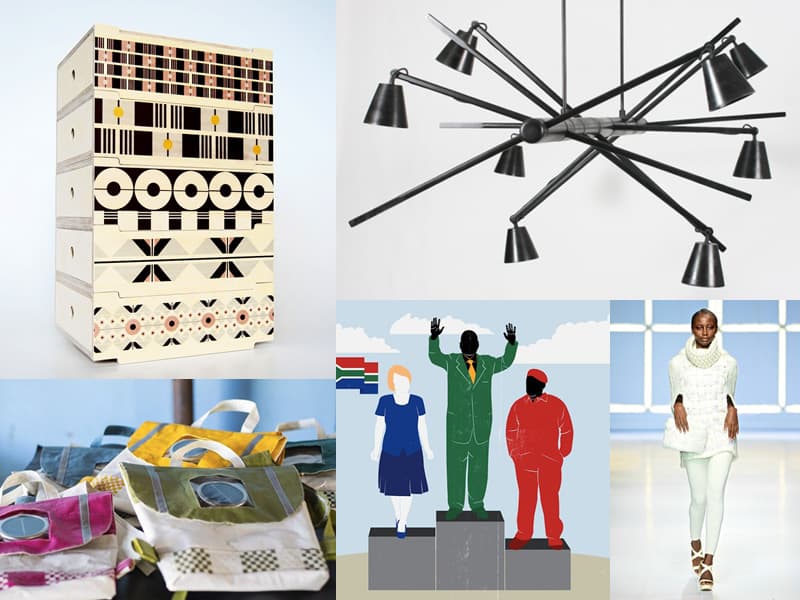 The twelve MBOISA nominees will be exhibited at the Design Indaba Expo, which takes place from 27 February to 1 March at the Cape Town International Convention Centre. The results are always an interesting barometer of the local creative industries and are usually widely varied – architectural design, school bags and even a TV decoder make it onto 2015’s list.

The public gets to decide which object is the overall winner with voting commencing online and culminating on the MBOISA stand at Design Indaba Expo.

Have a look at the 12 nominees and choose your favourite for the 2015 MBOISA! 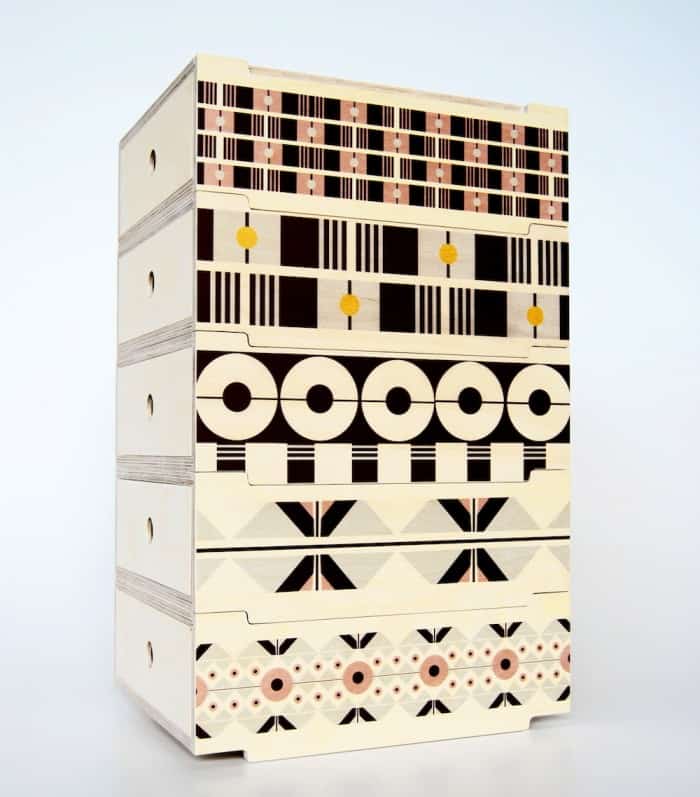 By De Steyl + Renée Rossouw StudioFurniture design studio De Steyl collaborated with architect and designer Renée Rossouw on a range of modular storage pieces, called Play Play Pattern. This storage piece takes the range’s pairing of birch plywood furniture and Rossouw’s graphic patterns one step further. The stackable storage boxes come with drawers for the home/office/studio and can be used on a desktop or as freestanding furniture. The 2DO towers can be stacked as high as the users want, creating a multitude of patterns. 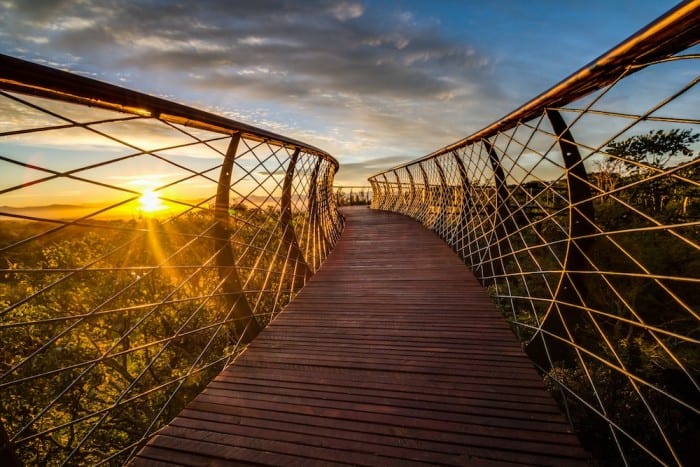 By Mark Thomas Architects and Henry Fagan & PartnersCompleted in 2014 to celebrate Kirstenbosch National Botanical Garden’s 100th birthday, the curved steel and timber walkway winds and dips its way through and over the trees of the arboretum. Inspired by a snake skeleton and nicknamed “The Boomslang”, it is a low-maintenance and low-impact design. The main spine of the walkway is tubular steel, with welded ribs and a light mesh giving the cross bracing, allowing the whole form to act as a bridge-spanning beam. The slatted pine decking is placed on edge and spaced to accommodate the walkway’s curves. 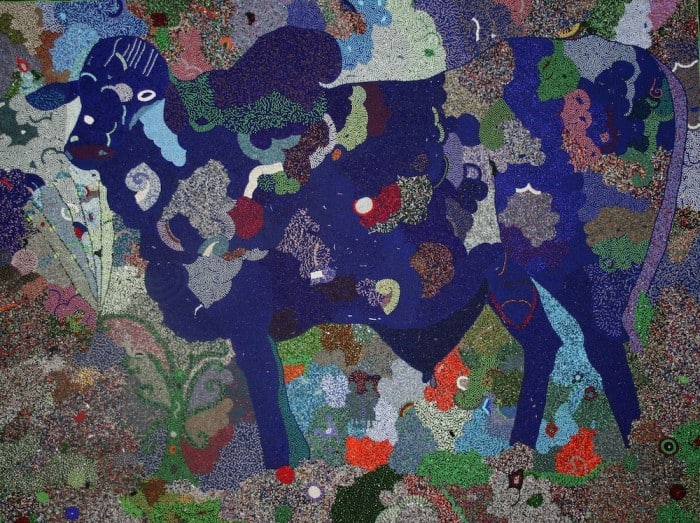 By Ntombephi Ntobela, Ubuhle Beautiful BeadsNtobela says this about her beaded artwork: “Under our skins we are all blue because we are all made of water. We exist because of water, it is the connection between all that lives. It is what connects us to the spiritual world.” Over the course of a year, she meticulously sewed each bead on to create this piece, which was inspired by an encounter with a Boran bull on a farm in Winterton. She is a master beader, who grew up in a traditional Xhosa home and never had any formal schooling. She cannot read or write. Here she tells her story in a way that transcends language barriers as well as literacy.

Nominated by Zanele Muholi, photographer: “Beading from her soul she shares the wisdom of her philosophy as well as her story with us. Beading also acts as therapy as she is able to communicate her feelings through her beading.” 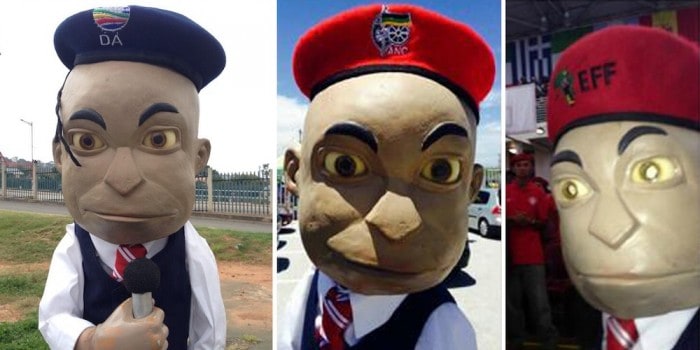 By the EFF, ANC and DAAfter members of the EFF donned red berets, the ANC got in on the action ahead of the 2014 elections. It began distributing red berets emblazoned with its own party logo. Julius Malema cried foul, and so began “the battle of the red berets”.

Nominated by Chester Missing, South Africa’s puppet political analyst: “I support the way people mobilise design to their own political ends. The manner in which the colour and use of one’s hat leverages a street politics that attempts to create credibility about who has legitimate claim to represent the people’s interests. And then the way in which people themselves make claims using the berets against each other. These are legitimate claims made by ordinary rank and file over who and what political stance holds credibility as a solution for South Africa, by invoking a worldwide symbol of revolution.” 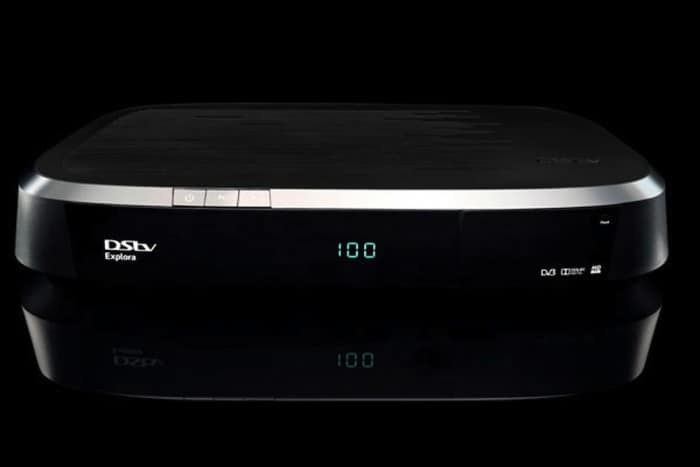 By MultiChoice, manufactured by PaceThe Explora, DStv’s next-generation PVR decoder, is manufactured and assembled locally. The decoder previously came into the country as a semi-knocked down unit to be put together by Vektronix, which was contracted by Pace to build the boxes. Having a manufacturing facility in South Africa now enables Pace to supply set top boxes to operators in Southern Africa, cutting down on costs and lead times and creating local jobs.

Nominated by Toby Shapshak, editor and publisher of Stuff magazine: “While the Explora satellite decoder is nothing too exciting in terms of physical design, the software is a leap ahead. World-class. And there are more impressive things to come still.” 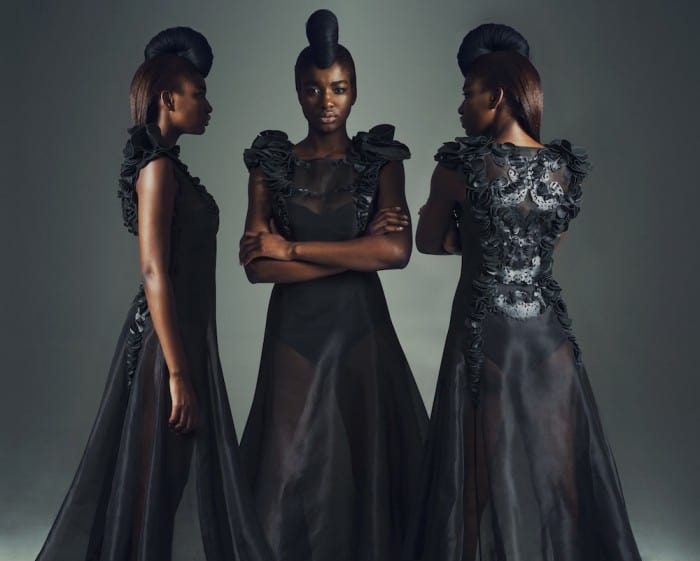 By ERREThis dress was the final look of the ERRE Spring/Summer 2014 show at South African Fashion Week. Inspired by the offcuts from the brand’s leather jackets, the dress combines technology with hand-crafted techniques. The back features laser-cut leather and the rest of the dress is made up hundreds of leather circles in various sizes hand-stitched into a floral-like motif.

Nominated by Lucilla Booyzen, director of South African Fashion Week: “The workmanship on this unique hand-sewn luxury garment is excellent. Created using a unique combination of modern technology with traditional craftsmanship, it is a fresh approach to a chic new princess dress that can be worn anytime to anywhere. You can wear it with jeans, elegant pants, with a swimsuit underneath or with high heels as a ball gown.” (Photo: Bevan Davis) 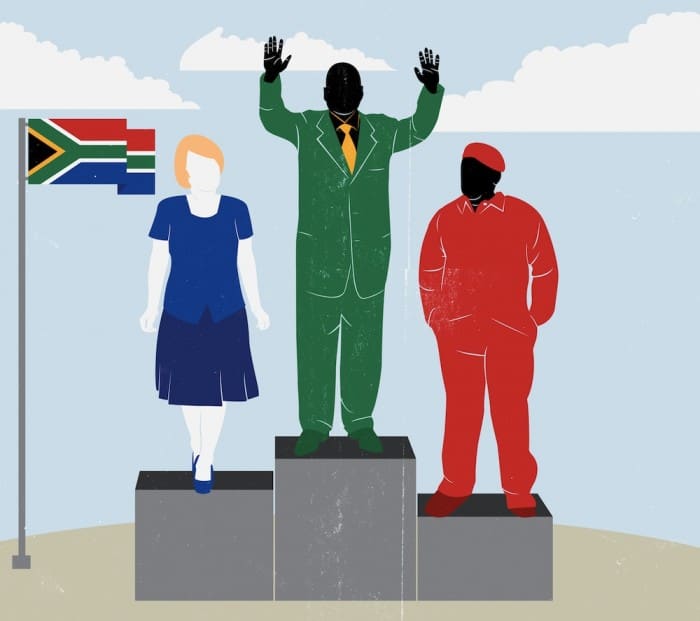 By Thandiwe TshabalalaIllustrator Thandiwe Tshabalala created this colourful artwork after studying the South African flag during the 2014 general elections and spotting an interesting link. She was inspired by the way in which the election results seemed to fulfil the prophecy laid out on the flag. Tshabalala explains that it is not a celebration of any one political party, but rather an observation about the relationship between the design of the flag and the election outcome.

Nominated by Xolisa Dyeshana, executive creative director and partner of Joe Public and outgoing chairman of the Loerie Awards: “I chose this piece not only because of its aesthetic appeal, but also because of how it uses art and creativity to make bold commentary of our political situation today.” 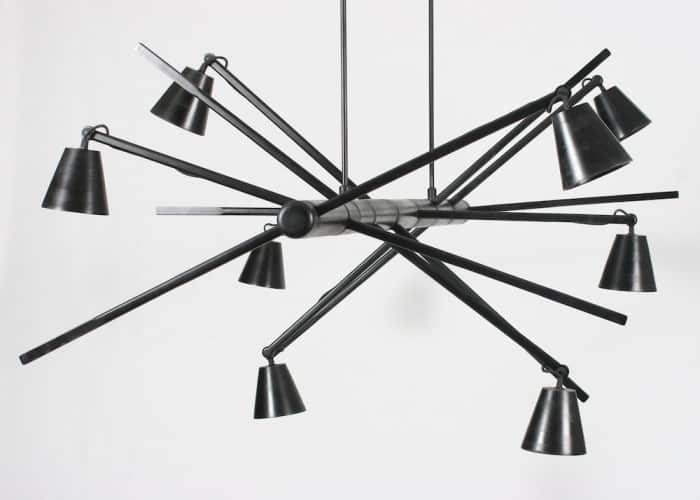 By David KrynauwThe chandelier is handmade from solid timber, with each arm swivelling 360 degrees independently to achieve various configurations. It was featured on the April 2014 cover of Wallpaper* magazine and has sold successfully at some of the world’s top collectable design fairs.

Nominated by Masego “Maps” Maponyane, TV presenter, actor, creative consultant and entrepreneur: “The piece’s function is a great metaphor for one’s life. When the lights are lined up, they form a straight line; however, the excitement comes in when they are haphazardly arranged to illuminate more in the space – thus illustrating just how ‘haywire’ city life can get yet how effective that can be, as it’s become the order of the day and the reason behind the light’s success. For me its craftsmanship, ingenuity, sustainability and meaning make it beautiful.” 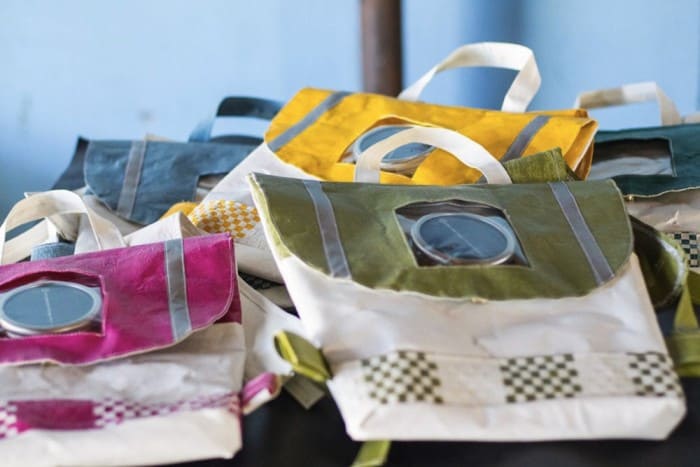 By RethakaMade from recycled plastic shopping bags, the design is nifty, eco-friendly and durable. Retro-reflective material increases visibility and therefore safety from motorists, and its naturally waterproof material keeps schoolbooks from getting wet. The added solar panel is a renewable light source that charges during the child’s walk to school and transforms into a solar lantern to study for up to 12 hours. The signature mesh band is made of textile offcuts.

Nominated by Design Indaba Expo Team: “Repurpose Schoolbags shines a light on the need to enable the next generation of innovators to make the most of their education but also educates the young users to be resource-savvy, environmentally responsible citizens. These social entrepreneurs illustrates the growing prominence of design that really does #makechange.”(Photo: Miora Rajaonary) 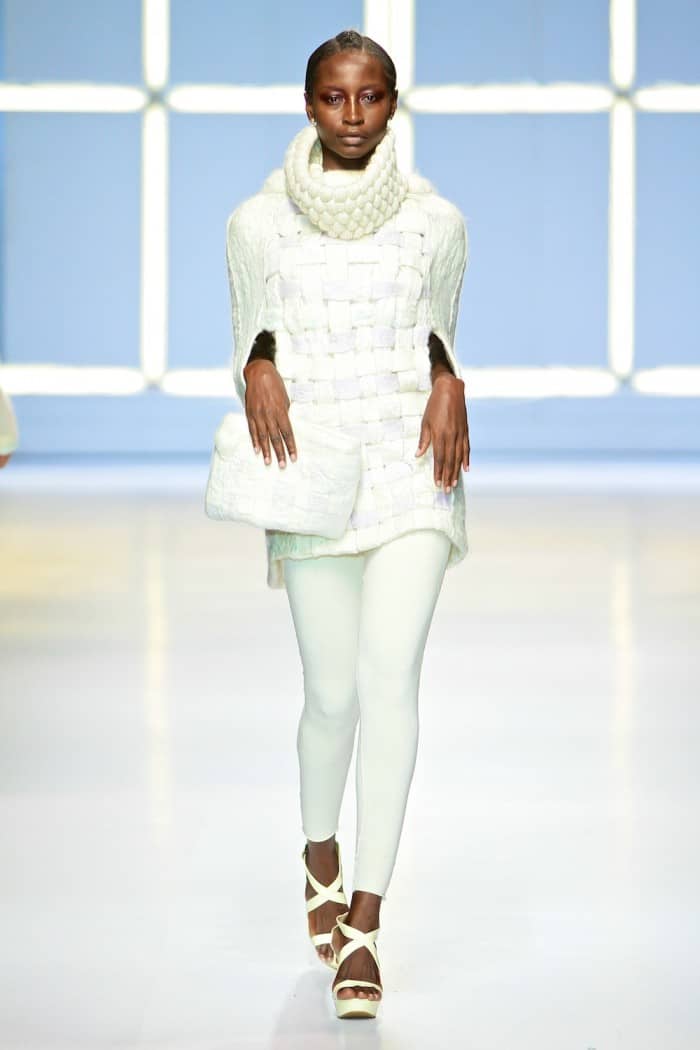 By Milk: Mohair She FeltRuth McNaughton, the designer behind the Milk label, designed this cape to demonstrate the beauty and purity of using all natural and local resources in a truly sustainable way. Creating traditional felt uses less resources than the production of any other textile. Only water and soap are used, assisted by hand movements that agitate the fibres into a matted fabric. Inspired by the nomadic use of felt for protection, the cape encapsulates the body.

Nominated by Nonhle Thema, actress, presenter and businesswoman: “I was drawn to the design of this warm felted cape. The combination of various textures and techniques combined with the subtle layering of light colours makes this my choice as Most Beautiful Object.” (Photo by Simon Deiner). 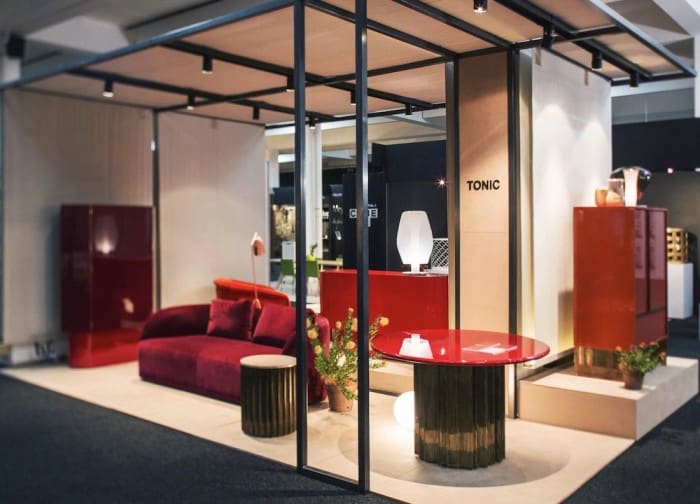 Nominated by Tiaan Nagel, editor of Sunday Times Fashion Weekly: “I’m obsessed with the gentle geometry of this beautiful cabinet in a deep rich lacquered red. It reminds me of the red flick of Andrée Putman’s lipstick, always beautiful and utterly sophisticated but still a little irreverent. In true Tonic style, the warm wooden interior of the Kitale cabinet is a refreshing surprise.” 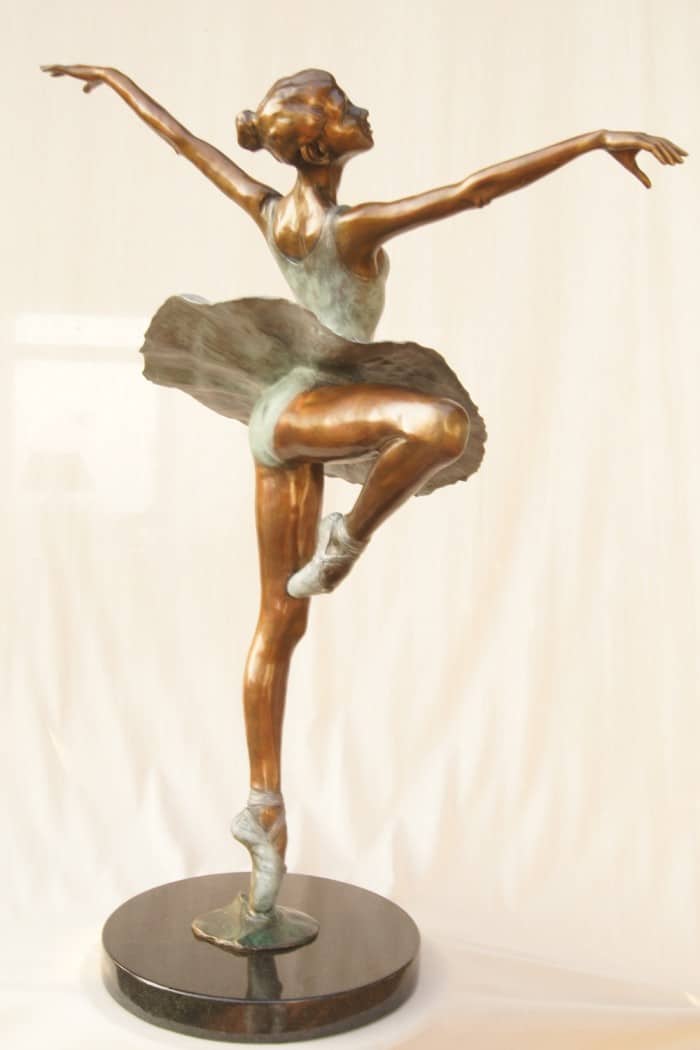 By Llewellyn DaviesLlewellyn Davies began sculpting as a four-year-old farm boy in Zimbabwe. Growing up in the Matabeleland bushveld stimulated a lifelong love affair with sculpture. After initially pursuing a farming career, he gave up farming and turned full time to sculpture. He is adept at portraying animals and people in motion.

Nominated by Lalla Hirayama, dancer, actress and TV presenter: “I chose this piece as it resonates with me, an old ballet dancer. It captures a simple but powerful moment so well.  Just by using bronze, artist Llewellyn Davies was able to create this magnificent ballerina in motion. With an air of innocence and a slightly unrefined style, she stands en pointe in all her glory.”

Go to the Design Indaba page to cast your votes!