Classed by the United Nations as the 28th happiest city in the world, Dubai – true to character – has set its sight on being within the top three happiest cities, if not first place, by 2021.

Set with the challenge of achieving happiness in the United Arab Emirates (UAE), is Minister of State for Happiness, Her Excellency Ohoud Al Roumi. One of the first countries in the world to dedicate a Minister specifically to the task of bringing happiness to all its citizens, the main conditions for achieving this have been identified – by the Global Happiness Policy Report 2018 – as depending on “economic prosperity, including decent work for all those who want it; the physical and mental health of citizens; freedom of individuals to make key life decisions; strong and vibrant social support networks (social capital); shared public values of generosity; and social trust, including confidence in the honesty of business and government”.

In an attempt to achieve this utmost happiness, Dubai has decided to line their public transport – buses, taxi cabs and the metro – with large, smiling emoticons, all declaring that ‘happiness is around every corner’. Accompanying this declaration is the hashtag, ‘WeMoveHappy’. It is an absurd sight – vehicles manic with glee, promising to take their passengers to Destination Happiness, the dream of eternal contentment very much achievable. 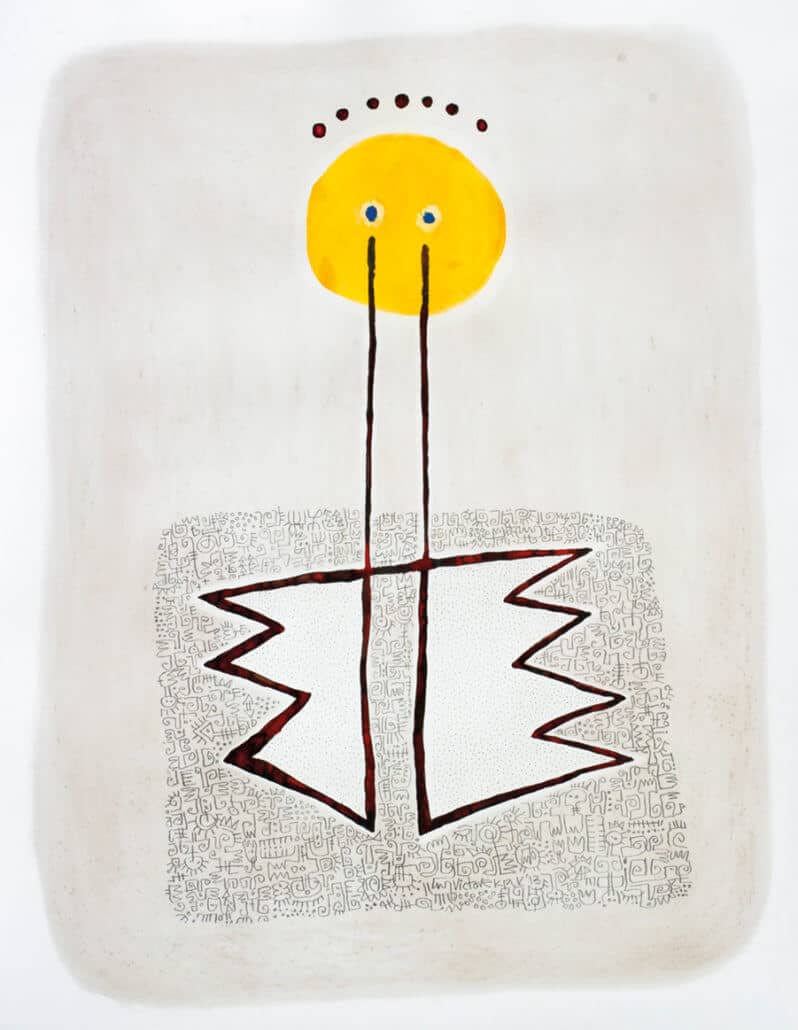 Victor Ekpuk, Gaurdian of the Pueblos (Santa Fe Suite), 2013. Graphite and pastel on paper, 127 x 96cm. Courtesy of the artist and TAFETA.

This spectacle has even infected the government buildings of Dubai. Plastered above the entrance of Police Departments across the city are enormous, yellow smiley faces. It is an intriguing expression of happiness, and one that may easily be mistaken for a very big, insincere ‘fuck you’. Everyone, I’m sure, is familiar with the misery of bureaucracy.

While the intention for happiness is there, these smiling faces don’t exactly encapsulate the conditions set out by the Global Happiness Policy Report. If anything, they may be considered as an insult to the mental health of citizens. What we forget, and perhaps what Dubai relies on us forgetting, is that happiness is much more than pleasure without pain. At once, the campaign reduces our understanding of happiness – and all that we hope for it to be – to a comical pictorial representation of a facial expression, and affirms that technologies have been put in place to analyse, track and manipulate our subjective states of mind.

It also seems that Dubai has been somewhat selective about who may be entitled to happiness within the city. Considering the World Report 2018 compiled by Human Rights Watch, foreign nationals – who account for more than 88.5 percent of the UAE’s population, according to 2011 government statistics – remain “acutely vulnerable to forced labour, despite some reforms”, and “domestic workers, who face a range of abuses, from unpaid wages, confinement to the house, workdays up to 21 hours with no breaks, to physical or sexual assault by employers” remain excluded from the UAE’s labour laws. Discrimination on the basis of sex and gender is also not included in the definition of discrimination in the UAE’s 2015 anti-discrimination law. Arguably, these laws do not reflect a number of the conditions highlighted by the Global Happiness Policy Report, and places doubt on Dubai’s dreams of becoming the happiest city in the world by 2021. 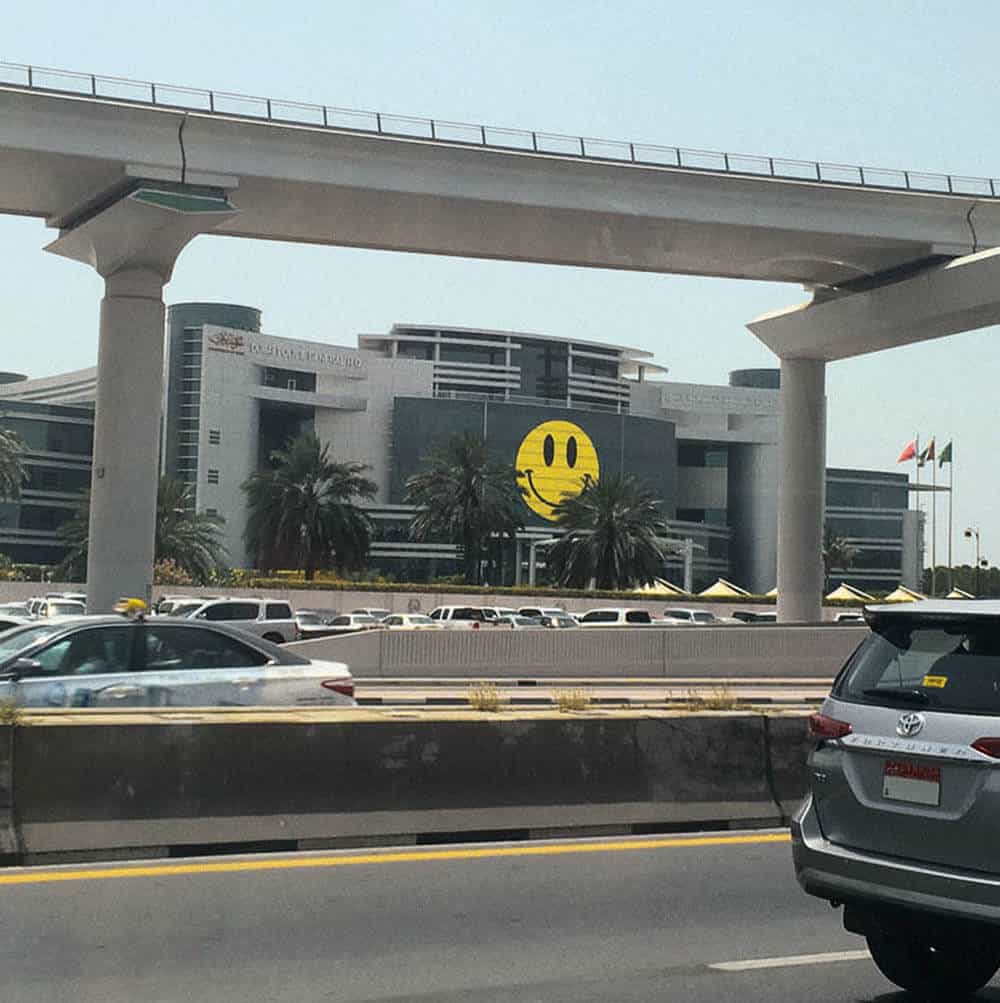 “What we forget, and perhaps what Dubai relies on us forgetting, is that happiness is much more than pleasure without pain.”

And yet, the campaign is not being taken lightly. “Happiness is a serious job for governments,” said Al Roumi, shortly after her appointment as Minister of State for Happiness. “The role of the government is to create an environment where people can flourish – can reach their potential – and choose to be happy.”

This framework is led by Smart Office Dubai – an enterprise that is collaborating with private sector and government partners to “empower, deliver and promote an efficient, seamless, safe and impactful city experience for residents and visitors”. Together, the ‘Happiness Agenda’ and Smart Office Dubai “will build a unified definition of happiness, beginning with a scientifically aligned cultural baseline and understanding of basic and higher needs in Dubai”. Hopefully for the basic and higher needs of all.

What is interesting to note, is that not only does Dubai have its goals set on being the happiest city in the world by 2021, it is also aiming to be an established “vibrant, global Arabian metropolis that shapes culture and arts in the region and the world”. Both goals form a part of Dubai’s vision for a city of happy, creative and (some) empowered people who proudly celebrate their cultural identities. Art Dubai is a major contributor to this vision, offering visitors a unique opportunity to discover hundreds of new and established galleries, supporting the mission of nurturing local talent, and inviting all members of the community to immerse themselves in the joy of art – “Art Dubai has a wonderful ripple effect, spreading happiness and positivity across society.” 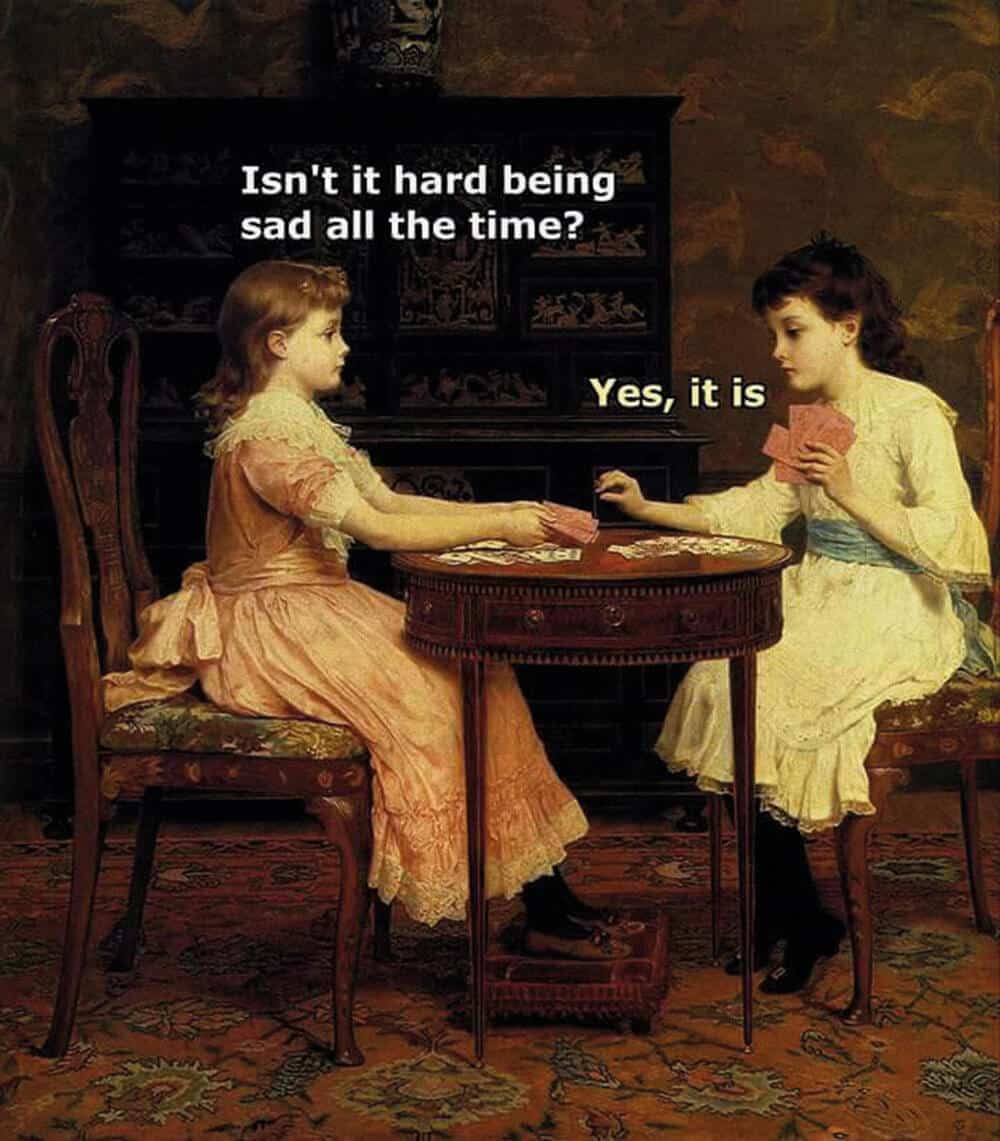 Two girls playing cards: the one asks, “Isn’t it hard being sad all the time?” “Yes, it is.“, the other answers. The meme can be found on Classical Art Meme’s Facebook page.

Throughout history, there has been speculation that sadness and creativity are inextricably linked, and that vulnerability and negative emotions lead to a greater artistic creativity. John Keats famously declared, “do you not see how necessary a world of pains and troubles is to school an intelligence and make it a soul?”, and Edvard Munch wrote in his diary, “my fear of life is necessary to me, as is my illness. They are indistinguishable from me, and their destruction would destroy my art”. The struggle of these artists – to name a few – has been echoed in popular culture for decades, giving rise to the belief that artists are more susceptible to a range of mental illnesses. Art also enhances meaning by stimulating integrative complexity and aesthetic interest, where negative emotions play an important role – in other words, the power of negative emotions for art’s purpose. It would seem that where creativity lies, sadness lurks.

In the Global Happiness Policy Report 2018, Jeffrey D.Sachs – Director of the Global Happiness Council – writes that “since mental illnesses are often stigmatized, they are often kept hidden from view and from the public policy debate, despite the huge costs they impose on families and on society, and the huge benefits that would accrue to a systematic upscaling of mental health services.” Surely the smiley faces do not attest to this.

For Dubai to become the happy, creative and empowered city that it so wishes to be, perhaps it should put less money into manufacturing happiness, and more money into making mental health its main priority – not to mention for the lives of those who fall outside of the UAE’s law. Surrounded by the promise of easy happiness – the enormous smiley faces, the mobile hashtags, and the annoying and literal user- ‘friendly’ online platforms – Dubai needs to acknowledge that happiness is not made up of a series of emoticons, but is inspired and enhanced by deep feelings of sadness, ascertaining that it is okay to be unhappy. Once acknowledged, Dubai certainly may become a cultural and artistic metropolis for both the region and the world – and a remarkably happy one at that.