Capturing Place or a Moment

With a collection of paintings, prints, photographs and even a musical score, each artist has taken an idea, object or invention and broken it down to create new meaning by superimposing their process onto the finished work.

By including evidence of the artists’ own interferences with their respective subject matter, the works reflect the susceptibility of any isolated depiction to the vagaries of its producer. 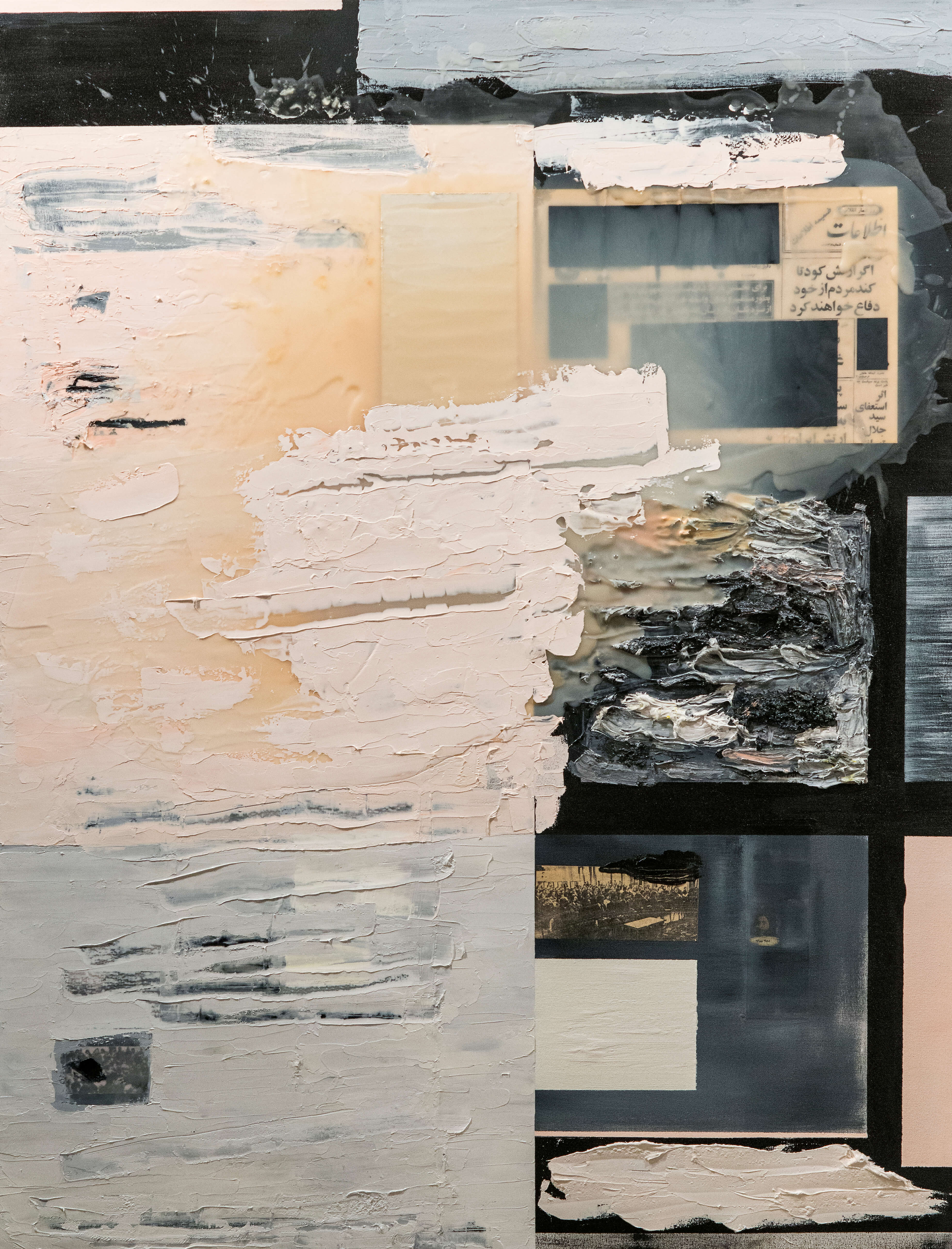 Sepideh Mehraban challenges versions of reality and conjures new forms in her paintings, which respond to the contradictions she perceives between official and personal histories in her native Iran. Mehraban’s practice tracks the discrepancies between her own lived experience in Iran and the state’s biased representation of the same period.

Drawing from Jean Baudrillard’s appraisal of today’s world as a ‘hyperreal’ space in which reality and imitation are potentially mistakable, Mehraban uses family snapshots – some her own, some not – as source material to look at how an individual’s presumed reality can be misappropriated and, through painting, further interfered with.

“Each individual’s own ‘reality’ and ‘truth’ as mediated by life-world, personal history, and personal experience,” says Mehraban. “Works of art, artistic manifestations, and political declarations are examples of constructs. It is in this context that I place the personal histories of Iranian younger generation alongside what has been documented in public history in my paintings, in order to create a new ‘reality’.”

Emma Kielczynska uses the tactile surfaces of everyday things as unconventional printing surfaces. Orange bags, nets, weaves and hessian are dipped dye and pressed onto paper to create beautiful, abstract monotypes. “I am particularly fascinated by different weaves and the way they come apart as I find this symbolic of the fabric of reality”, Kielczynska says.

Elsewhere, Kielczynska layers reflective paint on black backgrounds to create works that will appear in a fleeting moment when illuminated by the light of a camera’s flash, much like road signs made visible by a car’s headlights. Fleeting and personal, the artworks briefly come alive and seem to dance before the eyes, disappearing back into still blackness when the light is removed.

“My use of deep black backgrounds represents the darkness of space that we are floating through. By making use of reflective glass beads, I have the ability to almost paint and capture light, which is symbolic of our perception of life activated by light interacting with our eyes.”

By digitally manipulating or corrupting the images before her painting begins, she further loosens them from their apparent stasis. Working on several works at once, Cronje then impulsively adds complexity and layers to the canvas as her wavering disposition imbues itself into the image.

“Water is regarded as a tensile surface inscribed by the particularities of time, place, atmospheric condition and memory. I treat water as a marred, opaque and troubled surface rather than a pure, transparent entity,” says Cronje. 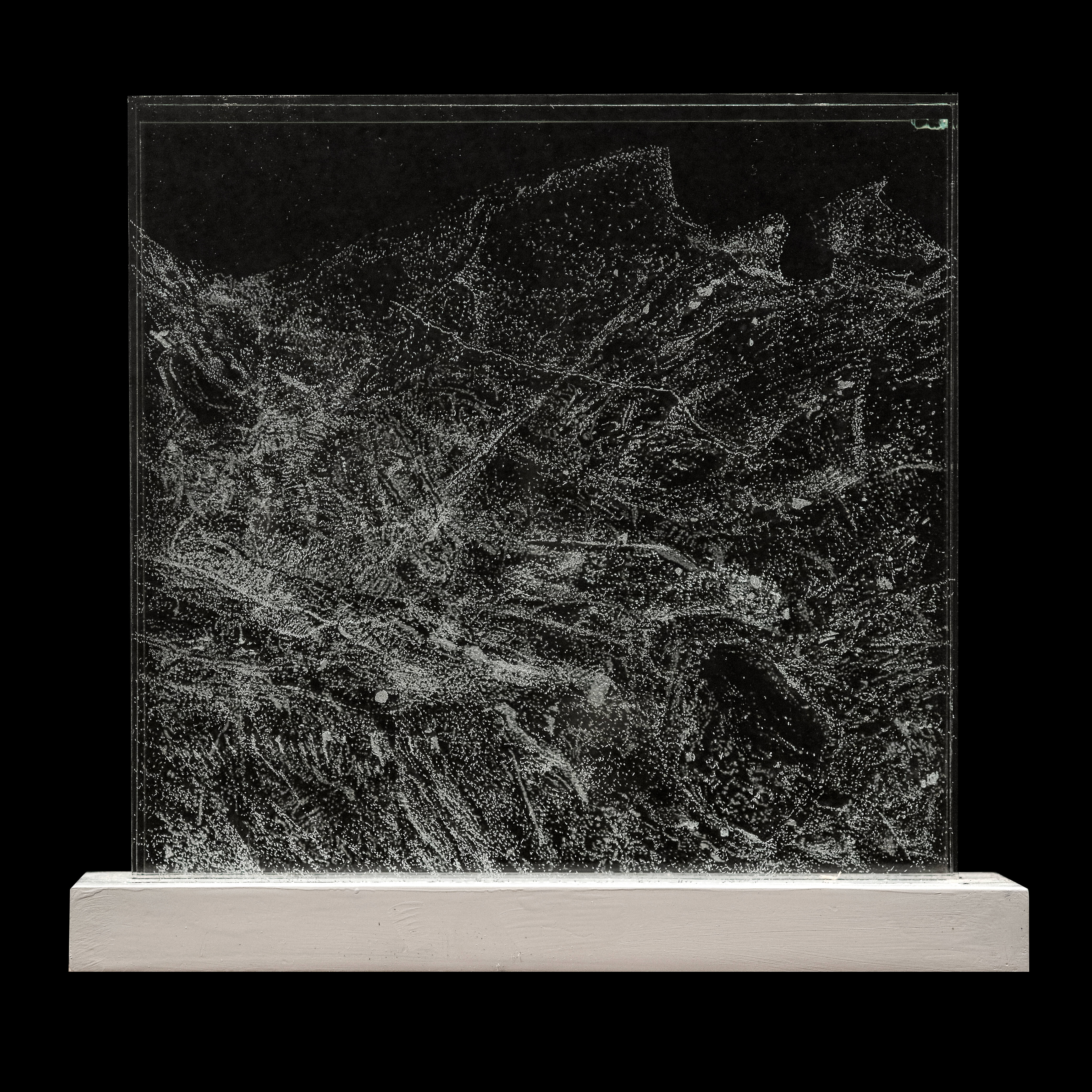 Experiment and process is at the heart of Madeline Groenewald’s multifarious collection of works. Limiting her movement to an extreme by selecting a particular rock on Bloubergstrand beach as a vantage point, she zooms in on small areas and explores these narrowed spaces in painstaking detail.

Assuming the role of pseudo-scientist, Groenewald meticulously maps the area to produce ‘natural data’, which was in turn is applied to music composition systems with a view to converting visual forms to musical sound.

To this end, Waveflow translates ripple patterns left in the sand by the swash and backwash of waves into a series of etchings, visual scores and wind ensemble music. The resulting musical movements will be performed by a French horn quartet in the gallery.

“The production method through the medium of etching intends to echo the nature of the shore as a temporal record holder of motion and time,” says Groenewald.

With Transcripts in Sand and Travels in Stone, Groenewald recorded sections of the changing sandy landscape at the rock’s edges over the course of three days. Those shifting patterns were then engraved onto three glass panels, a substance itself forged from sand.

Groenewald counts herself as a variable within the process, mapping her own movements while producing the work and kneading that data into the finished product. “As much as this work is a map of stilled movement and duration, it is also a map of my own mapping process.”