DK Conservators: Restoring Works on Paper to their Former Glory

Dieter Wickert-Ludemann and Keith Seaford are DK Conservators, a Cape Town-based paper conservation and restoration studio.  DK Conservators have worked closely with ARTsouthAFRICA previously to restore an artwork by Sam Nhlengethwa, A Black Car (2001), a print that had been damaged by dust and water. With the support of the Department of Public Works, DK Conservators undertook a project for the Groote Schuur Estate in Cape Town, completed earlier this year, restoring a collection of books and works on paper. 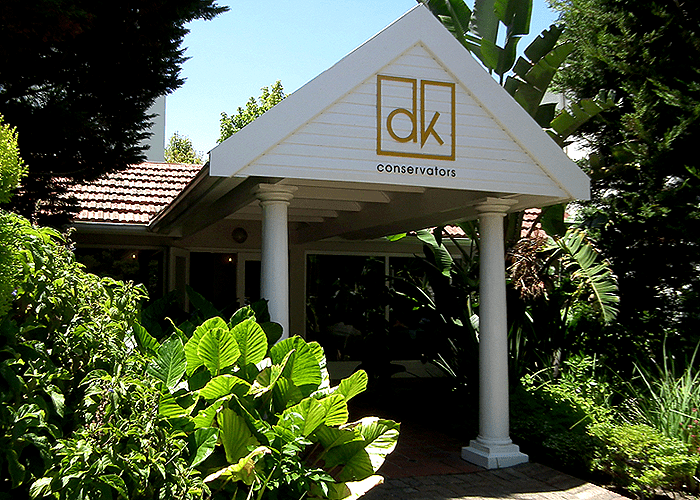 DK Conservators offers a variety of services including conservation/restoration of artworks on paper, documents, books and antique photographs. Their studio is located in Kenilworth, Cape Town and situated in a tranquil garden setting. The quietness of the green environment lends itself perfectly to the conservation team being able to focus their attentions on the care of artifacts on paper for our various clients. These include private collectors, galleries and art dealers as well as Government departments.

Currently, DK Conservators are busy with a very interesting conservation project at the Groote Schuur Estate in Cape Town, funded by the Department of Public Works.

Dr. Rayda Becker, curator of the collections at Groote Schuur, writes the following:

“In Groote Schuur, the house that Cecil John Rhodes enlarged and built with architect Herbert Baker in 1894 and again in 1896, are many collections. All of these carry histories about other times, places and the people who occupied the house throughout the 20th and 21st centuries. As part of the maintenance programme for the house a priority was works on paper (books and artworks).

The collection of books contains over 2000 copies and together they cover a range of topics from maps, travel, the ancient world, religion, politics, biographies, etc. The most personal and valuable are the 440 volumes of Greek and Roman classics bound in red Moroccan leather. Each is a translation in English of one of the authors referred to in Edward Gibbon’s History and decline and fall of the Roman Empire. The story goes that Rhodes died with a copy in his hands and the reason for the translations is that Rhodes did not read Latin and Greek and was unable to understand the content of the quotes in the History and decline…  Being the kind of person he was, Rhodes organized with Hatchards & Company in London to translate and type the books onto the best paper available. Although he did not complete the project the collection remains unique and many of the texts are still not available in English.

The art collection is not large but there are valuable and relevant pieces in it (the most numerous are the prints numbering 22). We started with the art works that were in crisis, damaged and of public interest. We selected the ‘Map of the Properties’ owned by  Rhodes and which he bequeathed to the nation, the set of six etchings of ‘Marriage a la Mode’ by William Hogarth, a ‘Certificate’ from Kimberley and the battle of ‘Atbara.’”

A phased approach to this conservation project has been adopted in consultation with the curator (Rayda Becker) the house manager (Najwaa Francke) and officials from the department of Public Works, Western Cape. The first phase concentrated on the most critically damaged items, both books and artworks. 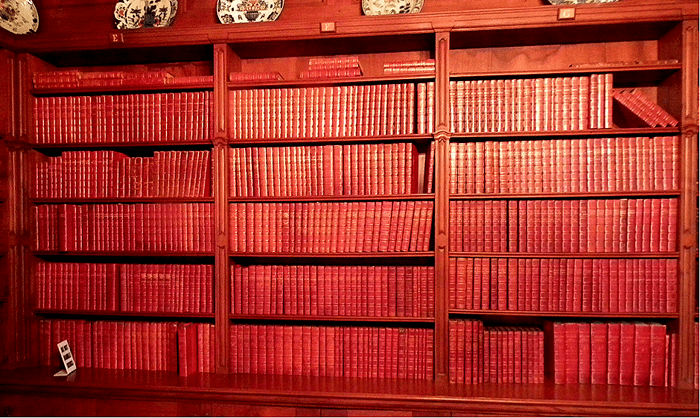 The collection of Morrocan leather-bound books

A selection of 235 of the 440 hand-typed volumes was made. These books had suffered from years of use. Damage to the hinges, both inner and outer and the head caps, was evident. Some book-covers had become detached from the book-blocks. Scuffing of the leather of these half-leather bindings was widespread. The leather had also dried out considerably in spite of humidifiers being present in most book repositories in the house. Extensive foxing of the marbled end-leaves was present.

To begin with, the books were dry-cleaned, meaning that each page of every book was dusted using soft brushes. At the same time detailed descriptions of the damage was prepared which will form part of the post-conservation reports to be given to the curator on completion of the project. New archival, acid-free end-leaves were tipped in behind the first and last fly-leaf to protect the book-block from the acid content of the book covers. The existing marbled end-leaves were de-acidified to arrest further foxing. The head-caps and hinges were repaired using Japanese Tissue strips applied with reversible Methylcellulose to bind together the damaged leather. The tissue used was previously colored to match the red leather. Finally an appropriate leather dressing was applied to the bindings. 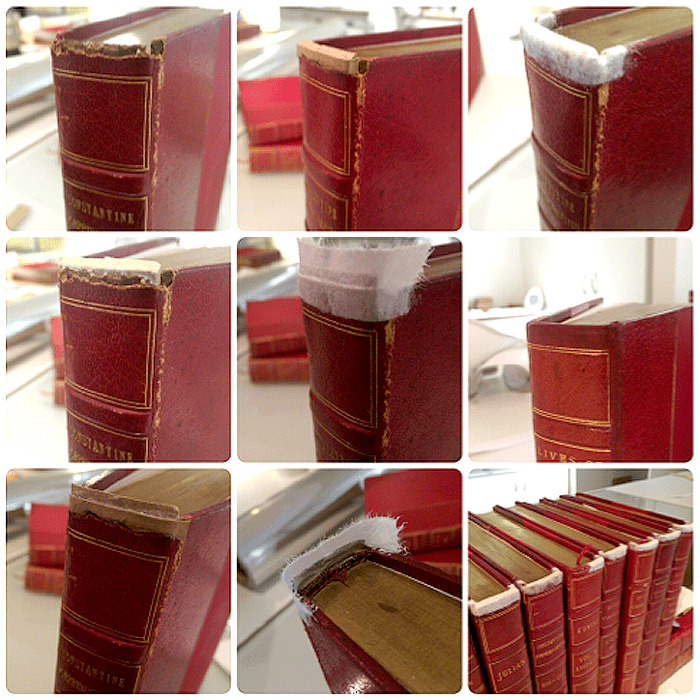 Of the artworks the curator made a selection of 4, which had suffered extensive damage. Acidic backing boards and exposure to atmospheric fluctuations such as temperature, humidity and UV radiation had left foxing stains, embrittlement of the paper and mould growth on the surface. Acid burn marks along the aperture lines of the old window mats were present on the artworks. 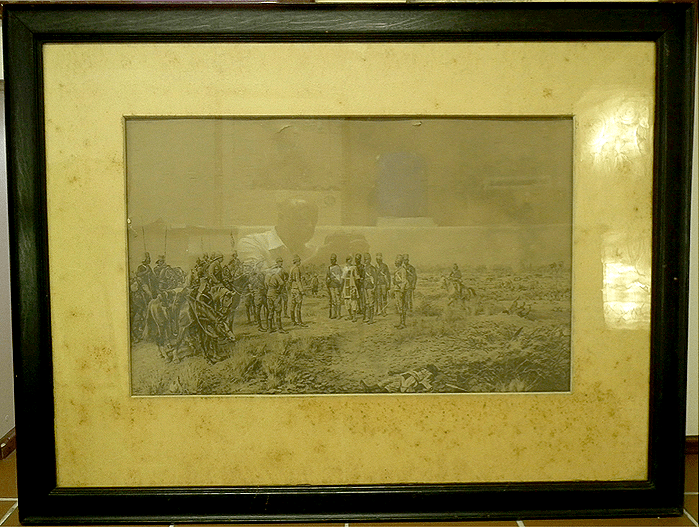 Photo of The Battle of Atbara before conservation 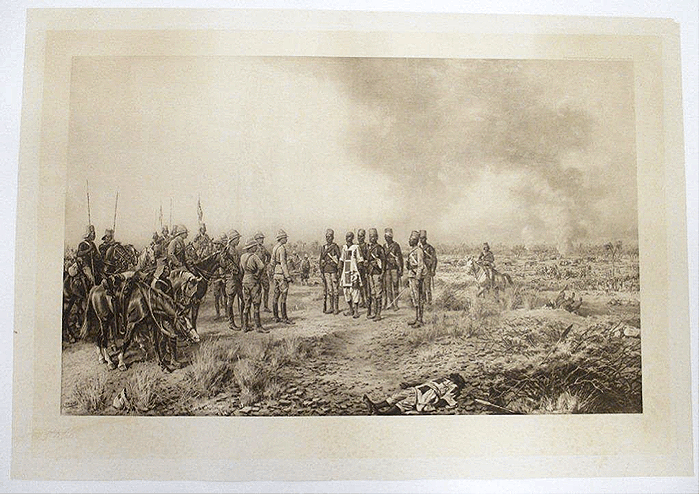 Photo of The Battle of Atbara after conservation

“We hope that this project will continue until all the books and the other collections in Groote Schuur are stabilized and conserved and will, in the future, only require regular, annual maintenance.”