in News Articles 2013
Share on facebook
Share on twitter
Share on email
Share on whatsapp
The Durban International Film Festival takes place from 17 – 27 July 2014. The festival includes more than 200 theatrical screenings and a full seminar and workshop programme, as well as the Wavescape Film Festival, the Wild Talk Africa Film Festival.
There are also various industry initiatives, including the 7th Talents Durban (in cooperation with Talents Berlinale) and the 5th Durban FilmMart co-production market (in partnership with the Durban Film Office).
Some of the highlights of DIFF 2014: 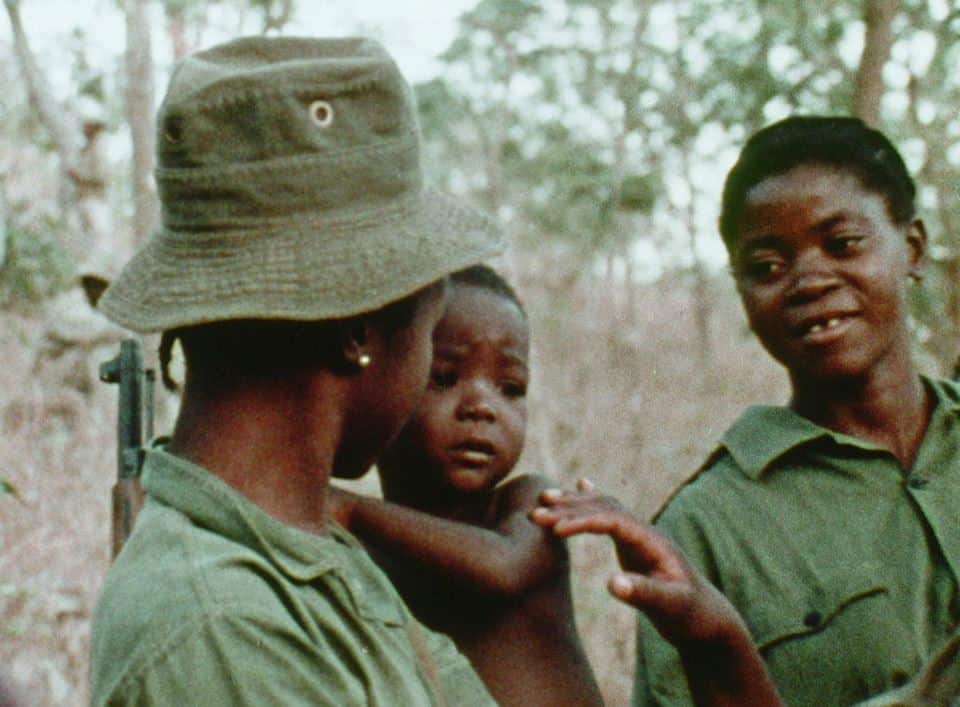 Still from ‘Concerning Violence’. Courtesy of the DIFF.
AfriDocs Film Week 21-27 July 2014
A world first will be taking place this month when a full week of African documentary films are broadcast across sub-Saharan Africa on DStv channel ED (channel 190) and GOtv (channel 65), from the Durban International Film Festival – the largest film festival in South Africa that takes place from 17 to 27 July. This will see a diverse and exciting range of films screened across 49 countries of sub-Saharan Africa. The AfriDocs Film Week will connect the largest film festival in Africa through a ‘film festival on your screen’ featuring documentary films from thirteen countries in Africa – The D.R.C., Kenya, Liberia, Mali, Mozambique, Niger, Nigeria, Rwanda, Senegal, South Africa, South Sudan, Tanzania, Uganda.
For the full programme schedule and synopses of the films, please go to AfriDocs or their Facebook page. 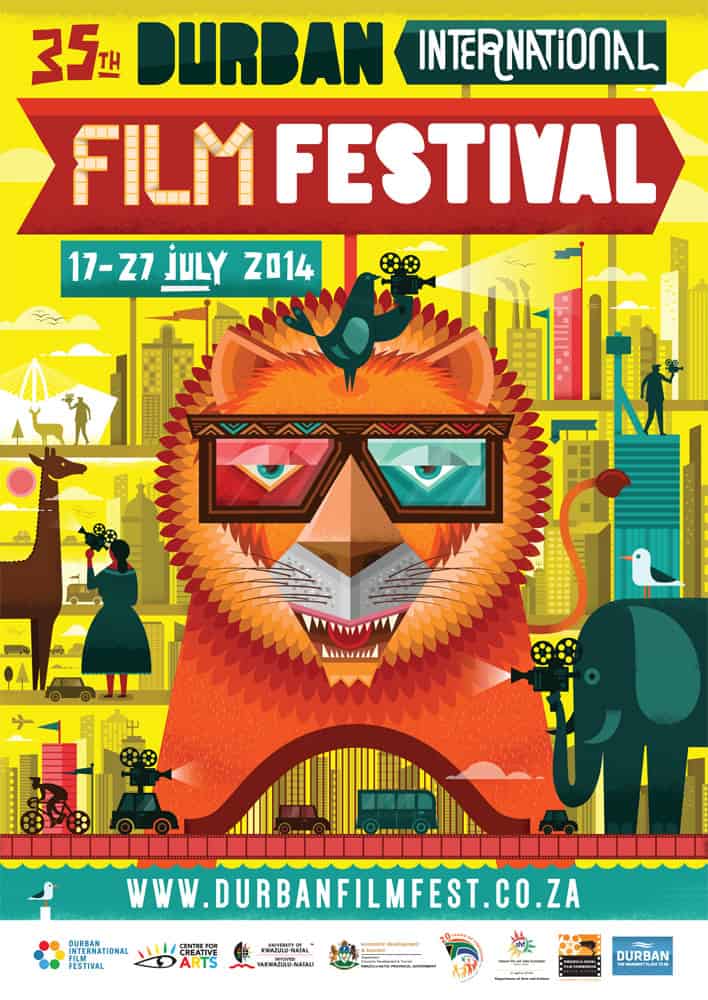 35th DIFF Poster, by Wesley van Eeden. Courtesy of the DIFF
The DIFF Commemorates 35th Edition with Festival Poster Retrospective Exhibition at KZNSA
In celebration of its 35th year, the Durban International Film Festival is delighted to announce a retrospective exhibition of its iconic poster design over the course of its existence. The exhibition will be presented for the duration of the festival at the KZNSA gallery cafe, which also serves as a hub for this year’s short film programme. Long-time festival goers will be treated to a nostalgic journey, while first-timers can enjoy an induction into the vivid world of the well-loved event through its graphic design, culminating in this year’s striking poster by Wesley van Eeden.
The digital archive of posters can be found here. 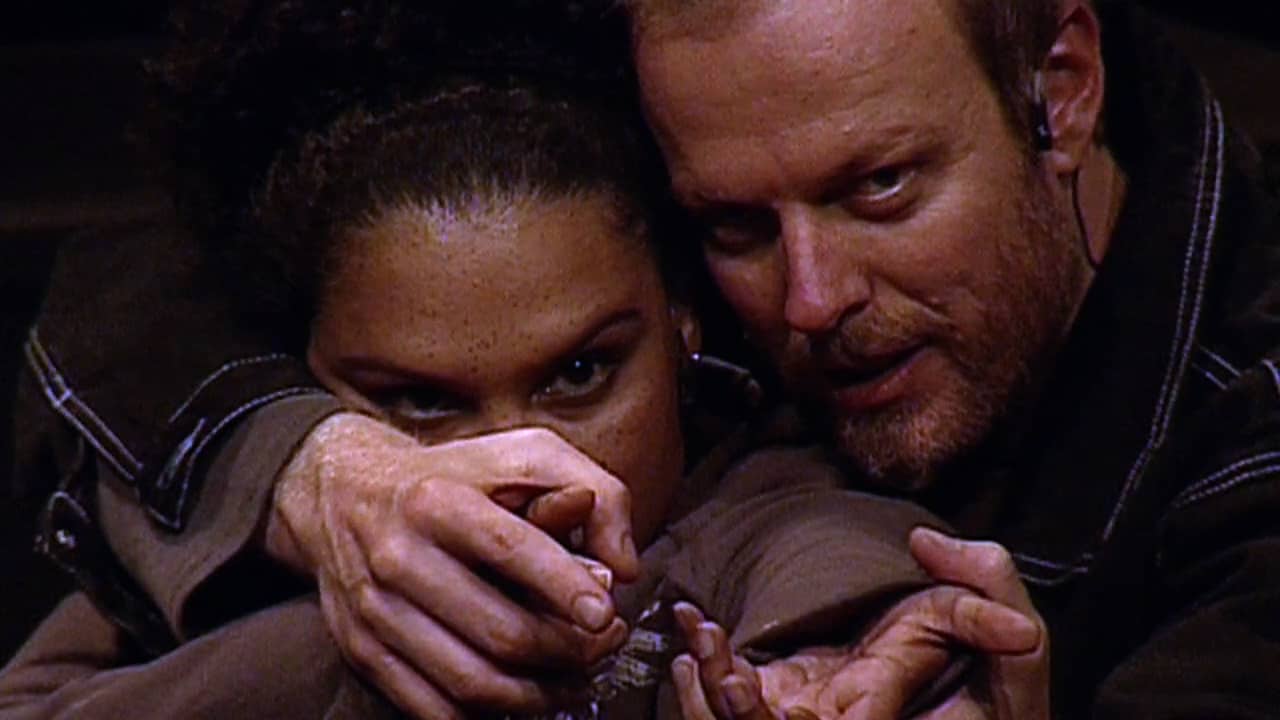 Still from A Snake Gives Birth to a Snake. Courtesy of DIFF.
VIP Screening for DIFF World Première Documentary; A Snake Gives Birth to a Snake: Suncoast: Sunday 20 July
The gala screening of the world première of A Snake Gives Birth to a Snake, the much-anticipated documentary debut of celebrated television/film/theatre director Michael Lessac, promises to be one of the highlights of this year’s DIFF, with some of the country’s foremost peace mediators joining members of the cast and crew for the world première screening, followed by a Q&A session at the Suncoast Cinecentre on Sunday 20 July at 17h15.
Dr Alex Boraine, deputy chairperson of the TRC, and multi-award-winning veteran political commentator / author Max du Preez will be attending the gala and leading the dialogue after the screening. They will be joined by actors Thembi Mtshali-Jones,  Nick Boraine, and Fana Mokoena who will share their experiences of the journey that led to ‘A Snake Gives Birth to a Snake’. The documentary follows a diverse group of South African actors as they tour global war-torn regions to share South Africa’s experience of reconciliation. As they ignite dialogue among people with raw memories of atrocity, the actors find they must confront once again our country’s complicated and violent past – and question their own capacity for healing and forgiveness.
“The film highlights the valuable role arts played in peace and reconciliation, and the genuine contribution arts can play in the global reconciliation movement and ongoing nation-building,” considers actor Nick Boraine who appears in the movie and who was part of the A Snake Gives Birth to a Snake project since its inception. 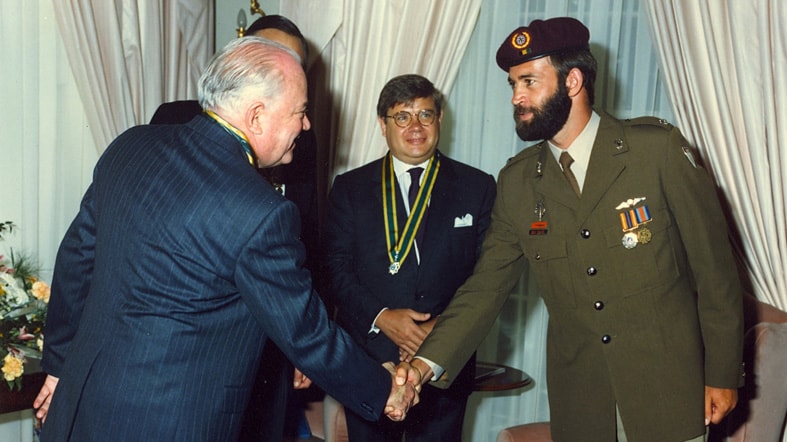 Still from Plot for Peace. Courtesy of DIFF.
Award winning documentary PLOT FOR PEACE to premiere at DIFF
In celebration of twenty years of South Africa’s democracy, the Ichikowitz Family Foundation (IFF) launches its African Oral History Archive (AOHA) initiative to pay tribute to those who lie at the heart of the events that shaped South Africa’s modern history. The film ‘Plot for Peace’ is the first of a series of political and historical documentaries produced by AOHA that will roll out this year, and will be showcased for the first time on African soil at the Durban International Film Festival which takes place from July 17 to 27. This highly acclaimed documentary lands off the back of a successful tour of the international film festival and commercial circuit, winning no less than eight awards including; Best International Feature Documentary at the 25th Galway Film Festival and the Special Jury Award at the Palm Springs International Film Festival. The production team is led by multiple Emmy award-winning, South African filmmaker Mandy Jacobson.
The team uncovered the secret story of Jean-Yves Ollivier, aka ‘Monsiuer Jacques,’ whose behind-the-scenes bargaining was instrumental in bringing about regional peace and heralding the dawn of South Africa’s long walk to freedom.
Exclusive interviews from current and former heads of state including President Joachim Chissano, former South African president Thabo Mbeki, President Denis Sassou Nguesso, and other key role players including Winnie Madikizela-Mandela, Pik Botha, Jorge Risquet and Chester Crocker bear vivid testimony to the secret dealings that were able to secure regional peace and end the system of segregation that threatened to bring South Africa to its knees.
“In this narrative, we discover a story that Jean-Yves Ollivier kept secret for over thirty years.  It was like finding a character straight out of a John LeCarre novel and we were thus able to craft this true life historic story as a political thriller,” said Producer and Director Mandy Jacobson.
For more information about the Durban International Film Festival, click here.