‘Ebony in the Ivory Tower:’ The Launch of ICA

At the beginning of her speech, Zethu Matebeni thanked performer Khanyisile Mbongwa for making the podium a comfortable space, for the first time. The performance by Mbongwa, preceding this speech, was titled Umnikelo Oshisiwe (a burnt offering). It was comprised of chants, repetitions of parts of prayer, whistling, a song in Xhosa and the donning of traditional headdress coupled with a symbolic disrobing. Afterwards, Jay Pather described it as a troubled purification.

This sense of unearthing and purification with the aim of transforming criticality and opening up academia and the cultural sector is what characterized the launch of The Institute for Creative Arts (ICA) on Tuesday evening, 5th April 2016. 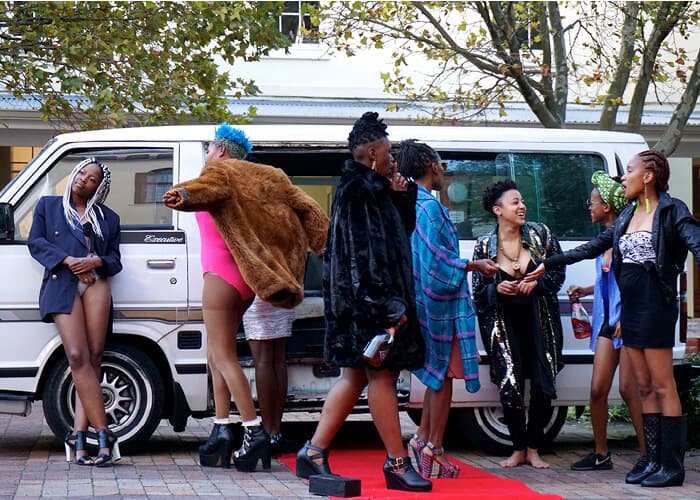 The iQhiya collective perform Commute Part II at the launch of ICA at the Michaelis School of Fine Art, 2016. Photo: Sven Christian

More than free wine, cheese platters and congratulatory speeches, this event was symbolic of the possibility of true decolonization. iQhiya began the proceedings with Commute Part II, their interactive performance piece. Staged inside a standard commuter taxi – their mobile studio space –  it spoke to the act of journeying from the periphery to the centre.

Inside the taxi, the artists and spectators were drinking sparkling wine and playing songs by Beyoncé and Rihanna; they’d come out to dance dressed exuberantly in fur coats, high heels and swimsuits. This emphasized the fact that their discussion was about normative gender identities, the structural roots of racial conflicts in contemporary South Africa, aesthetic production in a fraught political climate as well as personal experiences of pain. Their production was a combination of conversation, criticality, cerebrality and celebration. As a performance it asked us to reconsider the semiotics of refinement and intellectualism. 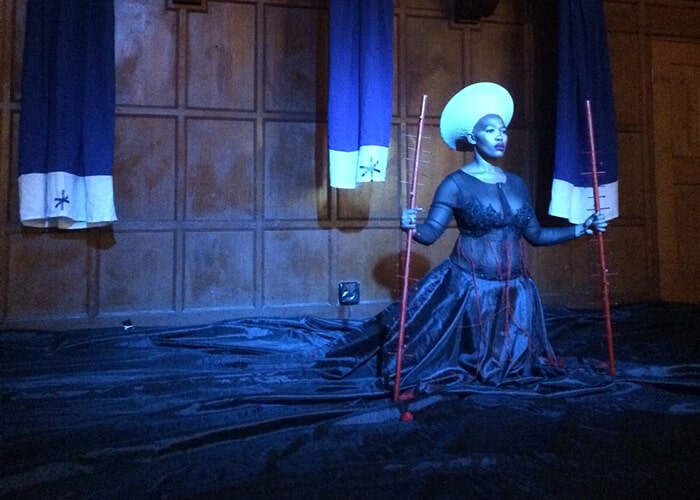 Because of the legacy of enlightenment ideals and European standards, oxford shirts, tweed blazers, flannel skirts and a keen understanding of operettas are encoded into our understanding of the intelligentsia and literati. The artists, former and current students of the Michaelis Art School,  repackaged their black bodies as a site not of contestation but of celebration; they disrupted dualisms, essentialisms and fetishisms, showing their bodies as extensions of their minds, not hindrances to it. The ‘ebony’ usually repressed inside the ivory tower spoke, and it spoke with gaiety, verve and conviction. The speakers and performances in the rest of the line-up were an extension of this.

After a welcome by Sakhela Buhlungu, the Dean of Humanities at UCT, Imraan Coovaadia spoke about Relocations: Reading Culture In South Africa. He explained the necessity of cultural products and expanded on how the book of essays explores the effect of literature in changing thought-processes. What he urged was that the audience consider the link between building a decolonial canon with directing and redirecting decolonial energies. Suren Pillay offered another perspective later on, proposing that cultural machinery can contribute to political dogma and dangerous nationalisms. Using different perspectives around negritude, his paper was a reminder of the necessity of reflexivity while we embark on the task of decolonizing cultural spaces. The speech that got the standing ovation from students, however, was by Zethu Matebeni. 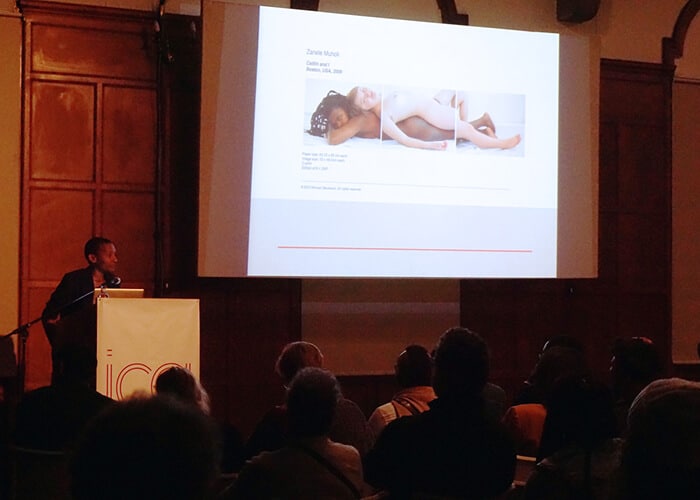 Dr Zethu Matebeni’s speech at the launch of ICA, Authentic Reality in the Academy. The projected image is Zanele Muholi’s Caitlin and I.

Dr Zethu Matebeni’s speech, titled Authentic Reality in the Academy, provided truth without euphemisms. She exposed the flaws within the workings of academia such as covert discrediting and the offensive discourse around standards.

Juxtaposing the time it takes for recognition for black academics to Nelson Mandela’s prison-term she illustrated that what is currently at play is an “impaired social vision.” She problematized that even at this time “[her] participation [is still merely] your continued privilege.”

However, focalised through Zanele Muholi’s image Caitlin and I, her talk expressed the desire for symbiosis. What is hoped for is a transformation that is not founded on the further exploitation of the backs of black people; instead the goal is to “lift the myopic veil within knowledge” in order to attain real freedom. 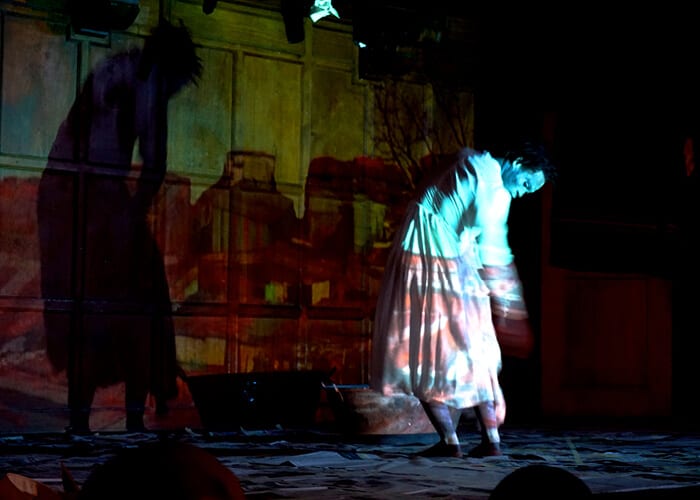 Owen Manamela-Mogane performs #Untitled, 2016. ICA launch at Michaelis School of Fine Art. Photo: Sven Christian.
Throughout the evening there was a body at the door, wrapped in a storm-blanket. It could have been anyone. It was later revealed that it was a performance by PhD student, Gabrielle Goliath, with the ICA. Cloaked, stepped over in order to gain entry but otherwise ignored, it was a reminder that that our cultural and academic spaces are not neutral. Evocative of Marikana and other South African tragedies, it was a reminder that there are levels of complicity and guilt attached to all our movements. 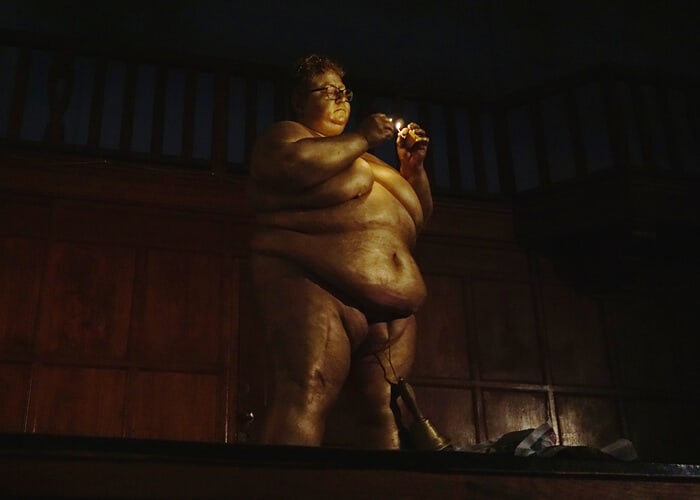 Dean Hutton performs Goldendean, 2016. ICA launch, Michaelis School of Fine Art. Photo: Sven Christian.
Therefore, the significance of this event lay in that it suggested the possibility of a true beginning, a reconciliation founded on a truth that is not incomplete. It is said that post-apartheid South Africa’s original sin was the granting of a pardon before the acknowledgement of the offense. This event displayed the possibility of a reprieve. The often lauded ‘criticality’ that the academy is founded on was looked at critically; a re-examination of the language (both text and visual) used when talking about thought.

The ICA, a reincarnation of GIPCA, is funded by the Andrew W Mellon Foundation. From their launch, it wouldn’t be excessive to say the cultural sector stands only to gain from this organisation.