The Mangbetu people, they say, migrated from present day South Sudan between the 18th and 19th century, southwards towards the Democratic Republic of Congo (DRC) where they eventually settled in the North Eastern part of the country, in what is now the Orientale province. 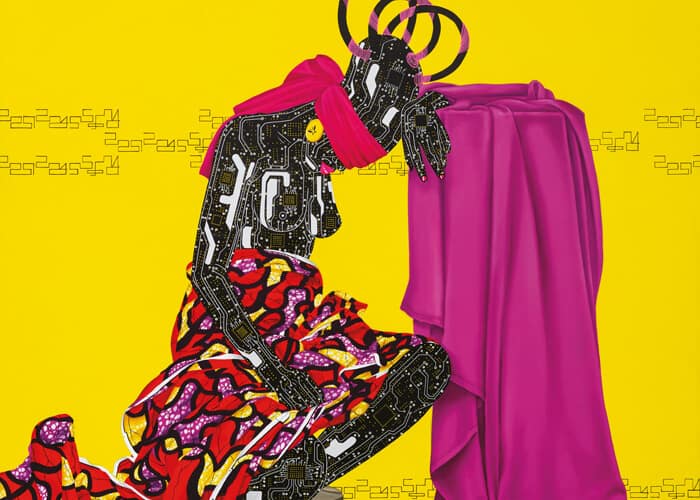 Fast forward to 2016. In his ‘Mangbetu’ series, artist Eddy Kamuanga Ilunga merges tradition with modernity. He depicts women with intricate hair styles and adornments on their distinct, elongated heads. Their nails and lips are painted bright red, blue, and purple as they perform daily duties or sit in contemplative thought. Etched into their bodies are electronic microchips and circuits.

Ilunga grew up with five sisters and just one brother. Over the years as he was surrounded by the fabrics, jewellery, fashion accessories, magazines and makeup of his sisters, occupying himself with technology, television, radio, Internet and video games. As he began to step into his own as an artist these elements began to manifest themselves in his work.

The bold colours in Ilunga’s paintings contrast the old black and white photos of the Mangbetu in the early 20th century. Where the women were once photographed naked, Ilunga dresses them in the ubiquitous Dutch wax fabrics that have become synonymous with the continent. In one painting a woman balances a handbag on her lap, in another, a woman is holding a traditional Mangbetu tool. 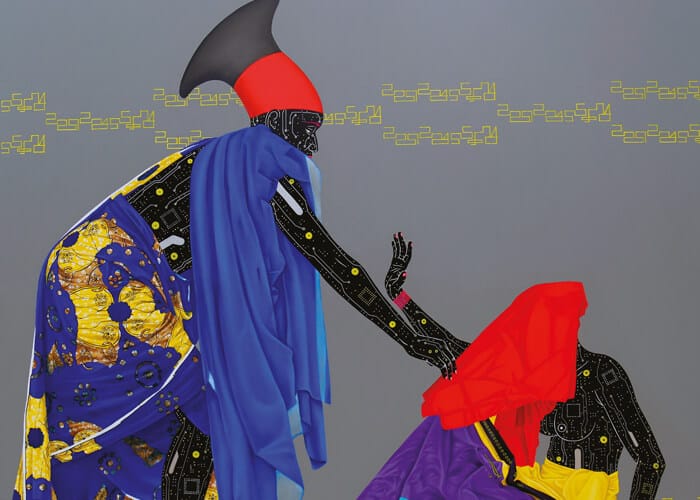 The series conjures up ideas of Afrofuturism, where science and future technologies converge in the present. Ilunga manages to evoke feelings of despair, uncertainty, assuredness and compassion through his paintings. One can’t help but feel that we, the viewers, have been shown a glimpse of the inner turmoil of a community at a crossroads, with its strong heritage and traditions in one direction and the pulls of globalisation in the other.

While art from Africa is making waves on the continent and beyond, there are many in the DRC who find the visual arts suspicious, a result, Ilunga says, of the widespread influence of born-again Christian churches that portray the arts as dark and reminiscent of “bad spirits.” As such, the arts does not enjoy the same kind of popularity as Congolese soukous and rumba, music that can be heard in clubs and bars across the corners of the continent.

With a tumultuous past ranging from the horrific crimes committed under the rule of the Belgian King Leopald II, followed by years of brutal colonial rule and then further periods of looting and conflict, the Congolese people have a history of trauma behind them that leaks into the present. “Music helps them to relax and forget their troubles,” Ilunga says. “As a result, the arts have been completely removed from the Congolese memory.” 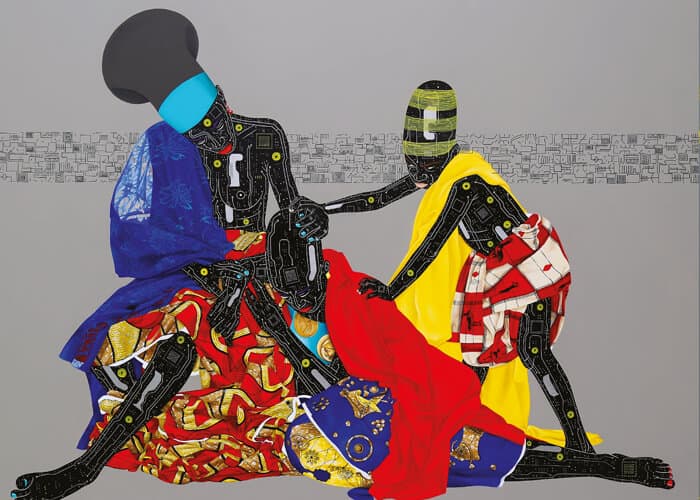 But there is a revival. During the opening of Ilunga’s debut solo show in June 2016 at the October Gallery in London, cultural historian and journalist Yves Ngoy spoke of artists who, over the years, have been pushing the art agenda. And Ilunga is also doing his part. As the founder of Studio M’Pongo, a Congolese art collective based in Kinshasa, he hopes to place the visual arts firmly in the Congolese psyche.“Us Congolese artists have a lot of work to do in promoting art education and healing for the population,” he enthuses. “It is a very important factor for the development of a country.”

While art helped Ilunga from a young age understand his own existence and identity, he hopes it will do the same for others. “Art helps to maintain a connection between the past, present and future,” he says. “It can even help us to stay strong during conflict and help to rebuild a nation afterwards.”

Billie A. McTernan is a writer and editor covering the arts, culture and political affairs across Africa.