In these pages we explore themes ranging from human happiness to the mental state of Artificial Intelligence, and how emoji’s are potentially ‘standing in’ for our true emotions. We look at these phenomena – in cultures that are as equally diverse as they are similar – and how these emerging destinations are relevant for dreamers both human and robot alike.

Nigerian artist, Victor Ehikamenor’s work, The Metamorphosis of a Tall Dream, completed during a four-week residency with Art Dubai Art Fair as part of a solo project entitled ‘Cartographers of Dreams’ – reflects on dreams of happiness, wealth, and success – and speaks of a transformation – from nothing to everything, and oppression to liberation. The work, undoubtedly, also speaks of Africa’s ambitions. “It reminds me of how you get to that point – where there is nothing in the desert, and then suddenly you see these buildings rising, rising, rising – like magic – the space metamorphosed into something that is almost magical”.

With a Minister of State for Happiness – Dubai is a city where emojis are plastered across the walls and windows of their government buildings in a bid to up their happiness index – and where their public transport supports the hashtag ‘we move happy’. Ehikamenor also comments that “Dubai is a city of dreams and of dreamers. Whoever founded Dubai had a very solid dream of how he wanted the city to be, and then he made sure that everyone from the outside world had to buy into it.” 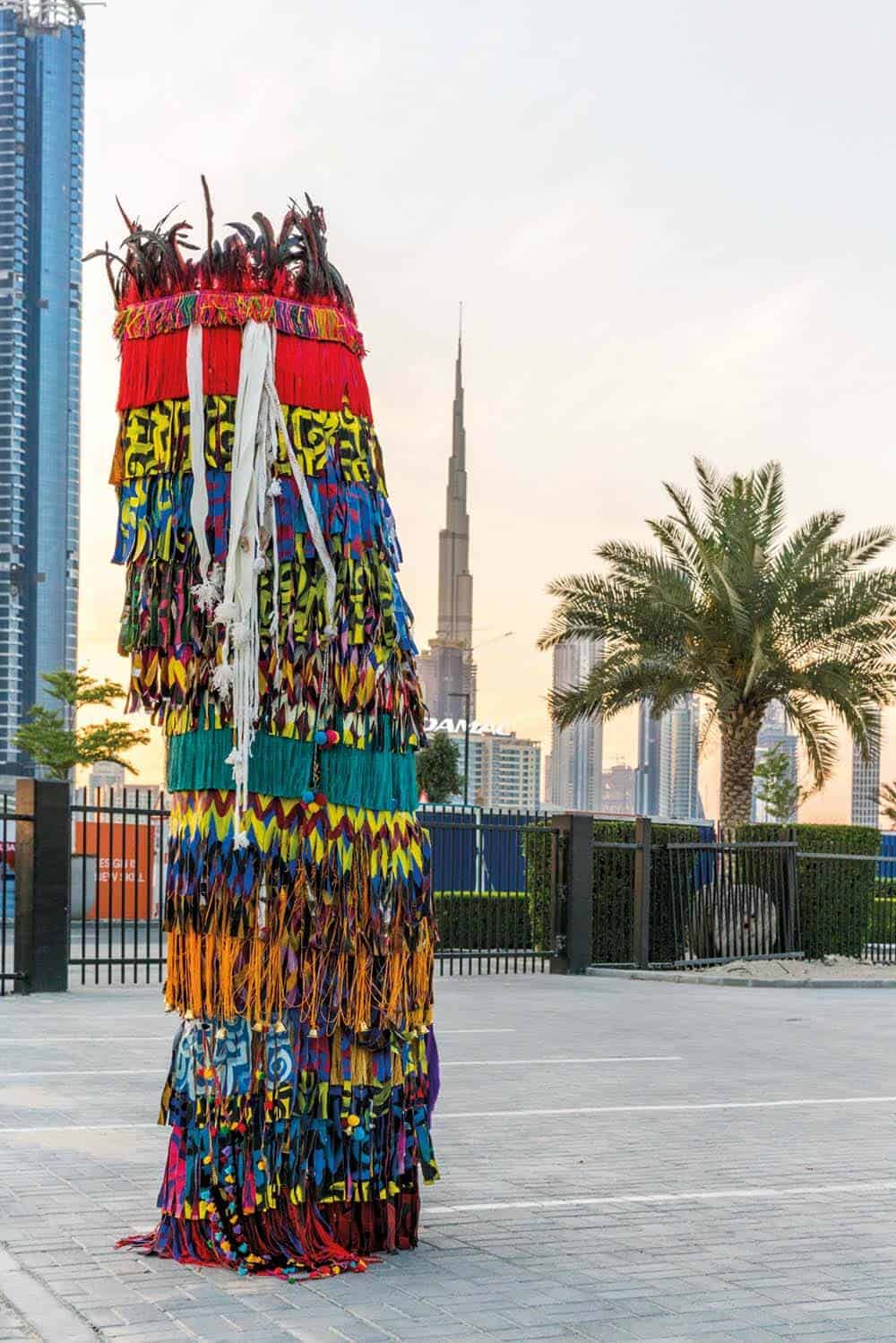 Our cover artist Toufic Beyhum – born in Beirut and now living and working in Namibia – found inspiration for his series, ‘Amoji Masks’, in Namibian daily life and local traditional materials. Beyhum’s use of emojis, in contrast to Dubai, challenges the significance of using emojis to represent human emotion, where he captures the significance of this new universal language and places Africa’s inimitable mark on it. ART AFRICA is excited to be the first publication to present works from the ‘Amoji Masks’ series in print.

Reporting back from the Global Art Forum 2018, we look at the possibility of an emotionless future, with a round-up of ‘I AM NOT A ROBOT’. As philosopher and writer Aaron Schuster suggests, we are already managing to “create intelligent machines, machines that can learn, machines that would eventually, on some level, be self-aware, or have some kind of consciousness – machines that would have some freedom within them, and even desire. Will we not also create neurotic machines, psychotic machines, perverse machines? Will these machines not suffer from mental illnesses?”

British-Trinidadian artist, Zak Ové expresses notions of a new identity for Africa. In his work, Sky Lark – a fantastical rocket made from found-objects travelling towards a new future for Africa, and one of great promise. It reminds us of Georges Méliès’ A Trip to the Moon – currently part of the exhibition, ‘Globes: Visions of the World’, at the new Louvre Abu Dhabi – where a rocket ship lands on the moon and its occupants look back at Earth. This satirical anti-imperialist sentiment is in stark contrast to Ové’s exhibition, ‘Starliner’, which alludes to a future filled with hope and endless possibilities.

A Trip to the Moon is a satirical film directed in the early 20th century by former showman and magician, George Méliè. The one-reel film was Méliè’s 400th and most notable film – costing a small fortune and due to its popularity, was illegally copied and distributed under a variety of names (especially in the US). The film critiques the conservative scientific community of the time and is considered to be the first of the science-fiction genre. Méliè is considered a film pioneer for his development of the art of special effects and the art of film editing. He also built Europe’s first true film studio at Montreuil and began shooting films indoors in a stage-like space with artificial lighting.