in News Articles 2013
Share on facebook
Share on twitter
Share on email
Share on whatsapp
Now in its second year, the SA Taxi Foundation Art Award is an innovative competition that aims to bridge the divide between high art, contemporary culture and the vast population of South Africans using public transport daily. Now seeking entries from across the country, the SA Taxi Foundation Art Award asks artists to take their own artwork and interpret it further for a decal that will cover an entire taxi.

Khanyisa Dada, Siyaphambili Siyaphezulu, 2015. All images courtesy of the SA Taxi Foundation Art Award.
As the CSI arm of SA Taxi Finance, the SA Taxi Foundation has extensive programming which looks at transformation and development through specific programming – in this case, an art award. “There are a number of good reasons to support the arts, but as a business, ours is clear,” says Bonisile Makubalo, Director of Corporate Affairs for SA Taxi Finance; “With access to 40% of the commuter population in South Africa through our network of financed taxi owners, we see a direct way that we can impact on the art industry through exposure, while creating a unique way to promote the benefit of taxis as an advertising platform.”
The SA Taxi Foundation Art Award differs considerably from other fine art awards. Where most art competitions look exclusively at the quality of the artwork submitted, SA Taxi Foundation Art Award asks the artist to address a further brief and add a design component to their entry.
The brief this year is ‘Routes’, which speaks to the literal uses of routes to travel on, harking back to the historical trade routes of South Africa which linked us to the rest of the world but also highlighting a metaphorical reading of routes allowing for development, growth and journey.
This design component is a taxi decal design of an interpretation of the artist artwork.  Mirroring the role that creativity plays in industry, the SA Taxi Foundation Art Award asks artists to take their own artwork and interpret it further for a decal that will cover an entire taxi. “We thus aim to provide exposure for emerging artists; propagate the appreciation of art by exposing it to the general population and ultimately contribute to the enrichment of the fabric of society through this process,” says Kalnisha Singh, Director of SA Taxi Foundation. 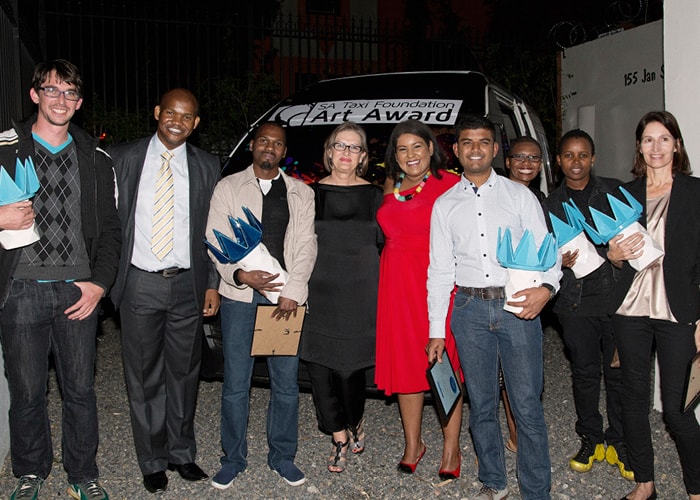 The six winners of the 2015 SA Taxi Foundation Art Award.
Six winners’ taxi decals will be produced and displayed on a fleet of 10 taxi’s per artwork,  as part of their prize. In this way the taxi becomes a movable public artwork which allows an audience outside of the traditional gallery space to engage with contemporary fine art.
Capitalising on the value which public art has brought to the general public and the creative capital it provides our city, this award challenges creatives to create ‘moving art’ as one of our 2014 judges, Dion Chang, describes. “Embedding art – and in this case, moving art – into the lives and minds of South Africans who might not otherwise be exposed to the emotive role of art, could leap frog perceptions and awareness, and that can only have positive spin offs.” says Chang.
Entries for the 2016 SA Taxi Foundation Art Award close on 15 February 2016. For more information please visit www.sataxiartaward.co.za or email artaward[at]sataxi[dot]co[dot]za