Exhibition Review: ‘The Voice of a Citizen’ by Arlene Amaler-Raviv

in News Articles 2013
Share on facebook
Share on twitter
Share on email
Share on whatsapp
Arlene Amaler-Raviv’s solo exhibition ‘The Voice of a Citizen,’ currently on show at the South African Jewish Museum (SAJM) in Cape Town, brings to mind the allegory of Plato’s cave. In this particular instance her account appears to play out the role of the anguished prisoner who has witnessed the world beyond the cave wall yet — like all those imprisoned — is unable to completely shake the shadows that circumscribe their mutual reality. 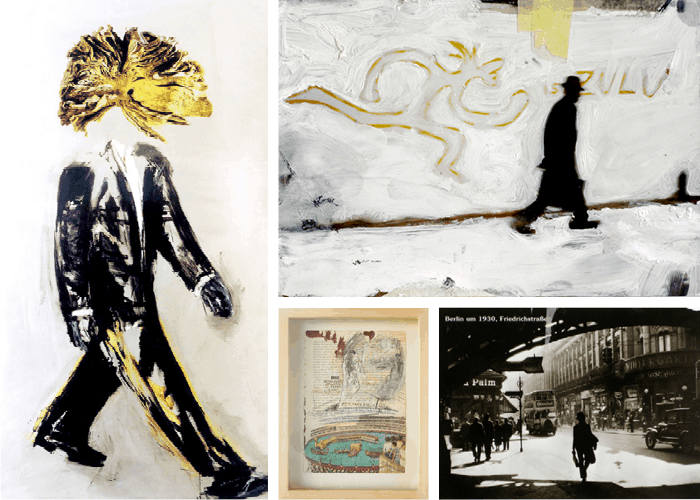 CLOCKWISE FROM LEFT: Arlene Amaler-Raviv, Address Unknown from the series ‘Politicians, businessmen and workers,’ oil and enamel on aluminium; north south east west, oil on original postcard; north south east west, oil on original postcard; part of the work, The Hamlyn Children’s History of the World, oil on paper. Images courtesy of the South African Jewish Museum.
The SAJM was once a functional synagogue (the first of its kind in South Africa). As a site of cultural preservation, the synagogue has been kept intact, supplemented by the museums extension to include a walk-through experience of what it might have been like to live in 19th century Lithuania. Connecting the two is an adjoining ramp that’s been embellished to replicate the arrival of the Jewish immigrants to the Cape, most of whom had decided to seek a new life for themselves outside of the then Russian dominated, anti-Semitic rhetoric prevalent in Lithuania. As a site that places itself at the centre of these two worlds, the South African Jewish Museum acts as a catalyst for artist Arlene Amaler-Raviv’s story, bringing the past to our doorsteps as a site for interrogation.
Her work north south east west is an assortment of ninety postcards collected throughout the artist’s life. Suspended in six groups of fifteen and mounted in glass, the images present the artist’s story as a series of interconnected events and experiences. Rather than the feelings of nostalgia usually associated with the postcard, Amaler-Raviv’s postcards have been reworked with paint, creating areas of focus and erasure that put her experience (of both time and place) at the forefront of analysis. Here, history is not locked in place for reflection but dug up and deposited in front of you, present and alive.
The postcards are displayed so that the viewer can walk around them. On one side the images and on the other the artist’s notes. Seemingly disparate, these entries give substance to the imagery, joining the dots to form a spider-web of metaphoric motif. Little events, smashed and reconstituted in order to make the unseen seen; “In 1990 in End Street downtown Johannesburg I photographed this Zulu man drawn on the wall. This beautiful REAL MAN walked into my photograph. He is the first man, my ICON.” Further down the row of imagery this ghostly figure steps out onto Friedrichstrabe in Berlin, 1930, only to disappear once more beneath newspaper clippings; images of the fort in Cape Town, the colosseum, inscriptions of dates and phrases — “I too am a civilian,” “Here I was 2011” — a circle with an ‘x’ to mark the spot.
The ease with which the artist carries this figure through her work, across borders both mental and physical, speaks as much to the malleability of the human spirit as it does to the various degrees of dislocation created by our material world – all things connected, all things in isolation. Although present, the silhouette remains intangible, the everyman, and is only ever made real through repetition. It is the persistence of memory in her work that bends time back on itself, allowing the artist to scrutinise her relation to the abstract, to speak of it as well as to it.
As indicated by the title of the exhibition ‘The Voice of a Citizen,’ Arlene Amaler-Raviv’s expression is not one of introspective self-analyses but rather a type of communication; conscious of the self as ‘citizen’ — one of many — whilst simultaneously grappling the sedimentary undertones of an individual caught within the abstract notion of the nation state. What type of voice can a single citizen have, if not that of the collective?
Born in South Africa, Arlene Amaler-Raviv received a BA Fine Art Degree from the University of the Witwatersrand where she studied under Robert Hodgins. In the 1970’s she was involved in art education, workshops, teaching and teacher training programmes. She has exhibited her work extensively throughout South Africa and internationally. In 1996 she lived in the Netherlands where she assisted in the curation of the exhibition of ‘Africa meets Africa’ at the Museum of Ethnology, Rotterdam. The exhibition at SAJM will run until 2 October 2015.