in News Articles 2013
Share on facebook
Share on twitter
Share on email
Share on whatsapp
South African photographer Mikhael Subotzky and British artist Patrick Waterhouse have won the 2015 Deustche Börse Photography Prize for their publication Ponte City, a study of the dramatic rise and fall of the iconic apartment block in Johannesburg. Others shortlisted for the prize included Nikolai Bakharev, Zanele Muholi and Viviane Sassen. Kara Blackmore explores the South African presence at this year’s Deutsche Börse Photography Prize, an accolade created for “the most significant contribution (exhibition or publication) to the medium of photography in Europe.” 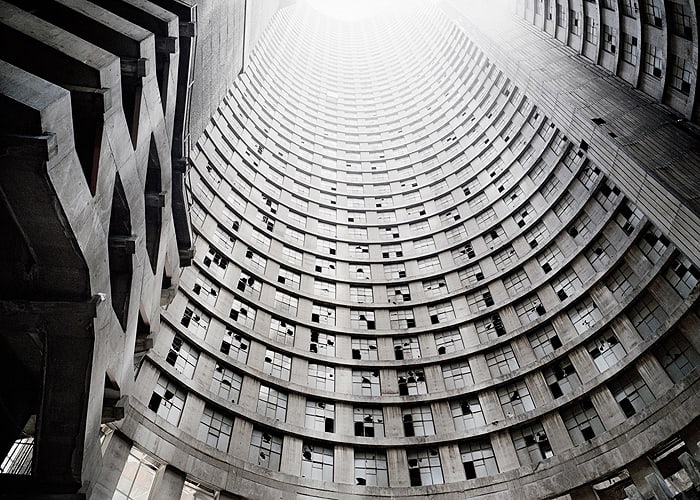 Photograph courtesy of Mikhael Subotzky & Patrick Waterhouse/Goodman Gallery
It seems that Africa still has a lot to teach Europe. For the second year in a row, images from Africa won the Deutsche Börse Photography Prize, an accolade created for “the most significant contribution (exhibition or publication) to the medium of photography in Europe.” Mikhael Subotzky and Patrick Waterhouse’s volume Ponte City presents a completely different point of view from 2014 winner Ricard Mosse’s war erotica The Enclave. Through Subotzky and Waterhouses’ methodical approach, Ponte City contextualises a daunting perspective on the lives woven into a 54-story housing complex built in 1975 by the young Rodney Grosskopff.
In the heart of Johannesburg’s Hillbrow neighbourhood, the building ascends upwards, looking towards the township of Soweto in the south and the booming business center of Santon in the north. For six years, Subotzky and Waterhouse traced the residential skyscraper’s history and investigated its myths — from inspired apartheid luxury to a clandestine refuge for those living on the margins of society; through the clean up of refuse that piled inside the cylindrical cavity, and finally trying to capture the most recent era of re-gentrification. Images of doors, windows and TV sets are presented in three four-meter light boxes, and like a photographic blueprint, the series blurs into a collective chaotic taxonomy.
At the Photographer’s Gallery show, the light-towers were paired with collected materials taken from abandoned apartments. These archives and found objects disrupt the scientific process of documentation. They tell tangential stories of past inhabitants, many of whom were immigrants or impoverished South Africans; the haste of their departure alludes that their stay in Ponte was only part of a transition to a better place. These additional materials evoke an essence of mystery with complete stories never known.
The investigation was an ambitious attempt to capture the psyche of a city inside one photographic project. In a way, the methodology allowed the possibility of dissecting the relationship between the individual, the history and the architecture. Like the tendrils of a creeping vine, the stories of those in Ponte climb up and reach out, often taking their nourishment from roots that trace from other lands. The toilet doors that had remained on the first floor still marked “European Here [gentleman]” and “European Dame” are reminders of our globalized existence. Like the other photographs that lead into a multiplicity of narratives, this ‘European’ legacy has today’s dominant population of Ponte living in opposition to the intentions for the structure, while at the same time rattling the apartheid ideology that made the allocation of ‘European’ synonymous with ‘White.’ What is Europe today anyway? 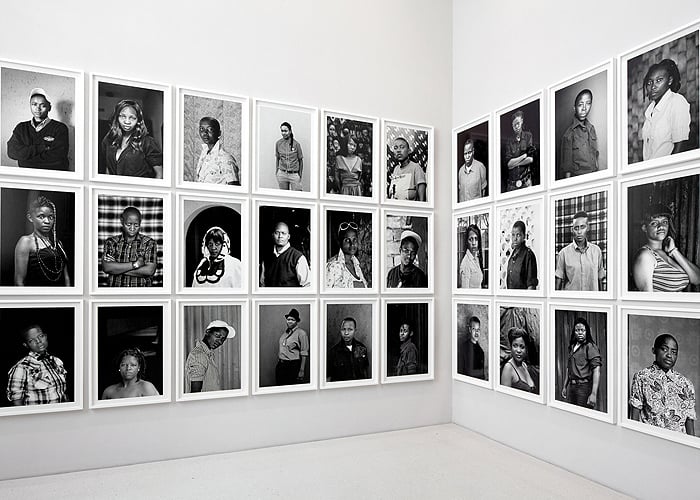 Image courtesy of Zanele Muholi/Stevenson.
Showing trauma and triumph in a more subtle way, prize finalist Zanele Muholi’s Faces and Phases 2006-2014 presents her commentary on lived dystopias of South Africa etched in the scars of curative rape or the smile-lines of matrimony. Going between the two submissions’ books or exhibitions, the voyeuristic feeling of Ponte City is replaced by a sentimental invitation into a struggle. Those seen in the series Muholi calls “highly personal and deeply political,” are openly gay, mostly black females who chose to participate as co-owners of the narrative. Through Muholi’s visual activism, they have created “a bible that would educate many people who refuse to accept the fact that we exist.”
Life-sized black and white portraits hung from floor to ceiling. Adjacent flowed a tapestry inked like a tombstone with dates and details of martyrs. On the other facing wall, a slideshow of ‘phases’ and matrimony melted slowly into the paint before bursting with another story of tenderness. Crowds lingered in the Photographer’s Gallery space to listen to a Human Rights Watch video and personal testimonies that gave resonance to the violence experienced by black lesbian, gay, bisexual, transgendered and intersexed persons (LGBTI).
Like Ponte City, the book Faces and Phases 2006-2014 strikes a balance between images and text, with poems punctuating as ‘manifestos.’ Chronicled at the end is a timeline of hate-crimes and detailed laws that support the institutionalisation of hate. By printing the legislation leftovers from colonial pasts, Muholi is linking the suffering of today’s gay black community back to the sources of systematised violence. Like a resistance archive, the mighty volume of images and stories illustrates a coming of age for equality across the world.  In Muholi’s words, the work is about “marking a South African visual history in a way that we never had, or that was never done in 21 years of democracy.”
These are indeed hefty markers of the South African experience, both publications expanding the formula of traditional photo books by providing poems, archives, and essays. The endurance of each project, from inception to date, gives a kind of continuation to reinforce the nonlinear narratives and unprecedented intimacies. In this way, the photographers are continuing to challenge what Okwui Enwenzor has referred to as  “photographic uses of Afro-pessimism to perpetuate a uniform, fixed and singular approach to the study of Africa.” By winning the prize and being featured as a finalist, Ponte City and Faces and Phases respectively capture an arc of dramas inside a matrix of contemporary realities. As such, they prove that although Africa still has its problems, the people have context and agency that reaches beyond the Afro-pessimistic sound bites of victimhood.

Kara Blackmore is a cultural heritage consultant based in Kampala, Uganda. As a trained anthropologist and museum curator, she works with rural communities, artists and primary owners of heritage to curate war memorials as well as exhibitions based around social dialogue and archive production.