‘Filming But Drowning’: Gordon Glyn-Jones In Conversation with Gideon Mendel

in News Articles 2013
Share on facebook
Share on twitter
Share on email
Share on whatsapp
In the coffee-table-canon of revered South African photographers, a few names regularly float to the surface: Goldblatt, Mthethwa, Oberholzer and so on. With the international recognition for his series ‘Drowning World,’ Gideon Mendel finally edges into their ranks. This year he’s been Shortlisted for the Prix Pictet, won the Jackson Pollock Award and Axis Gallery will host a solo show of his work at 1:54 London. Gordon Glyn-Jones discusses Mendel’s ‘Drowning World’ and his new series ‘Watermarks’ which breathes new life into flood damaged photographs. 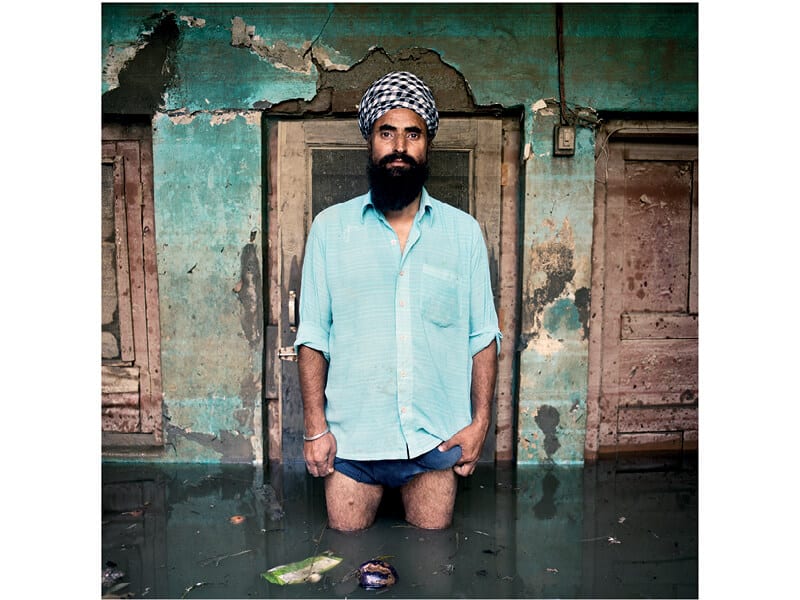 Gideon Mendel, detail of J.B. Singh, Jawahar Nagar, Srinagar, Kashmir, India. October 2014. All images courtesy of the artist.
In photographic critique, each discipline traditionally has its own rules: ‘documentarists don’t influence outcomes;’ ‘true art photographers avoid pushing one agenda too heavily.’ However, London-based Gideon Mendel has made a career of knitting the lines between documentarist, portraitist, activist and more recently, archivist, curator, and even abstract expressionist.
“I cut my teeth as a young ‘struggle photographer’ in South Africa in the 80s and in some ways we were very lucky,” he asserts. “There was no moral ambiguity, all we had to do was turn up and record what was happening and our consciences were clear.” Since then, he has gone from documenter to longtime crusader. In addition to his activist work on global warming, Mendel has been deeply involved with the Treatment Action Campaign and the battle for the disambiguation of treatment, particularly in Africa. “It’s been said that my work on HIV and AIDS was the end of me as a photojournalist. I lost any kind of objectivity and became committed to that particular fight. I also found the black and white photojournalistic style no longer worked as an activist’s tool and thus I transitioned to colour in 2000.”
To some extent, he began directing the narrative and locations rather than simply being there to capture the moment. Thus he subtly created his own unique space, straddling photojournalism, activism and art. “For a long time, people and galleries struggled with my work because it was difficult to pigeonhole,” he reflects. “Increasingly I am attracted to the complexity of narrative and ideas which work in an art context; I am not ashamed of that. I also vigorously interpose the images where they can impact and affect change; a recent example would be twenty large billboards erected by Artists4ClimateParis2015 in protest at the Paris Climate Change Conference (COP21). I don’t feel the need to turn my back on one area to be more effective in another.” 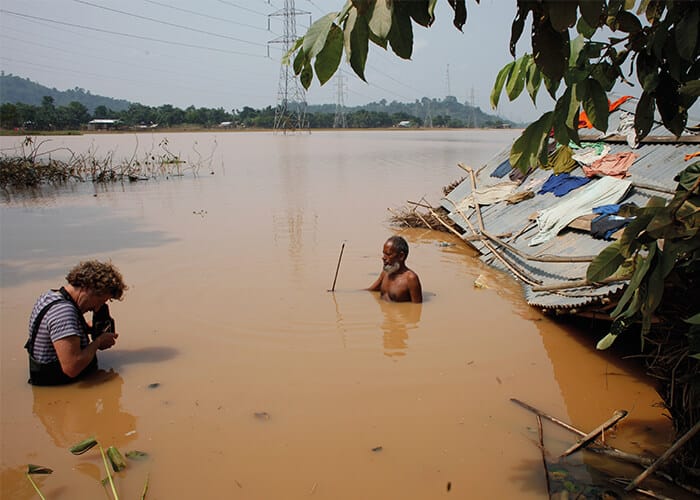 Gideon Mendel at work, Assam, India, October 2014. Photograph: Ravi Mishra.
For the ‘Drowning World’ project, Mendel travelled to a range of countries in the aftermath of devastating floods. His portraits, which often feature people waist-deep in water, have a peculiar stillness to them; whilst the subject’s worlds have turned into a dystopian hell, they gaze out sedately as if posing for a traditional portrait. It’s this mildly interrogative gaze that draws you in, rather than what, in less subtle hands, might become some archetype of suffering.
It was whilst working on this project that Mendel discovered the DNA of ‘Watermarks,’ which throws curator, archivist and (some might say) even abstractexpressionist into the mix. For this series, he has discovered that in the aftermath of floods, many uniquely personal snapshots are discarded, considered ruined. Mendel saves them, makes scans and reprints them large on textured archival paper. The resulting images are enflamed with colour and painterly texture, but leave a trace of the original snapshot to anchor the backstory and remind us of what they once were. In the large printed versions, the tension between the two delivers a memorable, visceral punch.
“I was shooting in Haiti (in 2008) and the town of Gonaïves was cut off, so we were flown in on a UN helicopter. I use oldfashioned Roliflexes and by some cruel lick of fate both my cameras went into the water that day. I dried out the cameras and tried to shoot again, but the humidity in the lens had affected the film. When I processed it, the results were really quite interesting. There was something poignant in that moment; in a minor way the flood had punished me, but also offered the promise of something renewed and special as well.”
Then one day, after a massive clean-up in Australia, he noticed a pile of discarded photos and saw similar effects to those he’d noticed on the film. He went home, scanned and printed some of them in large format and realised how powerful they were.
“The challenge, of course, is that I am no longer the photographer, so where does that leave me? On some level it’s about letting go of that control. It’s completely different from editing photographs; I find the images quite moving and emotional. Even the process of going from scan to blowup is quite a revelation, I see more and more.” 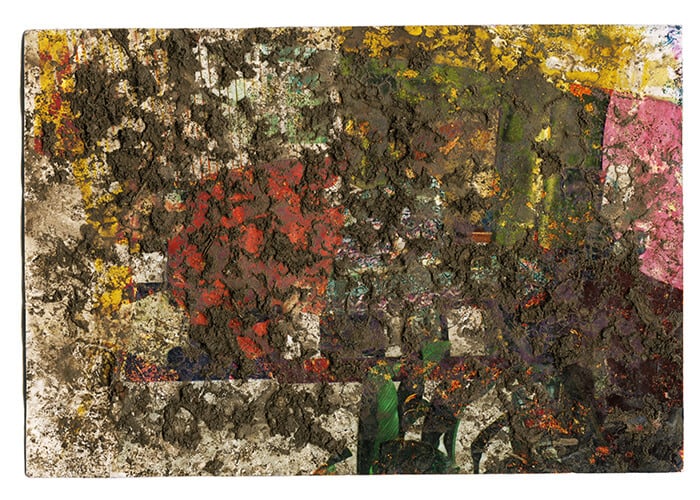 Gideon Mendel, detail of Found on Goburra Street in Rocklea (9), Brisbane, Queensland, Australia, January 2011.
Another issue is the provenance. The photographs are mostly set to be thrown away, so they are given another life in some sense. However, he still has to consider permissions and consent. Mendel has bonded with the owners of some of the photographs, like the graduation shot of the young girl in Colombia who he met whilst photographing in her home. He helped her save some of her other photographs, but it was in fact a neighbour who overheard what they were doing and supplied the graduation shot.
“People look at my website on their phones and it self-perpetuates, but basically if I am in contact with the people, then the images are returned and permissions sought. Otherwise I label them as ‘found objects’ and they remain anonymous.”
On the one hand, it is easy to get caught up in the heady power of the images, but equally as effective is the fact that before the tragedy they were simply part of people’s lives, now washed away, which gives them a bifurcated emotional edge. “It’s an archaeology of memory, a loss of personal and community memory as a result of flooding and climate change,” says Mendel. “It reflects on the threat of the loss of these precious memories; it does record a moment, a significant moment of some sort.”
One of the most compelling and profound aspects of Mendel’s oeuvre is that his projects are sustained for years and years (he has worked on the subject of HIV for eighteen years). Although the ‘Watermarks’ series is a curatorial challenge within a gallery context, he continues to travel around the world capturing the ‘Drowning World’ victims. He has evolved his own unique video language in the ‘Water Chapters’ series, which introduces sounds and context that are missing in the ‘Drowning World’ portraits. He has plans to build a large, new five-screen video installation to simultaneously show ‘Water Chapters’ with ‘Drowning World’ at the Broad Art Museum at Michigan State University in October.
I finally asked Mendel what sustains his interest for such long periods. What continues to draw him back to the water?
“There’s something about the colour and the light, and the fact that things aren’t the way they are meant to be. I find it a very compelling place to photograph, standing in the water with these people. Each new one I film deepens the project and deepens my understanding of what’s actually happening.” 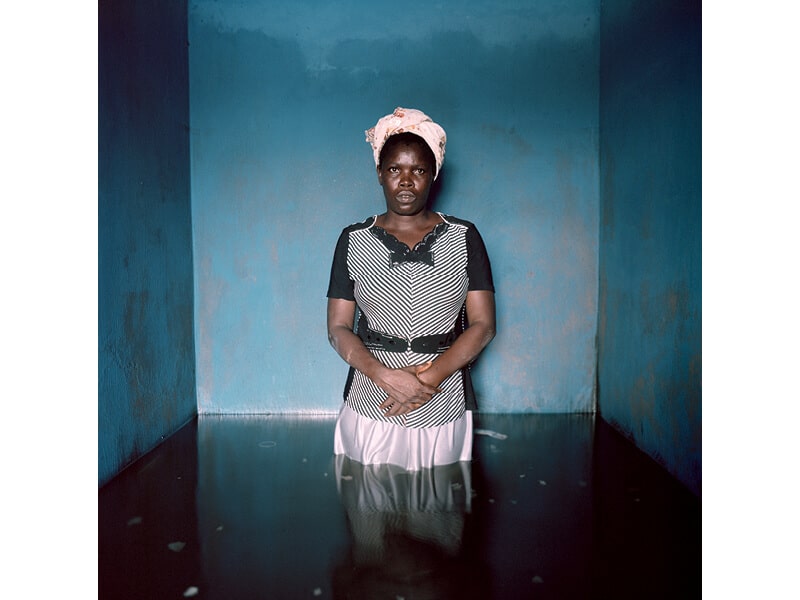 Gideon Mendel, detail of Florence Abraham, Igbogene, Bayelsa State, Nigeria. November 2012.
Info and forthcoming exhibitions:
Broad Museum, Michigan State University: 14 May – 16 October 2016
Axis Gallery at 1:54 London, October 2016 – Estuary Festival, The Thames Estuary: 17 September – 2 October 2016
‘Drowning World’ will show at the Wits Art Museum (WAM) in October 2017. This will be the first time that the work will be seen in South Africa.
Gordon Glyn-Jones is an artist and writer who lives and works in London. He is a passionate advocate in the growth of Southern African and diaspora art globally. (www gordonglynjones.com)