in News Articles 2013
Share on facebook
Share on twitter
Share on email
Share on whatsapp
First Thursdays, the highly popular event that takes place in the CBDs of Cape Town and Johannesburg on the first Thursday of every month, is taking place tonight (6 August 2015)! Galleries and shops in the vibrant urban areas of two of South Africa’s biggest cities will be open until late for the first First Thursdays programme. Have a look at some of ARTsouthAFRICA’s highlights. 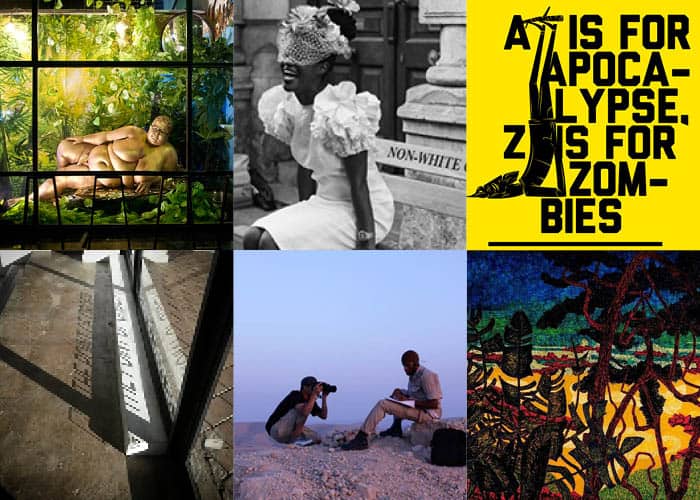 CLOCKWISE FROM TOP LEFT: Images from Fourthwall Books, 99 Loop Gallery, Kalashnikov Gallery, EBONY, District Six Homecoming Centre and The Point of Order Gallery.
CAPE TOWN HIGHLIGHTS
1. 99 Loop Gallery: Opening group exhibition ‘Cape of Good Hope’
99 Loop will open its doors with a group exhibition that is a nod to its surroundings – the city of Cape Town itself. Stemming from the idea that making a mark on canvas is akin to moving across a landscape, the artists included in the ‘Cape of Good Hope’ have explored different aspects of the city through their work – historical, personal, geographical or architectural.
This group show includes works by Fayrooz Abader, Andrew Hart Adler, Chris Auret, Thomas Cartwright, Rayaan Cassiem, Michael Chandler, Katrine Claassens, Adriaan Diedericks, Robert Hamblin, Daya Heller, Lizza Littlewort, Johson Tsoku Maela, Jenny Parsons, Khaya Sineyile & Karen Wykerd
About
99 Loop is Cape Town’s newest gallery. Located in the historic heart of the city, 99 Loop shines a spotlight on a wide range of top emerging and established artistic talent.
Location
99 Loop Street (Cnr Church and Loop Streets)
2. EBONY: ‘MODERN MASTERS’ (6 August – 1 September 2015)
A group exhibition of works by Walter Battiss, Jack Heath, Jacobus Hendrik Pierneef, Erik Laubscher, George Diederick During, Deborah Bell, Simon Stone and Norman Catherine amongst others.
Gallery
Marc Stanes is the curator for EBONY’s noted fine art collection. He sources classic and contemporary artworks by some of South Africa’s most coveted and collectible artists. The collection spans a wide spectrum of price and mediums.
Location
67 Loop Street
3. District Six Homecoming Centre: African World Documentary Film Festival Screenings
PROGRAMME:
18h10 – 18h20
DIRTY HANDS / John Goheen
In many African countries garbage is an ever increasing problem. In Uganda’s largest city, Kampala, roughly 800 tons of trash is generated each day. With limited government programs to deal with trash, some enterprising citizens have taken to the streets with profitable solutions in some unexpected ways. (8mins)
18h20 – 18h55
MAESTRA / Catherine Murphy
Cuba, 1961: 250,000 volunteers taught 700,000 people to read and write in one year. 100,000 of the teachers were under 18 years old. Over half were women. The documentary explores this story through the personal testimonies of the young women who went out to teach literacy in rural communities across the island – and found themselves deeply transformed in the process. (33 mins)
18h55 – 19h20: BREAK
19h20 – 19h30
NOISE RUNS / Kim Baba, Ashley Panzera
In the aftermath of the 2010 Haiti earthquake, failed reconstruction has pushed social unrest to the breaking point. Protests erupt in the streets, and armed UN soldiers stalk the angry crowds. But a group of young Haitians, driven by their passion for a new Haiti, is sparking social change. To democratize information and offer hope to the population, they produce a radical newspaper, Bri Kouri Nouvèl Gaye (Noise Travels, News Spreads). The documentary follows this team of idealistic citizen journalists as they confront the problems that NGOs and government could not solve. (18mins)
19h30 – 20h40
VILLAGE OF PEACE / Ben Schuder, Nicholas Philipides
‘The Village of Peace’ reveals the untold story of the African Hebrew Israelites, an incredible group originally from Chicago, now thriving in the Israeli desert. The stories and perspectives of four Village members are woven together to illustrate a place unlike any other; a community enlightened by ancient scripture and determined to prioritize ‘life’ in its purest form. Although the community is growing in numbers, recent immersion into the Israeli Army leaves the youth susceptible to outside influences. Ultimately we learn about the struggle to preserve the African Hebrew culture, and the challenges of passing their traditions to future generations. (68 mins)
About
Located on the edge of District Six, we opened our doors in 1994 as the first community museum in South Africa.We reflect the history of the community that lived and worked in this part of the city.
Location
15 Buitenkant Street (Cnr Caledon)
4. Youngblood Gallery:
This month Youngblood’s exhibition will be graphic and unusual; featuring works by winner of the 2014 Design Award for Photography and Photo Manipulation, Chris Slabber, intricate designs by Juanita Oosthuizen and a Cyborgian trans(per)formance Installation by award-winning Namibian artist, Erik Schnack
Faye & Wren is an alternative folk group consisting of singer-songwriter-duo – Wren Hinds (Hinds Brothers Band) & ambient songstress Faye Oakes.
Gallery
Youngblood is an Arts & Culture foundation that aims to be a platform for artists. Based in a 3 storey gallery with an in-house restaurant, here you can experience all facets of the arts in one space.
Location
70-72 Bree Street
5. The Book Lounge: Book Launch, ‘On the Postcolony’ by Achille Mbembe
First published in 2001, Achille Mbembe’s landmark book, ‘On the Postcolony,’ continues to renew our understanding of power and subjectivity in Africa. This edition has been updated with a foreword by professor of African Literature, Isabel Hofmeyr, and a preface by the author.
In a series of provocative essays, Mbembe contests diehard Africanist and nativist perspectives as well as some of the key assumptions of postcolonial theory. Through his provocation, the “banality of power,” Mbembe reinterprets the meanings of death, utopia and the divine libido as part of the new theoretical perspectives he offers on the constitution of power in Africa. He works with the complex registers of bodily subjectivity — violence, wonder and laughter — to contest categories of oppression and resistance, autonomy and subjection, and state and civil society that marked the social theory of the late twentieth century.
‘On the Postcolony,’ like Frantz Fanon’s ‘Black Skins, White Masks,’ will remain a text of profound importance in the discourse of anti-colonial and anti-imperial struggles. Mbembe will be in conversation with Ntone Edjabe and Ashraf Jamal.
About
The Book Lounge is an independent bookshop in the heart of Cape Town. Passionate staff, great coffee and fantastic books.
Location
71 Roeland Street (Cnr Buitenkant)

ABOVE: Work by Namibian artist, Erik Schnack. Image courtesy of the artist.
JOHANNESBURG HIGHLIGHTS
1. Fourthwall Books: First Thursdays at Fourthwall Books
‘Another Window’: a conversation between poet Phillippaa Yaa de Villiers and artist Dean Hutton. Phillippa and Dean will explore the terrain between image and word with particular reference to the theme ‘(un)grateful’. Expect poetry by Phillippa and a video work by Dean.
About
Fourthwall Books – publisher of art and artist books, photography books, and books on architecture and the city (Johannesburg in particular).
Location
Reserve Street, Braamfontein.
2. The Point of Order: ‘A Watershed Moment’
‘A Watershed Moment’ is the title of the 2015 Martienssen Award. For the first time the award will take place at The Point of Order, the newly launched gallery space of the Division of Visual Art at the Wits School of Arts. The gallery’s proximity at the bottom of the Noswall Hall building has inspired the brief given to students, which, although left open, points towards recognizing the role of education and its relationship with human energies, life-experiences and institutions surrounding the gallery space.
Students’ proposals were encouraged to point towards possibilities of what education can be, that is, not education as a response to a crisis or present political realities but rather a space to produce these so that many others outside of the boundaries of academia can see themselves and find ways to ‘participate’, engage and even to deviate.
About
The Point of Order (TPO) is an experimental project space managed under the auspices of the exhibitions programme – Division of Visual Arts at the Wits School of Arts, University of the Witwatersrand.
Location
Cnr Bertha & Stiemens Streets, Braamfontein
3. Kalashnikov Gallery: ‘A is for Apocalypse. Z is for Zombies’
Words by Jaco van der Merwe. Pictures by Louis Minnaar. From 6.30pm.
About
Kalashnikovv is a contemporary fine art gallery,consultancy and project space which is dedicated to providing support to both emerging and established South African artists.
Location
153 Smit Street

ABOVE: The Kalashnikovv Gallery, Johannesburg.