‘Flux: In the Name of the Game’ By Valerie Kabov

in AFRICAN ART, ART FAIRS, COLLECTING, CONTEMPORARY ART, CROSS CONTINENTAL, EXHIBITIONS, IDENTITY, VISUAL CULTURE
Share on facebook
Share on twitter
Share on email
Share on whatsapp
The coming six months will perhaps be some of the most interesting and testing times in the story of African contemporary art and its international market engagement. From September 2016 to February 2017, there will be eight art fairs dedicated to African art, three of which will be first editions (Art X Lagos, AKAA and Accra Contemporary) and five of which will be on the continent (FNB Joburg Art Fair, Art X Lagos, Accra Contemporary, Cape Town Art Fair and the ART AFRICA Fair), as well as the already established 1:54, London. The expansion of market events in the African contemporary art scene appears a sensible progression from the enormous attention that African contemporary art has received over the past three to four years. However, to treat the current status quo as a fait accomplis, without analysing the broader historical context and current international market trends beyond the niche, would be a mistake. 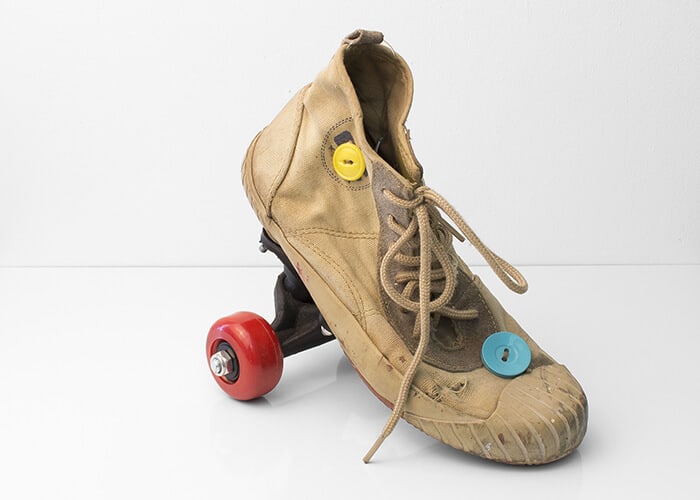 The role of several decades of curatorial and artistic activism underpinning the international interest in art on the continent is well understood and acknowledged. The current limelight would not have been possible without the relentless vision of people like Simon Njami, both with Revue Noire and seminal impact of exhibitions like ‘Africa Remix’; Okwui Enwezor and Salah Hassan’s work on nka journal and projects like Forum for African Art, curated by Hassan with Olu Oguibe; as well as decades of work by galleries like October Gallery and the tireless commitment of African artists.
While these efforts are part and parcel of art history, global art market history parses a broader spectrum of information and requires a more expansive reflection on the factors which coalesced to create the rise of African contemporary art as we see it today. In doing so, we need to acknowledge that in addition to the concerted efforts of African art stakeholders, there were elements of synchronicity and serendipity in the timing of curatorial efforts, as far as the market was concerned. Prominent among these are three market specific phenomena.
The timing could not have been more fortuitous because it coincided with the exponential growth and changing nature of art fairs as the key sales vehicle of the international art market, which has seen the number of art fairs grow from 68 in 2005 to 189 in 2011 and 278 listed in The Art Newspaper calendar for 2014. The nexus between curatorial and institutional vehicles like the Venice Biennale and the art market having become more conspicuous have provided the facility to leverage and monetise the exposure and growth of African artists. The rapid expansion of art fairs created broader channels and access to market for new art, which became crucial for galleries working with African artists to increase their engagement and reach. 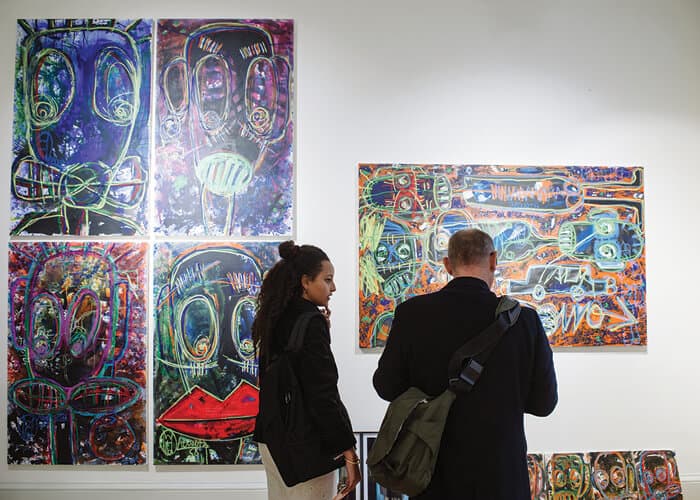 The pace of synergies accelerated in 2013 when Art Dubai selected Bisi Silva to profile West Africa in its Marker section. In the same year, the Angola Pavilion – curated by Paula Nascimento – won the Golden Lion at the 2013 Venice Biennale. Founded by Touria El Glaoui, 1:54 Contemporary African Art Fair was launched in London. Curated by Okwui Enwezor, the 2015 Venice Biennale featured a record number of African artists, followed by a massive PR onslaught accompanying the ‘Africa Focus’ section at The Armory Show in New York in March 2016. All of this appears to be unconditional proof that African art has arrived, both critically and commercially.
The second market factor we need to acknowledge is the recent escalation of hype and enthusiasm for emerging contemporary art in the international market. This excitement has resulted in artists aged thirty and younger, achieving astounding price growth of up to 1500% a year and attracting to contemporary art a class of speculative collectors. The number of collectors in the market and the number of collectors with a financial interest in acquiring art is also expanding. The interest in young art was a perfect fit for art on the continent, dominated by emerging artists and representative of the continent where more than fifty percent of the population are below thirty.
Finally, it is important to recognise that the market interest in African art is part of a progression of spotlights on underpriced and underexposed regions of the world with emerging economies or simply underpriced segments of the market, which can create rapid price growth opportunities, attractive to investment focused collectors. Over the past couple of decades a number of countries have been the beneficiaries of international art market fads. Among them are China, India, Brazil, Russia (aka BRIC) and as surely as the market moved on from them, it will move on from Africa.
As we speak, all three of the key market positions, which bolstered the rise of African contemporary art are shifting, and have been doing so over the past twelve months. The saturation of the global art fairs calendar and the inability of collectors and galleries to physically attend and to grow in line with the number of events is leading to serious competition. There is concern that this may lead to closure of some fairs and the absorption of others into large brands like Art Basel and Frieze. In 2014, the Art Newspaper calendar listed 278 art fairs but in 2015 that number fell to 269. 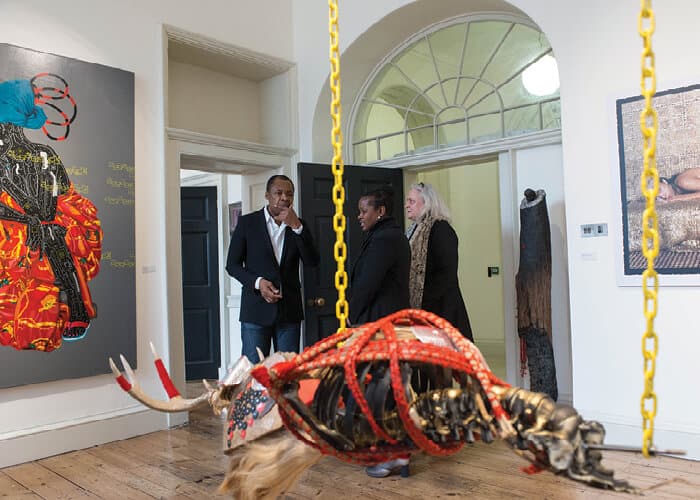 “One is that the global enthusiasm and expansion of art fairs is at an end. “Well, the heyday of art fairs seems to be over,” Skate’s Art Market Research proclaimed on Jan. 19, reporting that 1, 032, 792 people attended the world’s top 20 art fairs in 2014, a 7.4 percent decline from the previous year.”
Simultaneously the market obsession with emerging artists is over. “The art world’s obsession with youth may be fading,” reported W magazine in May 2015, “With prices for even facile works by emerging talents accelerating at warp speed, collectors hunting for greater substance are turning to artists who are pushing eighty, and counting.” This sentiment was shared by Christian Viveros-Fauné in an article published by Artnet, in which he writes; “Forgotten artists have become the art world’s hot new go-to commodities.” The move away from emerging art proved justified with prices for over-hyped young stars of the art scene plummeting amid scandals involving notorious flippers like Stefan Simchowitz, who in 2015 was notably embroiled in a court case with a leading nascent star of African contemporary art, the 29 year old, Ibrahim Mahama.
There are several reasons for this. One is the inevitable growing sophistication and erudition of the collectors, who having entered the market, are now recognizing the value of consistent careers and a degree of quality that many young artists are not able to deliver. Additionally the economic downturn driven by the Chinese recession and resource demand decline in 2014/2015 has had a significant impact on the art market in 2015 and 2016. Recent political events like Brexit in June 2016, have also introduced uncertainty and currency fluctuations, to which the art market has responded, immediately. 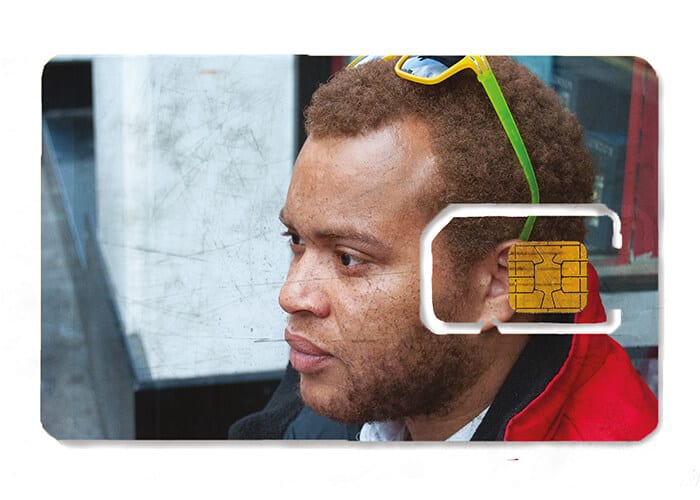 The mood from Art Basel in June 2016 has been of a marked shift away from emerging contemporary art towards established and modern artists. The term “store of value” became the buzzword of the fair, with the pound’s drop post Brexit making works by recognised, established, re-sellable artists a better bet than cash in a fluctuating currency climate. “This year, dealers showed a volume of modern art unseen at an Art Basel show for at least a decade. I remember about five years ago, we had the problem that everyone in the modern section of the fair tried to show contemporary art and got scolded for that,” said Mathias Rastorfer of Galerie Gmurzynska. “Now we have the reversal of that problem.”
So what does it all mean for African contemporary art? BRICS (The S in BRICS stands for South Africa, the later addition to the acronym) countries provide an instructive example of what it takes to survive the vagaries of the international art market. Unambiguously, in every case it is a culture and a history of supporting art both at government and collector level, which help make sure that the shift of the spotlight – while significant – does not sabotage the viability of their art scenes. The same can be said about the recent rise of Middle-Eastern art, again an emerging art scene with very strong local support. 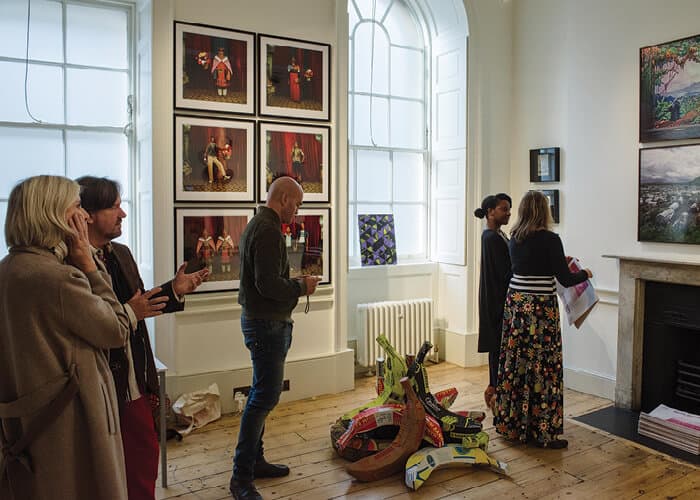 African contemporary art however is in a somewhat different situation. Sober assessment indicates that we are a sector with a very large emphasis on emerging art at a time of shifting focus towards older artists, introducing new art fair projects at a time of art fair consolidation and contraction globally. New galleries (especially internationally) drawn to working with African artists, buoyed by the excited headlines in Wall Street Journal and Financial Times, at a time of an economic and political instability. Moreover these developments are taking place in the context of very young and under-established art sector infrastructures which are only just germinating collector culture across the continent and an untested collector pool internationally. The international expansion of the sector has been significantly fuelled by support from outside the continent, both in terms of collectors and production funding (philanthropic and NGO), with NGO support declining over the past few years due to the recession and austerity measures in Europe and elsewhere. This means that the stakeholders, especially the more recent and under-established ones, are less able to weather the fluctuations of the international market than those in other market niches. Speaking at Art Basel’s Salon panel discussion in June, Joost Bosland, the director of Stevenson Gallery, the most established international gallery on the continent, was at pains to emphasise that while the recent recognition and visibility for African contemporary art is important in historical terms, it is not at present reflected at all symmetrically in economic terms.
Long term health of the art sectors on the continent requires stakeholders to move past giddy enthusiasm towards steadfast and strategic preparedness for vicissitudes of the market, financially and structurally. For most African players, their domestic art sectors are just at the start of this journey toward sustainability. In this they are at a distinct disadvantage, compared to their counterparts around the world, who are working with African artists, whether to take advantage of the fad or otherwise. Many of these are able mitigate risk by focusing on other non-African and more established artists in their stables and have access to institutional collectors, something that is more than likely not within reach of African galleries and art promoters.
Many of the most successful African artists, who managed to become established critically, commercially and institutionally over the past several years, are represented by galleries outside the continent. In such cases the financial stability their success could afford to African art sectors is diverted to those far more able to weather any storm. There are a lot of gifted, passionate and dedicated players in African contemporary art, committed to building and ensuring its critical and economic success, not just for international consumption but even more importantly as custodians of culture on the continent. This is the kind of dedication and perseverance which will be required to prevail in the current testing times.
This article was first published in the September 2016 edition of ART AFRICA magazine, entitled ‘BEYOND FAIR.’