A masterful display of contemporary art from around Africa and the diaspora attracts record visitors to the 7th Edition of the FNB JoburgArtFair. Strong sales were reported from galleries, with extremely positive feedback from museum representatives and private collectors from all over the world.

26 August, 2014: Johannesburg, South Africa: The 7th Edition closed on Sunday 24 August after welcoming 9,500 visitors, including scores of school groups and museum representatives from international institutions, including Zeitz MOCAA, Centre Pompidou, CCA,Lagos, Tate and the Yorkshire Sculpture Park. Once again the FNB JoburgArtFair has established its position as the leading African art fair.

Since its inception in 2008, the Fair has set out to display the finest and significant modern and contemporary works from Africa and the diaspora. Across its sections – Established Galleries, Young Galleries, Art Platforms and Special Projects – the 7th edition welcomed 37 exhibitors from 8 countries exhibiting works from over 400 artists. 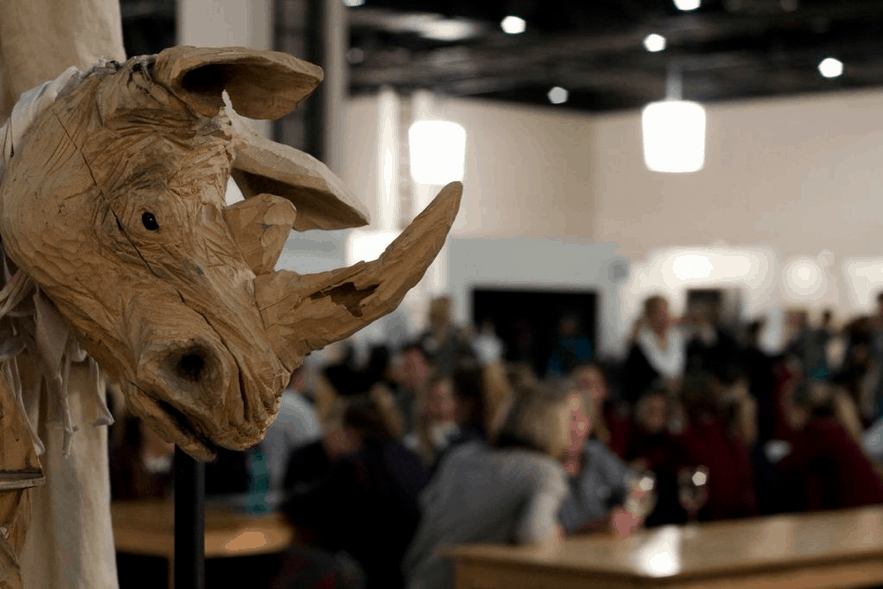 “We are proud to be associated with an event of this calibre and magnitude and are delighted that through our commitment we provide a platform for artists to showcase their talent” says Bernice Samuels FNB Chief Marketing Officer.

The fair director, Ross Douglas, noted on this year’s edition: ”We have achieved an increase of 10-20% in our visitor numbers and sales, which has been a spike in our relatively consistent growth from year one. We put this continuation of growth down to the changing demographic of our audiences.

The appetite for contemporary art is developing across South Africa and the Continent alike. We have a nice opportunity with our audience, as many are new buyers. Johannesburg is the buzzing economic capital of Africa, and this attracts African nationals from the 54 Countries to the Fair.

We have always wanted this Fair to be accessible to the wider audience, and therefore as much as the focus of the Fair is on art, we also build the fair around a central area with great food and drinks. People come, hang out, meet and discuss art and life. The idea is to show that art and collecting don’t have to be just for the super- rich, but that living with art and being part of the contemporary cultural movement on the Continent is a lifestyle accessible to all.

We have spent the last year travelling the Continent meeting and broadening our network of galleries, artists and buyers, especially in Lagos that has a synergy with Joburg, being one of Africa’s biggest economies with a young population. These relationships are really paying off now, as was evident this weekend: this Fair shows pan-African art to local, national and international buyers and it’s working.”

“The overall quality of the artworks at the Art Fair this year was better than previous years. I believe that solo presentations of artists by the smaller galleries were instrumental in ensuring this. The overall design of the fair was good.

The FNB JoburgArtFair has become an important platform for showcasing African art from the continent as well as exposing a broad South African audience to contemporary art.”

Joost Bosland from the Stevenson Gallery commented on collectors at the Fair:

”Joburg has more serious collectors now that at any point in history, and I think thiswas evident at the fair. We sold four major Wim Botha pieces, three of which arestaying in Joburg, and most of the works by Portia Zvavahera were bought by localsas well. It was a wonderful fair for us.”

This year’s edition also saw a special focus on Nigerian contemporary art and celebrated this with round table discussions, invited curators and the addition of two new exhibitors from Lagos, Nigeria namely, Red Door and Art Twenty One.

Oliver Enwonwu, founder of Omenka Magazine and director of Omenka Gallery from Lagos had this to say: “I’m very happy to be part of the Joburg Art Fair. This was my sixth time participating and it was a very rewarding experience. This year, I really felt as though there was a pan-African feel as opposed to previous years when you saw mainly South African galleries. I was personally very happy because there was a special focus on Nigeria, it just shows that the organisers of the the Fair are very forward thinking; exposing African art to new audiences. I spoke to a lot of exhibitors who were extremely happy with the event and people sold very well. I wish the organisers of the Fair all the best.”

Caline Chagoury, Executive Director of Art Twenty One, first time exhibitor from Lagos, said: “First time in South Africa, first time with the Fair, best first experience. We were so well received by the gallery community and visitors with such positive reactions to our artists that we can’t wait for the next one. We had interest from not only South African collectors but American, Italian and French. Even Nigerians that were new to us.”

This year’s edition also saw an extended VIP program with visits to private viewings in collectors’ homes, including those of fashion designer Marianne Fassler and Artlogic director Ross Douglas, as well as a private screening of Emile Stipp’s famed video art collection at the Bioscope.

The Talks programme brought together prominent voices from across the African diaspora and art world, including: Raimi Gbadimosi, Kendell Geers, Simon Njami and Prince Yemisi Shyllon.

Usha Seejaram organiser of three talks on the programme had this to say:

“Many audience members came to personally thank us for having these talks as they have enjoyed them substantially. The talks have been very well received, they compliment the artwork exhibited at the fair and function as a space to critically engage with the issues surrounding contemporary art. The variety of topics and speakers appealed to a wide spectrum of audience and have provided an opportunity for a different kind of inspiration.”

Artist Roger Ballen, who had a book signing of Asylum of the Birds at the Jacana stand at the Fair noted: “The Fair more than any other event that I have been to in South Africa echoes the diversity and aesthetic of art in this country. I look forward to attending this event every year as it allows me to reflect on the range of art being created and sold.”

The Fair was well attended by international collectors, with large contingents visiting from the US and Europe, providing local artists with valuable international exposure.

London based collector Christian Sulger-Buel added: “It was always my intention to come to the fair, but the invitation to be part of the VIP programme added another dimension, seeing the breadth of the ‘Joburg Art Week’, which was very interesting. The fair was well organised, structured, relaxed enough and not stiff, with reasonable prices. I was introduced to a group of artists and galleries from whom I plan to acquire. I observed a symbiosis between the visitors and artists. It was sophisticated, but with people bringing their families with large school groups attending. I believeart is for sharing and this was seen here. I will be returning next year and I will buy again.”

Thembinkosi Goniwe, curator of Special Project, Dialogues with Masters: Visual Perspectives on Twenty Years of Democracy, presented by Grolsch, said: “There was a lot of interest to the works we were showing, with many asking for a second phase of the project. Outside of my booth the fair was well put together, good quality control and it was great to see the performance elements taking place also. It’s an achievement for all of us.”

On sponsoring the Dialogues with Masters, Grolsch Marketing Director Vika Shipalana commented:
“Grolsch’s participation in the FNB JoburgArtFair was an extremely rewarding experience for us. From the Special Project we supported, Dialogues with Masters, which featured 10 emerging artists reinterpreting iconic works of the South African masters, to being able to host an interesting group of art-lovers and influencers at the Art Fair events, we were able to make some important connections and share our beer with an audience that is as engaged with art, creativity and craftsmanship as Grolsch is. We look forward to taking the relationship forward.”

The FNB JoburgArtFair was founded as the first art fair on the African continent. From the beginning, Artlogic has set out to bring together the best of contemporary art from Africa, and to create a platform for dialogue and exchange on which the continent’s artists, curators, collectors, writers and art lovers can congregate.

The FNB JoburgArtFair is an Artlogic event and generously supported by First National Bank, the oldest bank in South Africa.


Images from the event

The full list of participating galleries is available below: