Presented by SMITH, Grace Cross will be exhibiting a Solo Project at the FNB JoburgArtFair 2016. ART AFRICA caught up with Cross to find out more about the artist and the body of work on show.

ART AFRICA: You were born in Zimbabwe, yet grew up in India, America and South Africa. How do you believe this experience informs your art?

Grace Cross: The cultural nomadism I experienced growing up informed my cultural identity and the art I am interested in making today. I embody many of the past histories of the places I have lived, as well as my family’s, which includes Greek pharmacists, Dutch vaudeville minstrels, Zambian farmers, snake charmers and clairvoyant Boer matriarchs, to name a few.

I enter the world by having swallowed many worlds already. My history, passed down through my Southern African ancestry, is one of extraction and insertion into history. But that history, has been written as a terra nullis discourse, as an inscription upon a blank slate, told through the voice of the conqueror. I am interested in mining my personal and inherited past to look for the potential of an impossible, mythical, alternative space, which can reach through time to reconfigure the past in the present. My personal narrative is that of the foreigner; and as a foreigner I use my art practice as grounds for reconstructing my cultural home, by trying on multiple masks and false selves, simultaneously true nor false.

Your work provides a kind of melting pot of cross-cultural and historical reference, “ordered to reveal only part of a story,” yet it is often the other, silent part that speaks loudest. What is the purpose of this ambiguity?

My paintings nurture that ambiguity to suspend any perceived notions of reality as myth construction. We are all handed down a mythological story, through the terror and the horrors of colonialism and modern industry and this history, so little linked to truth, is a constructed archive of carefully chosen stories that exclude, omit and repress. My work conjures deep history to bring transformative cultural wisdoms, and materials together to erode and excavate those stories for reanimation from our present moment. I approach image making, as a means of reanimating stories read against the grain. This reanimation is a kind of mimesis, operating signs and production structures to translate other cultures from other times. Each interpretive reading of my paint is a new situation, a new set of lines on a page and a new iteration. I want not merely the obvious, symbolic meaning of an image to be read, but the hazardous and obtuse meaning to be felt. You cannot test a spell. To utter it is to put it into effect. In this sense, my art of appropriation, understood as invocation, concerns itself with the practicalities and material gestures performed in the ceremony of invocation. My paintings become a surface of protections, receptions and projections. By making my work through and situated in the contested realm of human experience and embracing counter narratives of history, I attempt to ameliorate social and cultural loss. 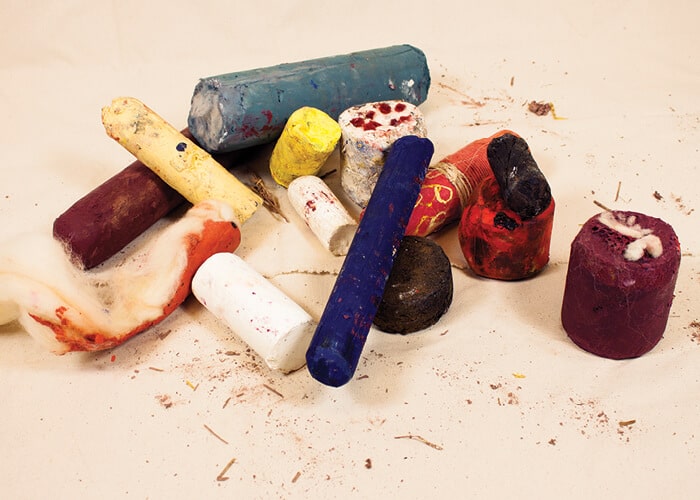 Your use of paint – from washed, flat colours to globular blobs – is very textured, your palette quite bold. What role does process and medium play in developing or enhancing these narratives?

The process of painting is essential to the production of my work. There is a magic, ruptured communication that occurs in my crowded studio between material, mark and me. Paint is adapatable; it can take on the qualities of flesh, sugary candy floss or menstrual blood in different iterations. Its ability to invoke works hand in hand with the subject’s the paint depicts. I use the visceral colours, predominantly the colour red, throughout my practice because colour has an immediate and visceral response felt in the body. My colours carries traces of blood, of a STOP sign on the street, of life, sex, love and death; colour communicates directly as both synthetic and animal. My work investigates how the stuff of the earth (minerals) and of mind and spirit (mythology and sacred knowledge) is brought to the surface, where it undergoes a fundamental transmutation into secular and spiritual currency. My intimate canvases, a connection of loose threads, are sacred grounds of healing for me. The drawn mark on canvas restores but can also slaughter, cut open or suture, honor or parody. The first drawings on caves used ochre as the primary pigment, because it can be mined from both the earth and the body. The body is a principle factor in my art production. I am a very physical painter and fibre maker. I use my weight to sculpt representations as sacred and profane; open to be taken in and like pornography satiate a desirous lust. The paint constructs miniature theatres through protean linkages. These linkages help me map and inscribe my social relations, specifically of displays and negotiations of power that are recursively engaged in their own bodily reproduction and reconstitution.

Please tell us about the work that is going to be on show at the FNB JoburgArtFair? What inspired it?

I will be showing a series of painting tapestries under the banner ‘Cave Canem.’ This latin phrase means ‘beware the dog,’ a term that vividly refers to security signs that pepper Johannesburg’s suburbia. The term also refers to a cave; a place for shelter and storage, like a fair booth, and ‘to cave,’ is a term that conveys surrender and collapse. The paintings deal with the idiosyncrasies of traditional and modern rituals of South African cosmology bumping up against each other. The work within the booth deconstructs notions of the modern and ancient African marketplace. In both local and international settings, the marketplace is a hybrid mix of people, tastes, and objects convening together. Whether a nut roasting stall in Senegal, Chinese bric-a-brac apparel advertised in LED lights, or online trading across continents, the marketplace is a symbol of traditional rituals living alongside contemporary beliefs. It is also a marker of gentrification and cultural appropriation, where market audiences push out local businesses under the swift and unyielding machine of capitalism. My paintings exist as both apparitional forms – referencing memories, dialogue, and movements – and possess kitschy, eccentric materiality. Casting a backdrop more vivid than the white cube, the booth as a marketplace proposes an experiential connection to storytelling, economic exchange, and the ritual of cultural performance. This stall proposes an opportunity to visually resolve and represent such complex issues as race, feminism, and cultural borders being surfaced by crossover genres. By allegorising the everyday and the mythic in the same space, a visual narrative emerges from intersectional perspectives.