“Gates of Horn and Ivory”

“GATES OF HORN AND IVORY” 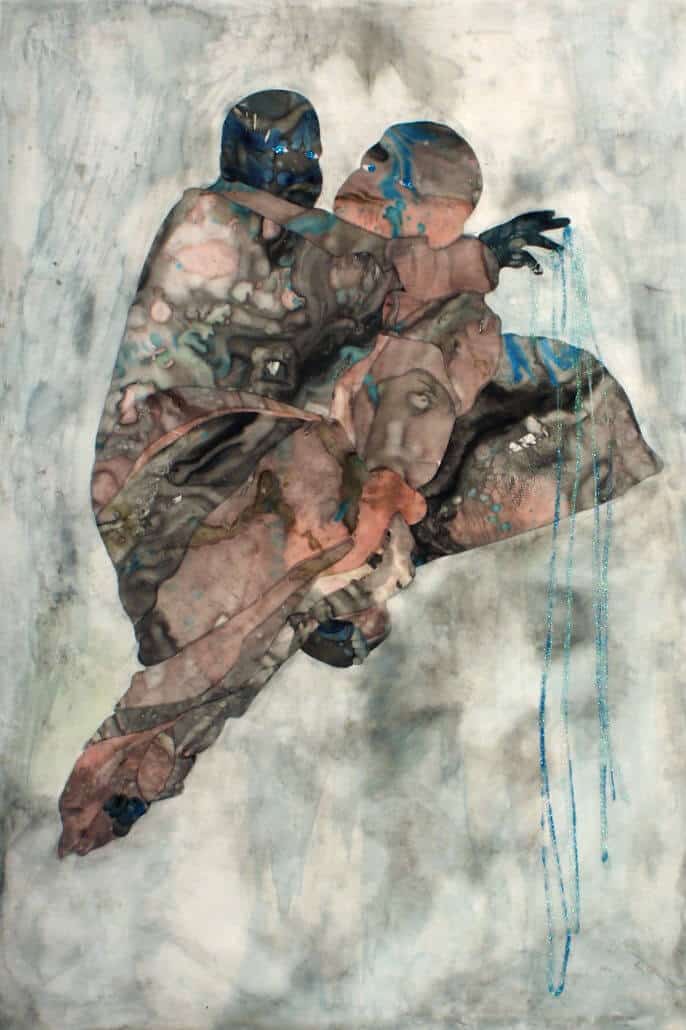 Earthy reds and browns mingle with soothing blues and greens to create swirling, dancing figures amidst sumptuous textiles. Then there are dreamy, floating women – rendered against marbled, inky skies, at once substantial yet ethereal, buoyant in smoky spires.Elsewhere, children stand against sombre backdrops. Against the velvet darkness they shine with life, adorned in fantastic costumes and headpieces, the light catching on them in bursts of colour. Gates of Horn and Ivory (11 August – 23 September) at Kristin Hjellegjerde Berlin presents the works of Florine Demosthene, Lizette Chirrime and Iwajla Klinke. Through their diverse yet complimentary practices, identities are parsed and reworked, while the title takes its cue from Ancient Greece, a time when true dreams and false were seen to pass through horn and ivory respectively: what we see may beguile as equally as it may enlighten.

The work of Cape Town-based Mozambique artist Lizette Chirrime is at once empowering and therapeutic. “I grew up under very harsh conditions, angry and afraid of life and with no self-esteem,” she says. “These abstract forms evoke the human body and my identity-responsive practice is where I refashion my self-image and transcend a painful upbringing that left me shattered an broken.” Creating large-scale, abstract textile pieces, she very literally ‘re-stitches’ herself back together to create liberated, uplifting figures dancing on the canvas. “These figures bring to mind well-dressed African women celebrating,” she says. “My work is guided and influenced by water, the female, and a combination of happiness and sadness.” Chirrime’s work also reflects her strong connection to nature. “In a sense, woman is a soul that bares a fruit called the human,” she says. “If the soul is neglected, so too the soil bares disconnected fruit. This disconnection leads to neglect, to violence. We need to be reminded that we are made to love, to nourish light and hope. Nature, beauty, life and death: they are all interconnected.”

The work of Haitian-American artist Florine Demosthene also takes as its starting point the female body as well as belonging. In deconstructing images and then building back up, she reimagines a new kind of black heroine. Using a mixture of ink, charcoal, oil stick and glitter, she depicts voluptuous, curvaceous bodies that simultaneously appear weightless – floating, as if viewed from below, transcending to some higher plane. In the words of writer Ayodeji Rotinwa, “These otherworldly women hover over a dystopian world of decay and destructions; they may have the power to divine the future, move across time, heal.” Demosthene’s use of ink, which she then carefully blots, a process off application and stripping away, suspending our preconceived notions of what a heroine is. “Who are you when you strip all the stories you have been told away, stories you have taken on as truth?” she asks.

Finally, still dealing with the body, but with more of a focus on cultural expression, ritual, adornment and costume, Berlin-based Iwajla Klinke works predominantly in photography. Her subject matter is diverse, taking her on travels across the globe as she is interested in everything from the Bird Wedding of Eastern Germany (held to mark the end of winter) to Holy Week in Sicily. As writer Simone Sondermann explains, “the deep seriousness and the proud stance of those portrayed in Klinke’s images are reminiscent of the portraits by late 19th century studio photographers or Golden Age painters.” When it comes to subject, Klinke is interested in what she refers to as “the difference between universes of childhood and adulthood,” and focuses on “the crossing, ending, leaving and passing from one to the other.” In her portraits, highly adorned children represent “rites of passage, captivated within and celebrating the cocoon of childhood while facing the outer world.”Here, she presents works taken in Mexico and India, her subjects photographed against a deep black background, illuminated softly by natural light to create classical-style portraits that are at once completely contemporary.

Together, these three artists create a space in which identities are explored and examined, rebuilt, reforged and cherished. Amongst an ever-changing world, which cultural signifiers are constantly in flux, they challenge our preconceived notions of beauty and guide our dreams, either through horn, or through ivory.

About Lizette Chirrime
Lizette Chirrime was born in 1973 in Maputo, Mozambique, where she grew up and attended commercial school until the age of 17. Creating artworks using paint and sewing has always been an important pastime for her and she never received a formal arts education. In 2004 she was invited to participate in her first solo exhibition in Mozambique and in 2005 she accepted a residency at Greatmore Studios in Cape Town, South Africa. She creates large-scale textile-driven works on rendered in a collage of printed fabrics, from Tshwe-tshwe to other so-called African prints associated with dress on the continent. Recent solo exhibitions include A Sinfonia da Alma Liberta II (Sounds of a Free Soul),WORLDART Gallery, Cape Town (2016), and group exhibitions include Cape Town Art Fair (2018), Essence Festival, Durban; Dress Code, Gallery MoMo; 35,Lizamore and Associates, Johannesburg and 1:54 London (all 2017) and Womens Work,National Gallery Cape Town (2016). Chirrime lives and works in Cape Town.

About Florine Demosthene
Florine Demosthene was born in the United States and raised between Port-au-Prince, Haiti and New York, earning her BFA from Parsons the New School for Design in New York and her MFA from Hunter College, City University of New York. She has exhibited extensively in group and solo exhibitions throughout the USA, Caribbean, UK, Europe and West Africa, with recent solo shows including The Burst, Nafasi Art Space Gallery, Dar es Salaam (2016) and The Capture, Gallery MOMO, Johannesburg (2015). Her work was featured in the premiere issue of Arc, a magazine dedicated to highlighting emerging and established Caribbean artists. She is also a 2012 Keyholder resident at the Lower East Side Printshop in New York City and was a Guest Artist for the 2014 Dakar Biennale. She is also the recipient of a Tulsa Artist Fellowship, Art Moves Africa Grant and a Joan Mitchell Foundation Grant. She resides between New York, Accra and Johannesburg.