Indexed between track #11 (“Love You all the Time”) and track #13 (“Jesus”) on Georgina Gratrix’s oil Playlist (2011), Versailles synth-rock band Phoenix’s song is an apt source for her My Show. The more than fifty paintings exhibited converge as a resurrected Myspace account where sardonic soppiness meets melancholic buffoonery in a travesty of self-interest(s). 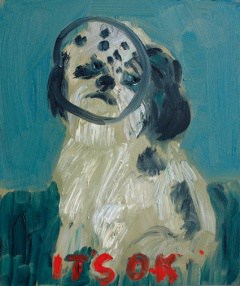 Most of the works are caricatures in the Latin sense of carricare (“to load”) – charged, comic likenesses – functioning as exaggerations, as in BFF (2012), a colossal portrait of Gratrix’s childhood best friend. The bff’s outsized head has iris-only eyes and an ingot-shaped snout for a nose, becoming a de-heroised monument to friendship. Yet Gratrix is not essentialising her subject: assembled from Facebook-culling, her portrait is an archaeology of a complex, personal relationship. In this regard, she also, almost childishly, lays claim to the portrait by inserting a caricature of herself into the bff’s forehead as The Mexican (2010), or Inner Brat (2012) – two self-portraits elsewhere in the show. This is a leitmotif: portraits of others, as if possessed, turn into self-portraits.

Man’s best friend is the subject of It’s OK (2012), a painting of a pooch from a puppy calendar accompanied by the text of the title. Looking forlorn in blue hues, the mongrel cries out that it is not ok, becoming a receptacle of breakup woes and calling to mind expressions such as “throw someone to the dogs”, “you can’t teach an old dog new tricks”, “dog eat dog”, “as sick as a dog” and “every dog has its day” (this just isn’t it). Gratrix engages here with cute as a sublimation of violence, a self-protective fantasy extended to the sentimentality of Seven Rainbows (2010). Stretched over six canvases, these rainbows are made by Gratrix cleaning her palette knife, a playful act capturing, the utopia of painting itself. Messy, monochromatic and acidic, they are more akin to the bathos of Cezary Bodzianowski’s Rainbow (1995), than Caspar David Friedrich’s Landscape With a Rainbow (1810). At the end of the rainbow is disillusionment, as Gratrix reveals in Come on Over Baby (2011), a rainbow without the cold half of the colour spectrum. Painted over the text of the title, the canvas now only reads “COME ON”, in a gesture of deadpan romanticism.

Incredulity of another kind transpires in three flower paintings, a maligned genre that Gratrix tackles tongue-in-cheek in a narrative of love lost. In I Love You all the Time (2011), a zany bouquet euphorically towers out of its shallow vase, the carnality of the paint resplendent.