in AFRICAN ART, CONTEMPORARY ART, EXHIBITION, GALLERY, IDENTITY, MIXED MEDIA, PHOTOGRAPHY, PRESS RELEASE, VISUAL CULTURE
Share on facebook
Share on twitter
Share on email
Share on whatsapp
For its end-of-year ‘Summer Show’, Goodman Gallery Cape Town has gathered together a selection of important pieces from both new and existing bodies of work. Taken as a whole, the show presents a textured and vibrant series of engagements with the artists’ social and political environments through photography, sculpture, drawing, prints and video. The exhibition serves as an opportunity to show works not yet seen in Cape Town, and to introduce visitors to artists newly represented by the gallery. 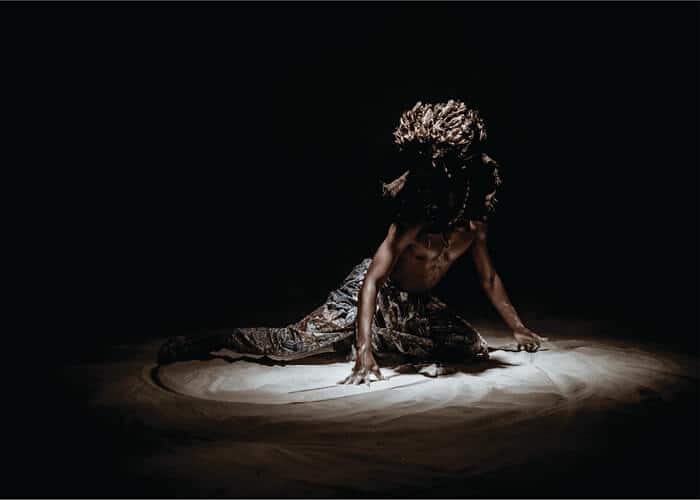 Despite its title, David Golblatt’s A family picnic in the north-west, 15 August 2009 focuses on a macro view of the landscape and the structures in which this human scene is taking place. The photograph illustrates Goldblatt’s change in narrative style since shifting to working in colour. As writer Christoph Danelzik-Brüggemann says in the book Intersections: “In parallel with a continued emphasis on striking human situations, in landscapes [Goldblatt] developed a visual language that accorded more meaning to space than to time. The formats became larger and a plethora of extremely precisely recorded details (blades of grass, stones, person) combined to form tableaux which the viewer’s eye can explore at leisure. As an overall picture emerges from these details, the viewer becomes aware that the image tells of our times, of the people who live in this land, and of the forces that shape it.”

Walter Oltmann’s Bristle Disguise uses woven aluminium and razor wire to reference local craft traditions. Covered in spikes that recall both the elaborate dress often used in ritualised African dance and the pulsating energy radiated in the activity, his bodysuit merges craft and art. Oltmann has researched and written extensively on the use of wire in African material culture in South Africa and is deeply interested in the influence of these traditions in contemporary South African art. “In my sculptures I use images of natural phenomena (human, plant and animal) and play with the idea of mutation, hybrids and reconfiguring the familiar. Through dramatically enlarging and/or transposing features of one to the other, I play with the paradox between vulnerability and the monstrous. Using the language of craft, my artworks are always a product of labour and time,” he says.

In 2005, American artist Liza Lou first travelled to South Africa to initiate an art project with Zulu bead workers. Starting with twelve women from the surrounding townships of KwaZulu-Natal, Lou’s project has flourished and has now grown to a collective of over twenty-five artisans. Her commitment to this community of Zulu women and to exploring the process and testing the limits of her chosen material has led to a minimal, contemplative practice in which the material has become the subject. Untitled #13 is a prime example of the end result; a formal object that, through subtle imperfections, bears witness to the manual labour and personal investment at stake.

Country of my skull was one of the installations included on The Brother Moves On’s solo exhibition, ‘Hlabelela’, at Goodman Gallery Johannesburg. The exhibition questioned each member’s personal histories, cultural background and beliefs as a means of unsettling the idea of a homogenised black experience and its acceptance by white art institutions and discourse. The performances, installations, and videos explored the complex identity of black youthful opposition but also questioned whether these contemporary traditions can exist within the established traditions of art institutions and art discourse. 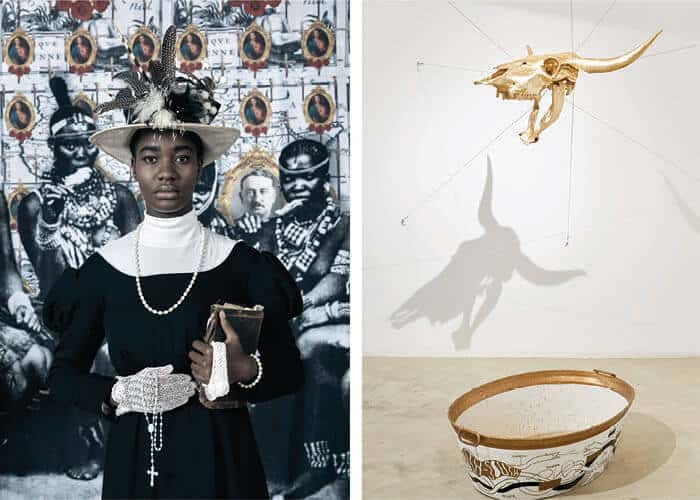 Lisa Brice’s Well Worn 5 was part of a body of work that featured a cast of female protagonists engaged in autobiographical acts of looking and being looked at. Grooming, making up, stripping down, dressing up within the confines of domestic, private or veiled interiors, they range from depictions of adoration and loathing, to defiance and reinvention. The mirror reflection reoccurs as a central motif, simultaneously functioning as an alter-ego and an imagined audience beyond the private, as well as a formal device within the painting.

In Life Magazine, April 19, 1968, Alfredo Jaar deconstructs a renowned photograph of Martin Luther King’s funeral that provides a stark visual essay on the racial prejudices that lead to King’s assassination. The work typifies Jaar’s interest in the politics of images: their effect on modern society ”bombarded by thousands of images without warning, without mercy, containing messages of consumption crafted by marketing and communications experts”. He directs the viewer to the parts of the visual experience that they may not have considered in their reckoning of who has power, who does not, and why.

Samson Kambalu’s Nyau Cinema consists of site-specific performances captured on and made in conversation with the medium of film. Born in Malawi and now based in London, Kambalu regards his work as a form of playful dissent that fuses the Nyau gift-giving culture practised by his Chewa tribe with the anti-capitalist Situationist art movement. “In my tribe, the Chewa, excess time and resources are not sold; instead it is squandered in ‘useless’ activities such as the arts, finerals, initiations etc – all led by Nyau masks,” he says. “The role of the Nyau mask is thus to orchestrate the giving of gifts,” which in a capitalist culture, he explains, would be considered the squandering of surplus time and wealth. He invokes the concept of “Gule Wamkulu” (literally the “Great Play”), a ritual masked dance performed by the Chewa, which he describes as “really the creation of ‘Situations’, where a gift can be given without incurring a debt”. 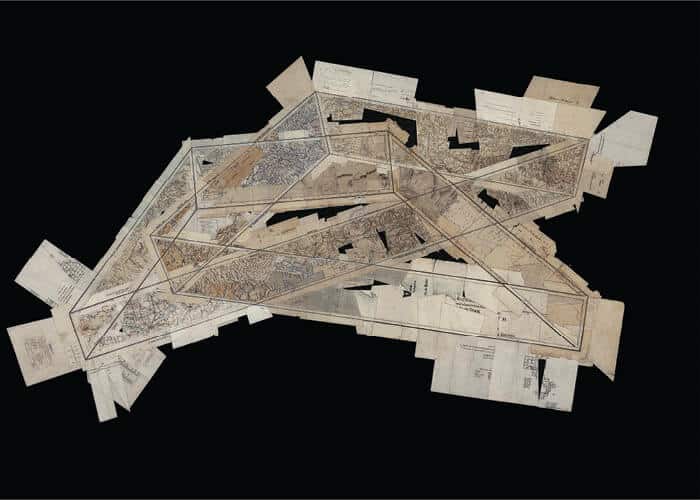 Gerhard Marx’s Transparent Territory series consists of drawings that have been constructed from the fragments of decommissioned and discarded terrestrial maps. The focus in these works is on the act of taking the flat, rectangular depictions of landmass and territory (which maps are intended to be), and reconfiguring them into mineral-like geometric constructions in which folds, facets and overlays construct spatial illusions along with a sense of depth and interiority within the flatness of the map. The series takes inspiration from early depictions of perspectival illusion, most notably Giotto’s clustering of architectural structures. The works also burrow into the flatness of geographic depiction through an act of ‘cartographic mining’, in which the solidity of the earth’s surface is ruptured into a transparent palimpsest of geography and historical time that undermines the authority and singular viewpoint of the two-dimensional map.

Kudzanai Chiurai’s Genesis [Je n’isi isi] IX and XI, from his photographic series of the same name, recount the stories of the men who ventured with Livingstone into unexplored territories in central Africa. They included other Europeans who sought similar adventures and the porters and guides who bore the weight of their supplies as well as slaves freed from Arab slave traders. It re-imagines Livingstone’s journey with the guiding principles that Christianity and commerce were inseparable.

Drawing is at the heart of William Kentridge’s artistic practice, forming the basis for works in other media, particularly film. South Africa’s preeminent contemporary artist, Kentridge has earned international acclaim for his layered and complex work, which includes operas, theatre productions and films incorporating his own sculpture and drawings as well as collaborations with dancers and composers. Waiting for the Fire, a large-scale drawing in Indian ink, illustrates his facility as a draughtsman, clearly evident in the animated charcoal drawings that first brought him to the world’s attention. 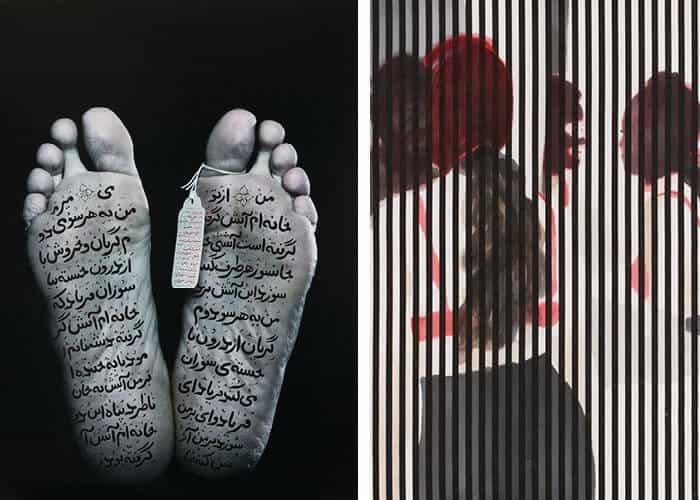 Muhammed (Patriots), from The Book of Kings series, by Iranian artist Shirin Neshat, is named after the ancient book Shahnameh (The Book of Kings), a long poem of epic tragedies written by the Persian poet Ferdowsi between c. 977 and 1010 AD. It retells the mythical and historical past of Greater Iran from the creation of the world until the Islamic conquest of Persia in the 7th Century. The black and white photographic series depicted Iranian and Arab youth and were divided into three groups: the Masses, the Patriots, and the Villains. In this work and the later Hassan, from Our House Is on Fire series, calligraphic texts and drawings from Shahnameh as well as from contemporary Iranian poetry are inscribed over each subject’s face and body. Meticulously drawn, the texts link the current energy of contemporary Iran with its mythical and historical past.

In Untitled (Influx I) Gerald Machona has collaborated with Mozambican choreographer Guiamba to create a performance-based installation that seeks to transform migratory objects and garments. A Zimbabwean now living in South Africa, Machona’s work has dealt repeatedly with the theme of migration. Crucial to this artwork is an attempt to disrupt the 55-minute hour scheme used by Cape Town garment factories, where an assembly line of seamstresses was governed by a clock that would run 55 minutes of production and 5 minutes of recess every hour. Rather than rely on a clock to keep time and a metronome to indicate tempo, the artists have drawn rhythm from a sewing machine to stitch together the dance and installation.

Every year Jessica Webster dedicates some time to working as roughly and freely as possible with ink and bleach on paper. “By now I have amassed a huge stack of A3 works, but I see this set of earlier pieces as some of the most successful.” Using ink and paper allows the artist “to get back in touch with some of the fundamentals of my practice: this is the relationship between the two-dimensional surface and the imaginary spaces that composition orders,” she says. Inks 1-15 references Sol Le Witt’s series of drawings Variations of Incomplete Open Cubes (1974). “While Le Witt’s work is interpreted as symbolising the purely visual metaphors of rationality and the Enlightenment subject, my painted copies evoke the more fragile and unstable aspects of geometry. Using Le Witt’s series as readymade references me to focus on how the bare minimum of painterly strokes can create conflict between the sense of depth caused by geometrical perspective and the fluidity and gesturality of hand-painted lines. In some of the works I continue this investigation with other objects, provoking the imaginary sites upon which geometry and order comes to be projected.”

‘Summer Show’ will be on show at the Goodman Gallery, Cape Town from the 15th December to 14th January 2017.