Graffiti South Africa: An Interview with Cale Waddacor on His New Book

Graffiti South Africa is a new graffiti and street art book by Cale Waddacor; the first book to showcase South Africa’s graffiti on the international stage. The book complies a complete documentary record of the history of South African graffiti through hundreds of high quality pictures in all major cities, from walls to trains, and action shots, as well as interviews with top South African graffiti artists, including Rasty, Falko, Mak1one, Faith47, and Mars. ARTsouthAFRICA spoke to the author about the launch of this important archive. 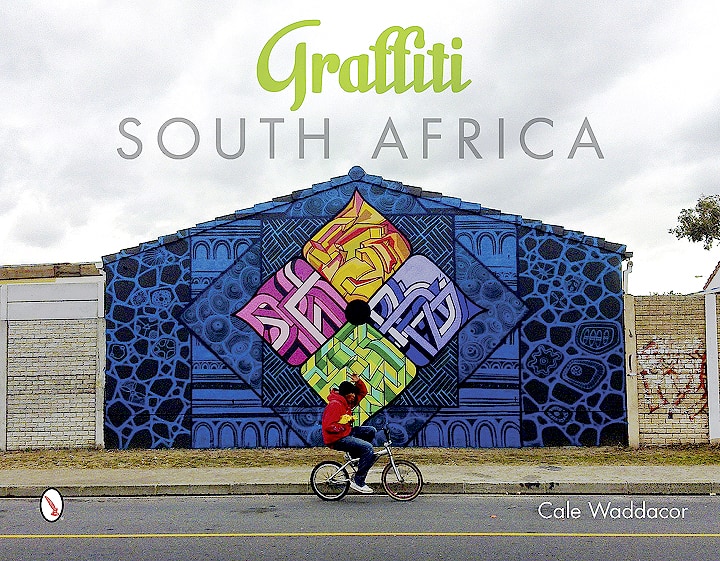 ARTsouthAFRICA: Why did you think it was important to create such a comprehensive record of South African graffiti art?

Cale Waddacor: I have been a passionate follower of global graffiti culture for many years, collecting books and following blogs regularly. No one in South Africa was documenting our scene properly and there has never been a comprehensive written record of the history of our country’s scene. As I was witnessing the local movement grow at an immense rate, I developed an intense urge to keep the ephemeral works alive. A book was the best way to do this.

What role do you think graffiti has to play in society? Do you think it can be utilised to bring about positive change?

CW: Graffiti has many roles to play in society and yes, one of those roles is to create positive change. I’ve seen graffiti impact poor or forgotten areas and communities in a very inspiring way. The colour, for one, brightens up the lives of those who see it, although many often question the meaning behind it. The content of the mural can also create a dialogue which can reach people that the artist may never meet. The creative freedom that graffiti has is also very different to any other art form; it lets people with less artistic talent find a way to develop a relationship with the arts. Graffiti is also a great social tool as it brings people together from all walks of life.

While many of us are aware of the wealth of graffiti art in South Africa, very few people know all that much about the origins of the medium in our country. What did you learn about the local history of graffiti art?

CW: I had always heard the basic story of the origination of graffiti art in South Africa and how it grew − from the Cape Flats in the early 1980s to Johannesburg and elsewhere with the growth of the hip-hop movement − as I have been involved in the scene for some time. I took what I already knew and thoroughly researched the topic, interviewing prominent artists and finding those from the ‘old-school’. I learnt a lot on the journey and was particularly fascinated by the early days as there was very little recorded documentation available from this stage.

What do you think the future holds for South African urban art?

CW: The future for South African urban art is very, very bright. We have some amazing artists who are getting better each day and all can compete on the global scale. International artists are also very eager to paint in our beautiful country, which lifts the standard even higher, especially for young, up-and-coming graffiti artists.

Graffiti and street art is being picked up by business owners and corporations, creating jobs and putting graffiti in a positive light. Graffiti festivals and street art tours are starting to happen more often. Overall, many things are happening that didn’t exist a few years ago.

And what does the future hold for you? Do you think you’d be interested in exploring urban art in other African countries? Personally, we would certainly love to see that book!

CW: I am interested in many things, from music to film and photography, but graffiti has been my main love for a while now and will continue be. I’d love to grow our graffiti scene and host some of my favourite international artists.

I will continue to run the Graffiti SA website and actually have a very strong interest in our continent’s graffiti scenes. I love seeing graffiti in other parts of Africa and would really love to shoot Festigraff in Senegal this year, as well as get to Djerbahood in Tunisia. I hold a very strong love for Africa and would love to do a book on our continent’s best urban art – in the meantime, check out my blog on African graffiti and street art.

For more information about the book, have a look at the dedicated webpage. There will be book launches and parties happening soon, the first in Cape Town at the end of January at Side Street Studios, so stay tuned!