HAIL! The Dark Lioness. Is being published in three parts. Read Part 1, here.

What if I were a liar and could not help myself

What if I forgot your birthday and didn’t care

What if I was suicidal and just left you behind

Would you still love me if I forgot who I am

Would you still love me

Could you still love me

What if lost the ring you gave me on our anniversary

Could you still find it your heart to care for me

What if I turned to the part that set me free

Or gave it to her when she forced herself on me

Would you still love me

Could you still love me

Don’t think about what if

Just know that your love’s enough form me

It will always be

Ohh, ohoooooo oho, it will be

I know you’d still love me

(You know I’d still love you)

I know you’d still love me

Lyrics for What If by Kelly Khumalo feat. Jono Johansen 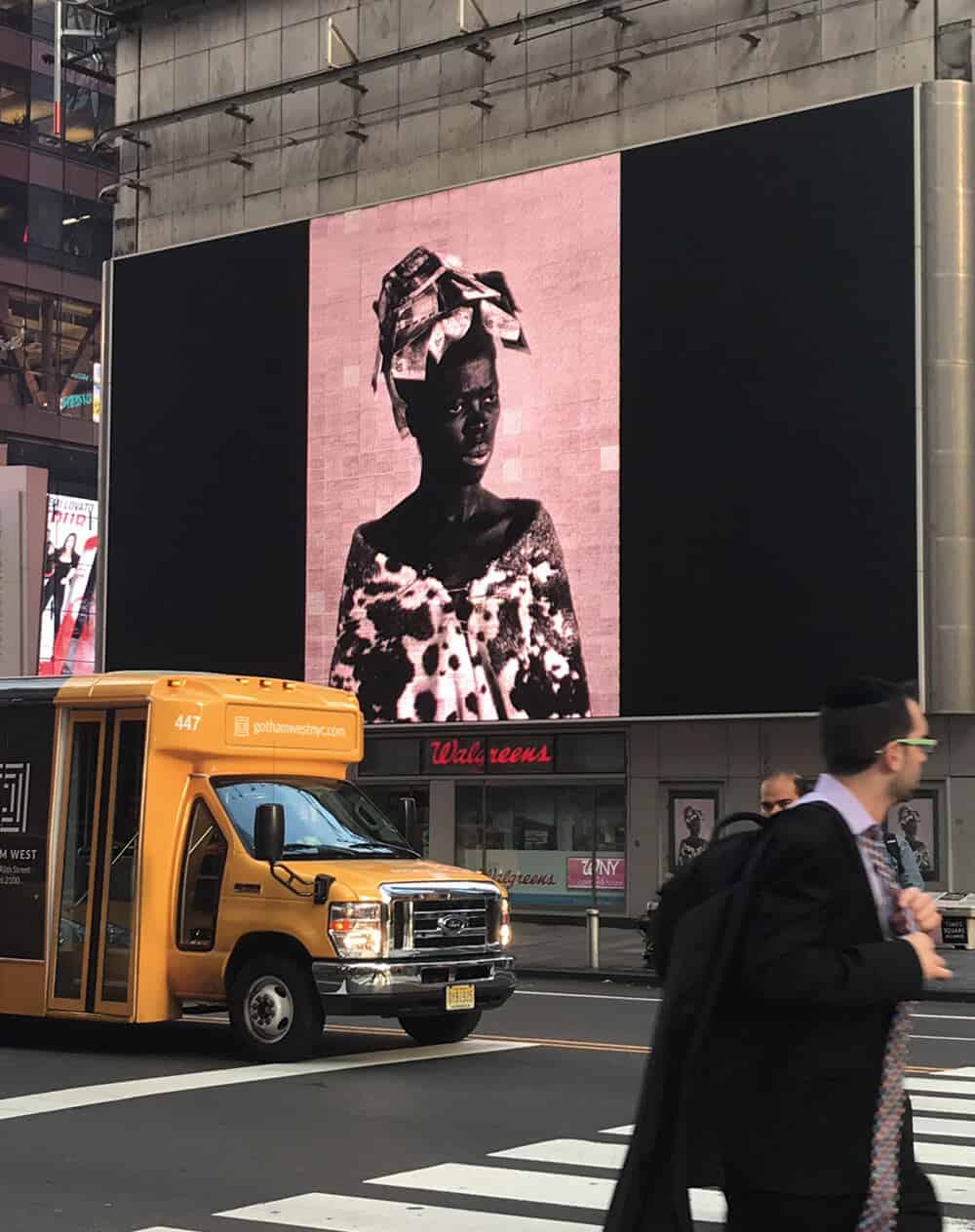 This is all part of art, you know. We tend to forget about that, so now I’m just changing the whole thing – listen to the music that I like!

I’m Zanele Muholi. I live and work in Cape Town, South Africa, and I’ve been working with Stevenson for seven years. I did not just start at the gallery – Sophie Perryer, who works at Stevenson, discovered my work at a conference held at the University of the Western Cape, and when I met Michael Stevenson, he gave me a chance. Nobody knew I’d be here today – nobody even thought I’d make it this far, but Michael took a risk with me. It’s been such a good journey to have shared with the gallery.

My work is queer. It’s mainly on black LGBTQI+ people, and by LBGTQI+ I mean lesbian, gays, bisexual, transgender and queer people, and some intersex people. That was my claim to fame, that’s where I began to shoot seriously, and also bring forth queer content into the mainstream space. Before then, there were very, very few images that spoke to the black lesbian, gay, bisexual, trans people here in South Africa – regardless that in South Africa we have the Constitution that states we have the right to express our gender, our sexuality and all.

I’ve made it my duty to produce content that spoke to me, that had to do with our own lives because I’m one of us – not one of them. And I’ve achieved that, most of the photographs or visuals that I’ve produced are used for education – the whole point was to produce content for education, and historical documentation – for people who may or may not know, or who refuse to know completely, who are ignorant, or choose to be ignorant.

Basically, what I’m doing is beyond the arts. I’m writing a South African visual history, and I’m aware that I’m not going to be here forever.

I’m just helping them see that we are also tax payers in this country. There’s one thing to have the best Constitution in the world, it’s something else to have all the milestones that we have achieved as a country. We have the best marriage document, or act, or law that gives same-gender loving human beings, and others who are members of the community, the right to marry – the civil union act of 2006.

It’s been a good ten year period where I could see the influence that my work has on a number of human beings out there – from artists, to academics, to activists, to feminists. I had a younger student come to me in Stevenson recently who told me – “I like your work, and one of my courses at the University of Cape Town is on gender, and they teach us about your work” – moving the focus of my work from arty spaces only.

This is why I call myself a visual activist, or rather a cultural activist – I’m dealing with a special culture here that speaks to a number of issues. The work is not only about the arts, and I want to do away with the arts because people tend to think that it’s all about the art. Considering where most of us come from – when you told your parents you wanted to study art, they said “where do you expect to be in the future with art?” and “How will you maintain your family with art?” For most of us, art is not perceived as something that people could survive from, travel the world with, and be respected by.

I come from a poor background. My sisters are factory workers, and my nephews and nieces don’t even know what I do because I’m in the arts. If you ask any of them if they know who Zanele Muholi is, they’ll say we’re related, but they won’t know what I do. 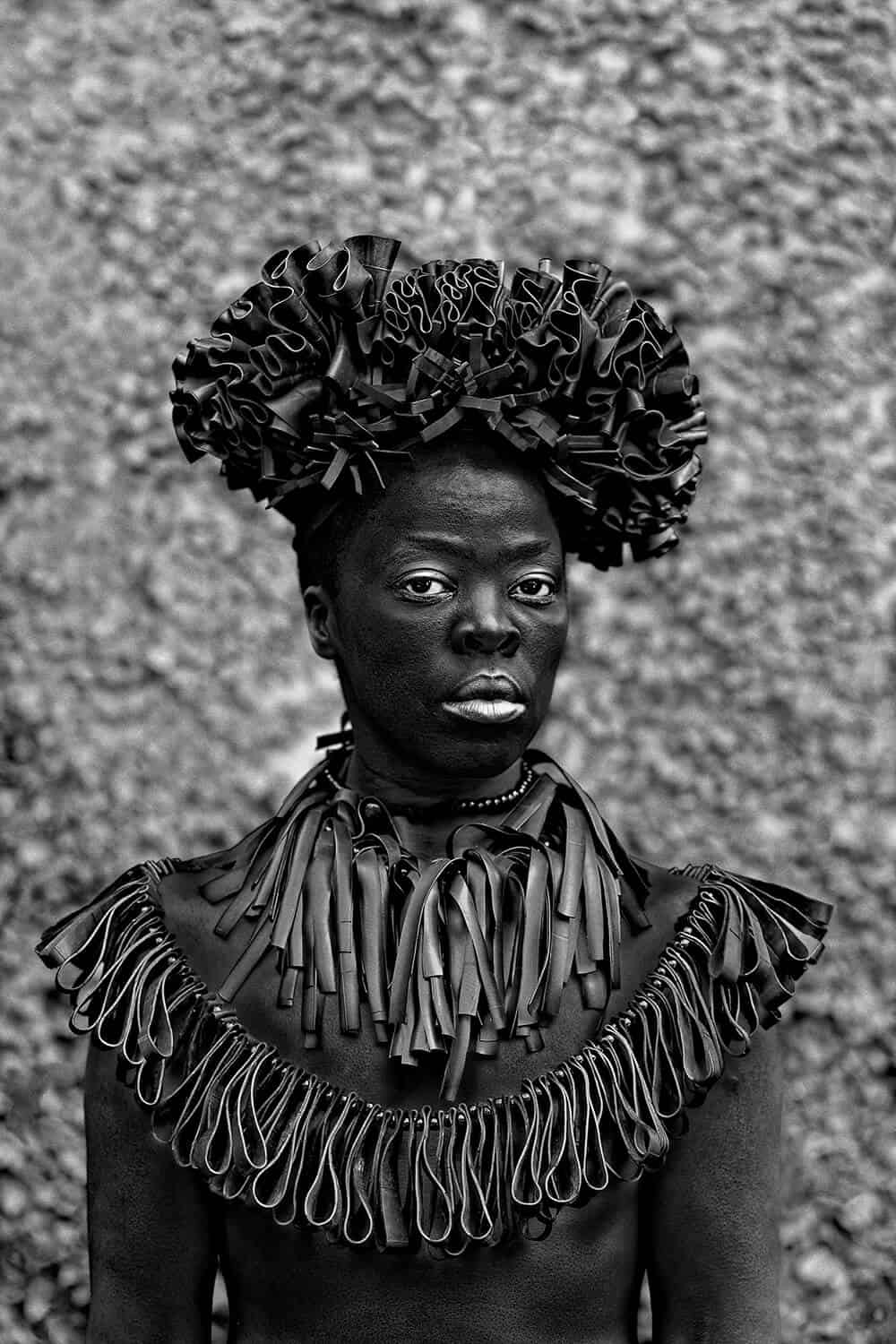 And one other thing I’d like to say about myself – which I’ve never said before, because people will get irritated – but I don’t like to be feminized. A lot of people from my community, and I’ll be blunt, but black people will say “oh hi, how are you sisi Zanele.” And no matter how excited you are to see them, you get turned off by that small comment, “sisi.” I don’t like to be genderised. I just want to be me living in this space, and you say that you’re respecting me, but you’re calling me by the feminine. The pronouns, I’m very allergic to pronouns – why can’t I just be me? Why do I have to be he, she, whatever? Maybe I’m fantasizing, but I’d like to live in a genderless society where people are just people, and there’s no limitations. The minute you call me “sisi”, it’s like you need to save me because I am a female bodied being. I don’t like to be “sisi-fied”, just call me by my first name, or my surname.

But how does this come into being? Because of the content that I’m capturing, the trans content that I’m producing where people are just people, and they have their own chosen names, trying to undo their given names. But Muholi means leader, and I’m leading in my own field – the black LGBTQI+ community.

Ellen Agnew: Earlier you mentioned how South Africa has a very progressive constitution in terms of the civil union act, you’ve travelled all over the world – 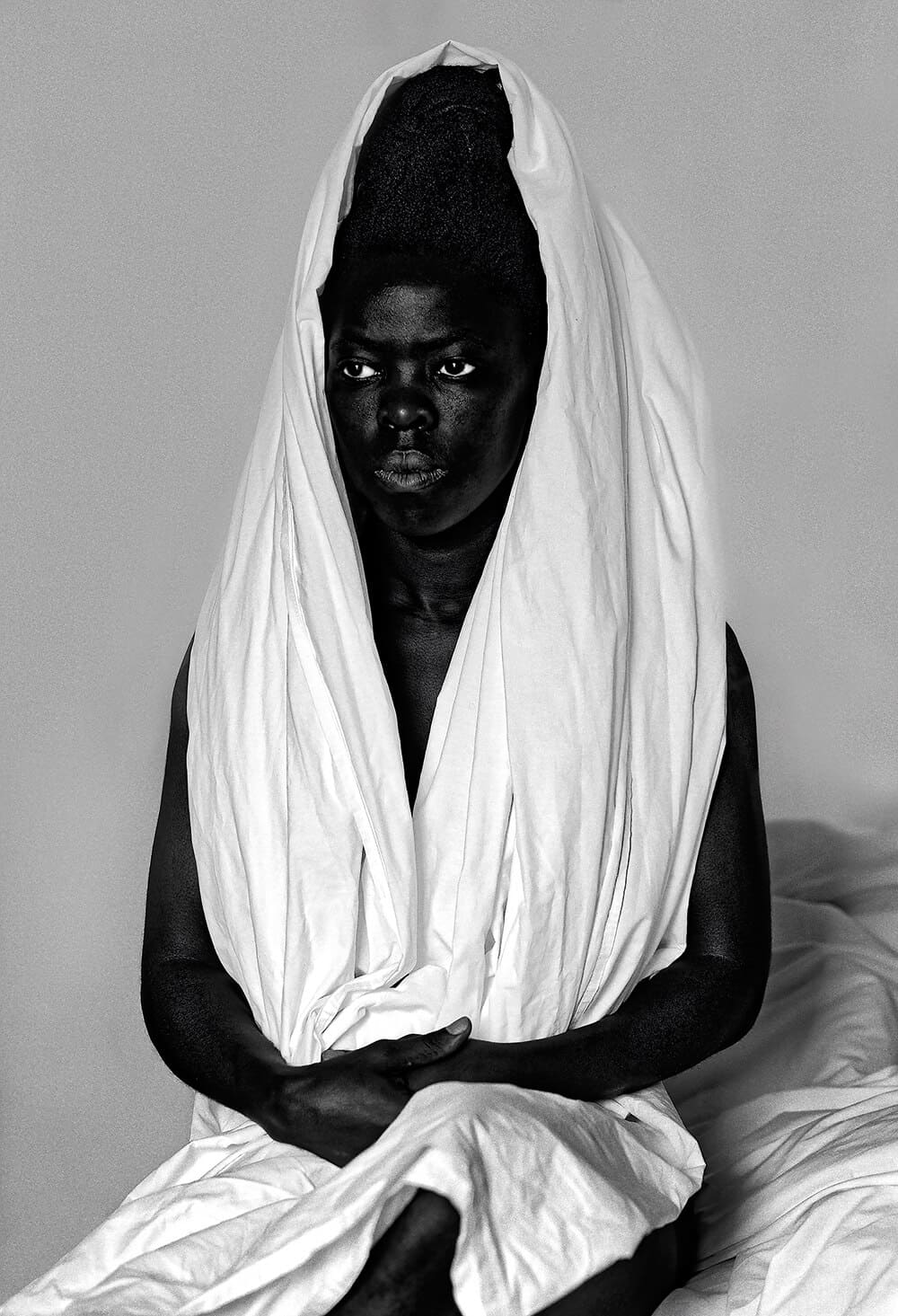 So the places that you have been to – how has the international stage impacted on your work, and where does South Africa compare in terms of their social activism, and cultural activism?

That’s a good one. I don’t like the word “compare”, because then there’s no competition. I’ll rather say South Africa in relation to America.

If you look at the status of black trans women over the last ten years in America, you’d see blood. It is so unfortunate, and it saddens me when we have people come to South Africa and want to save us. And yet, I so wish that I could go to America and erect a monument for all the trans women who have been brutally murdered. That’s what I intend to do in my next show anyway, which will happen in America. I create a space, with fresh flowers, for all those we have lost – as members of a community, regardless of where we are situated.

Cape Town is not as beautiful as how you like to see it, with the mountain in broad daylight. A lot of lives have been lost in this city, so when you compare people and situations, and incidents that have taken place over a period of time between two different places – when the Orlando shooting happened at Pulse, I immediately thought of Sizlers in Cape Town.

I’m planning these monuments, and activist walls which bring forth all these people we have lost, and those who were injured when these tragedies took place. 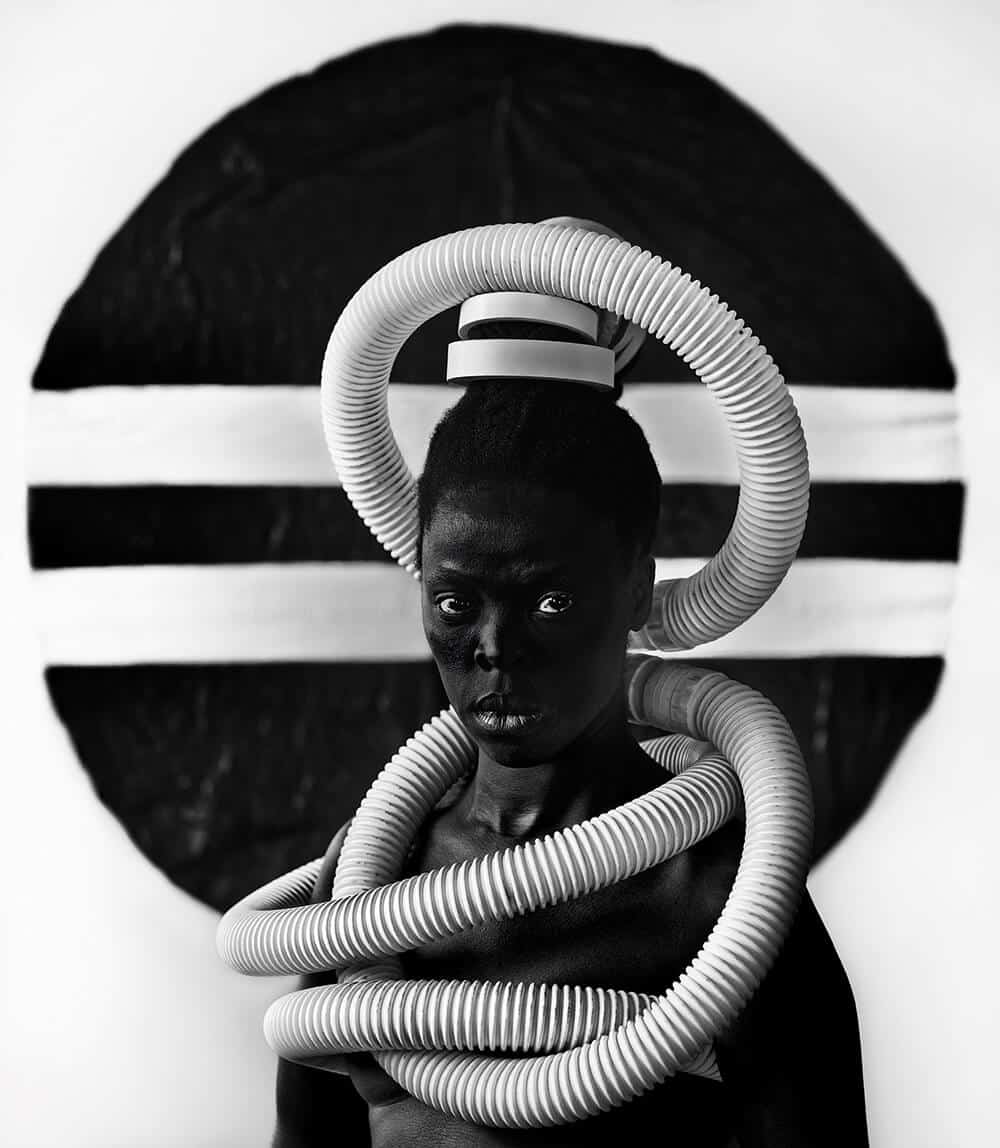 When I’m travelling, I’m not travelling for show, I’m travelling to present myself as a South African, and to say that I’m proud of my country. Don’t tell me that South Africa has social ills – we are all suffering, whether you are in Europe, or America. And when somebody is hi-jacked in South Africa, we don’t sugar coat it. We read about it in the media, as painful as it may seem, we get to read about it. With all due respect, there’s pain everywhere.

And speaking about divisions put between people – people of different colour – we have read what is happening in America. Black people being shot at and killed, you see it on YouTube, but in South Africa we have our own racism that we face, that has divided us. You are a white female, I’m me, a black somebody, we don’t know each other, but we’re living in the same country. We don’t try hard enough. You’d think that being seen with a black person is a shame, or a crime, because your friends won’t like that you are friends with me. That’s the saddest thing about the apartheid regime – and it connects us to all that is happening in the world – especially the art world – racially, now.

You went to school, you studied art – maybe. You have access to a publication company – you are living a privileged life. Surely, you’ve never been to a township? This is a problem that we have in South Africa – which surely is happening in other countries too – where black people are situated in different spaces, unless they can afford otherwise. And it’s become such a thing to see poor whites in certain spaces.

Dean Hutton actually created a stunning, honest picture of the current status of poor, white South Africans. It’s so sad, but then, I appreciate that another white human being approached the topic, from the inside, you know. For some of us who practice art, and who believe in visuals – sometimes we give it as it is, we don’t imagine how life could be.

You really, really need to speak to Dean Hutton, and understand the pronoun when you deal with them. They’ve done amazing work, and I’ve known Dean since before the transformation and the transitioning. There’s a lot – I would take a week if I were start in sections and say: talk about yourself, talk about visual activism, talk about the people in your photographs.

I’ve created a chosen family to make myself comfortable – so that’s how my visual activism works. My life is about our lives, it’s autobiographical, with biographies of black LGBTQI+ individuals – especially the people that I love, and the people that I feel. I don’t just shoot people because I think that they’re cool. I need to know who they are, and why they do what they do.

Basically what I’m doing is beyond the arts. I’m writing a South African visual history, and I’m aware that I’m not going to be here forever. I share information and I produce information – I’m producing an archive that I currently do not have access to. I don’t want my grandchildren, and those I care about, not to have access to information they deserve, and I don’t believe we should rely on queer content that has been produced by the other. We are here, and we can write, and we can contextualise and visualise our world as first persons. Do not rely on anybody. We need to be in spaces with people who respect us, who recognize our beings, our spaces, and who see us as relevant bodies. 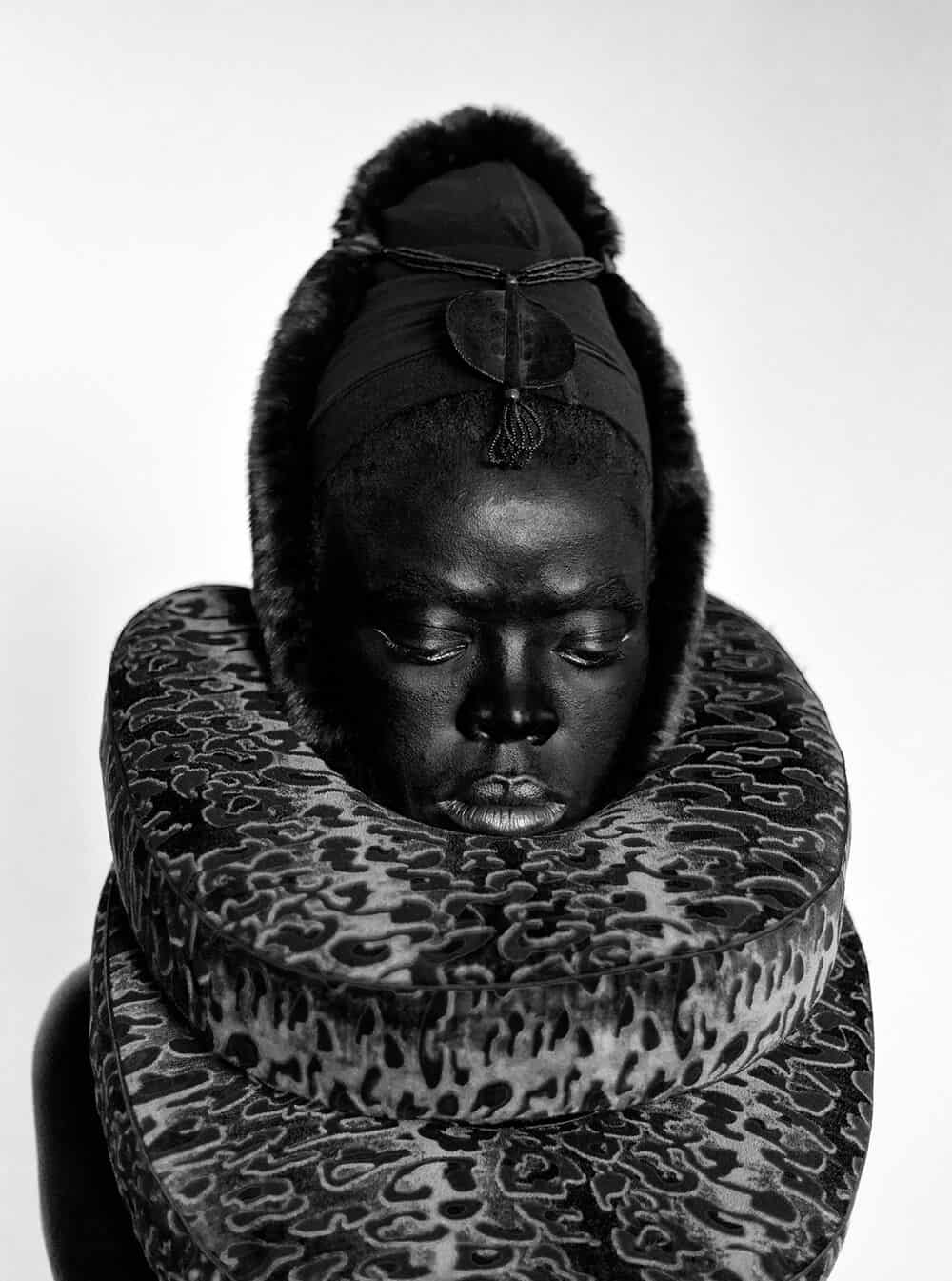 You can find this feature in issue 10 of ART AFRICA, ONE OF US, which celebrates those circumventing the fringe and speaking-up about the issues that have for so long been a part of daily existence.